With the aftermath of the Mumbai attacks and a turbulent period for Bollywood hits, Shahrukh Khan and Aamir Khan have both stepped up to give Bollywood a major boost with two blockbuster hits. Shahrukh’s Rab Ne Bana Di Jodi has been a great success. Directed by Aditiya Chopra, the film has outdone all the Bollywood […]

With the aftermath of the Mumbai attacks and a turbulent period for Bollywood hits, Shahrukh Khan and Aamir Khan have both stepped up to give Bollywood a major boost with two blockbuster hits.

Shahrukh’s Rab Ne Bana Di Jodi has been a great success. Directed by Aditiya Chopra, the film has outdone all the Bollywood movies in the  released in the recent past. Box office takings of Rab Ne Bana Di Jodi topped Rs 900 million within two weeks of the film hitting the cinemas. Yash Raj Films have something to smile about with this movie giving them their latest massive hit further to their previous big hit with Shahrukh Khan’s Chak De India and also it surpassing the initial takings by Dhoom 2, regarded as one of the highest grossing movies of all-time. The film is tipped to be one of the all time blockbuster movies of Bollywood of all time. 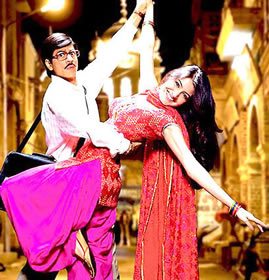 No doubt the movie will also give a major boost to newcomer model-turned-actress, Anushka Sharma, who stars opposite Shahrukh Khan, in the lead female role.  Anushka, a resident of Bangalore but originally from Dheradun in India, got the part through the conventional way via a modelling agency and an audition.  She recited some lines by Kajol from Dilwale Dulhania Le Jayenge as part of the tasks to get selected for the role.

Once getting the role of Taani,  Anushka had the challenge of acting with the superstar Shahrukh Khan. Anushka said that SRK made her feel very comfortable and allowed her to be herself, which made it easier for her to get into her role. Anushka wore very little makeup in the movie and has made her mark as a natural beauty in Bollywood.

The second Khan, to give Bollywood a boost, is the most versatile actor in Bollywood, Aamir Khan with his release of Ghajini. The movie has taken 100% takings in the first week, even giving a challenge to the first week takings of Rab Ne Bana De Jodi.  Studio 18 who distributed the film, who also released two of the biggest openers in 2008 – ‘Singh Is Kinng’ and ‘Golmaal Returns’ were extremely pleased with the figures of the opening week for the new Aamir Khan hit. 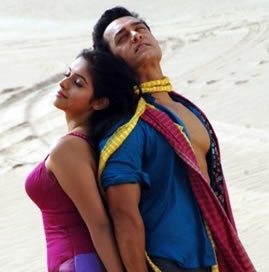 Aamir Khan who worked out heavily to develop his muscles and six pack for the role in Ghajini has already began to make a major return for his efforts with a huge reaction at the box-office. The advance bookings of tickets made the action-thriller earn over Rs 35 crore, something not heard of in the past.

The film is a remake of a Tamil hit movie with the same name and Aamir is joined by Asin, a sensational South Indian actress of Dasavatharam fame and Brit-bred Jiah Khan who starred in Nishabad opposite Amitabh Bachchan.

The film is Asin’s first Bollywood movie. But she was the female star of the same Tamil movie. Asin plays Kalpana as in the original but the Bollywood version has been changed with different sets and a change to the style of the movie. Asin has been an ardent admirer of Aamir Khan’s movies, his acting and him as a person. Ever since she was young she has seen him as an inspiring actor, so this role was a dream come true for her.

Jiah plays  Sunita, a character who is a medical girl staying in Mumbai studying brain studies at a hospital where Aamir Khan is eventually admitted. She said working with Aamir Khan was quite a good experience for her and Aamir helped her with the Hindi and Urdu dialogues.

Therefore, Rab Ne Bana Di Jodi and Ghajini with Sharukh Khan and Aamir Khan respecitvely are likely to contribute over 20 per cent of the overall box-office collections of top 50 Hindi films released in 2008. Giving Bollywood a much deserved boost after all the hardships suffered by Mumbai.

Amit enjoys creative challenges and uses writing as a tool for revelation. He has major interest in news, current affairs, trends and cinema. He likes the quote: "Nothing in fine print is ever good news."
Mumbai Attacks impact Bollywood
Slumdog Millionaire a Globes Winner