Legendary Bollywood actor, Amitabh Bachchan reacted to the surge of attacks on his country and city in his blog and has acted in a way he has never done before – “I am ashamed to say this. As the events of the terror attack unfolded in front of me I did something for the first time and one that I had hoped never ever to be in a situation to do, I pulled out my licensed .32 revolver, loaded it and put it under my pillow.”

Aamir Khan, the other huge Bollywood star and blogger said in his blog that he feels, “Shocked, heartbroken, helpless and angry.” He continued and said,

“I have been watching television since yesterday and to see various locations in Mumbai turned into a war zone is shocking and heartbreaking to say the least.”

The attacks on Mumbai have produced many reactions from Bollywood stars. Here are some insights to the experiences by the stars and Bollywood community. 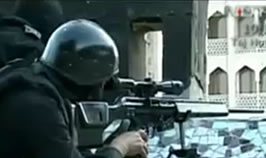 Hema Malini praised the reaction of the Mumbai police on the rescue operation and is sad that they lost officers whilst in duty. She acknowledges sadly, that Mumbai is unsafe and that more security is a must.

Bipasha Basu said that it was shocking and scary and that they were going through a very disturbing and inhuman phase. On the Wednesday night, Bipasha was close to the Vile Parle blast and being on the road she found that there was huge unrest on the roads.

Celina Jaitley was staying at the Four Seasons hotel in Worli when the attacks took place. She got calls from her security to stay put until 3 a.m on Wednesday and on Thursday stayed close to the exits before going to her room.

Raveena Tandon was having dinner in a restaurant in south Mumbai with friends when they got calls immediately to leave. Policeman called and urged them to leave  Groups of them began to leave and stayed on the phone till each of them reached home safely.

Shabana Azmi was on the phone with a friend in London when she found out about the attacks by switching on the TV. She offered her condolences to police officers who sacrificed their lives. She feels it’s a diabolic war waged on the city and country and states that this isn’t the time to place blame and every one needs to co-operate and work together.

Shilpa Shetty had no idea of what was happening as she was sleeping in order for an early shoot on Thursday morning. Having a call from London regarding her well-being awoke her to the surge of attacks in Mumbai on TV. She is sad and angry that Mumbai people are an easy target for such attacks and feels very unsettled about what has happend and stated this wave of attacks was an open war against humanity. 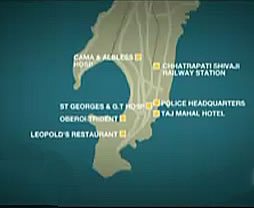 Arshad Warsi passed the area of Vile Parle about twenty minutes before the explosion took place there. He showed his faith in the Indian army and police. He said “Nothing can stop Mumbai residents from getting back to normal.” However, extreme caution was now on the agenda.

Ashish Chaudhary’s sister was taken hostage in the Trident Oberoi. On Thursday Ashish said, “My sister Monica and her husband have been inside the hotel along with maybe 40 other hostages. They came here for dinner last night, but now they are not answering any calls.” Sadly, he lost his sister in the attacks and reports state that they were shot in the leg before being shot in the head.

Kaushik Ghatak, the film director said that the industry will definitely be affected and felt this would be a major blow to Mumbai as a film-making centre for Bollywood. He said, “As it is, so many producers are planning to set up their studios outside Mumbai. Even though no place is safe at the moment, repeated attacks are making the city even more unsafe. If attacks continue, people will not shoot in Mumbai.”

The surprise and extraordinary attacks have left a dark and dreary cloud over Mumbai with loss of life estimated as of over 195 and over 300 people wounded. This will tarnish Mumbai as an unsafe location for Bollywood filming. It will without doubt instigate the need for much higher security for stars and respective crews if filming does take place.

Amit enjoys creative challenges and uses writing as a tool for revelation. He has major interest in news, current affairs, trends and cinema. He likes the quote: "Nothing in fine print is ever good news."
Bollywood supports Live Earth India
Shahrukh and Aamir boost Bollywood