Indian ‘Aunt with a Gun’ protects Girls from Sex Attacks

An Indian aunt with a gun is protecting girls from sex attacks by patrolling the streets to keep them safe. DESIblitz has more.

"I've not had to actually shoot anyone yet. But I'm not afraid of using my gun if I have to."

A woman in India seeks to protect the girls in her neighbourhood by carrying a gun and confronting anyone who tries to sexually assault or hurt them.

Shahana Begum, 42 from Shahjanpur, Uttar Pradesh in India, has taken the safety of her daughters and other girls in her own hands.

She is nicknamed “Bandookwali Chachi” (Aunt with a Gun) and has built quite a reputation for herself.

In 2013, she was said to have gotten justice for a girl raped for two days by three men. She said: “I went to the police station and told them to accept the case or I’d report them to a higher authority.”

Begum handed the men into the police.  However, the main offender eventually married the girl.

Her methods have not gone unappreciated. Girls who live in Shahjanpur are since grateful to be protected by the strength of the aunt with a gun.

“No boy dares do or say anything to us. I hear about girls being molested  and raped in other parts of the state but not here, and it’s all because they fear Bandookwali Chachi.”

Begum, herself states that she has helped many women feel safer. She acts as an intermediate between police and the family or the attackers themselves. 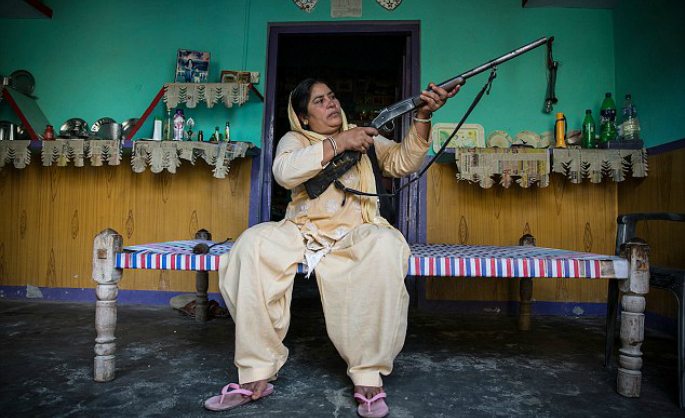 She explains: “Girls come to me when the police have failed to help them because they know I get results.”

Herself widowed 17 years ago, Begum knows the struggles Indian women face every day in a neighbourhood controlled by men.

She was left with 4 children to protect and decided to take up arms. Begum purchased a gun in 1999 and since taught herself to shoot and aim. She says: “I was scared of being attacked or killed. I’d known girls commit suicide after failing to get any support from the police. So I decided to rely on myself.”

At first, there were sceptics, but with time they understood Begum’s infinite cause.

Begum adds: “I’ve not had to actually shoot anyone yet. But I’m not afraid of using my gun if I have to.”

Rape crimes are high in Uttar Pradesh, and Begum seeks to do what she can to help protect the girls in her neighbourhood. The aunt with a gun is fearless in her approach so that no woman feels unsafe.

Why Remembrance Sunday is Important for British Asians
What are My Options for India’s Banned Money?