Why Remembrance Sunday is Important for British Asians

Remembrance Sunday is an important occasion for British Asians, marking the contributions of 1.5 million Indian soldiers in the First World War. DESIblitz reflects.

The red poppy has always held an important significance in world war history.

An emblem of past conflicts between powerful nations, poppies are traditionally worn in the run-up to Armistice Day and Remembrance Sunday.

Many British and European citizens will don a red poppy on their collars and coat lapels in order to recognise the millions of people killed between 1914 and 1918, and also in later wars.

Younger generations may remember grandparents and great-grandparents who served in these wars, or who lost loved ones. With 17 million deaths and 20 million wounded, the Great War was a globally affecting one.

One lesser known fact is the key significance of South Asian soldiers who served on the Western and Eastern Front. A total of 1.5 million soldiers from pre-partition India fought alongside British and French troops in the trenches.

They were a vital component to the war effort, and it is only recently that historians have uncovered their incredible sacrifice and recognised them as part of annual Remembrance Sunday services.

DESIblitz explores why Remembrance Sunday is so important for British Asians.

The Indian Contribution to World War One 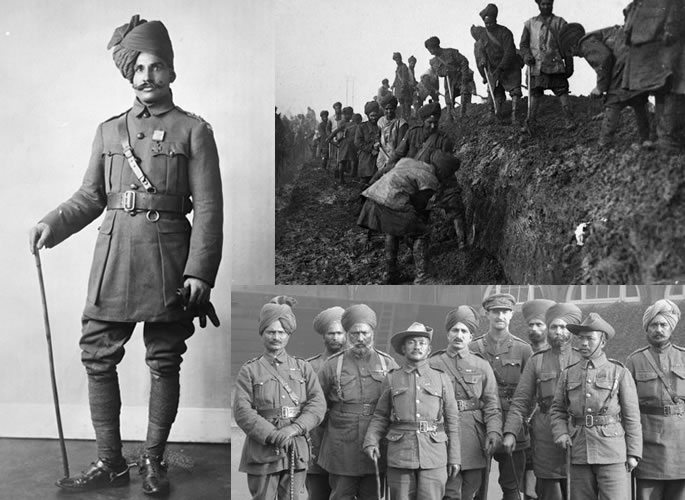 Historical Advisor Andrew Wren spoke to the BBC Asian Network about the dedicated exhibit which unveiled 11 Indian honorees of the Victoria Cross:

“It was a very important contribution. At the beginning of the war, the British Expeditionary Force, which was the British professional army was very small and it was only able to play an important role, but one that overstretched them in trying to stop the German advance into Belgium and France in Autumn of 1914.

“So, the British Indian army which consisted at that time of just under 200,000 men had been shipped to Egypt to serve in the Middle East and then they were rushed to the western front in France as it was opening up to plug gaps in the British line.”

Interestingly, about one-third of the troops on the western front were actually soldiers from the British Indian Army. They consisted of Sikh Punjabis, Hindus and Muslim Pathans. These soldiers were incredibly brave and risked their lives in the trenches for their colonial masters.

Read more about the Indian Contribution to World War One in our DESIblitz article here. 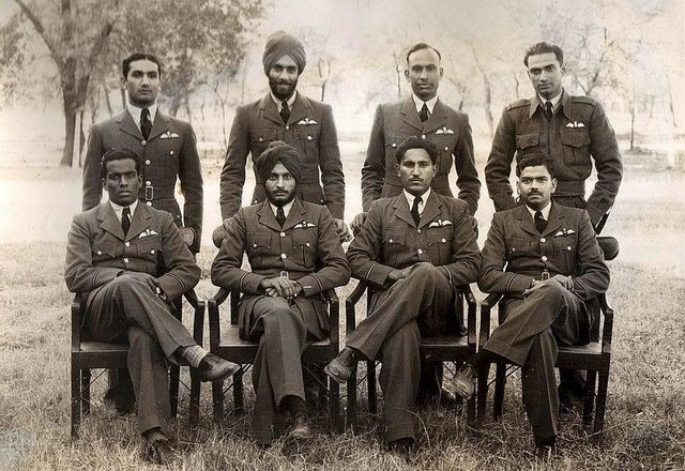 Indian soldiers even contributed greatly to the Second World War, where Hindus, Muslims and Sikhs fought together for the British in the RAF as pilots. They flew spitfires in the 1940 Battle of Britain.

Sadly, their crucial contribution was forgotten for decades. This was partly due to Britain’s wish in the mid-1900s to disassociate from its colonial territories after Imperial rule had ended.

There was also a keen embarrassment felt by both the British and the colonies about the tragic loss of life and repression that had endured for so many centuries. Indian nationalists were happy to finally get their independence, and they removed themselves from any attachment to their foreign oppressors.

For a long time, the 1.5 million Indian soldiers were simply whitewashed out of the history books.

Fortunately, these Indian men and women made their way back to the history books and they now serve as an integral part of Remembrance Day services all across Britain.

Why We Wear Poppies on Remembrance Day 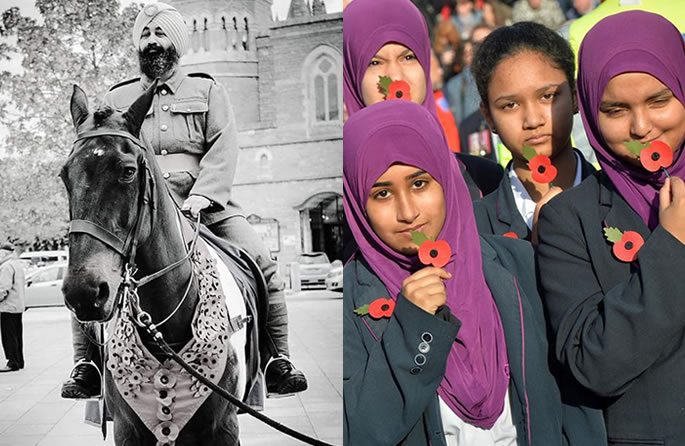 “It’s important for Sikhs and British Asians to wear the poppy to remind the wider community the contribution and sacrifices made by the Sikhs and Commonwealth.”

One of the most iconic landscapes from world history are the endless fields of poppies that stretch across the countrysides of Belgium and France. It was at these locations where the brutality of the western front claimed so many innocent lives between 1914 and 1918.

The sordid conditions in which these front line soldiers lived were gruesome and depressing at best. Some took to writing to express their distraught with the death and inhumanity around them, and many of these soldiers wrote poetry that vividly described their experiences.

Amidst all the violent chaos of muddy trenches and exploded shells and artillery, many soldiers recall the red flowers that grew out of the soil around them.

A Canadian doctor, John McCrae used these poppies as inspiration for his 1915 poem, ‘In Flanders Field’, which he wrote while serving in Ypres:

In Flanders fields the poppies blow
Between the crosses, row on row,
That mark our place; and in the sky
The larks, still bravely singing, fly
Scarce heard amid the guns below.

We are the Dead. Short days ago
We lived, felt dawn, saw sunset glow,
Loved and were loved, and now we lie
In Flanders fields.

Take up our quarrel with the foe:
To you from failing hands we throw
The torch; be yours to hold it high.
If ye break faith with us who die
We shall not sleep, though poppies grow
In Flanders fields.
– by John McCrae, May 1915

The poem was published by London’s Punch magazine. Later, an American humanitarian, Moina Michael came across the poem just a few days before the Armistice in November 1918.

She responded to McCrae’s lines with her own poem, vowing to remember ‘keep the faith’ of the fallen war victims by wearing a red poppy.

Eventually, the trend of poppy wearing was adopted by more and more people and spread to Britain and the rest of Europe. By 1922, they were so popular that the Royal British Legion created a factory to produce artificial poppies each year. This was staffed by disabled ex-serviceman and it continues to exist to this day.

Mayor of London Sadiq Khan is also a proud promoter of wearing a poppy on Remembrance Day:

“Wearing a poppy recognises the service and sacrifices made across all the generations of our Armed Forces, and provides vital support to those who are currently serving as well as to veterans and their families.” 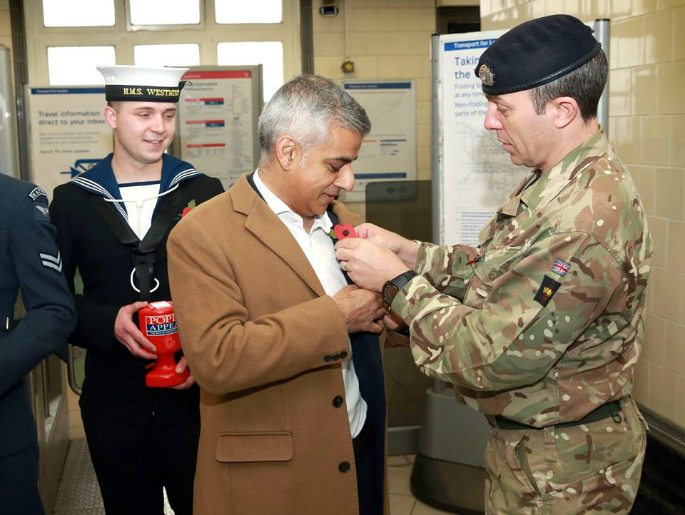 While red poppies do stem out of remembrance, in recent times many people have argued it has been wrongly used as a political toy by MPs to justify current and future wars and conflict.

28-year-old British Asian Jay explains: “I have one. But it’s controversial. Especially as it’s remembrance towards those fallen in all wars including those illegal ones.

“But there were 1.5 million soldiers from the Indian subcontinent who gave their lives for their imperialist rulers.

“So if anything, it should serve as a memory to those, and to the white British that they owe us big time.”

To combat the varying debates on poppies during Remembrance Sunday, some charities have developed different coloured poppies instead.

The white poppy for instance by the Women’s Co-operative Guild symbolises peace without violence and conflict, while a purple poppy recognises the many animals that were killed during wartime.

A more British Asian take on the poppy tradition is the poppy hijab, designed by student Tabinda-Kauser Ishaq, who wished to honour the many South Asian soldiers who sacrificed themselves for future generations. Proceeds of the printed headscarf go directly to Poppy Appeal.

Remembrance Sunday is an important day for British Asians. Memorials across the UK allow us to reflect on the sacrifices that our South Asian grandparents and great-grandparents made to ensure our future security.

The two-minute silence at 11am and the parades that follow are an essential way to honour these fallen soldiers, both men and women. Lest We Forget.