Shahrukh Khan has surpassed 22 years in the Bollywood industry. Since his first film, Deewana in 1992, SRK has become the definitive King of Bollywood; making and breaking hearts and defining modern romance. We explore the reasons why King Khan rules all.

"One cannot ignore his signature pose of opening his arms in slow motion."

As King Khan famously says: “Cinema in India is like brushing your teeth in the morning. You can’t escape it.”

The King of Bollywood, SRK holds a dear place in all of our hearts. From romance, action, comedy and playing a creepy villain, there is nothing this man cannot do.

On the completion of 22 years, we give you the reasons why he is the King Khan of Bollywood and why you cannot escape him. 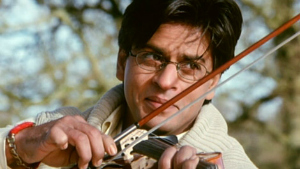 SRK is truly synonymous to romance in Bollywood.

Whether it as an obsessed maniac lover in Darr (1993); the over the top lover in DDLJ (1995); the ‘I’m so cool that I will fall in love only once, but ends up falling in love twice’ lover in Kuch Kuch Hota Hai (1998); or the ‘I will play violin till I make you finally fall in love with me and my sweater’ lover in Mohabbatein (2000). Accept it, he made you fall in love with love.

SRK has an uncanny relation with trains. If it was not for trains, we would not have had the classic, Dilwale Dulhaniya Le Jayenge (1995).

He stole our hearts when he lent his hand to ‘the struggling to catch the train’ Simran. He danced on the moving train on ‘Chaiyya Chaiyya’, the song which later almost became a train anthem.

He fought with the villains on a train to save his ladylove in RaOne (2011) and also acted in a movie named after a train, Chennai Express (2013). 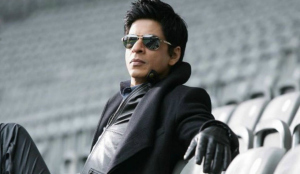 SRK lost his parents at a very young age. It’s a regret that they didn’t live to watch their son grow into the King of Bollywood. Having no Godfather to launch him, SRK is a completely self-made man and that’s what makes him special to his fans.

Moving to Mumbai from Delhi, SRK worked in TV serials like Fauji and Circus in 1989, before he got an opportunity to second lead in Deewana (1992). Since then, it has been a no turning back for SRK.

Undoubtedly the best features of SRK are his eyes, hair and his dimples. He simply hypnotises his fans with his magical eyes. If he sheds a few tears on screen, you have to wipe your tears with a towel, napkins are just not enough.

His long, windswept hair has always been a hit among his fans. He introduced the concept of hair gels to India with his hairstyles in KKHH. His deeper than the ocean dimples cause his female fans to go weak at the knees. 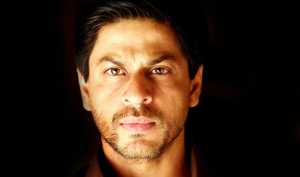 Over the years, his dialogues have been taken very seriously by his fans. If you’re from the 90’s then you have tried this trick at least once for sure – ‘Agar vo tuje pyar karti hai, toh vo palat ke dekhegi’ and gotten disappointed because it obviously didn’t work. 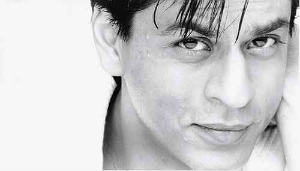 ‘Rahul – naam to suna hoga!’ SRK made the names Raj and Rahul so famous that it is hard to imagine a movie in which SRK is not named that.

Thanks to the aunties who fell for his dimples and decided to name their children the same, in every lane of India you will find either a Raj or a Rahul, and sometimes even both in one household.

Talking about his style, one cannot ignore his signature pose of opening his arms in slow motion and looking into the camera, with eyes insisting, ‘I am the King’. Hearts stop beating, don’t they?

SRK was also the first celebrity to enter the world of advertising by endorsing for consumer products like Pepsi and Hyundai. He has never been bothered by all the criticism he gets for earning money in unusual ways like dancing at weddings, ribbon cutting and other social appearances. 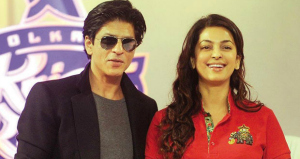 They say, it’s lonely at the top. SRK surely is an exclusion to that as the industry believes, being a part of SRK clan is a privilege higher than having an all expense paid, first class world tour. SRK is known to treat his friends like Karan Johar, Juhi Chawla and Hrithik Roshan to name a few, as family.

In fact, Juhi and SRK also have a production company called Red Chillies Entertainment together, along with the IPL team, Kolkota Knight Riders.

However it’s not a shocker that he has more enemies than friends in the industry.

The most talked about animosity in B-town is that of Salman Khan and SRK, so much so that they don’t have many mutual friends. 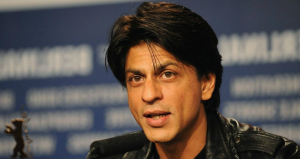 SRK has a charming way to tackle tricky questions with his witty replies and brilliant quotes. Everybody loves to listen to SRK when he speaks. His cheeky sense of humour at awards functions and interviews is a delight to watch.

SRK’s well read and clued up outlook reflects in his conversation, his interviews and speeches. One famous quote is: “I am like a Rolls Royce which can run without an engine, just on reputation.”

We at DESIblitz think Shahrukh Khan is the wine that gets better with age. You may love him or hate him, but you simply cannot ignore him.

Komal is a cinéaste, who believes she was born to love films. Apart from working as assistant Director in Bollywood, she finds herself doing photography or watching Simpsons. “All I have in life is my imagination and I love it that way!”
Why Humpty Sharma is worth 100 crores
Diljit Dosanjh shines in Punjab 1984