Punjab 1984 is a heart-wrenching drama and thriller about a mother in search for her son. Directed by Anurag Singh and starring Diljit Dosanjh and Kirron Kher in leading roles, we chat exclusively to Diljit to find out more.

Star of Punjab, Diljit Dosanjh stars in the sensitive and emotional thriller, Punjab 1984.

An atypically serious role for the actor and musician, the film sees Diljit take on the character of a simple village boy, Shivjeet Singh Mann.

Having grown up in Punjab, Shivjeet is forced to leave his home as the violence of 1984 ensues and the film follows his personal story of being estranged from his mother and the challenges he faces in returning home to her.

From the title itself, many would assume that the film is politically charged, as it pinpoints a tragic and difficult period in Indian history. 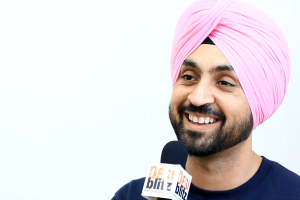 But Diljit insists that the film itself is not a political one, rather it follows the story of a mother in search of her missing son in the backdrop of the violence of Punjab in the 1980’s, making it a film that many families can relate to.

In an exclusive Gupshup with DESIblitz, Diljit says: “This film is about the story of ordinary citizens and Punjabi people, what happened after ’84 and what kind of conditions Punjab went through, as well as Punjabis themselves. It’s the story of a mother and son.”

“No doubt, Punjab 1984 is my dream project. It’s probably right to say that it is a dream project for the whole team as well. The film is directed by Anurag Singh, who directed Jatt & Juliet and some of my other films. He has written the story of this film as well as the screenplay,” Diljit adds.

Directed by Anurag Singh who noticeably moves away from the light-hearted comedy and masala films that he is known for, Punjab 1984 sees the extraordinarily talented Kirron Kher take on the role of the mother seeking out her lost son. 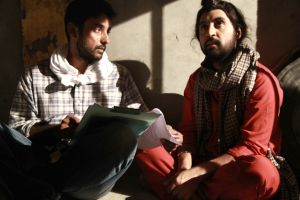 With such a challenging subject driving the film, Diljit and Anurag found difficulty in initially acquiring the right producer to back the film.

Anurag admitted that the film was a risk which not many producers were willing to invest in, as most were inclined towards the masala movies that are popular in Punjabi cinema. As Diljit says:

“We didn’t want to just make a film that had the title of ‘84’. Anurag Bhai had been working on the subject for the last 3 or 4 years, and the film needed a big budget, which eventually happened.”

“When you make a period film, you need to keep in mind a lot of things, locations and costumes and so on. The artists that we wanted on this film were expensive, so there was not much surety for any producer to take it on.” 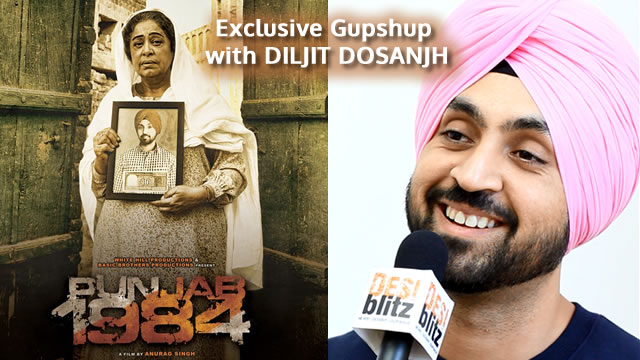 Eventually Gunbir Singh Sidhu of White Hill Productions and Basic Brothers Production took on the responsibility of backing the film. They were able to have the sensitive story released in cinemas and be watched by audiences rather than go straight to DVD. As Director Anurag Singh says:

“This is the story of a mother’s search for her son. It is heart-wrenching and full of pathos. It is a story that will touch everyone. It will reach the viewers’ hearts. A tragedy such as the one depicted in the film is not something to forget, it is something that affects generations. 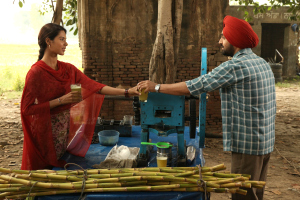 “People doubted us, criticised us and discouraged us, saying that the film will not do well, but honestly, I have not made this film for money or profit, I have made it because I wanted to,” Anurag adds.

Newbie to the industry, Sonam Bajwa insists that she had a wonderful time working on this film. Being only her second role in the industry, she explains that she was picked up by the casting director who watched her first film, Best of Luck (2013).

Initially, Sonam she was anxious about playing such a simple Punjabi village girl without any glamour or make-up, but found that the innocence and sincerity of her character brought out its own beauty, which reflects on-screen.

Speaking about working for her director, Anurag, Sonam says: “What can I say about Anurag, he is a wonderful director, he has already proved that with his previous films. 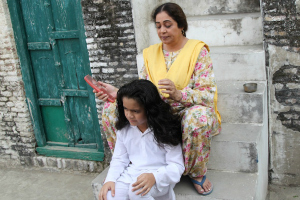 “He gave myself and the other actors complete freedom to play our characters how we wanted to – something which very few directors allow you to do. So I am very thankful to Anurag that he allowed me to make the character my own.”

The music of the film has been created by Gurmeet Singh, Nick and Jatinder Shah. As Diljit explains, the music including the lyrics and composition was created in such a way to reflect the period, while still connecting to the modern and young generation of today. It offers haunting and emotional melodies befitting the storyline nicely, and is sure to move audiences.

Diljit and Anurag have made a considerable gamble taking on such a sensitive topic that is close to the hearts of many Punjabi communities. Diljit insists however, that while the backdrop of the film is Punjab, the story connects with all communities and cultures, and is very much a global film.

Diljit is hopeful that his fans will support the film and the sincere efforts that have gone into making it. An emotional, personal and very touching movie, Punjab 1984 releases from July 27.

Aisha an English literature graduate, is a keen editorial writer. She adores reading, theatre, and anything arts related. She is a creative soul and is always reinventing herself. Her motto is: “Life is too short, so eat dessert first!”
Why Shahrukh Khan rules Bollywood
Ek Villain ~ Edge of Seat Thriller