Sajid Javid blasts PM as he urges Cabinet to oust Him

During the PMQs, Sajid Javid gave a hard-hitting speech and called on Boris Johnson’s remaining ministers to oust the PM.

"you realise something is fundamentally wrong."

Sajid Javid gave a stinging criticism of Boris Johnson in the House of Commons following his resignation on July 5, 2022.

Their resignations came after the Prime Minister admitted that he made a mistake in appointing MP Chris Pincher as deputy chief whip in February 2022 after it was alleged that the MP groped two men.

Mr Javid has now called on his former Cabinet colleagues to oust the PM, revealing that he quit because he had concluded that Mr Johnson was “the problem” and would not change.

Speaking from the back benches, Mr Javid said “the problem starts at the top” and is “not going to change”.

He explained that he is not a quitter and it had been a privilege to have served.

He went on to tell the House of Commons:

“I do fear the reset button can only work so many times.

“There’s only so many times you can turn that machine on and off before you realise something is fundamentally wrong.”

“Treading the tightrope between loyalty and integrity has become impossible in recent months.

“I will never risk losing my integrity.

“It’s not fair on ministerial colleagues to go out every morning to deliver lines that don’t stand up and don’t hold up.”

Sajid Javid said he believes “a team is as good as its team captain” and “loyalty must go both ways”. 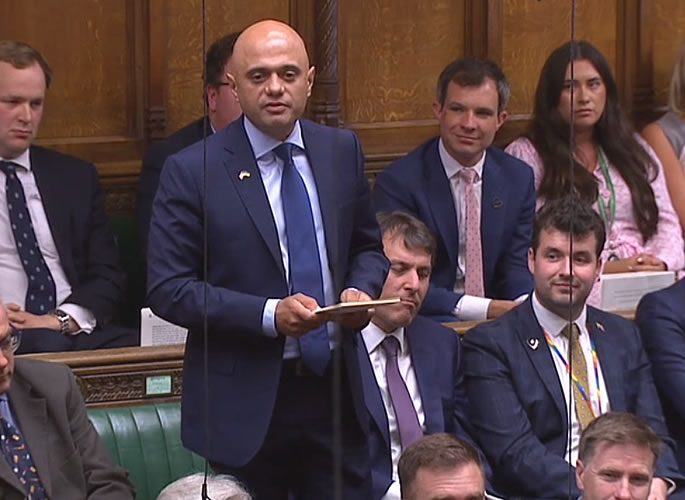 He stated that he was done with giving the Prime Minister the benefit of the doubt and revealed he had been assured by the PM’s top team that “there had been no parties in Downing Street and no rules were broken”.

Mr Javid admitted that he continued to give the benefit of the doubt following the Sue Gray report into Partygate.

Mr Javid urged his former colleagues to oust the PM while also aiming a jibe at them.

“They will have their own reasons. But it is a choice, I know just how difficult that choice is.”

“But let’s be clear, not doing something is an active decision.”

Sajid Javid kicked off a wave of resignations after sending a letter to Mr Johnson saying he could “no longer, in good conscience, continue serving in this government”.

He wrote: “It is clear to me that this situation will not change under your leadership – and you have therefore lost my confidence too.”

After he and Rishi Sunak quit, here are the Conservative MPs who have quit Boris Johnson’s government:

Dhiren is a journalism graduate with a passion for gaming, watching films and sports. He also enjoys cooking from time to time. His motto is to “Live life one day at a time.”
Nish Kumar calls PM a ‘White Man brought down by Asians’
Cabinet Ministers to urge Boris Johnson to Quit