Pakistan’s Sialkot the Maker of Bagpipes

Other than Scotland, Sialkot is the largest manufacturer of traditional bagpipes. We take a look at how this instrument is made and its components.

"Every time when we play it, we have to tune it"

Besides Scotland, the sports city of Sialkot is famous for making bagpipes, a woodwind instrument. There are several factories and workshops in the city, which produce the bagpipes.

This flourishing business in the city dates back to the 1930s during the British Empire. Producing on a mass scale, quality can vary depending on requirement and time.

During a period of over fifty years, three generations have been involved in making the traditional handmade instrument, selling it across the globe, including Scotland.

Following in the footsteps of his grandfather and father Umar Farooq has also chosen to work in the bagpipes industry.

Whilst his elders made the instruments, Farooq is the manager of Mid-East factory.

Visitors to the factory can sense the fresh smell of the wood. Employees who actually make the bagpipes are often sitting on the floor, whilst crafting away.

With the sawdust from the wood sprinkling on their clothes, workers normally have to wear mouth masks to protect themselves and for health and safety reasons. 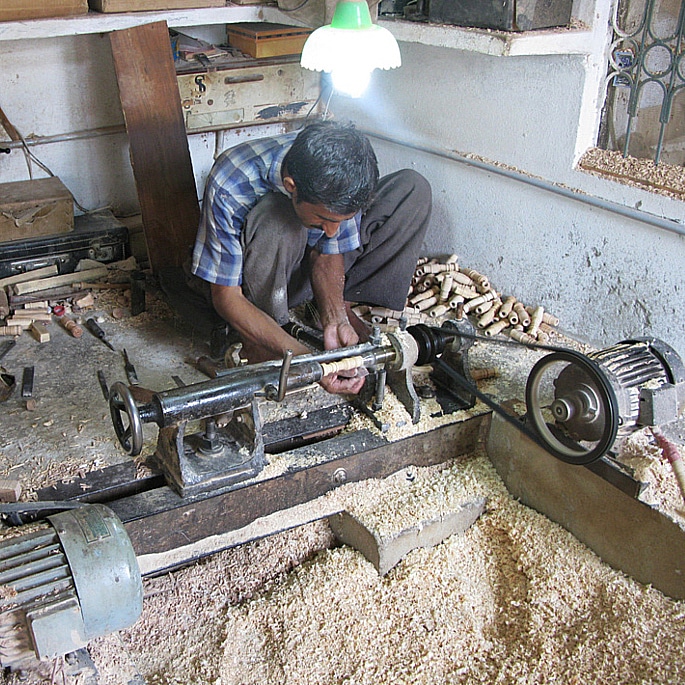 Using different machines to create the components, several people work on this difficult craft to hone.

In the next phase, workers are normally carving and polishing the wood to give it a smooth finish.

The blowstick where players exhale into is made using rosewood or ebony. There is a similar process for the drones (long pipes with a lower sound).

The blowstick and drones are then connected to a bag, which is spread with a tartan, a coloured patterned fabric typically from Scotland.

Farooq explaining his family link to bagpipes told Express Tribune: “In my family, all the boys know how to make a bagpipe, step-by-step.

“When we were seven or eight, we would go to the factory. It was like a school, but the teachers were our dads and uncles.”

The end process is to quality check the final product, including the finishing and dimensions. International visitors regularly visit factories in Sialkot to witness the process of making bagpipes. 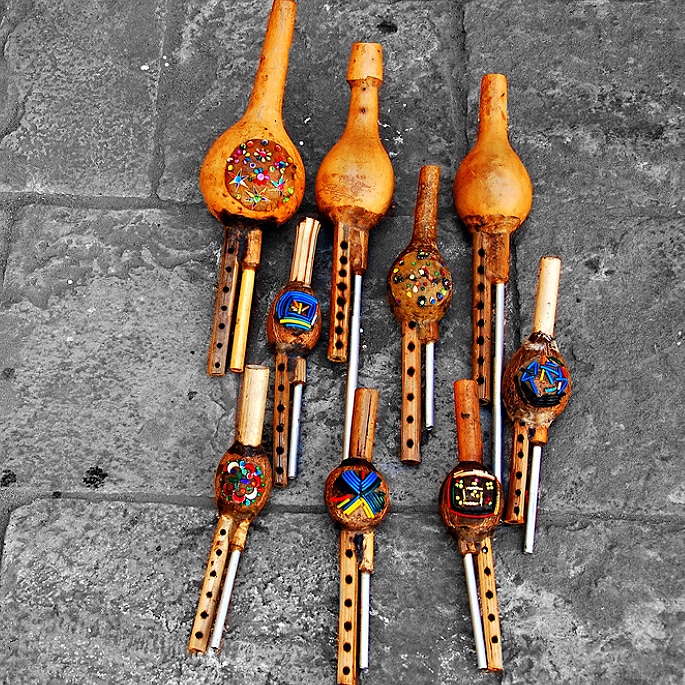 For many centuries, pungi, a wind instrument used for shehnai (oboe) was popular in South Asia. But then the early 19th century saw the introduction of the bagpipe to the Indian subcontinent, courtesy of the British Raj.

Giving a historical perspective, Decker Forrest, a Gaelic music teacher at the University of the Highlands and Islands in Scotland says:

“Anywhere the British army went, they took pipers with them:”

After the British introduced the instrument, locals then had taken up the tradition, which is still widespread in the 21st century.

Halifax and Co. run by Naeem Akhbar is one such company, which had roots to the colonial times. His grandfather who made reeds for music equipment began the business during 1930s British India.

“One of the gentlemen from British forces, he came to his shop to get one of his bagpipes repaired. And [Akhbar’s grandfather] said, ‘You leave this bagpipe with me and come after three, four days and you take the bagpipe and I will repair it.’

“When he came back, [Akhbar’s grandfather] had made the whole bagpipe new.” 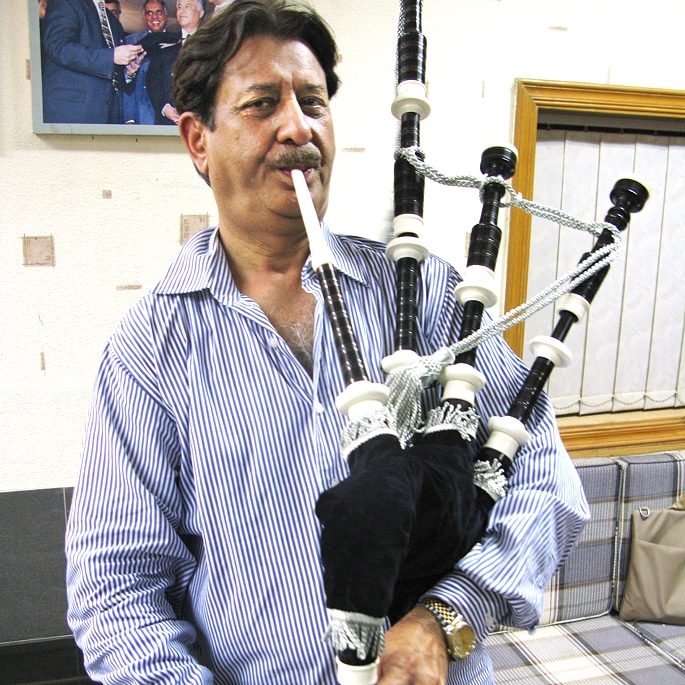 Pre-partition, Halifax and Co. essentially made bagpipes for the British Army. Post partition they targeted Indian and Pakistani customers.

In the 1970s, the family business saw growth, transforming from a mere shop to major export business. Talking of how he turned the business., Akbar adds:

“Then I went abroad. I showed the bagpipe samples to the different Scottish people, to English people, and they gave me quite a lot of orders for those bagpipes because they were as good as the Scottish ones

“But the price was almost 10 times lower than that price.”

Premium materials such as Blackwood are used to make the Halifax bagpipes. According to Akhbar, the bagpipe as an instrument is complex.

The bag acts as an air supply. The notes never change with the three drones at the top. And below the bag where the melody plays is the chanter (pipe). Akbar elaborates:

“Every time when we play it, we have to tune it before playing.”

Other than making bagpipes, a few staff members of Akhbar are also pipers. There is an eastern sound to when they play. 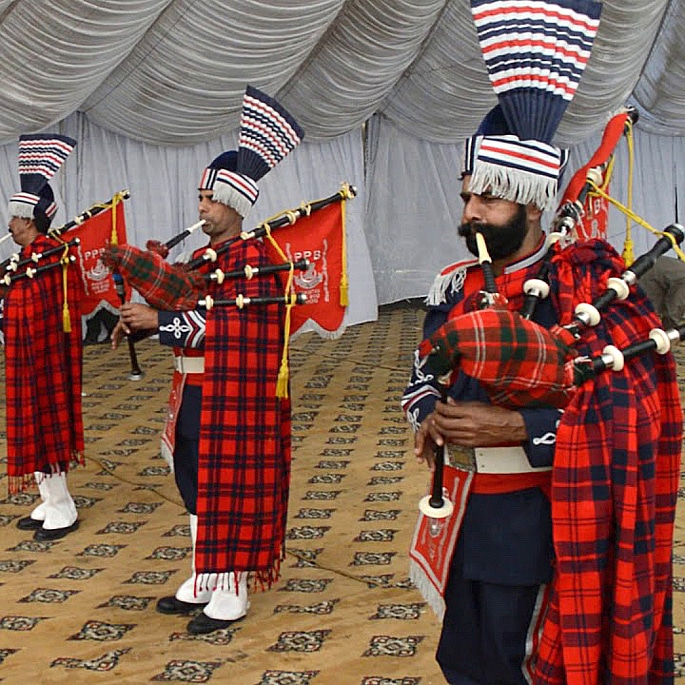 For weddings, festivals and parades, several bagpipe bands are available in Pakistan. Yaser Sain, who leads a trio, performing twice a day mentions:

The band members normally wear colour costumes during their performances.

Forest, however, feel the performers give more prominence to their attires in comparison to the musical method. He claims this “is less important to them.”

At the annual World Bagpipe Championship that takes place in Glasgow, they are “the most beautifully dressed,” he adds.

However, the kilt is not a strict etiquette amongst the Pakistanis. In Sialkot alone, there are over 20 bagpipe and drum bands.

In 2014, a camel-mounted bagpipe band connected to the Desert Rangers Unit was established by the military.

Peeople appreicate musicians swaying above camels wrapped in red and gold at parades.

However, Pakistan’s main association is the mass production of the bagpipes. Primarily to the United States, the Mid-East factory exports around 2,600 bagpipes annually each year. 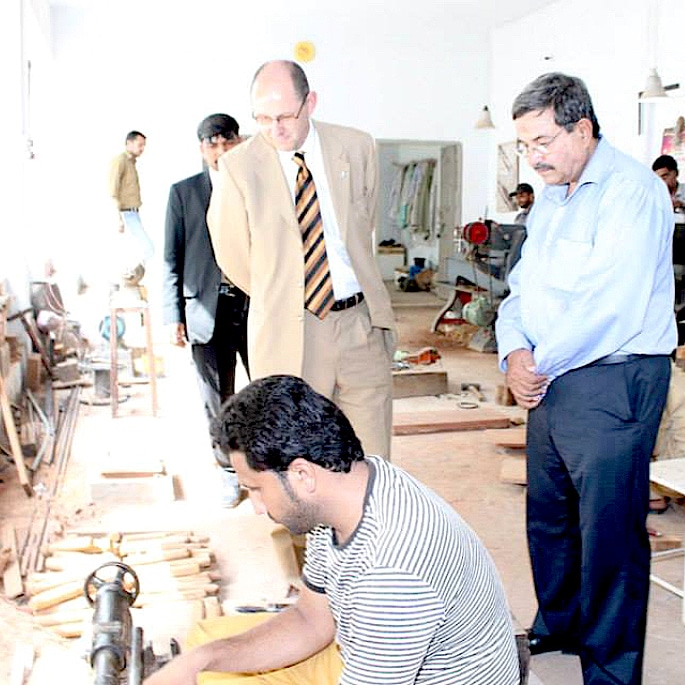 The Sialkot based MH Geoffrey & Co workshop state that they manufacture a further 500 every year.

But Zafar Iqbal Geoffrey, the owner of the workshop, feels the tally increases to 10,000 bagpipes annually when you take into account other small and medium-sized organisations from the city.

According to people in the field, other than the UK, Pakistan’s export of bagpipes is more than any other country.

“Bagpipes are our roaming ambassadors.”

“This is good not only for the economy, but for the image-building of Pakistan.”

Mohammad Aftab, uncle of Farooq believes bagpipes made in Pakistan are on par with the European and are more cost effective. He states:

“Our instruments are the same as the European ones, but they are much cheaper. We make music more accessible.” 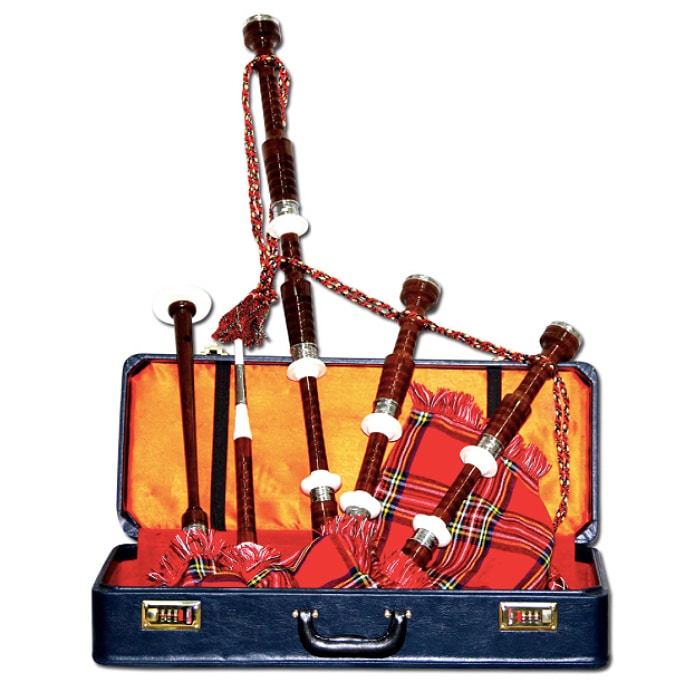 The Pakistani bagpipes are less expensive in comparison to those available in Scotland due to cheap labour in the country.

Akhbar from Halifax goes on to say:

“Quantity-wise, Sialkot is No. 1 in the world to make the bagpipe.”

But the question here is are the Pakistani bagpipes as good as what manufacturers claim.

“The quality of sound is not the same.”

“They are for beginners who are working on a really low budget. It might get somebody started, but that person will quickly look to upgrade.”

Watch a video on the bagpipe industry in Sialkot here: 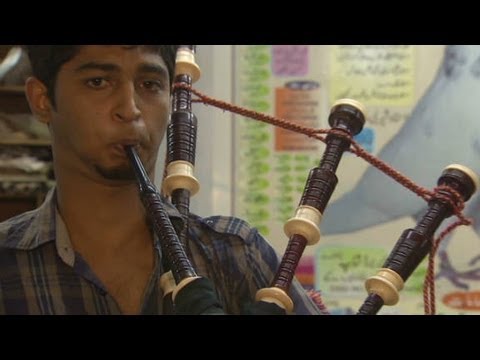 Nevertheless as mentioned before, the overall quality does vary and depend on customer specification.

Despite any question marks on the quality, there is no doubt Sialkot is like the home away from home for bagpipes.

Sialkot is certainly a major contributor to this instrument for a mass market.