A Pakistani TV show has created quite a stir by offering away newborn babies as prizes to winning couples. The newborns, who are abandoned, have been presented to childless couples as the ultimate gift.

"Our team finds babies abandoned on the street, in garbage bins, some of them dead."

When it comes to TV game shows, it seems that very little stands in the way of public contestants and their chance to win big. From flash cars, 5 star holidays, huge cash sums to a two week old baby?

It seems Pakistani TV has taken just that little step further and have offered winning contestants the chance to take home their very own – yes, you read correctly – newborn baby!

One winner and now new parent of a two-week old baby girl, Suriya Bilqees said: “I was really shocked at first. I couldn’t believe we were being given this baby girl. I was extremely happy.” 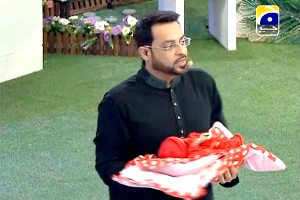 “This child is the future of Pakistan,” she added. Another winner, Karachi police officer, Said Zulfiqar Hussain, also expressed his joy:

“I cannot express in words our happiness. There was a great void in our life and that is filled by having this baby.”

The programme called Amaan Ramazan is a new segment showing in Pakistan during the month of Ramadhan. The religious show gives away prizes to contestants who answer Islamic-relevant questions correctly.

Interestingly, it has been broadcast live on the Pakistani TV channel for up to twelve hours a day in a marathon show, and it seems to have hooked viewers, breaking TV rating records:

“At Christmas there’s Santa Claus to give everyone gifts, it’s important for Christians. For us Ramadan is a really special time so it’s really important to make people happy and reward them,” said Hussain.

Unsurprisingly, the prize giveaway has caused much controversy among critics and the public alike who believe Hussain is simply using this as a publicity ploy to bring in more ratings. Many have dubbed this latest antic as both bizarre and insensitive.

It seems that Hussain who already holds quite an eclectic celebrity reputation in Pakistan may also be dubbed an idealist as well. His show features a variety of entertainment segments, from celebrity interviews, live cooking shows – which feed the needy inside the studio, to discussing religion with young children in a decorative garden.

The newborns used in the prize giveaway are those found abandoned by the Chhipa Welfare Asssociation. The NGO claims it finds up to 15 abandoned babies every month. Ramzan Chhipa, head of the NGO says:

“Our team finds babies abandoned on the street, in garbage bins. Some of them dead, others mauled by animals. So why not ensure the baby is kept alive and gets a good home?”

So does that mean the baby can just be handed directly into the arms of a complete stranger? Chhipa explains:

“We didn’t just give the baby away. We have our own vetting procedure. This couple was already registered with us and had four or five sessions with us.”

“We give adoption to those couples only on merit basis. It is not you answer a question on a show and you get a baby. This is false!” he added.

It is thought that the lucky couples had been pre-screened by the Association before being invited onto the game show. Consequently, they were already deemed viable candidates to be suitable parents.

However, the immense public criticism and international media response to such an unusual giveaway has forced both Chhipa and Hussain to defend their actions. One social networker, Shamim Mahmood wrote on the NGO’s Facebook page: “Pakistan wake up. Babies are not trophies to be handed to just anyone.”

Hussain is keen to stand his ground: “These are the disenfranchised babies that grow up to be street kids and used for suicide bombing attacks. We have tried to show an alternative.

“Telling people to take these kids off the rubbish on the streets, raise them and make them a responsible citizen, not to destroy society through terrorism,” Hussain said.

“It is not like parents come in the show, and [we] deliver the baby like a prize. What prize? It is rubbish to say ‘who wants to win a baby? We are trying to create an environment in the society for those people who are needy and want to adopt babies.”

“It is not commercialisation, it is not showbiz,” Hussain added.

Despite the couples already being registered with the NGO, there is no recognised adoption law in Pakistan to ensure they can keep the infant. Instead, the couple will have to file guardianship papers before the ‘baby prize’ is officially theirs.

While two newborn baby girls have already been given away, a third is also expected to be gifted before Eid. 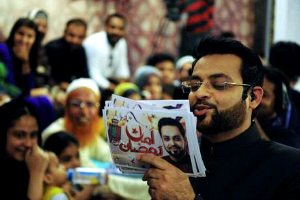 Enigmatic Hussain is adamant that he is doing a charitable deed through fulfilling childless couples their upmost wish:

“We’ve created a symbol of peace and love, that’s our show’s theme — to spread love. I’m setting an example. Giving a childless couple an abandoned child,” he said.

“People love me that is why they watch me. Through television we spread the message of tolerance,” he added.

With the show ratings through the roof, Hussain is hopeful to continue the show after Ramadhan has ended. He is also considering the possibility of broadening the concept to reflect the Pakistani Sikhism, Hinduism and Christianity minority communities in a separate show.

But while Hussain’s methods may be questionable, his heart may be in the right place. What the bizarre incident has brought to light is the dire issue of child well-being across the nation. In 2010, 1,210 babies were found dead on the streets of Pakistan.

An increase in poverty levels among the county’s poorest has meant that infanticide is on the rise. What is undeniably clear is that much more needs to be done by nationals and the government to safeguard abandoned and helpless newborns, and to adequately protect them within a secure and caring home.

Aisha an English literature graduate, is a keen editorial writer. She adores reading, theatre, and anything arts related. She is a creative soul and is always reinventing herself. Her motto is: “Life is too short, so eat dessert first!”
Josh screens at LIFF 2013
Lucia screens at LIFF 2013