On April 26, 2016, DESIblitz attended a protest in Birmingham, to attain the views of British Asian Junior Doctors on the new NHS government contract.

"The future of the NHS is looking extremely bleak unfortunately."

On April 26, 2016, hundreds of NHS Junior Doctors rallied at Birmingham’s Victoria Square to protest the proposed government contract that would be imposed on all doctors below the level of consultant from August 2016.

It is the first time in the seventy year long history of the NHS that there has been a full withdrawal of labour from emergency, paediatric and maternity services.

The new contract has been crafted in pursuit of a ‘7-Day NHS’, which will alter a doctor’s working week to include Saturdays and late evenings and make it cheaper to rota them in at those times.

DESIblitz went to speak to Asian doctors and medical staff who protested in Birmingham, UK, to find out more about the strike and why.

The most recent strike from the Junior Doctors has seen more than 125,000 appointments and operations cancelled in order to ensure essential services will run.

This has been an ongoing dispute between Conservative Health Secretary Jeremy Hunt and the British Medical Association (BMA) since October 2015, with numerous strikes and unsuccessful negotiations taking place in the last six months. 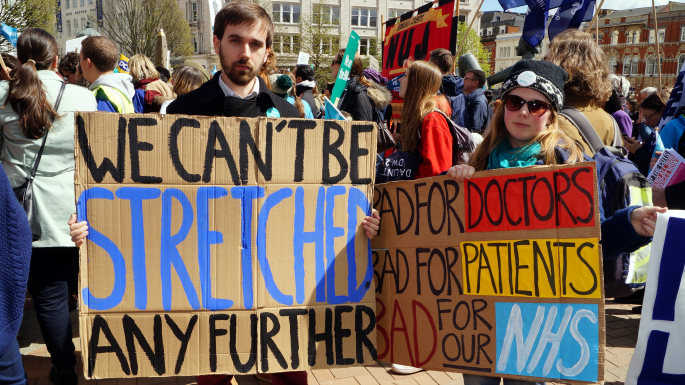 The Junior Doctors are striking for a number of reasons. They believe the new contract will:

Paul, who was protesting at Victoria Square, told DESIblitz: “Some of the rotas are pretty crazy. If you look at them Jeremy Hunt said he’s going to increase doctors on the weekend and on the rotas that have actually been published the number of Doctors has only increased by one which makes absolutely no sense.”

Many doctors believe that if the new proposed contract goes through, the future of the NHS will be very ‘bleak’. Dr Sandhya tells us:

“If they impose the new contract without listening to us then patient safety would be completely compromised. And I know personally that it’s not very fair to make us work hours where we can’t safely look after our patients, and it’s not fair on our patients either.”

Interestingly, despite the general outcry from medic to NHS changes, a number of senior physicians at Royal Colleges have refused to fully endorse the escalated strike action. They are however sympathetic to the plight of Junior Doctors. 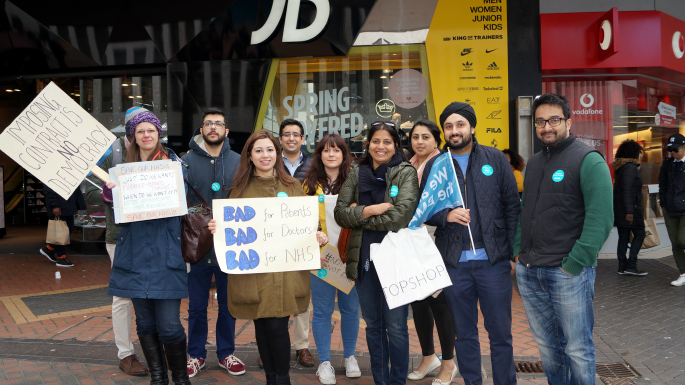 Jane Dacre, President of the Royal College Physicians, says: “The escalation of the junior doctors’ action into an all-out strike, to include acute and emergency services, is extremely worrying. I urge all my colleagues to think carefully and to do what is in their patients’ best interest, for now and for the future.”

“One of the most contentious issues is that the new contract will negatively affect women because of the time they may take out to have a family which is big sticking point.”

Public opinion has shifted somewhat since the last strikes in March 2016 but, despite the increased intensity of the protests the majority are still in support of the Junior Doctors.

An Ipsos MORI poll showed a majority of the public (57%) do still support the industrial action but the figure is down from 65% in a month ago when junior doctors did provide emergency care during a 48-hour-strike.

The future of the NHS is undoubtedly an uncertain one.

It seems like an impossible task to create fully functioning week long national health service by spreading the existing resources over an extra two days without an injection of new money.

The long-term implications are concerning as many doctors are considering moving to the attractive opportunities found in countries such as Australia.

One of these individuals is Dr Bhabu, who told us: “I am actually moving to Australia in December, at the moment I’m and A and E doc and I do the work of two doctors because there isn’t enough of us around.

“That’s only going to get worse with the new contract and I don’t want to work in a situation like that where I’m putting my patients at risk.”

Jeremy Hunt has said that being health secretary is likely to be his last job in politics and the one thing that will keep him awake at night would be if he didn’t do the right thing to help make the NHS one of the safest, highest quality health care systems in the world.

Whether his actions will yield this goal is currently being furiously debated and only time will tell if Mr. Hunt will be able to sleep at night when he leaves the political arena.