Indian Wife Beaten and Thrown Out of House after Marriage

A recently married woman from Punjab has been beaten and thrown out of her house. Seeking justice for her situation she’s protested outside a police office.

" I seek justice against them from you SSP Sahib"

In Punjab’s district of Faridkot, Sumanpreet Kaur, who recently got married, was badly beaten and thrown out of the marital home.

Sumanpreet’s in-laws, including the husband, physically assaulted the woman, kept her dowry, and then forced her out of their house.

It’s reported that the incident took place in the village of Deep Singhwala in Faridkot.

After her ordeal, still wearing the bangles from her wedding ceremony, Sumanpreet resorted to a public protest outside of the district police chief’s office, after not getting any local support.

Sitting on the floor outside the office, the heartbroken woman wanted justice and was holding up a placard stating her issue.

The card in Sumanpreet’s hands said:

“Thrown out of the house by in-laws after being beaten, I seek justice against them from you SSP Sahib.”

Where the SSP in her message stands for Senior Superintendent of Police.

In her protest, Sumanpreet was accompanied by a close relative who has been supporting her after her horrid ordeal. 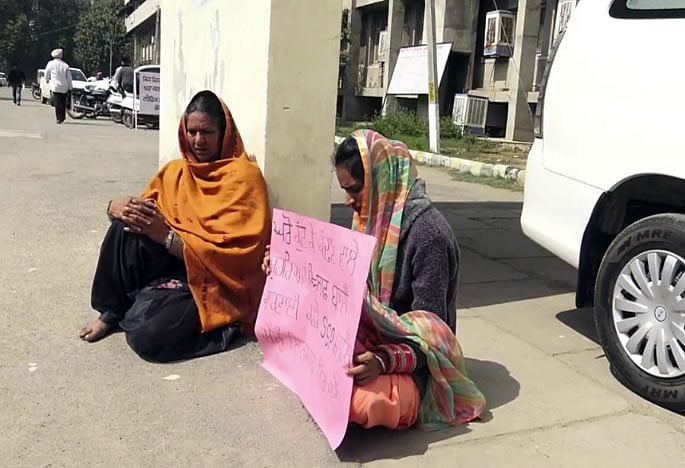 She told reporters that her marriage took place in October 2018, in Lakhmirwala near Mansa, not far from Bathinda.

Her family gave as much as they could in the dowry for her wedding. Coming from a poor background they gave what they could just about afford.

Then soon after the wedding, her in-laws began to harass her for more dowry with threats.

In January 2019, her in-laws demanded Rs 10 lakh from her and began beating her aggressively.

When she could not get the money they forcibly threw her out of their house.

She then went to the local police station to file a report but no one took her seriously being a woman or believed her story.

Therefore, she decided to come to the SSP’s office and took the step to protest about her injustice and ordeal at the hands of her in-laws.

Upon learning about her situation an investigation into the case has been launched by SP Sewa Singh Malhi.

He said what has Sumanpreet, the victim, is very wrong.

The chief of police has ordered an immediate investigative report on the matter.

Based on the facts and information collated, appropriate action will be taken against those who have committed the alleged crimes.

Amit enjoys creative challenges and uses writing as a tool for revelation. He has major interest in news, current affairs, trends and cinema. He likes the quote: "Nothing in fine print is ever good news."
Pakistani Policeman shot in Honour Killing by Woman’s Family
Newly Married Pakistani Wife set on Fire by In-Laws