Aishwarya Rai, the estranged wife of politician Tej Pratap Yadav, alleged that she was denied food and thrown out of Lalu Prasad’s house.

"Misa regularly misbehaved with me, harassed and tortured me."

Rashtriya Janata Dal (RJD) chief Lalu Prasad Yadav’s daughter-in-law Aishwarya Rai has claimed that she was kicked out of his home and denied access to food.

She accused her mother-in-law Rabri Devi and sister-in-law Misa Bharti of being responsible for her ordeal.

On September 29, 2019, Aishwarya said she was told to leave Prasad’s home on 10 Circular Road, Bihar.

Aishwarya explained that she had been staying there even though a divorce petition had been filed.

She also alleged that her in-laws had not provided food for her for the last three months. Aishwarya was also not allowed to enter the family kitchen.

She said that it was under the instructions of her sister-in-law Misa. During this time, her parents had been sending her food.

She told the media: “I get food from my parents’ home.”

Aishwarya accused Rabri and Misa of harassing and torturing her.

She said: “Misa regularly misbehaved with me, harassed and tortured me. Last night (September 28, 2019) she again tortured me and threw me out of the house in the presence of Rabri Devi.”

Aishwarya also stated that Misa was to blame for her strained relationship with her husband.

“Misa didn’t want my relations with my husband to improve.”

During the midst of the pending divorce case, she tried to film instances of harassment in order to back up her claims, but the staff allegedly tried to take her phone off her. 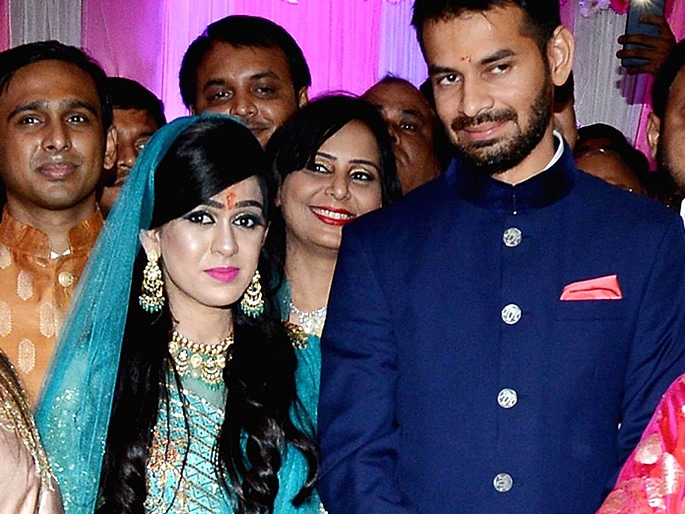 Prasad was convicted and jailed for multiple corruption cases.

Tej Pratap and Aishwarya were married in May 2018 in Patna. Several political leaders attended the wedding including Bihar Chief Minister Nitish Kumar.

However, their marriage soon went downhill and Aishwarya later accused her husband of being a drug addict.

In November 2018, Tej Pratap filed for divorce after publicly speaking about his compatibility issues with his wife.

On September 14, 2019, Aishwarya was spotted leaving her in-law’s house in tears and sat in a vehicle belonging to her father before returning back to the house.

The divorce case is pending before a court.

Dhiren is a journalism graduate with a passion for gaming, watching films and sports. He also enjoys cooking from time to time. His motto is to “Live life one day at a time.”
Pakistani Man Slapped by Woman on Bus for Touching Her
Drunk Nephew attacked Uncle on his Hospital Bed