A groom in Canada has been thrown off a horse, that has been allegedly fed with marijuana just before the wedding ceremony! See the viral video here!

“The horse has done several weddings and she has always been perfect.”

A Sikh groom’s moment of joy and pride was abruptly interrupted when he was thrown off the back of a horse.

The footage posted on YouTube on July 18, 2015 shows him mounting onto a white horse, outside a Surrey temple in British Columbia, Canada.

As the groom sat firmly, the allegedly drugged female horse began to fiddle and galloped nervously in circles.

Her handler, Stiasny, tried to calm Misty down and succeeded after the horse made a few more rounds.

Just when onlookers thought it was safe to approach the groom, Misty ran off in a tangent with the groom on her back!

Stiasny had completely lost control, as the horse charged at full speed away from the crowd.

Eventually, the poor groom fell off the horse and landed next to a tree. Wedding guests came to his rescue, but he was fortunately unhurt.

Though the groom was able to ride to the wedding ceremony afterwards, Misty’s erratic behaviour shocked many.

Stiasny said: “The horse has done several weddings and she has always been perfect. I do not know what happened.”

When CBC news asked her about a Snapchat video showing a man feeding marijuana to Misty, she denied, saying:

“Who would do that? I have no idea what a substance like that would do to her.

“She wouldn’t touch it anyway. There’s no way – she wouldn’t eat it – horses are way smarter than that.” 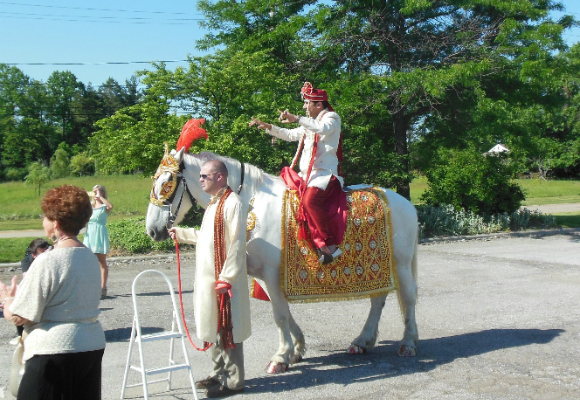 But she phoned CBC on July 23, saying the feeding video was recorded about an hour before the wedding ceremony.

Stiasny said: “I thought he was feeding her grass or alfalfa. I think in fact he did feed it weed.

“It’s possible it contributed to the horse getting all reactive.”