Karan Kapoor, an NHS doctor and consultant, slams the Health Secretary in an open letter on Facebook for underpaying his overtime work. DESIblitz reports.

“£2.61 per hour is significantly less than the minimum wage let alone the living wage.”

An Asian NHS consultant has accused Health Secretary, Jeremy Hunt, for paying him way under minimum wage for overtime work.

Karan Kapoor, an ENT (ear, nose and throat) consultant, has written an open letter to the MP on his Facebook page on July 21, 2015.

The displeased doctor heads straight to the point and describes details of his on-call duties and salary received from the NHS.

He claimed to have received only £313.54 – matched with the pay slip photo attached – for an additional 120 working hours every month.

He wrote: “Simple maths says that works out as £2.61 per hour – significantly less than the minimum wage let alone the living wage.”

The current national minimum wage in the UK for employees aged 21 and over is £6.50 per hour. This means Kapoor is getting paid less than under-18s and apprentices (£2.73 per hour) for his overtime work. 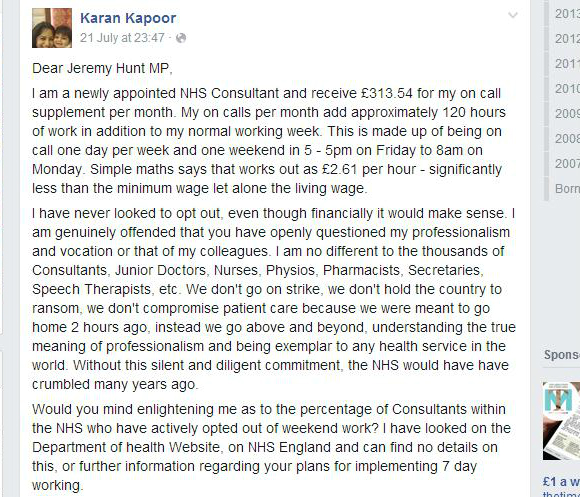 The Asian surgeon tries to bring the MP’s attention to his and his peers’ contribution to the health services across the UK.

He wrote: “We go above and beyond, understanding the true meaning of professionalism and being exemplar to any health service in the world.

“Without this silent and diligent commitment, the NHS would have crumbled many years ago.”

The ENT surgeon also addresses Hunt’s earlier comment in the week about the detrimental effect of NHS’s ‘Monday to Friday culture’ on patients.

Kapoor wrote: “I would urge you to simply apologise for the language you have used, and look to engage in a conversation rather than an ultimatum.” 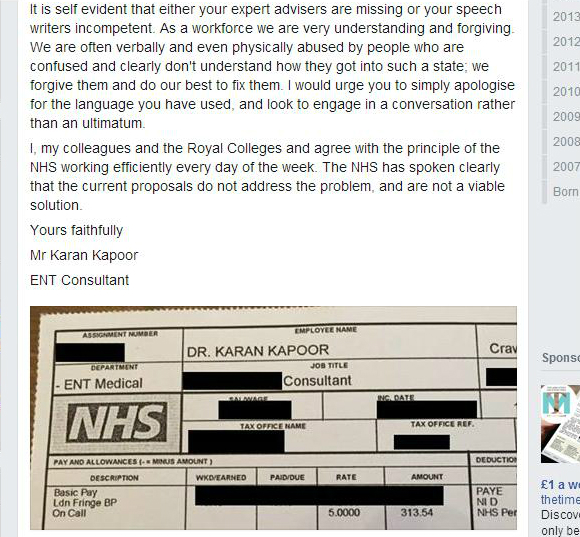 His open letter slamming the NHS has received 108 likes and over 20,000 shares since posting on Facebook in the late evening of July 21.

Kapoor’s story is gaining momentum on Facebook and has invited a wave of support from the public and other NHS employees.

Shak Moh commented: “Wow. Shocking. Regardless..Thank you for not opting out and looking after our health.”

“20 years of training, 3 degrees, quietly get on with life saving surgery getting paid a third of the minimum wage.

“Then Mr Hunt suggests we don’t work weekends and need to act professionally! I think he has helped us bring this situation to light.

“We must fight to KEEP our profession the wonderful profession it should be.” 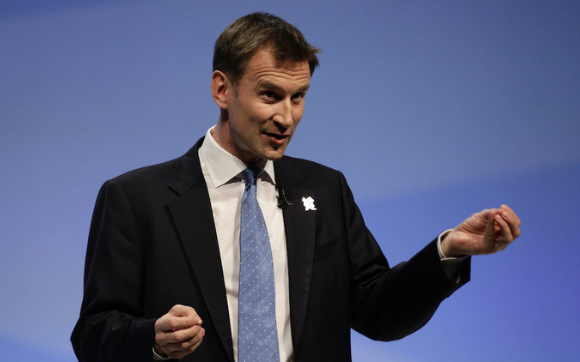 Hunt came under fire on July 16 when he claimed a weekday working culture in the NHS has resulted in ‘tragic consequences’. He even attributed an annual death of 6,000 people to it.

It caused fiery reactions from medical professionals, such as doctors, nurses and associations, who kicked off the Twitter trend ‘#ImInWorkJeremy’ with photos of them at work.