An Indian bride from Uttar Pradesh went to her in-law’s house and her wedding took place. What was unique was that it was dowry-free.

An Indian bride had a unique wedding ceremony in which she went to her in-law’s house for the ceremony and that it was dowry-free.

The wedding happened in the city of Meerut, Uttar Pradesh on April 15, 2020.

Fearing that he would breach the lockdown, the groom said he could not go to the bride’s house. Instead, the bride went with her family to her in-law’s house and the marriage took place.

A traditional wedding then took place.

The bride, Nikita, was arranged to marry a man named Brajmohan. Their wedding had been arranged in December 2019 and it was set for April 15.

The wedding was set to go ahead as the lockdown was to be lifted on April 14. As a result, wedding preparations were being made.

However, their efforts were scuppered when Prime Minister Narendra Modi extended the lockdown until May 3, 2020.

Brajmohan talked about delaying the wedding but Nikita was determined for the marriage to go ahead.

On the day of the wedding, the groom’s family said they could not bring the procession to Nikita’s house. So the Indian bride went with four family members to her in-law’s home. 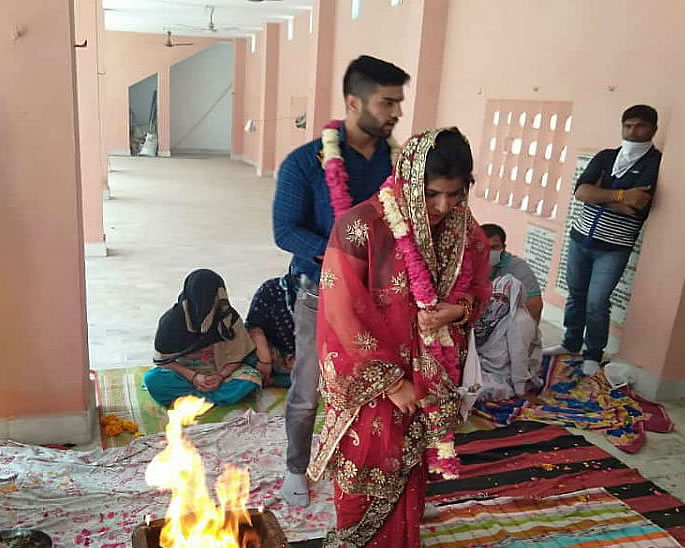 Nikita, who was dressed in her bridal gown, went with her parents, uncle and sister to the groom’s house, where they were welcomed.

Both families agreed that they should have the marriage at a nearby temple. The bride and groom went to a temple in Matour village.

A priest was called and the ceremony was conducted.

Precautions were taken as the priest and some guests wore masks.

The in-laws decided that they will not take dowry from the bride or her family.

Following the wedding, the bride left her in-law’s house and returned to her home in order to avoid breaching the lockdown guidelines.

In Uttar Pradesh, the number of infected patients stands at 735, with 11 deaths.

The total number of confirmed cases in India is more than 11,000 and there have been 392 fatalities.

While this is the number of confirmed cases, it is believed that the number is much higher.

According to a BBC News report, the outbreak is being underreported in India and doctors have said that the real scale is unknown because of how the country has been testing so far.

Dhiren is a journalism graduate with a passion for gaming, watching films and sports. He also enjoys cooking from time to time. His motto is to “Live life one day at a time.”
What Legally Counts as Domestic Abuse in the UK?
Harjap Bhangal’s Advice for Stranded British Citizens in India