The India vs Pakistan comedy clash, featuring six talented comedians has been a big hit with the British Asian community. DESIblitz highlights the event.

The first ever India vs Pakistan comedy clash show was hilariously peaceful and successful.

As promised in the build-up to the event, the six comedians on show delivered lots of fun and banter. What they did really well was to engage with the audience.

Organised by Plan Your Entertainment (PYE), the event took place at the Watermans Art Centre in London on 08 September 2018. Salman Malik, one of the comedians who went onto perform during the evening is the founder of PYE.

The turnout was good at the show, with an energetic crowd ready to witness the two countries go head to head in a competitively fierce battle. The show was apparently sold out two weeks in advance of the event.

A selection of energising Bollywood and Bhangra tracks were played in the auditorium, whilst people took to their seats.

A couple of celebrities were in attendance such as singer/songwriter Ketan Kansara who specialises in retro Bollywood songs. Former Rugby League player Ikram Butt was also present.

The show began with talented British stand-up comedian and host Jay Handley coming onto the stage. In the context of the show, Jay went DESI with his jokes and appearance.

Jay definitely made the effort to impress as he was wearing a cream Sherwani, along with matching mojari footwear. Jay instantly picked on a few people in the audience to share some funny moments with everyone.

Following a few warm-up jokes, Jay introduced both teams onto the stage. 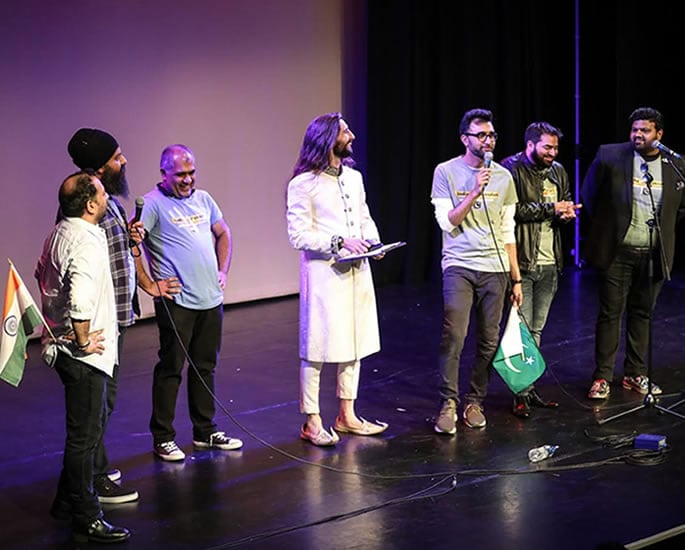 The Pakistan team was first to come on, with huge cheers from the audience. Their team consisted of skipper Salman Malik, Mani Liaqat and Aatif Nawaz. All three comedians were proudly waving the Pakistan flag as they danced around Jay.

The announcement for Team India came next, consisting of captain Jay Sodagar, Anil Desai and Hyde Panaser. Just like their competitors, they cheerfully danced around Jay on stage.

Both teams eager to show their early dominance were grabbing the mic from Jay and sledging their respective opponents. The audience could not stop laughing as Team India was having a friendly dig at Pakistan and vice versa.

Jay was playing the responsible neutral umpire, settling down the teams. After the national anthems of both countries, it was time to play.

India won the toss and decided to go first. The bubbly Jay Sodagar took the stage first, as the battle commenced.

In a very typical Gujarati style, Sodagar comically touched upon the frustrations of Indian families, specifically about being overweight.

He referred to how Indian parents initially overfed their children from a young age. But as they became adults the parent would say: “Why are you so fat? put the ghee down beta.” This made everyone laugh, as it is a common example within Brit-Asian and South Asian households. 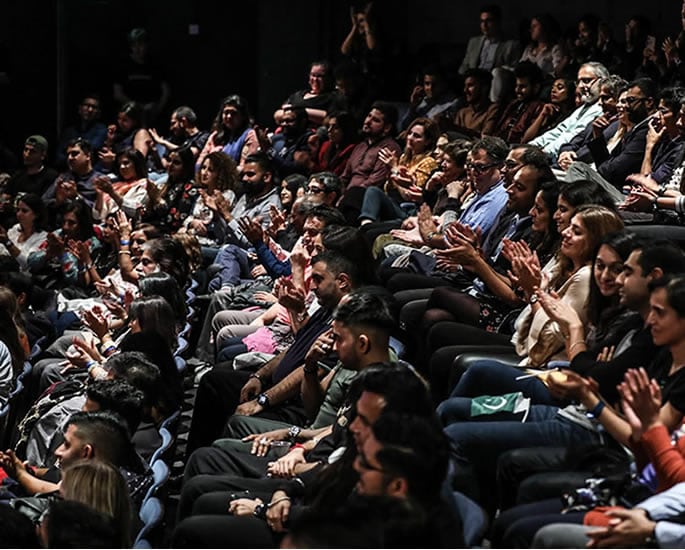 Sodagar also addressed the subject of marriage, as he wrapped up his segment. His comedy was subtly gentle, but also very effective.

Team Pakistan had to respond, and they most definitely did! In came Mani Liaqat who on the night was the most bravest of all the comedians. Mani was daring and more than happy to communicate with members of the audience.

Liaqat was powerful with his Urdu and Punjabi punchlines and quick at identifying targets in the audience to pick on. Mani took his comedy to a next level, highlighting the LGBT community and other sensitive issues.

A non-Asian woman and her business acquaintance became a real soft target for Mani. He demonstrated witty humour at its very best. Liaqat also imitated Shahrukh Khan and Amitabh Bachchan, The reaction of the audience to Liaqat was very positive. After the first round, it certainly felt 1-0 to Pakistan.

Back to Team India, it was now the turn of Anil Desai. Anil was under a bit of pressure, following the stellar performance from Mani.

Desai was great at mimicking, especially of famous characters such as Homer and Marge from the Simpsons. Desai went onto explain his passionate roots of comedy. He mentioned it all began when he became inspired by Eddie Murphy, particularly a comedy act performed by the American many years ago.

Anil also thanked his parents for being very supportive and encouraging him to take a different career path. Desai did make the audience laugh a little. However, he could not quite connect with them as compared to the others. His jokes had a more North American flavour. Yet the audience was more DESI in nature and spirit.

The fourth comedian on stage, representing Pakistan was captain Salman Malik. He started by thanking everyone for attending the show. Salman performed LIVE in front of his Sialkoti mum for the first time.

Salman used his mum as the main catalyst for the first few opening jokes.

Jokingly, Malik said: “My mum moved to London, unlike some of you lot, she came here the Halal way, not on the banana boat way.” The audience burst into laughter at this.

Salman also entertained everyone with his dance moves and English translation of ‘Bole Chudiyan’ from Kabhi Khushi Kabhie Gham (2001). Not shy of performing in front of his mother, Malik was confident throughout. His jokes were multi-lingual, across English, Punjabi and Urdu. 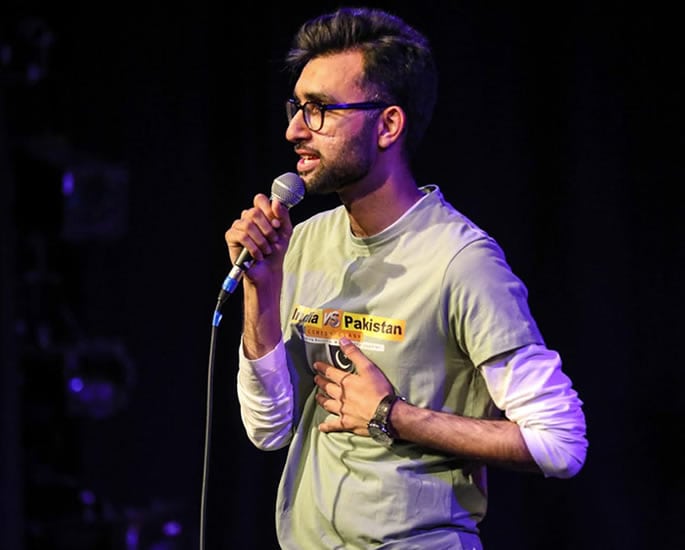 At the half-way mark, Pakistan extended their lead to 2-0, going by the audience reaction. The evening was not solely about comedy. After a short interval, singer and songwriter Deewan appeared on stage with a young lady.

Performing together, the young lady rapped in French while Deewan played his guitar and sang in Hindi. It was great to see two languages come together and work ever so beautifully with one another.

Moving onto the grand finale, Hyde Panaser of Team India came onto the stage. Already familiar with his work, the audience welcomed him to a rousing applause.

Hyde talked about the Asian experience of living with parents. Panaser admitted that he still lives with his own parents.

His comedy continued with stereotypical Punjabi jokes, that centred around Punjabi men being obsessed with home extensions. The audience could relate to Hyde on all levels as his jokes were spot on.

The final Pakistani act was Aatif Nawaz who shared jokes of his living experiences in Edinburgh and being the only Asian guy amongst a group of white people. Aatif went on to tell everyone about his upcoming BBC Comedy TV show.

He also joked about still having to wait an entire year to get a visa for India to attend his friend’s wedding.

Nawaz then called up his friend from the audience to perform a game where you start a sentence with a letter of the alphabet.

His friend was good, while Aatif needed assistance from the audience as he could not recite the alphabet and got confused. This game became a source of entertainment as the audience could not help but laugh out loud.

It was a close affair between the last two performers. Aatif just got the edge to complete a 3-0 sweep for Pakistan according to the reaction from the audience.

Overall this first ever India vs Pakistan comedy clash event was an entertaining evening, filled with laughter. Both teams showcased exceptional comedy. Besides any final scorelines, the main reason for this event was about bringing the communities of India and Pakistan together.

It allowed people from all communities to come into a room and celebrate the different cultures and laugh at genuine comedy. The event certainly did break barriers, spreading love to build a strong peaceful foundation for future events.

All in all, it was a hugely successful event. The event was followed by an after-party at Terminal 6 Lounge.

DESIblitz congratulates Salman Malik for organising a wonderful event, which acts as a peace intervention. We hope to see more events soon from Plan Your Entertainment.

Priya is a Film and Television graduate. She has major interests in films, comic books and makeup. and is professionally trained in acting, dance and singing. Her motto is "I love acting. It is so much more real than life." by Oscar Wilde.