"We share a lot of similarities as two nations."

Plan Your Entertainment (PYE) partners with DESIblitz to give away a pair of tickets each for India vs Pakistan Comedy Clash: Breaking Barriers with Comedy and Laughter in Manchester on Saturday, March 2, 2019, and London on Friday, March 8, 2019.

Following the grand success of the 2018 event, India vs Pakistan Comedy Clash returns for 2019 as a 2-city tour held in Manchester and London.

This unique and hilarious two-hour comedy show will aim to unite the Indian and Pakistani communities together through laughter.

With British Asians enjoying comedy, this show is already creating a buzz amongst a diverse range of people, including families, professionals, and students.

The shows will welcome 10 exceptionally funny and award-winning comedians, including the host who will entertain everyone.

Both shows will entirely be in English, with the occasional usage of Hindi, Punjabi and Urdu.

The Manchester clash will see two fantastic comedians each from India and Pakistan battle it out. Whilst 3 comedians on either side will compete in the London clash. 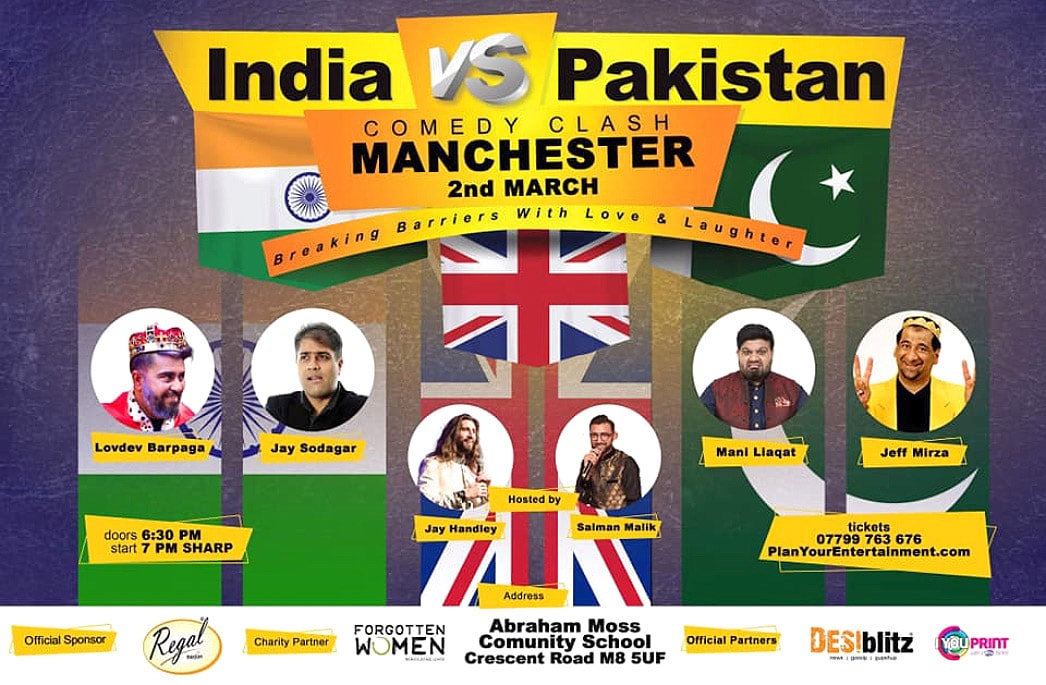 Let’s take a look at the supreme line up for both shows:

Stand-up comedian Jay Handley who will be representing the England team returns as the host for both shows. Handley stole the show in the 2018 India vs Pakistan Comedy Clash, with his casual style and sense of humour.

Lovdev Barpaga also known as the ‘Punjabi Warrior’ is a British Asian comedian who was crowned UK Pun Champion 2017.

Jay Sodagar is a British Asian comedian who has a fresh and varied approach. His comedy goes beyond the curries and comedy accents.

Sukh Ojla is a stand-up comedian who frequently performs around London and the UK. Her performances include the Alchemy Festival and BBC Asian Network’s Comedy Night.

Hyde Panaser is a British Punjabi comedian who is famous for his quirky, smart and hilarious jokes. Panaser has a proven track record, producing, writing and presenting several high-quality community radio shows.

Eshaan Akbar is a funny comic with unforeseen jokes and an elegant expression in his spoken delivery. The British Asian comedian is a diplomatic provocateur.

Aatif Nawaz is a very funny and award-winning British Asian comedian from London. He is a respected act within the comedy circles.

Malik who is also the co-host for the Manchester event spoke exclusively to DESIblitz about the vision behind this event:

“The idea for this event was born 2 years ago and inspiration was my obsession with cricket.

“Like a cricket match, the event has two captains that will toss a coin.”

“We even go as far as playing the national anthems. It’s like taking a situation and being upfront about it.

“There is tension between Pakistan and India but by using comedy as common ground between us we are coming together and rebelling against the idea that we cannot be one.

“We share a lot of similarities as two nations.”

Salman and his team have put their heart and soul into this project. They have loads of surprises for the guests attending.

The unmissable evening will be full of great laughter and banter.

Tickets can be purchased by visiting the links above.

FREE TICKETS COMPETITION
We have one pair of tickets to give away to one lucky winner for each venue.

Then, simply answer the question below and submit your answer to us now!

One entry will allow you to win two tickets for one event. Duplicate entries will not be accepted.

The competition closes at 12 pm on Monday, February 25, 2019. Please read the Terms and Conditions of the competition below before entering.