The India vs Pakistan comedy clash recommenced in London, uniting communities together. We highlight the event, featuring 6 comedians and an enigmatic host.

“I am not allowed to say anything as my wife is in the crowd."

The India vs Pakistan comedy clash event in London was back with a bang and certainly did not disappoint.

Headlined as ‘breaking barriers with love & laughter,’ there was plenty of this on display. Uniting communities, the comedians had everyone in stitches throughout the night.

Similar to 2018, Plan Your Entertainment (PYE) held the event at a bigger venue due to public demand. The comedy night took place at the Harrow Arts Centre on March 8, 2019.

Salman Malik, who was one of the main acts representing team Pakistan is the founder of PYE.

There was a huge buzz in the audience, with exciting and energising Bollywood dancing tracks playing in the background.

The crowd were ready for the fierce battle between two nations going head to head through comedy. As always there was a lot of pride and honour stake – be it in a friendly spirit.

The audience in attendance came from a mixed background, including Asians and non-Asians too. Audience members were fully aware that the comedians could pick on any one of them during a night of surprises and twists. 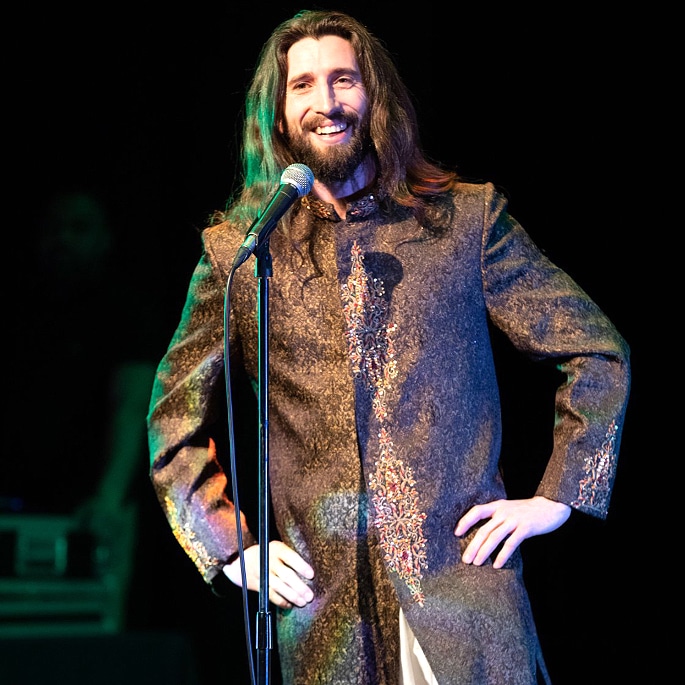 The show got going with the enigmatic host Jay Handley, who himself is a talented British stand-up comedian.

Jay in the true spirit of the night wore a traditional Sherwani outfit. His joke about turning “water into lassi” immediately got everyone into the mood.

He turned the tables around quickly as he began to pick on the crowd, especially the front row. They did face the brunt of the jokes from him throughout the night.

With the crowd warming up, Jay called out the two team captains. Eshaan Akbar of India and Salman Malik from Pakistan then came onto the stage.

Eshaan immediately made his presence felt, shouting “India Zindabad.” Whereas Salman made his entry dancing on to the stage in his typically energetic self. 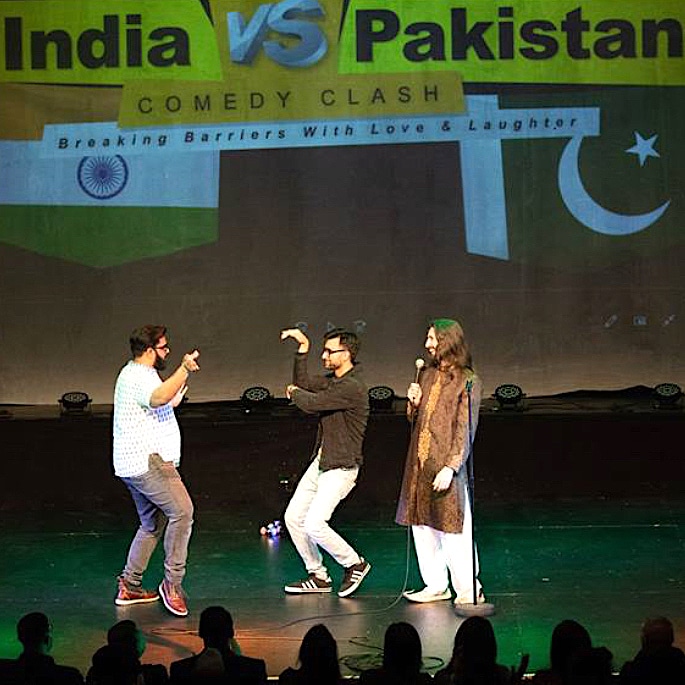 Both captains dancing off, tried to psych each other out, amusing the audience along the way.

In reply to a question about if he had anything to say, Salman put himself in a diplomatic position stating:

“I am not allowed to say anything as my wife is in the crowd.”

Jay managed to pick out Salman’s wife who was sitting front left of the crowd and teased him by saying:

“Comedians will now pick on you more due to this reveal.”

However, this did not deter Salman, as he went onto respond:

Salman praised the crowd and thanked them for attending. Both captains then walked off ready for their teams to do begin the battle. 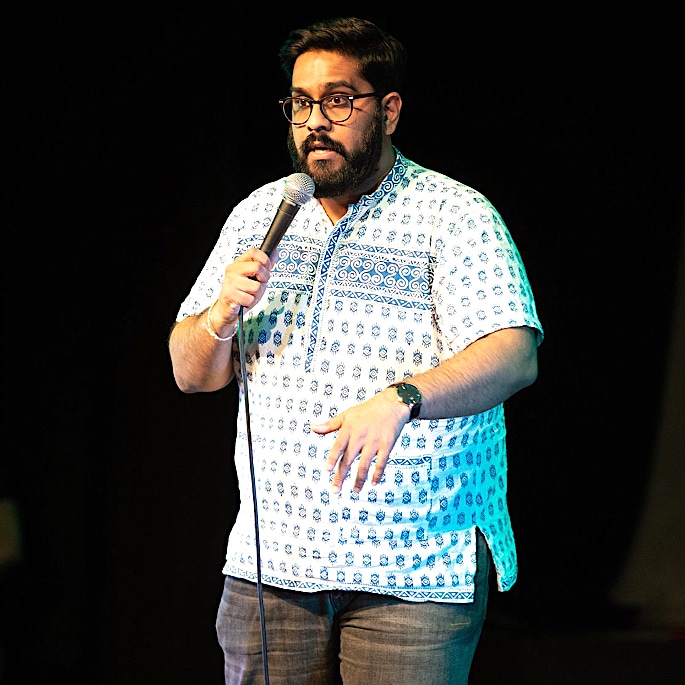 Happy to support Team India, Eshaan Akbar was the first comedian to appear on the night, dancing to the song ‘Balam Pichkari’ from Yeh Jawaani Hai Deewani (2013).

But for a second Eshaan confused the crowd, by revealing it is difficult for him to get a visa for India.

The state of confusion was because his dad is from Pakistan, whilst mum is Bangladeshi. In reference to his dual background,  jokingly he was proud by the fact that could make a “fantastic pair of jeans.”

He continued emphasising about his roots, mentioning the racism in his household, where his mum and dad were racist to each other.

Despite presenting several humorous examples of differences between people from the two nations, his aim was to highlight the common bond two communities can also share.

The harmonious audience appreciated his underlining message and jokes.

Eshaan did himself proud, leaving the Indian crowd in a very jovial mood The Pakistani crowd were quaking in their boots,  but they feared not, with their captain up next. 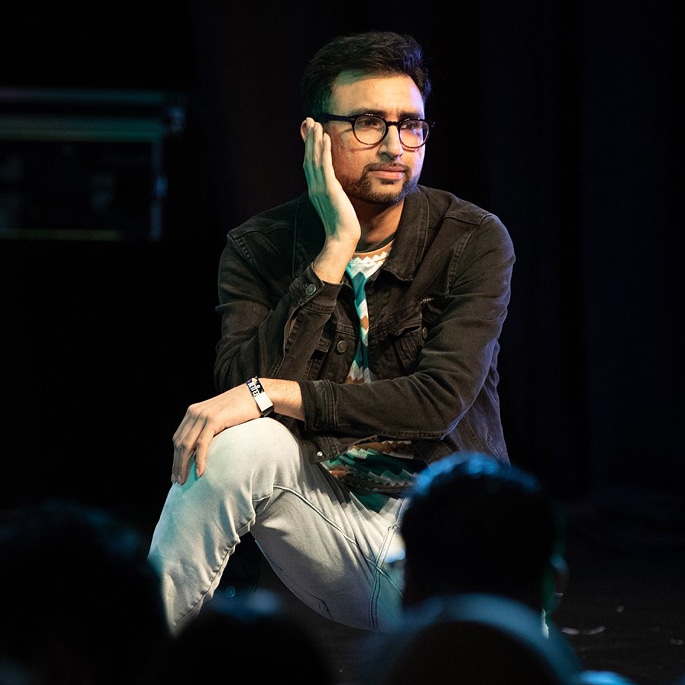 Salman Malik came out roaring, with the audience giving him a big applause. His popularity, originality, definition was there in person for everyone to see.

Despite being the organiser of the event, Salman had a sense of composure as he did not let the pressure of the occasion get to him.

He wittingly expressed that having such a position came with its headaches. He said some people had asked him for a “family discount.”

Referring to “strangers” particularly,  Salman stated they were the most annoying as he elaborated:

“They want such a big discount I might as well give it away for nothing.”

His jokes now turned closer to home, with the crowd knowing that his wife was in the audience.

There were a lot of home truths coming out, as he mentioned how his son Adam kept getting him into trouble.

Such family related jokes related to the many husbands and fathers in the crowd. They were all nodding and saying: “Yes that’s happened to me too.”

With the performance of Salman, both captains had set the tone for the night with their gags. 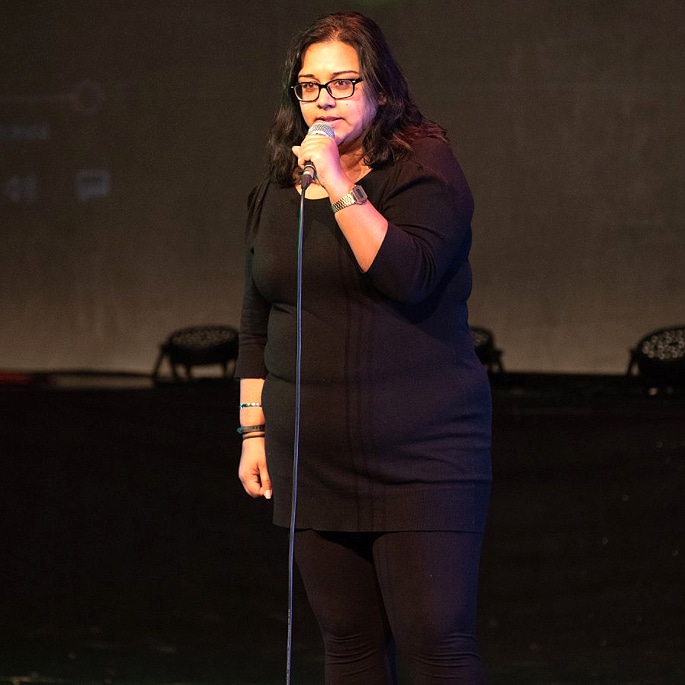 Sukh Ojhla was a breath of fresh air. The only female comedian of the night, she was constantly joking and referring to her weight.

She honed into stereotypes about older Desi girls who have to deal with their “aunty ji’s” about their marriage or career.

She mentioned her “failures” for being a 34-year-old female, and still “single, house sharing and unemployed.”

The bit that brought the house down was in fact when she elaborated on sharing a house with her parents.

This was something many modern young Desi adults can relate to during these tough economic times – nevertheless, her joke was hilarious.

She went onto discuss how her mum is so “nice” as she allows guests to stay at their home with no restriction.

“However, eldest aunty only gives you £20 to go and buy sweets.”

Sukh from Team India was a bundle of laughs, leaving the crowd in bits. 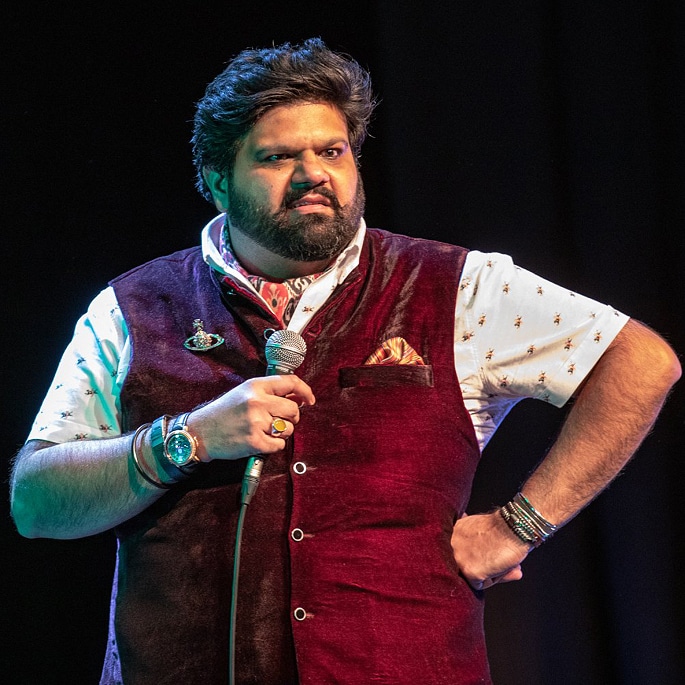 Mani Liaqat from the Pakistani team was the man of the moment and the most energetic of the night.

He was bursting with vibrancy and his energy levels were unmatchable. Many of his jokes were in relation to his native home.

He also discussed other matters including politics, breaking away from humour for a moment to highlight the seriousness of having inner peace.

Then a member from the crowd began to shout the name of Imran Khan.

This was easy pickings for Mani, who without hesitation started to pick on this innocent lady, constantly mocking her.

He conducted “Imran Khan. Imran Khan Imran Khan” impersonations – be it all in jest.

The audience, especially from the Pakistani community did relate to him and laugh.

Whereas those not familiar with his lingo, also enjoyed watching his energetic body language, as it was quite comical and commendable.

All in all, he left with Team India now needing to step up to the plate. The night was definitely cooking up. 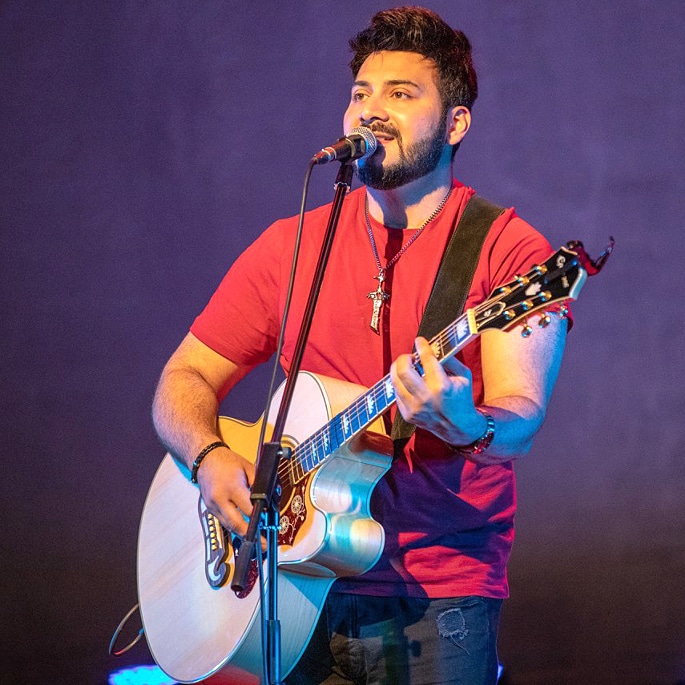 Just before the mid-session interval and before everyone left their seats, there was an important message by charity workers from ‘Forgotten Women.’

Considering the light-hearted nature of the evening, this was a timely reminder of how fortunate and unfortunate some people are.

During the evening, generous donations were pledged by people.

Shorty afterwards everyone had a chance to get some refreshments and enjoy the bar. Catering to a diverse audience in attendance, both alcoholic and non-alcoholic drinks were served.

After refreshing themselves, audiences got to enjoy some entertainment from talented musician Irfan Ahmed.

Irfan played the guitar, along with singing romantic desi songs of his own and classics such as ‘Chura Liya’ from Yaadon Ki Baraat (1973).

With the music having relaxed everyone, the comedians were raring to go for the second half of the show. 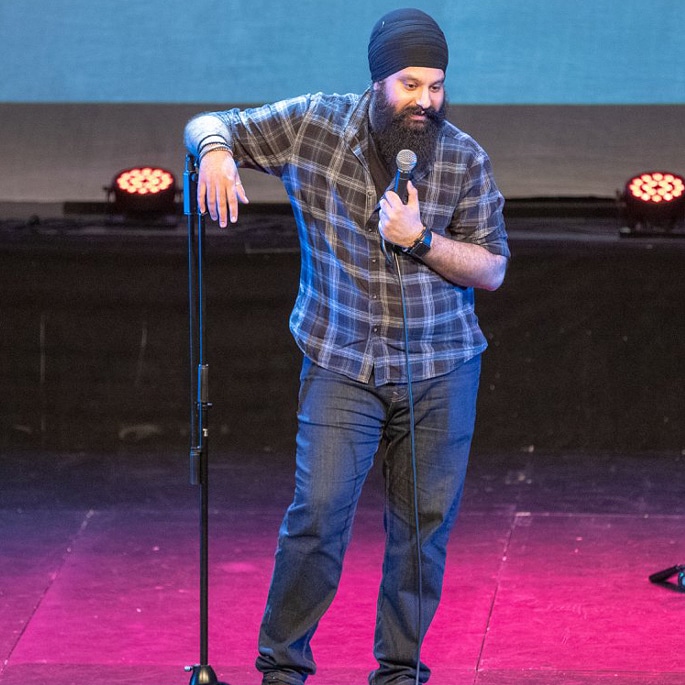 Hyde Panaser from Team India immediately joked about his appearance as he came onto the stage. He sulked on everyone teasing him about his beard reaching his belly button.

Hyde revealed he did not feel embarrassed about living at home with his parents.

He considered this as “looking after his investments.”  The crowd burst out with laughter to this.

Hyde continued saying that most people can relate to the fact that their investments are related to an “extension here, extension there, extension everywhere.”

However, he jokingly warned:

“Bring on a Mr Singh for a DIY show, it will quickly turn into a DIY SOS.”

He then turned to jokes about his own people’s drinking habits.

The crowd could not control their laughter, let alone their drinks, as they applauded him away. 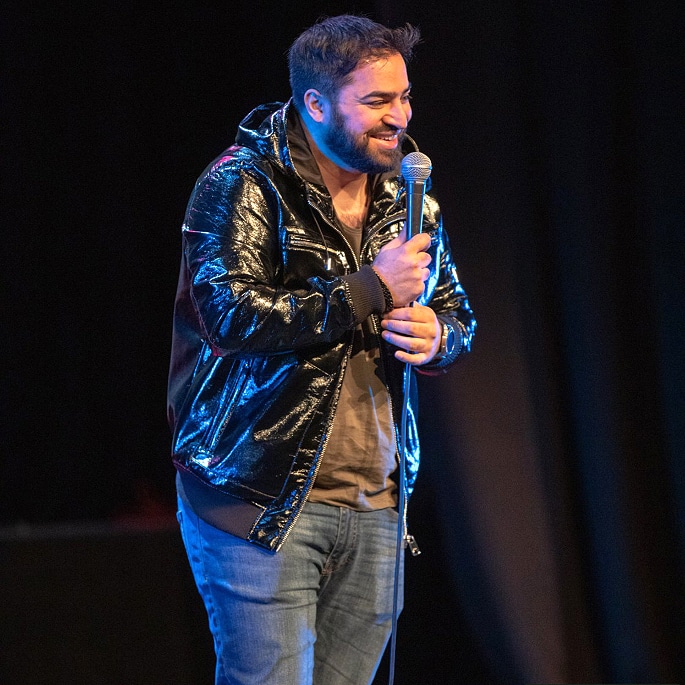 Aatif Nawaz is a real talent and was a super hit on the night.

He was flamboyant yet classy. His jokes were relatable to the entire audience it seemed, grasping their attention immediately.

Aatif noticed someone from the audience was constantly filming him. He asked for his name and said: “Ryyan you don’t need to keep filming.”

But he continued to do so. Aatif felt this was a good opportunity to catch his prey.

Aatif then said: “Ok you can keep filming me – turn the camera onto me more.”

As the male gentleman was filming and falling into his trap, Aatif jokingly confessed:

The crowd burst with laughter, with Aatif getting his own back. The individual quickly put his phone down much to the amusement of the audience.

Aatif’s material was unique and refreshing.

On stage Aaatif also announced that a comedy sketch show of his will be aired on BBC 3.

As Aatif left the stage and the battle between the two nations had finished, the audience had a little breather.

The contest ended on a peaceful level note. The comedians put up a fighting show for their respecting teams. Not one act failed to disappoint.

Even though it was very late into the evening, all the comedians were brought back on stage with the crowd going wild with their cheers.

Appreciating their efforts, everyone got to celebrate similarities and differences. 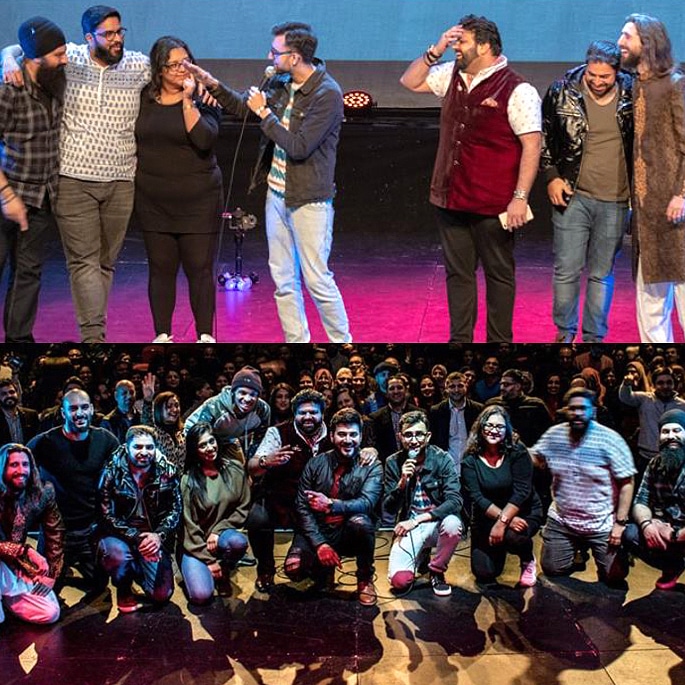 A crowd selfie was taken, bringing everyone to unite shoulder to shoulder as one. This picture truly reflected the whole atmosphere of the night.

Up and coming comedian Raj Poojara,  who is hoping to represent Team India in the future, told DESIblitz:

“I’m proud to see such great talents from both country’s, its motivational for me.”

Whereas Marium of Bengali origin said:

“We all had a laugh but what Salman was able to achieve was unity through laughter and that is what it’s all about.”

‘Breaking barriers through Laughter & Love’ definitely did live up to the billing.

There are preconceptions that come with being Asian and it’s cross-cultural confusions.

But nothing was out of bounds in this comedy zone as everyone sat next to each other in harmony.

Overall, the India vs Pakistan comedy clash was a great community event, with everyone already looking forward to the next organised by PYE  – perhaps we will get to see comedians representing more countries next time around.

DESIblitz congratulates Salman Malik and his team for organising a lovely event, which was not just not peaceful, but very funny also.

Sarwar is a Business graduate. He works in Banking yet is a part-time actor and model. He loves sports and travelling. His motto in life is “First you ‘L’earn, then you remove the L to earn!”