Pakistan’s renowned painter and humanitarian, Jimmy Engineer has yet another international exhibition promoting peaceful relations for the country, labelled ‘Cultural Harmony Between People of Pakistan and Thailand’.

"I call myself the servant of Pakistan, because that is what I am."

They say an image is worth a thousand words; a motto, artist and philanthropist Jimmy Engineer has taken to heart. Internationally renowned, his thought provoking paintings aspire to promote better international relations from Pakistan to the rest of the world.

Over 2000 paintings, 1000 calligraphies and 20,000 prints hold testimony to a lifelong ambition which has already been shown in Sri Lanka, Indonesia, Singapore, China and the UK.

Jimmy was born in Loralai Pakistan in 1954. After completing his schooling and three years study at the National College of Arts (NCA) in Lahore, he moved to Karachi where Engineer still resides today.

Jimmy became a professional artist and painter in 1976, yet he did not allow this label to create boundaries within his work and inspiration. 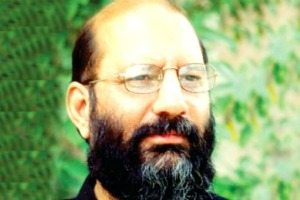 Jimmy realised his love for people especially those in unfortunate situations. He describes himself as a social worker as well as an artist devoting part of his life to helping those in need.

During his career, Jimmy has explored an array of artistic styles, from realism to still life, abstract and calligraphy. He also experiments with different textures and has displayed his work on numerous textures such as canvas, wood and ceramics.

Despite already garnering attention for his amazing versatility, Jimmy’s ultimate goal is for the viewer to gain a better insight into Pakistani art, culture and politics.

He describes himself as a multi-layered artist, extending his canvas far beyond all that is material: “I prefer to be acknowledged as a simple mortal who cares for the human kingdom with a passion.”

This same passion has been waging a war within him for over twenty-five years, alternately translating into coloured imagery or humane deeds to support miserable souls. 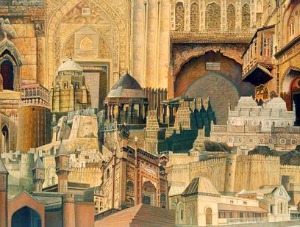 His latest exhibition, Cultural Harmony Between People of Pakistan and Thailand took place at the Bangkok Art and Culture Center in Thailand.

The exhibition, in collaboration with the Embassy of Pakistan, ran from June 27 to July 7.

The collection on display includes a mixture of landscapes, calligraphy and self-portraits with religious and historical undertones.

Jimmy believes his artwork serves as a cultural bridge, spreading his country’s identity and values in the pursuit of enlightenment and the exhibition hopes to promote the long-term relationship between the two countries.

The new exhibition adds to his already internationally renowned status with the artist already having collections in Italy, France, Switzerland, Russia, India, China, England and the USA.

The artist says Pakistan has been unfairly given a negative image abroad due to the wave of terrorism and Islamic fundamentalists that has consumed the media. Thus for him, it is imperative to promote the beauty of Pakistani identity and merge all cultures for the common good of humanity:

“I have traveled all over the world, talking to people, showing my work and telling them that we are not all extremists. We are artists, lecturers, doctors and scientists. It became my mission to travel all over the world creating a positive image of Pakistan.”

For Jimmy, this goal dates back to the early 1970’s, when he had started having nightmares of violence and bloodshed. It was these bad dreams that encouraged several of his most striking art pieces, depicting the suffering and hardships of Muslims whilst migrating to Pakistan after the Partition in 1947. 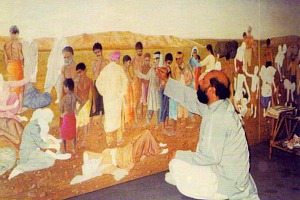 Besides the massacre of the partition, Jimmy also painted poems of Allama Iqbal, on the request of Iqbal’s son: “I call myself the servant of Pakistan, because that is what I am,” says Jimmy.

World peace is something that is generally seen as an unachievable goal in our lifetime. For Jimmy, it’s an ideal that cannot be achieved by words alone.

His life has revolved around supporting troubled individuals as well as social care institutions, using his art to bring a sort of ‘creative peace’ to humanity. He is a crusader not only for Pakistanis but for many human rights issues involving the oppressed, disabled and impoverished.

Engineer’s art can communicate with people from all backgrounds and walks of life. He has arranged more than 140 awareness programmes for handicapped, blind and orphaned children around the globe.

His humanitarian efforts earned him the Star of Excellence (Sitara-i-Imtiaz) in 2005, the third highest civilian honour in Pakistan. In 1988, he was also awarded the National Endowment of Arts Award for his internationally recognised works.

Natasha is an English Literature and History graduate. Her hobbies are singing and dancing. Her interests lie in the cultural experiences of British Asian women. Her motto is: "A good head and a good heart are always a formidable combination," Nelson Mandela.
Shimla ~ The Lovers Destination
The Pakistani Wedding Ceremony