Following the release of Amazon Echo in October 2017, Google has joined the Indian smart speaker market with the launches of Google Home and Google Home Mini.

Google Home can do all sorts of tasks, including reading out food recipes!

Google has launched both Google Home and Google Home Mini smart speakers via an official event in New Delhi on Tuesday 10th April 2018.

It’s an important launch for the search giant as the Indian market poses various challenges due to the sheer amount of localised languages in the country.

In comparison, Amazon’s Echo smart speakers were launched via an invite-based system in October 2017 before being made available online and offline retailers in February 2018.

This creates problems for technology companies to create a smart speaker that works with all dialects and languages in a one-size-fits-all format.

Hindi, a widely spoken language in the country has been rolled out on Google Assistant in March 2018.

Compatibility for Hindi will be available in late-2018 on Google as well as the language being used on Google Home and Home Mini.

When it comes to features, there is no shortage of options that it is able to achieve for such a small device.

Activating the speaker is simple as using your voice in which it can stream music from services such as Gaana, Savvn and Google Play Music.

That is only scratching the surface as it can control smart devices, read emails, offer food recipes and give up-to-date traffic details.

It can also give the user a breakdown of their daily schedule of tasks to complete, which is surprisingly handy for organising an individual’s day. 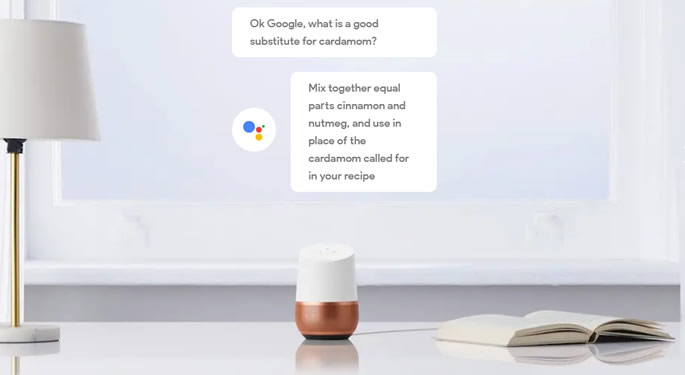 Google is working on ‘Actions on Google’ for India where it invites developers to build voice apps on its platform.

Amazon, however, has already beaten Google to the punch with their equivalent platform, ‘Alexa Skills’. Alexa Skills currently has 15,000 independent developers who are honing the use of the e-commerce company’s personal assistant, Alexa.

There is an array of localised, voice-based Alexa apps that extend across Indian cultures and hobbies.

These apps range from cricket fans chants, Bollywood quizzes, Indian flute music and cooking instructions to name but a few.

One product that has not been launched alongside Google Home and Home Mini is Google Home Max.

Home Max is Google’s answer to Amazon’s Echo Plus. Although the company has been silent on a potential launch in India.

What is interesting about Google’s pricing for Google Home and Google Home Mini is that it’s similarly priced to Amazon’s Echo and Dot smart speakers.

It is going to be interesting to see how smart speakers and voice-controlled assistants become a major part of the Indian lifestyle.

Apple’s Siri and Microsoft’s Cortana are also part of the personal assistant marketplace alongside Google Assistant and Amazon’s Alexa.

Who knows, we could all be using Google Home in the future to order food, and buy clothes and technology online all with the power of the human voice!