The first look poster of Sanjay Gupta’s Jazbaa has been released featuring Aishwarya Rai Bachchan. Gupta tweeted the poster while in Cannes, where the film will be officially launched.

The film is being officially launched at the Cannes Film Festival.

The Queen of Bollywood, Aishwarya Rai Bachchan is returning to our screens in October 2015.

Starring in Sanjay Gupta’s Jazbaa, images of Ash’s ‘First Look’ have been making the rounds on social media.

The film poster sees Ash on her hands and knees covered in dust while looking distraught by the devastated city skyline behind her.

With an eerie green filter, the poster is both dark and thrilling.

J A Z B A A THIS IS THE FIRST LOOK POSTER. pic.twitter.com/jijvy2Ppdn

The film is being officially launched at the Cannes Film Festival, where Aishwarya is currently making her 14th appearance. Director Sanjay Gupta and co-star Irrfan Khan will also be present for the launch. Gupta tweeted to confirm:

Today we are sharing a scene of #JAZBAA at our event in Cannes with the global media. But there will be no cameras allowed. — Sanjay Gupta (@_SanjayGupta) May 19, 2015

But the director added that a teaser will be launched in Mumbai ‘within a few days’.

Guys the teaser of #JAZBAA will be launched worldwide at a spectacular event in Mumbai in just a few days. 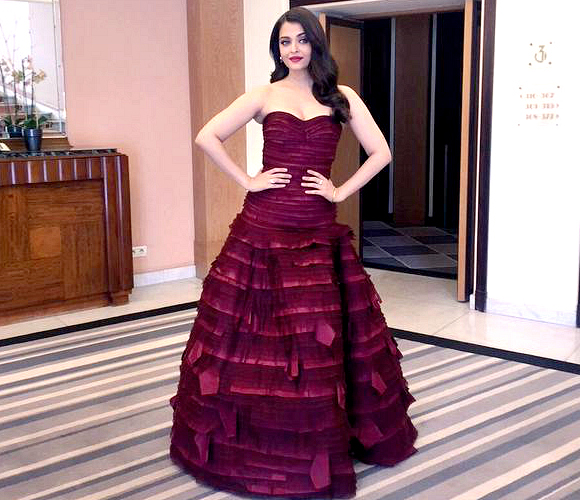 In the film, Ash plays a lawyer who defends a death row convict. Her co-stars include Irrfan Khan, Shabana Azmi and Anupam Kher in pivotal roles. 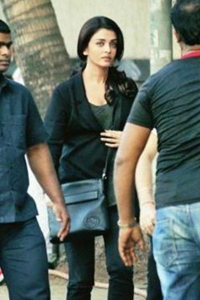 Gupta also confirmed: “Irrfan will play a pivotal role in the film along with Aishwarya, but the role is not opposite her.”

The female-oriented film is a remake of a South Korean crime drama, called Seven Days (2007).

Jazbaa is the first film the 41-year-old is appearing in following a five year absence. Her last release was Guzaarish in 2010.

Aishwarya famously took a break following the birth of her daughter Aaradhya, who is now three years old.

With so much anticipation over Aishwarya’s new film release, the poster has already been trending on Twitter under the hashtag, #Jazbaa.

But fans will have to wait until October 9, 2015, when Jazbaa will finally release in cinemas.

Aishwarya has already been turning heads with her red carpet appearance on Sunday 17th May, 2015. Ash stunned crowds with an exquisite emerald Elie Saab couture gown.

Since then, she has been photographed during her press interviews wearing Stella McCartney and Sabyasachi.

Aisha is an editor and a creative writer. Her passions include music, theatre, art and reading. Her motto is “Life is too short, so eat dessert first!”
Ranbir and Anushka are Golden in Bombay Velvet
Salman and Kareena return from Kashmir