The first film stills of Aishwarya Rai Bachchan in Jazbaa have been released. Directed by Sanjay Gupta, the upcoming film will feature Ash playing a lawyer.

Bachchan plays a lawyer forced to defend a criminal after her daughter is kidnapped.

New film stills for Aishwarya Rai Bachchan’s Jazbaa have been released, showing the stunning actress getting under the skin of her new character.

The latest pics of the Sanjay Gupta-directed film see Ash looking serious, wearing a lawyer’s outfit in a court scene.

Jazbaa, is set to be her comeback film and is also written by Sanjay. The story centres on an attorney forced to defend a criminal after her daughter is kidnapped.

Bachchan, Gupta and Khan even travelled to the South of France to introduce the film at the Cannes Film Festival.

There they unveiled the first trailer of the film at a private screening. Gupta also tweeted out the movie’s first poster, showing Aishwarya on the floor, with the Mumbai skyline behind her. 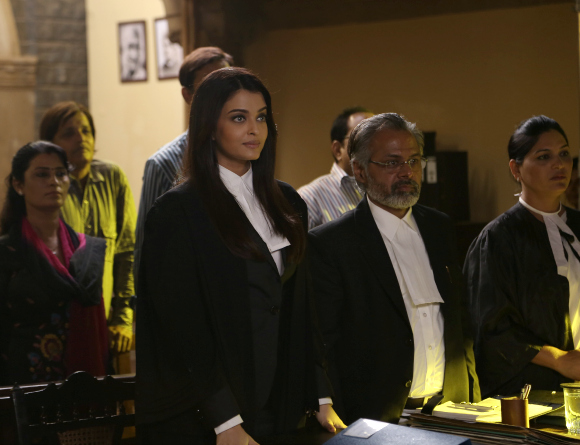 The poster goes against her glamorous image, and the other photographs from the film set show Bachchan looking serious, wearing a lawyer’s outfit in a court scene.

At Cannes, Aishwarya spoke of her excitement at coming back to acting after five years, saying:

“Prior to becoming a mother, I had played a few mature roles, and, of course, you do it to the best of your ability.

“But today, having had the real experience, it touches a deeper core and it’s gut wrenching to act out. 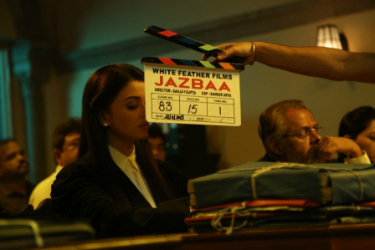 “From the time that your baby comes into the world there’s a switch in your head that says I’m a parent – it’s not something you think about, or learn through books. It just happens.”

Bachchan also said her love of acting has not changed at all:

“Time can’t be a factor that takes that impulse away if your interest still holds.”

Many fans have been waiting for the last few years, eager to see Bachchan return to the screen.

Gupta himself spoke about how inspiring it was to see Bachchan act once more:

“People around us were in so much awe. I was in awe – after all, you are working with the Aishwayra Rai Bachchan.”

Gupta later spoke to fans on Twitter, saying the trailer will air on August 15, 2015, and asked fans to get behind Jazbaa:

Anticipation for Aishwarya’s first film since her five-year break has been steadily building.

She was previously going to star in Bhandarkar’s 2012 film Heroine, but dropped out of the project because of her pregnancy, and was replaced by Kareena Kapoor.

Bachchan’s daughter, Aaradhya, is now three, and so her mother has decided she is ready to return to making films.

With these incredible images from Jazbaa, fans can finally get excited about Bachchan’s return, and soon enjoy her comeback film from October 9, 2015.