Aishwarya Rai Bachchan is a huge Bollywood icon and she always oozes amazing fashion looks. We bring you some of her best.

"This is a fitting ensemble for this image of family bliss"

Aishwarya Rai Bachchan is one of the most recognisable faces in Bollywood for both Desis and non-Desis alike. In her acting roles, she wears some amazing fashion looks to match her leading lady status.

Offscreen, the Indian actress, model and winner of Miss World 1994 has an eye for style, which she has honed over the years.

Of course, her stunning looks earn worldwide attention while her acting ability has entranced audiences over the decades.

We’ve seen her grow from young ingenue in Hum Dil De Chuke Sanam (1999) to maturer roles in Provoked (2006). Similarly, in her personal life, she has married into the Bachchan clan and is a mother to one daughter, Aaradhya.

Naturally, a life in the limelight requires a degree of sense of fashion. Yet, the same sense of development is arguably apparent in her wardrobe too.

Whether family surrounds her or she’s appearing at an international event, the global icon has discovered a knack for age-appropriate but stylish attire.

Therefore, we take a look at 12 amazing fashion looks of Aishwarya Rai Bachchan to recognise the creative brains that work alongside her beauty. 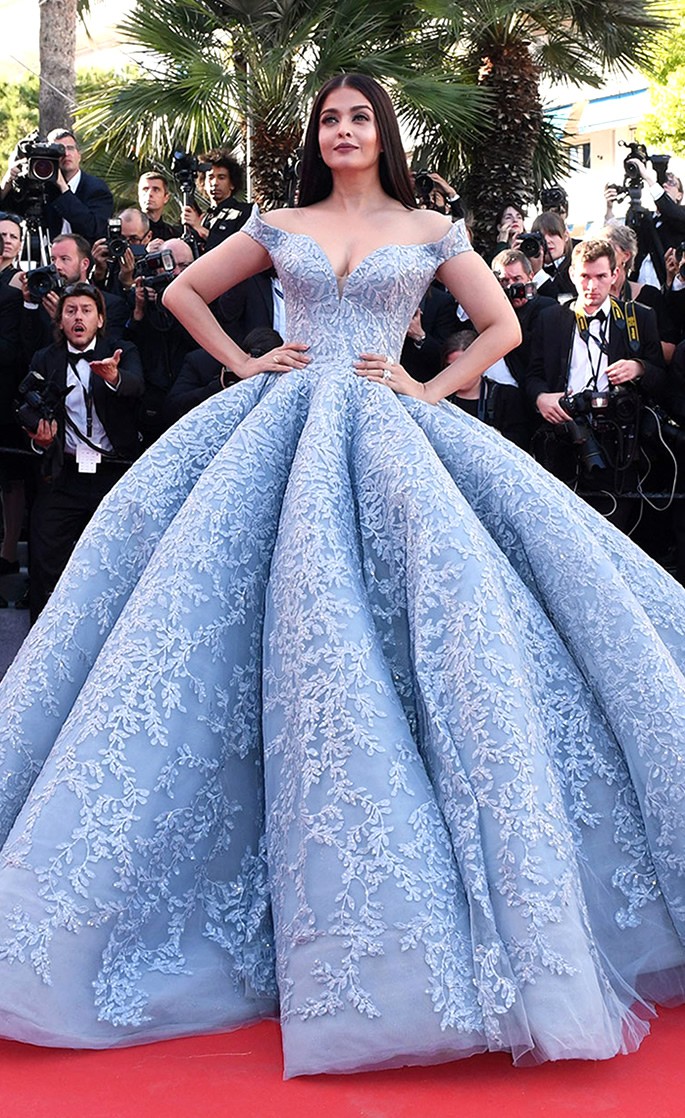 Cinderella goes to the ball, or the beach, in this spectacular gown of Aishwarya Rai Bachchan. The actress entranced the crowds at Cannes Film Festival 2017 with a sweeping dress in the hue of cornflower blue.

Cannes Film Festival is a major highlight in the calendar of many Bollywood actresses like Deepika Padukone, Sonam Kapoor and Kangana Ranaut.

Nevertheless, Aishwarya still shines among all the Bollywood beauties in this breathtaking number.

Detailed embroidery of trailing leaves cover the delicate layers of voluminous skirts, which whittle into a tight bodice to emphasise the star’s tiny waist. 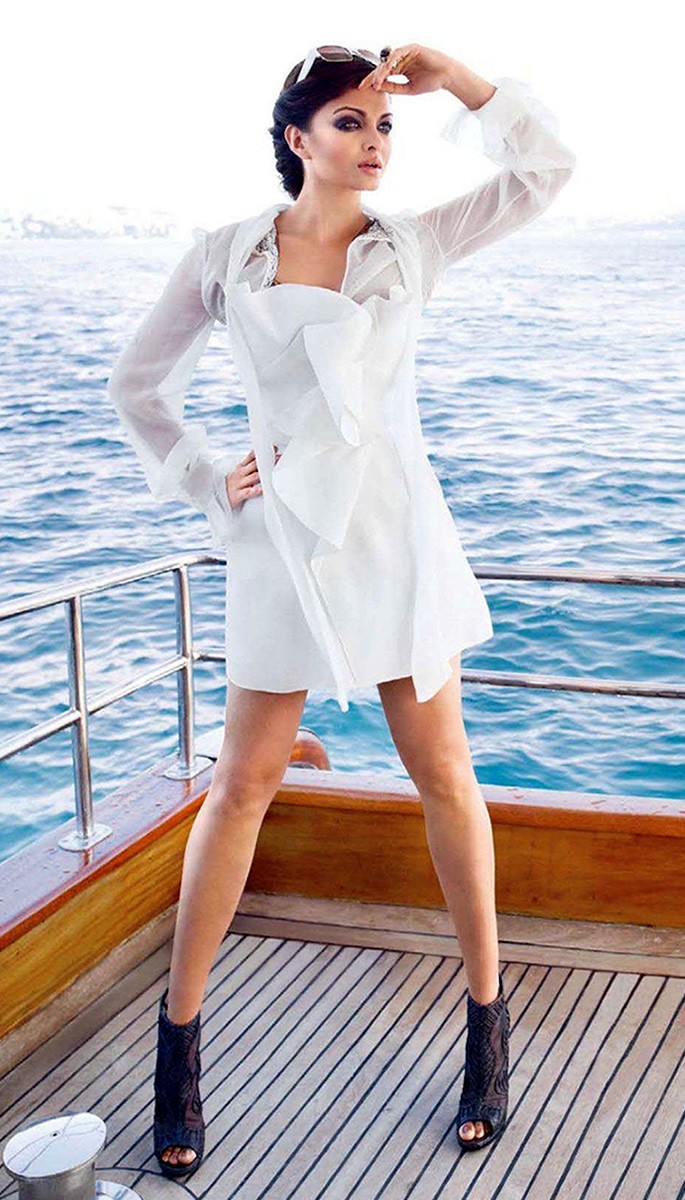 When examining the amazing fashion looks of Aishwarya, she proves that it’s possible to go for glamour in unexpected ways.

In a flirty short dress, she still looks ready for a runway. After all, this is no ordinary little white dress.

Here, Aishwarya Rai Bachchan demonstrates her capacity to uncover a couture spin for everything. The draping of the dress adds theatricality while the sheer sleeves minimise any bulkiness from the extra material.

In this outfit, she dodges any hint of frumpiness to put a fashionable foot, or boot, forward. In fact, her black peep-toe boots create the impression of endless legs and contrast with the ivory.

She sports only a chunky ring to ensure that nothing detracts from the charming cloud of white. Instead, a neat fishtail plait keeps the attention on her unadorned neck, her intensely smokey eyes and movie star white sunglasses. 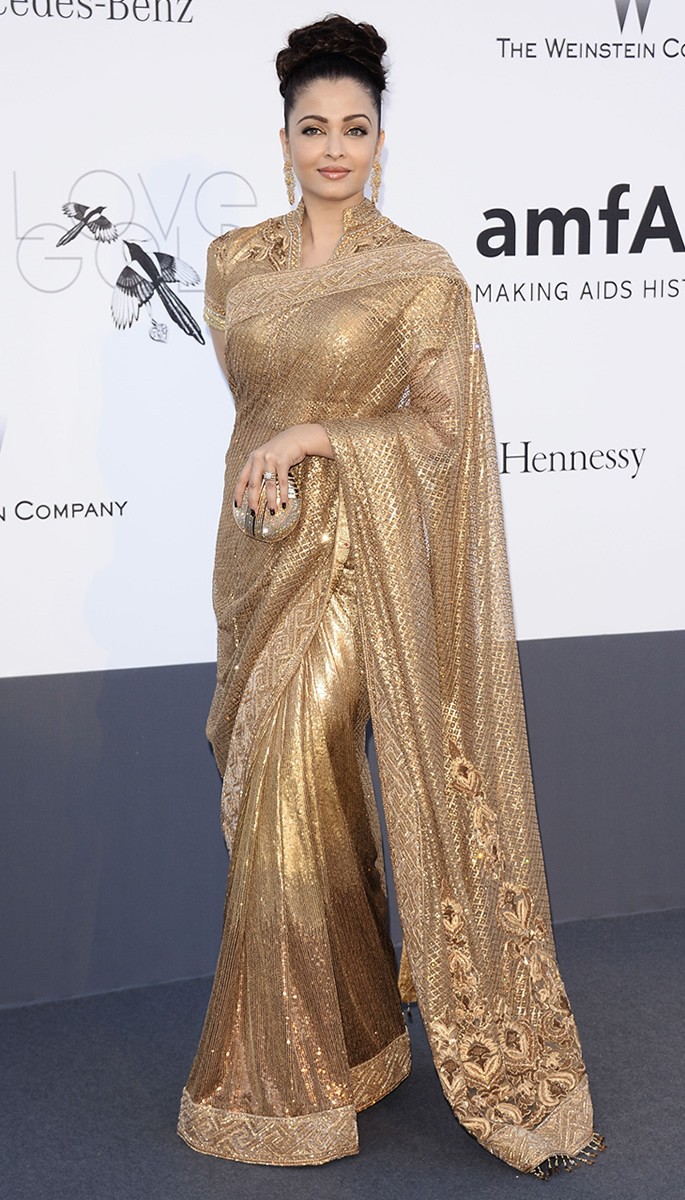 Following one of Aishwarya Rai Bachchan’s earliest appearances at Cannes Film Festival in 2013, she enchants in gold.

In a gorgeous saree at The Foundation for AIDS research gala, she drapes a shimmering dupatta over a shoulder. A delicate golden thread crisscrosses the material while the border features a more intricate design.

From Indian designer, Tarun Tahiliani, the unusual mandarin collar adds a touch of the unexpected to the saree.

Aishwarya finishes this off with a charming small and spherical handbag, held in her impeccably manicured fingers.

A gold dusting covers her eyelids with a thicker liner and long chunky earrings adorn her ears. However, to show off the trinkets, her hair is swept off her face into a full bun on the top of her head.

The sheer extravagance of this outfit cements its place on her amazing fashion looks as it takes your breath away. 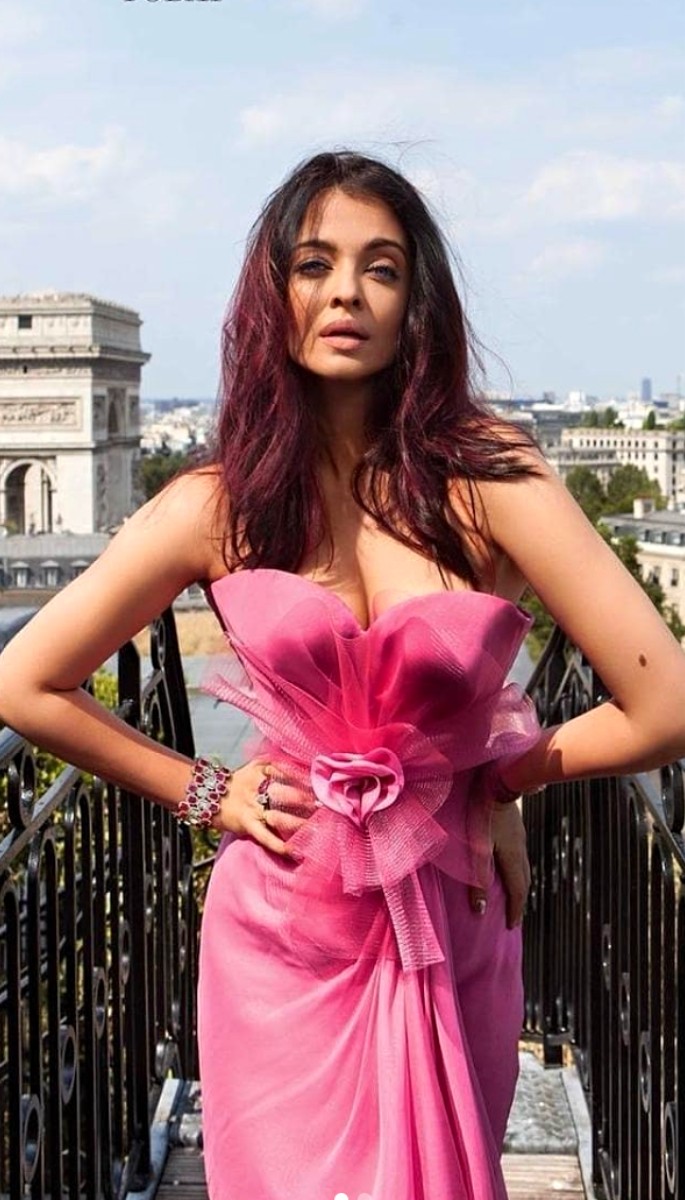 Romance and femininity abound in this highlight of Aishwarya’s amazing fashion looks.

In a fun bubblegum dress, the star evokes the daydreams of many as she poses against the Parisian skyline.

The tulip-silhouette of the dress drapes wonderfully but is flattering despite the risky amount of material around the torso. Forming a pretty flower with gauzy material, it instead lends the dress a more couture feel.

This is essential with the strapless cut and daring neckline. Final elements of chunky rings and a  geometric and jewelled bracelet prevents the outfit from feeling too ephemeral and flouncy. 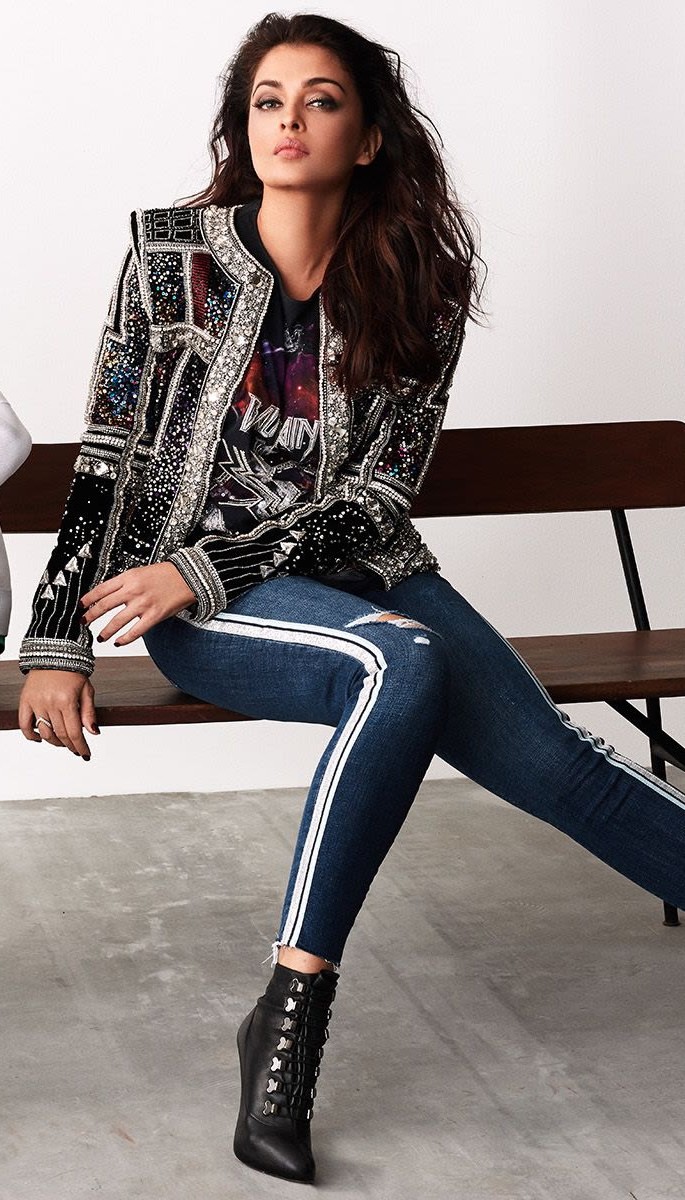 It’s inspiring how Aishwarya Rai Bachchan always suffuses even the more casual of her amazing fashion looks with oodles of glamour.

She elevates the standard blue jeans with rips and frayed hems for a hint of grunge in addition to the broad white line following the length of her legs. This gives the illusion of slimness, which aids the lengthening effect of super-high pointed black boots.

Aishwarya looks almost ready to climb aside a motorbike, especially with the black and white of her logo tee.

Nevertheless, the real star of the show is an absolutely spectacular jacket. Thanks to the embellishment of a multitude of crystals, in varying shapes and patterns, it’s an unforgettable piece.

The broad shoulders add to the masculine stylings of the ensemble. Whereas Ash’s tumbling locks highlight her femininity.

She gazes proudly into the camera, with eyes almost as piercing as the glint of all the crystals on an enviable investment piece. 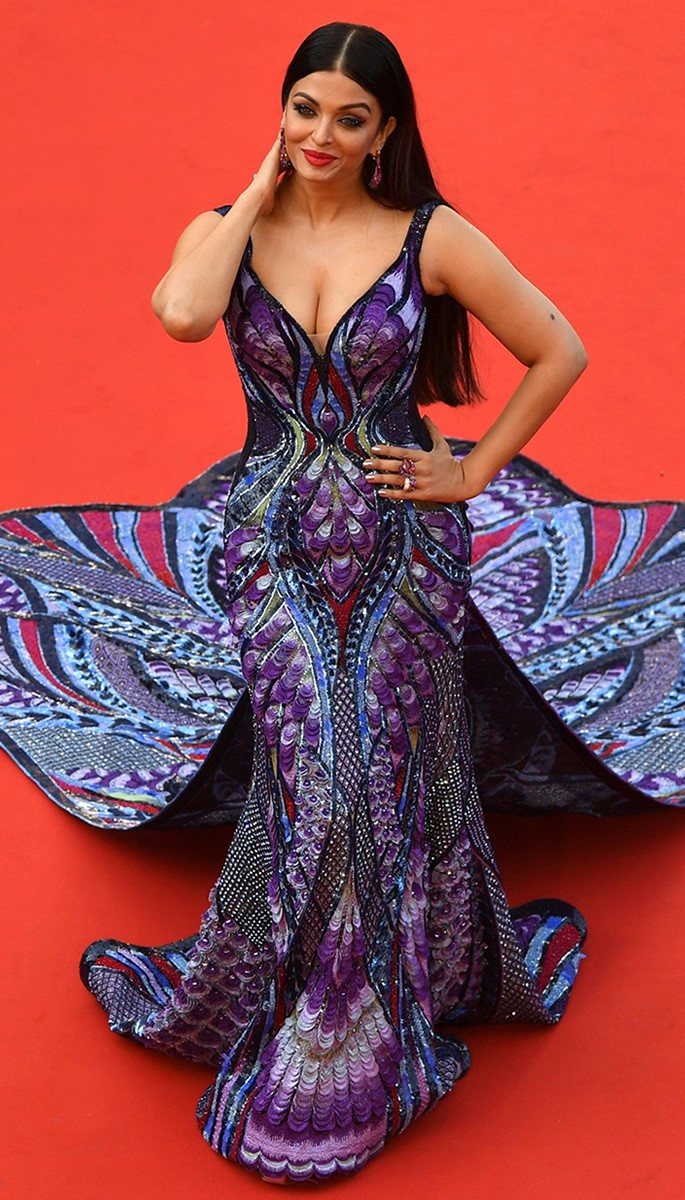 Cinco created the gown “to reflect the impalpable dream of a butterfly metamorphosis” and the 20-foot train hints towards this.

The gown was originally for a Swarovski exhibition and crystals further complement the beautiful butterfly effect of the dress. Taking 3,000 hours to make, alterations to the dress helped make the most of Bachchan’s curvaceous figure.

Thanks to this, the body-hugging silhouette is immensely flattering. Moreover, the clever addition of a sweetheart neckline makes it particularly fitting for the warmth of the French Riviera.

Her makeup is from L’Oréal with the Infallible Pro Matte Liquid Lipstick in Shanghai Scarlet picking up the same deep and rich hues of her dress.

This is the second-time that Rai Bachchan has been the muse for Dubai designer, Cinco. In addition, this is the Bollywood actress’ 17th time at the French film festival.

Undoubtedly, the drama of this nature-inspired design merits a place on the starlet’s amazing fashion looks. 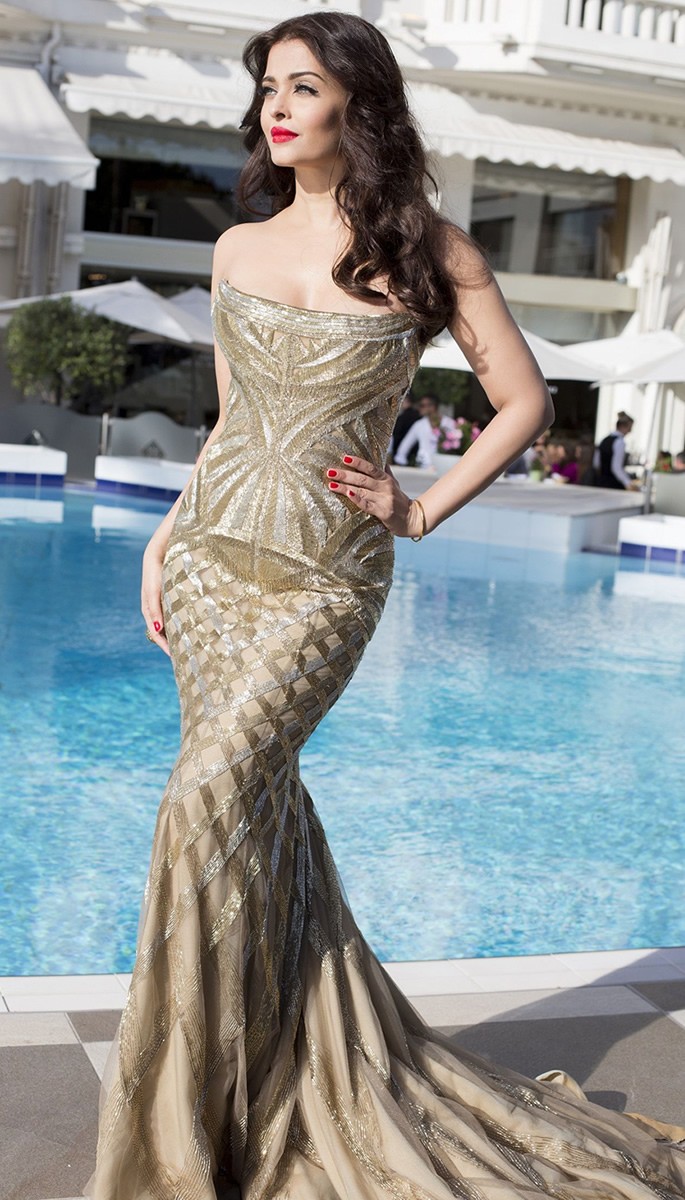 One of Aishwarya Rai Bachchan’s memorable amazing fashion looks is from Cannes Film Festival 2014, which caught the attention of onlookers galore.

The film star wears a majestic gold fishtail dress from Roberto Cavalli to stun audiences all along the French Riviera. This strapless number hugs her figure so perfectly that she could be a bronze figure from antiquity.

Indeed, the clever overlapping of gold and silver on the bodice creates an armour-like effect. It continues down to the skirt of the gown but loosens into a lattice.

Because of this, the skirt retains a wonderful flow and movement, which the actress’ tumbling locks mirror.

The only touch of colour is red nail polish for Aishwarya’s fingertips and on her slightly smiling mouth. She’s as regal as a goddess from old, but this ensemble looks fresh and original.

A Vision in Red 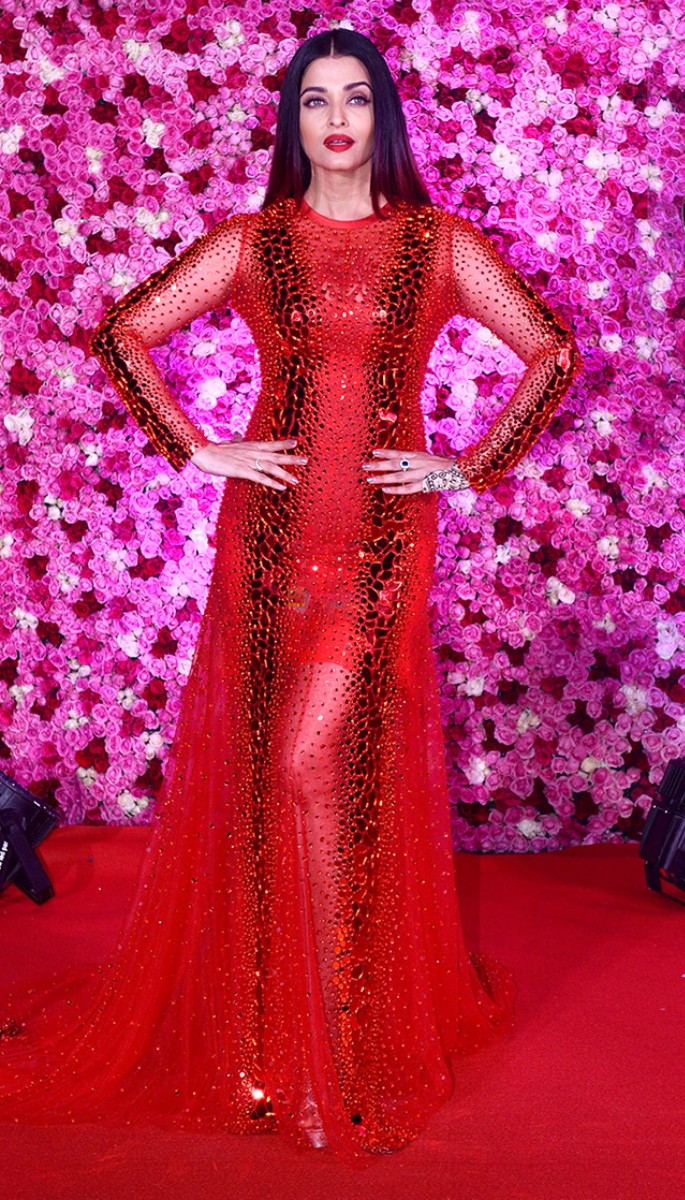 It’s a challenge to reinvent the red-carpet classic of a long red dress, but Aishwarya Rai Bachchan does so successfully here.

For the Lux Golden Rose Awards 2018, there was a whole host of Bollywood stars including Kareena Kapoor Khan, Janvhi Kapoor and Alia Bhatt. While Shahrukh Khan hosted the event, he also presented an award to the former Miss World.

She accepted the Lux Golden Rose Timeless Beauty of the Year award. However, her outfit merits an award of its own. The red is a clever choice considering that the bold hue is the on-trend colour during the Autumn/Winter 2018 season.

The floor-length gown balances its heavy bedazzlement with sheer material. As the dress tapers to the ground and on the sleeves, the reflective sequins become smaller to allow her figure to peek through. 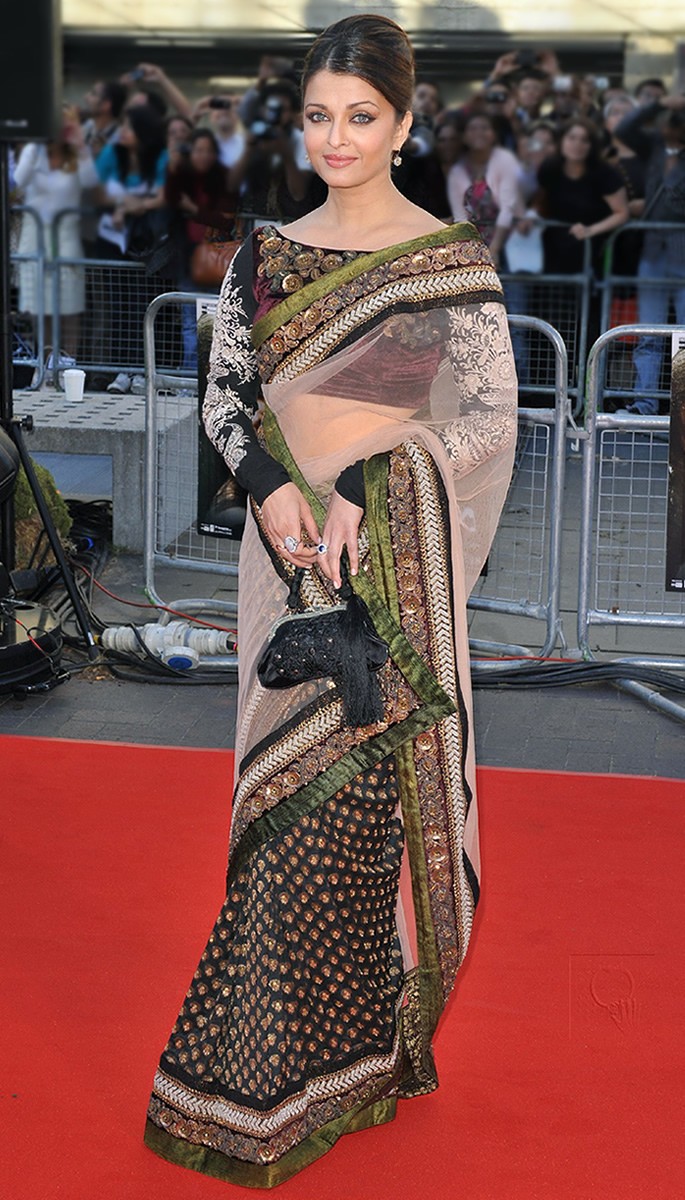 For the London premiere of her film Raavan (2010) with husband, Abhishek Bachchan, Aishwarya wears Sabyasachi.

Aishwarya mesmerises in this intricately designed saree. Her highly sophisticated ensemble earns it a spot on the Bollywood actress’ amazing fashion looks.

The ornate saree from the Kolkata designer has white floral embroidery tracing down her long sleeves. Whereas gold neatly covers an inky black skirt, which matches a black studded purse.

In comparison, Aishwarya Rai Bachchan keeps her makeup to a minimum with a pink lip and extended black eyeliner. Similarly, her jewellery is two diamond drop earrings and a few rings on her hands.

Rather it’s the touch of moss green on her dupatta’s border that provides a unique touch. It’s this pop of colour that elevates this saree to the next level. 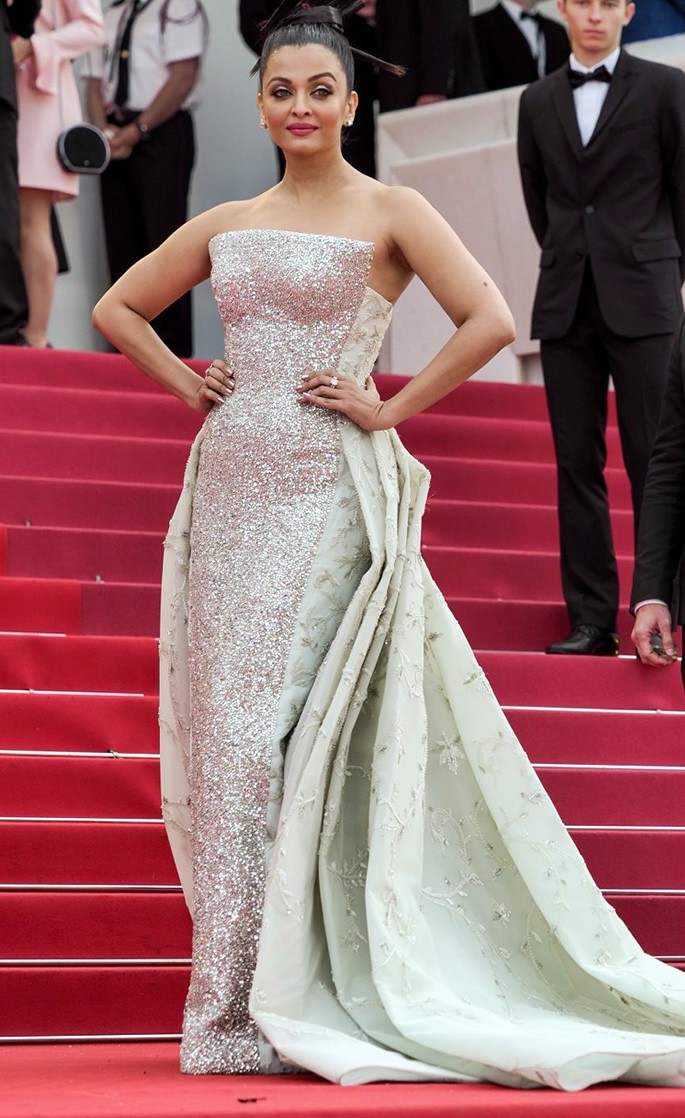 Aishwarya Rai Bachchan certainly has a flair for the dramatic at times, regardless of designer.

While Cannes Film Festival has seen her favour Michael Cinco, here she wears the couture design of Rami Kadi.

Eschewing bright colours and simple hair, this is a more futuristic look from Aishwarya. In a shimming, icy-hued gown, the classic silhouette flatters her curves.

Instead, it’s the neckline that distracts you from realising this, as the strapless design forms a sharp edge to frame her neck perfectly.

A delicately-embroidered wispy green material softens the potential harshness of a solely silver metallic dress. The Indian actress matches her nails to the silver as well as some minimal jewellery of earrings and two rings.

Rather, all the drama is kept for the eyes. Owing to thick black eyeliner, the makeup emphasises Aishwarya’s unusual green eyes. Although, the real drama comes from a sculptural updo.

Such an avant-garde hairstyle shows why Aishwarya Rai Bachchan is the queen of the red carpet. Her tendency towards tasteful yet bold couture is excellent. 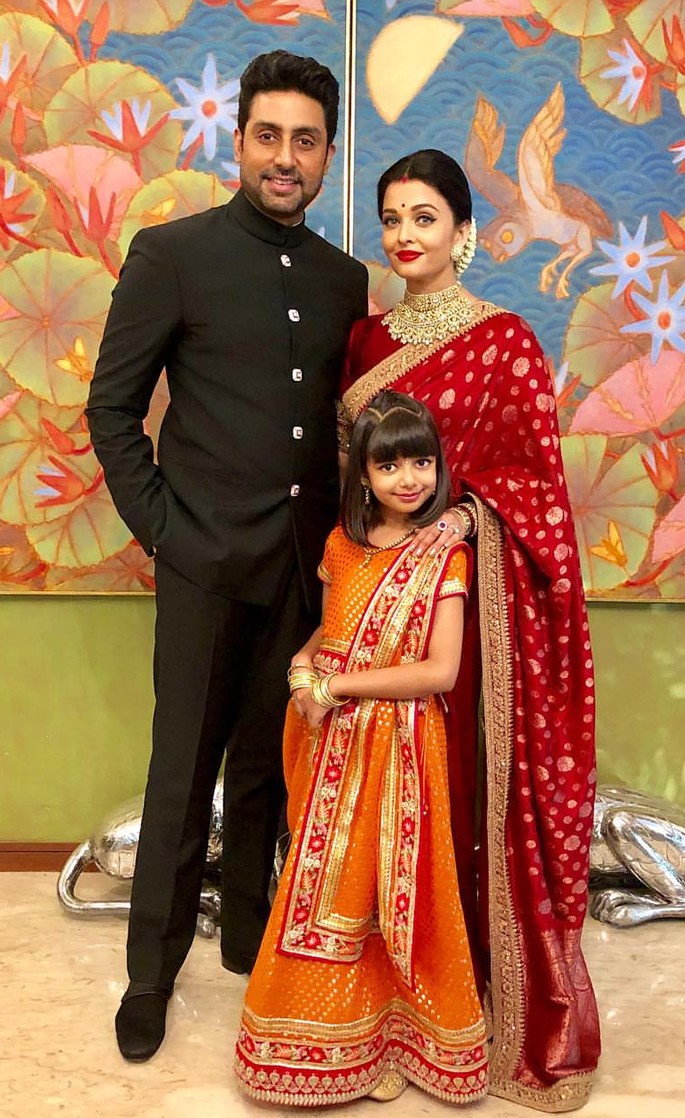 However, here she shows her ability to amaze in a traditional look. As if she’s stepped straight out of her famous role in Devdas (2002), a bright red saree highlights the vermillion at her hairline and on her famous pout.

It’s a relatively simple design but the Sabyasachi outfit looks opulent, particularly with the heavy gold of her jewellery. In comparison to the minimal red bindi, the fan-shaped necklace is incredibly eye-catching.

This is a fitting ensemble for this image of family bliss as the Bollywood star poses with her husband, Abhishek Bachchan. Together with their daughter, Aaradhya, this sweet scene places her as a proud mother and wife, as well as a fashion icon. 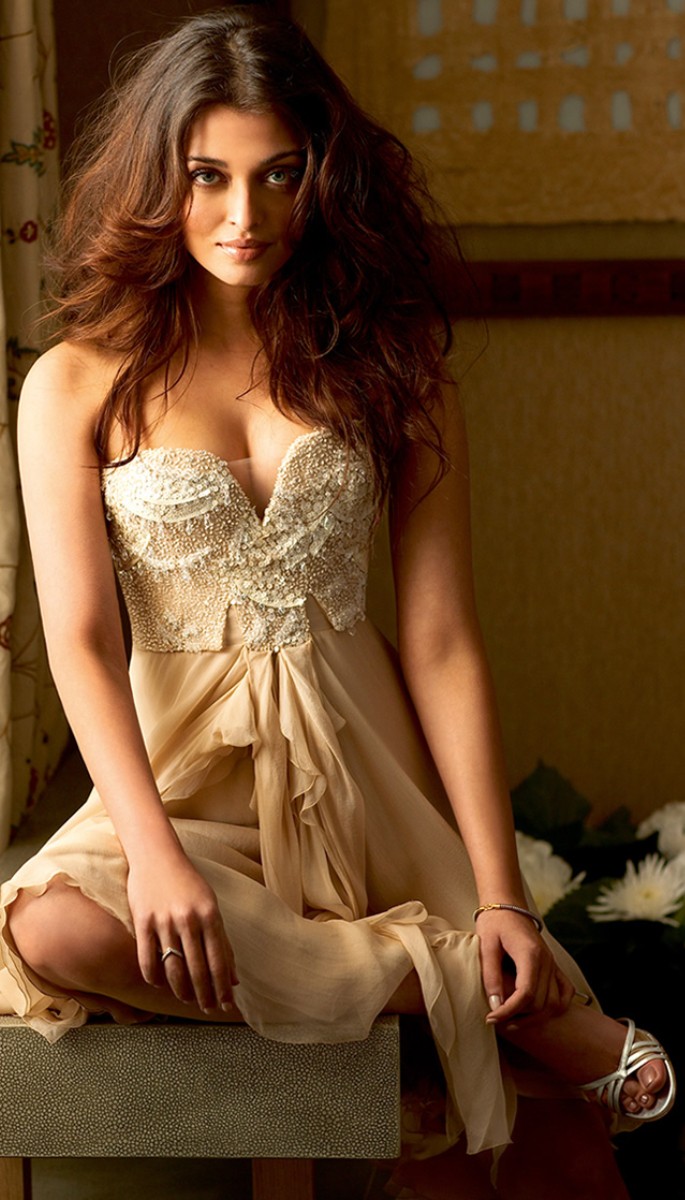 Aishwarya Rai Bachchan typically wows in her favourite polished and feminine styles. On the other hand, we love seeing her in more carefree outfits.

Here, she cuts a striking figure in a nude-coloured dress. The more revealing bodice has an interesting texture with sequins – almost like grains of sand on a beach.

Indeed, the stunning actress has the most enviable beach waves with her tousled tresses. With her flowing chiffon skirt, we can just imagine her strolling along the seashore.

It’s as if she’s been plucked out of a fairytale. Except we don’t imagine that Aishwarya’s impractical, yet gorgeous, sandals will see her beach-bound. Instead, the elegant silver straps form a lovely v-shape akin to the silver ring on her right hand.

She wears no other jewellery other than a slim rope bracelet and a hint of gloss. An enigmatic smile is all the accessory that Aishwarya needs.

This outfit can inspire many from all backgrounds. Since it highlights how simplicity is often the key to a chic look, it deserves a mention alongside her other amazing fashion looks.

Naturally, her striking beauty inevitably attracts attention. But the boldness apparent in her amazing fashion looks impresses and she offers a lot of inspiration for women of all ages.

She seems to always strike the right balance of formality and daring for her environment. Her eternally polished appearance demonstrates how her pageant-winning beauty has the fashion nous to ensure she looks her best.