Cannes International Film Festival is one of the biggest film events of the year, and a paradise for fashion hawks worldwide. DESIblitz are here with our very own Best Dressed at Cannes list; who wore the best ensemble and who failed in the limelight?

This year has proved to be the best for Aishwarya, and she has outdone herself!

Cannes International Film Festival celebrated its 67th year. The annual affair in the south of France saw celebrities fly in from all parts of the world to promote their films and join in the celebrations.

Among all the film buzz, the main highlights of the entire festival were the glamorous outfits! Who wore what?

With the constant stream of celebrities and the continuous flashes it’s hard to notice who stood out from the glitzy mass. That is why we have compiled a list of the best dressed celebs at the Cannes Film Festival.

Aishwarya kept the crowds waiting as she made a late appearance at the Cannes. Nevertheless it was worth the wait as she left jaws dropping!

Well known to be in the eye of critics, Aishwarya rendered her critics speechless as she walked the red carpet. She wore a gold strapless Roberto Cavalli gown, with a mermaid cut; both a graceful and elegant outfit.

She completed the outfit with vibrant red lippy, minimal jewellery and tousled hair. This year has proved to be the best for Aishwarya, and she has outdone herself! 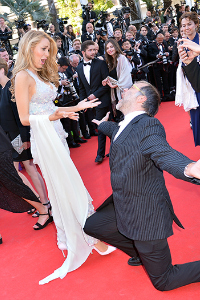 Just her name is enough to excite both media and fashion hawks everywhere. Blake opted for a classic Chanel sequinned couture dress. The gown had a delicate waist and pockets on the side.

With Blake’s golden locks and minimal make up she looked like a princess! Her look was completed with a white shawl thrown over her shoulders.

Sonam is a repeat offender on the DESIblitz Best Dressed list! Testimony to the fact that she never puts a foot wrong, Sonam brought a bit of Desi to Cannes in a sheer gold Anamika Khanna sari.

Draped unconventionally and without any pleats, it gave her a delicate look. She complimented the outfit with a gold and pearl choker, designed by Sunita Kapoor, her mother. She kept her hair loose and held a Ferragamo clutch.

She kept her make up minimal with a sleek low ponytail to offer a sophisticated yet youthful touch. To complete her look she wore metallic shoes, which contrasted her main dress.

Some celebrities narrowly missed the best dressed list, Kendall Jenner looked stunning in her black and white Chanel dress, but she played it a little too safe. Cate Blanchett dressed in a grey Valentino gown, but she blended in to the crowd.

It is not often that stars dress bad but when they do, it’s really bad. On the other side of our Best Dressed fence, Russian actress Elena Lenina proved made a very big faux pas at Cannes.

She wore a shocking pink gown, with no shape and an oversized silver beaded necklace, which looked more like a beaded garland. To finish off she had a high bun that was pulled up so tight that her eyebrows were higher than usual; not one of our favourite red carpet looks.

French actor and heartthrob Yassine Azzouz dressed to impress for Cannes 2014. He wore a black detailed tux but added his own style into it. He wore a gold metallic bow tie and matching gold brooch; this attention to detail made all the difference.

Making all the Desi’s proud, Uday rubbed shoulders with Hollywood’s finest in his first Cannes visit! Not only that, he made sure he dressed for the occasion. He wore a tux, complete with a waistcoat and bow tie, and looked every inch a dapper Bollywood hero. 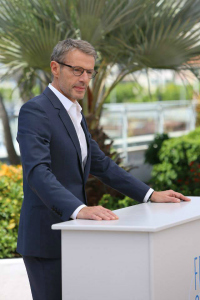 The other half of Blake Lively was just as well dressed. While he looked his usual dapper self on the red carpet in a black tux and white bow tie, Ryan impressed fashionistas worldwide by opting for something a bit more daring during the day.

For his press conference and photo call for The Captive, he wore navy trousers and a light blue shirt, which he paired with a deep brown blazer and tan brogues with no socks, so we got to see some ankle!

To finish off the look, he chose a red and white polka dot pocket handkerchief. We have to say DESIblitz are impressed; Ryan seemed to emanate Ranveer Singh’s eccentric looks perfectly.

On our ‘Worse for Wear’ list however, Tim Roth looked washed out in his drab suit; with all those slick black tuxes around he looked quite scrawny in his grey suit. He wasn’t looking his usual self with messy hair and unshaven face.

So there you have it – some of our favourites from Cannes 2014. Whether they were Best Dressed or Worst Dressed, all these celebrities made the effort to look good, and we just love to watch them in their couture finest.

Yasmeen is an aspiring fashion designer. Aside from writing and fashion she enjoys travel, culture, reading and drawing. Her motto is: "Everything has beauty."