Held in Cannes, the event produces one of the glitziest red carpets in the world. DESIblitz presents the best-dressed stars at the festival.

This year’s schedule has many films to look forward to.

The 75th Cannes Film Festival is taking place, with stars from every corner of the world descending on the red carpet at the Palais de Festivals.

A raft of star-studded premieres for upcoming films are set to take place over the 11-day festival, including Top Gun: Maverick and the biopic Elvis.

The event was cancelled in 2020 due to the Covid-19 pandemic.

It went ahead in 2021 but was subject to strict health restrictions. However, the 2022 opening ceremony returned to its full glamorous glory once again.

Hollywood A-listers including Eva Longoria and Forest Whittaker have been photographed on the red carpet, alongside Hina Khan, Aishwarya Rai Bachchan and Deepika Padukone. 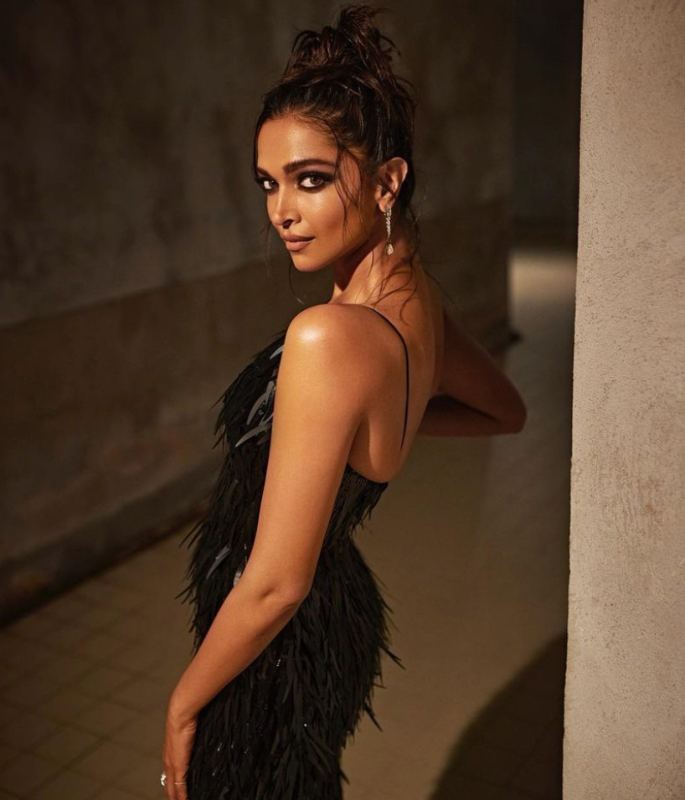 Deepika Padukone walked the red carpet on Day 6 of the Festival de Cannes and once again brought pure glamour to the French Riviera with her jaw-dropping look.

The actress, who is a part of this year’s prestigious film festival jury, made her third appearance on the red carpet.

Paparazzi clicked Deepika arriving at the premiere of the film Decision To Leave at the 75th international film festival in Cannes.

The star chose a custom black Louis Vuitton creation by Nicolas Ghesquière and teamed it with bold makeup choices. 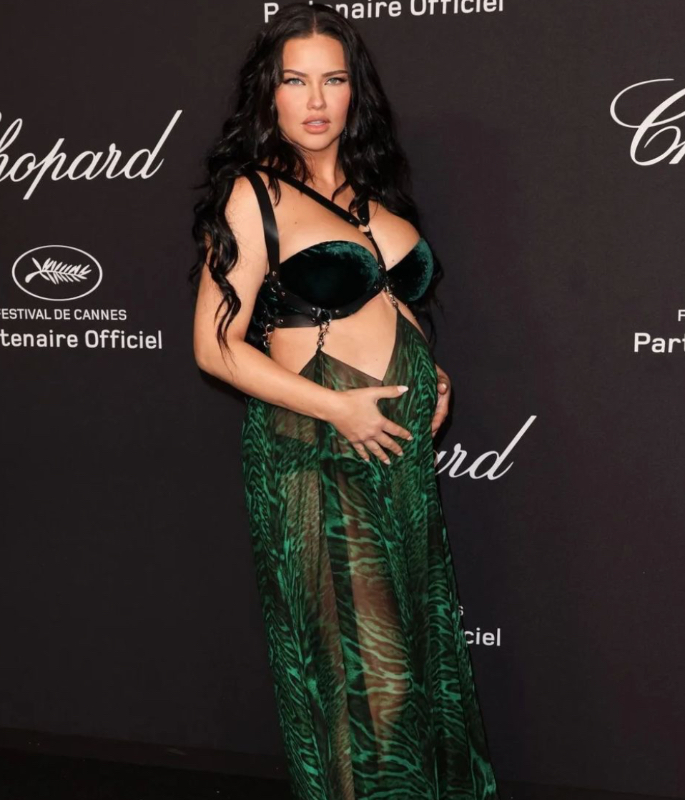 Days after causing quite the stir in a bump-baring Balmain gown, Adriana Lima opted to showcase her pregnant tummy once again.

Arriving at the Chopard Loves Cinema dinner, the model donned a green and black dress from Roberto Cavalli’s fall/winter collection.

The daring number featured a leather harness, attached to a velvet green bra and a flowing animal-print skirt.

She wore her dark hair down and styled in loose waves. 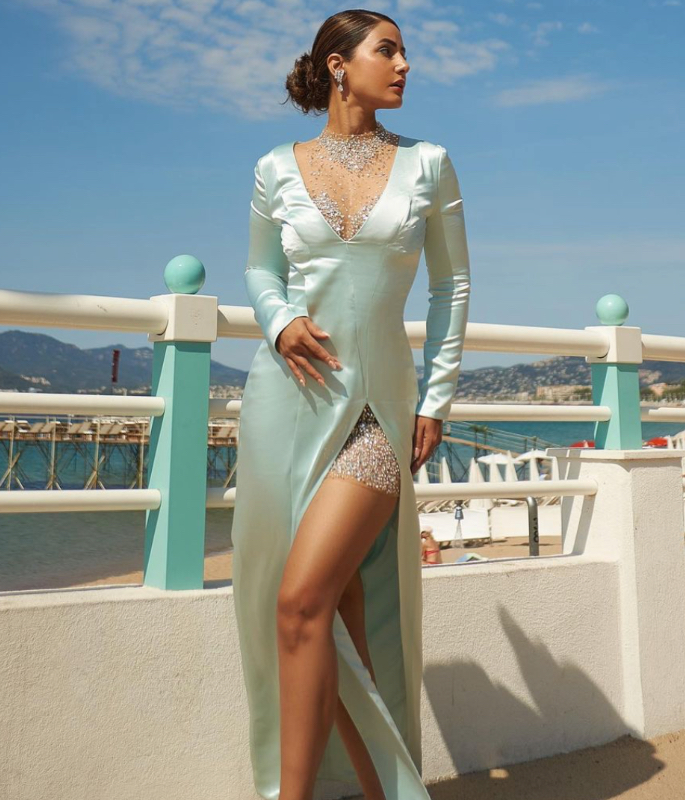 The actor made her second appearance at the prestigious international film festival this year after making her debut in 2019.

She recently took to Instagram to drop new pictures from a photoshoot in the resort town and delighted her fans with another jaw-dropping look.

She donned a turquoise blue maxi-length dress with thigh-high slits for the clicks.

Hina’s turquoise blue gown comes with an attached see-through round neck slip reaching till her thighs and worn underneath. 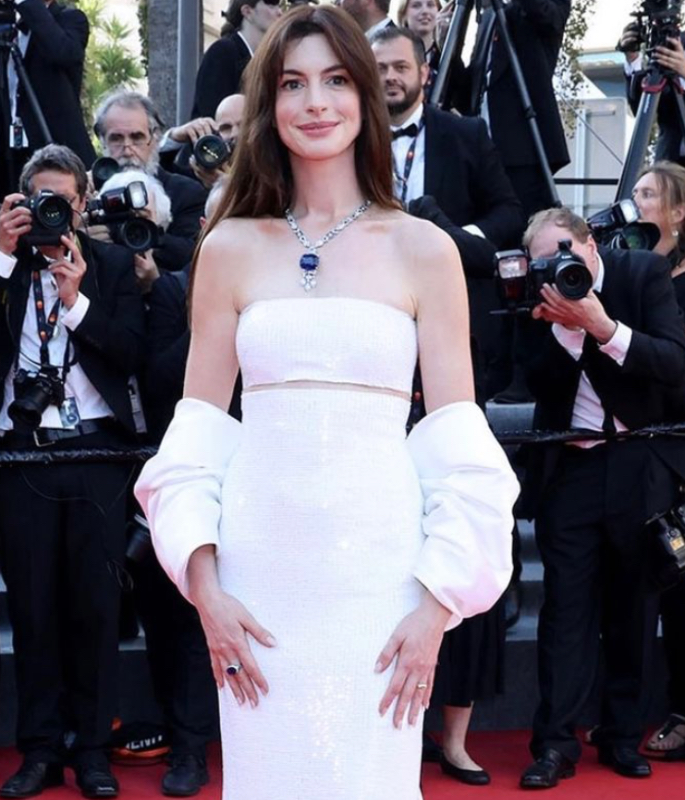 She accessorised her look with the ‘Mediterranean Reverie’ necklace from the designer’s jewellery collection, which features a large cushion-cut sapphire at its centre. 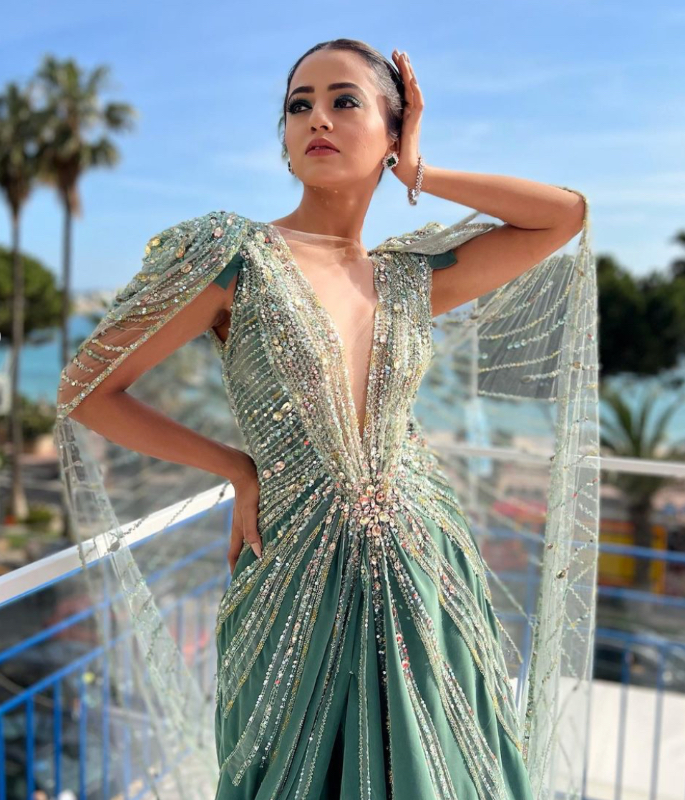 Her pastel-hued ensemble had a plunging neckline, shimmering diamantes on the front and back, and a stunning floor-sweeping train. 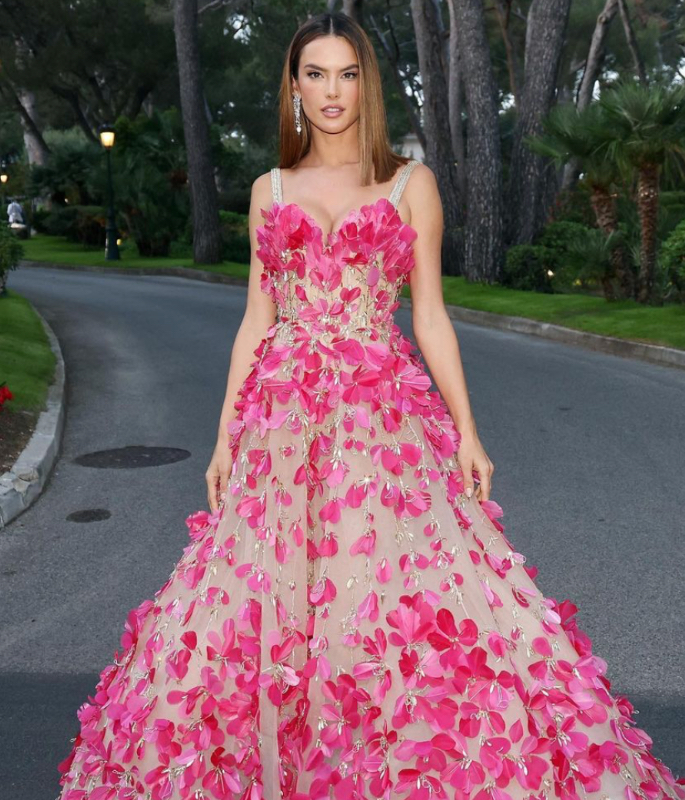 She accessorised her look with minimal jewellery and wore her hair in a sleek, straight style. 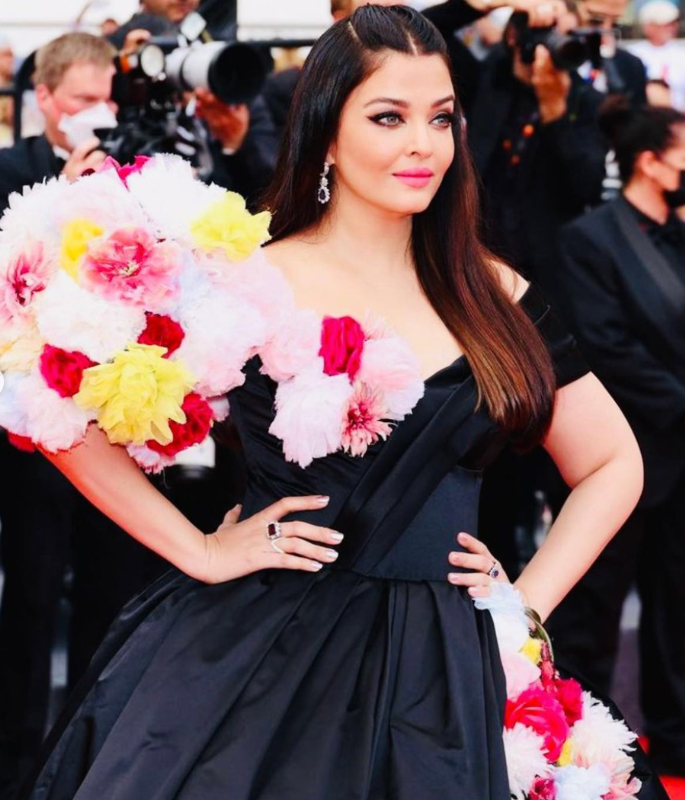 Always the one to make the red carpet traffic stop at Cannes with her stunning looks, Aishwarya Rai Bachchan is doing the same at the 75th edition of the Cannes Film Festival.

To attend the premiere of Top Gun: Maverick, Aishwarya walked down the Cannes 2022 red carpet in a black gown that came with a voluminous silhouette, sexy off-shoulder detailing and pleats.

It featured a burst of 3D florals in multi colours as an extension on one sleeve and then from the waist down in the centre.

She accessorised her look with a pair of cascading earrings and statement finger rings. 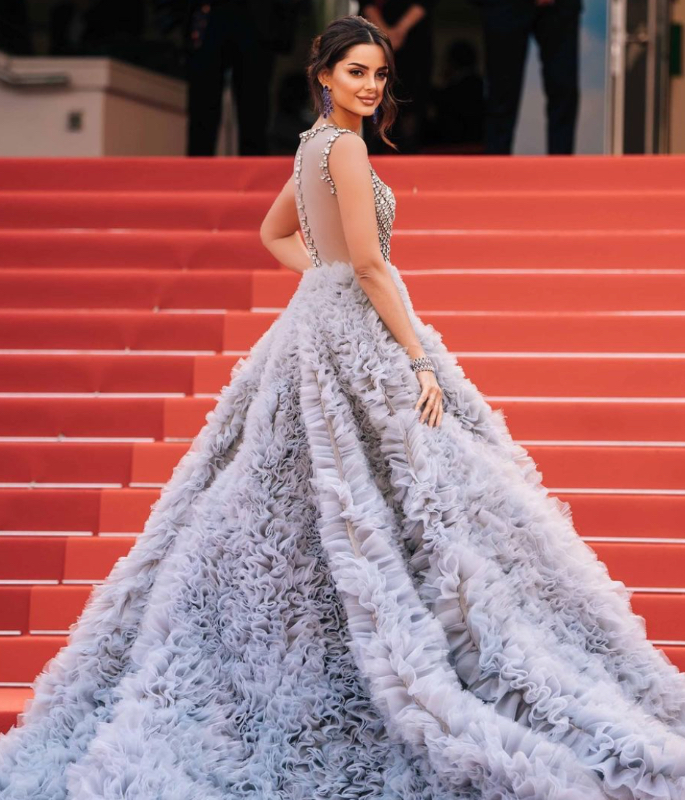 The grey-blue dress featured a sheer torso, covered in large diamantes, while layers of tulle created a large skirt that fell into a train as she walked. 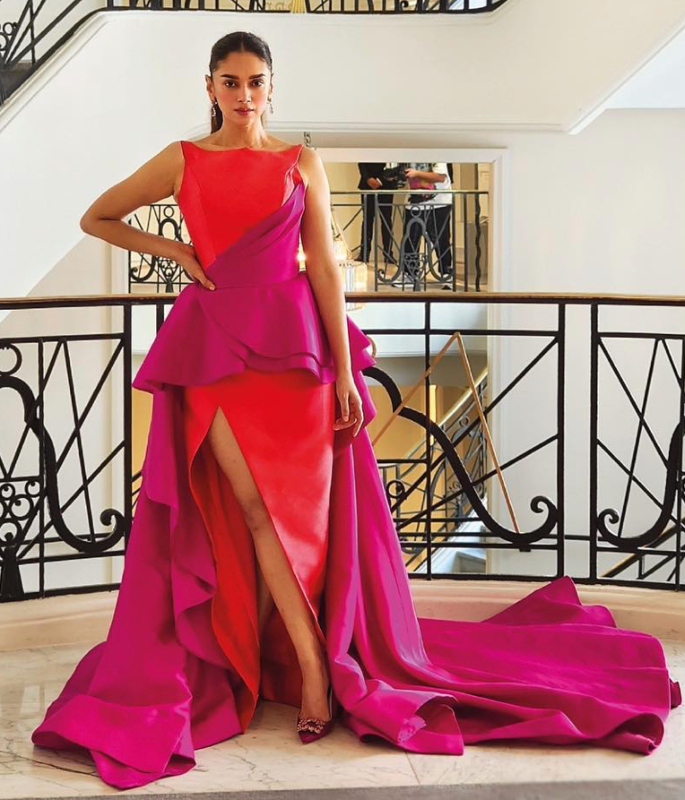 After weeks of teasing her fans with jaw-dropping looks from the French Riviera town hosting the annual Cannes Film Festival 2022, Aditi Rao Hydari has finally made her debut on the red carpet.

The star arrived on Day 5 of the Festival de Cannes dressed in a colourful thigh-slit gown that embraced the pop colours of summer.

She teamed her red carpet look with minimal accessories and embraced simple elegance – an aesthetic she has incorporated in all her outfits while attending the Cannes Film Festival. 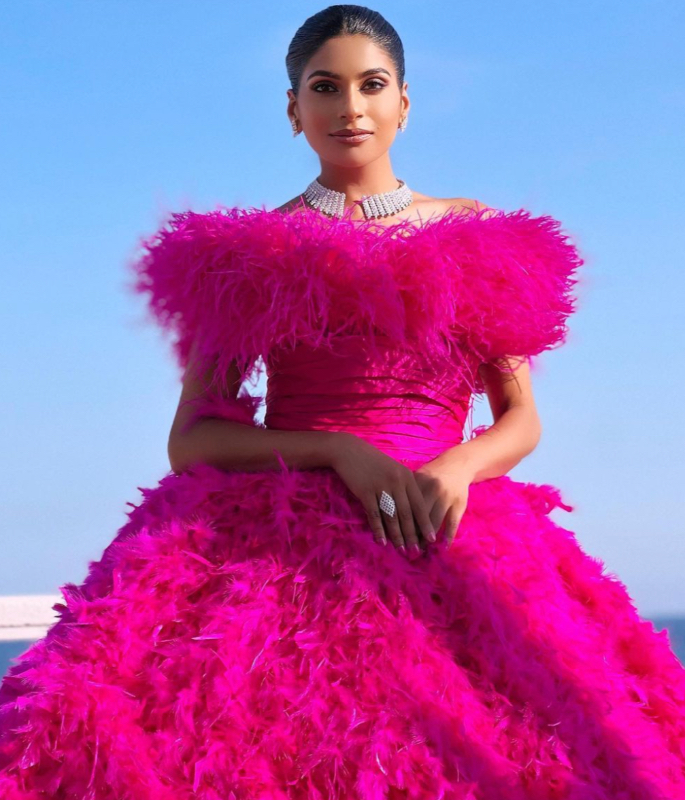 Both the skirt and neckline of the off-the-shoulder dress were adorned in feathers. 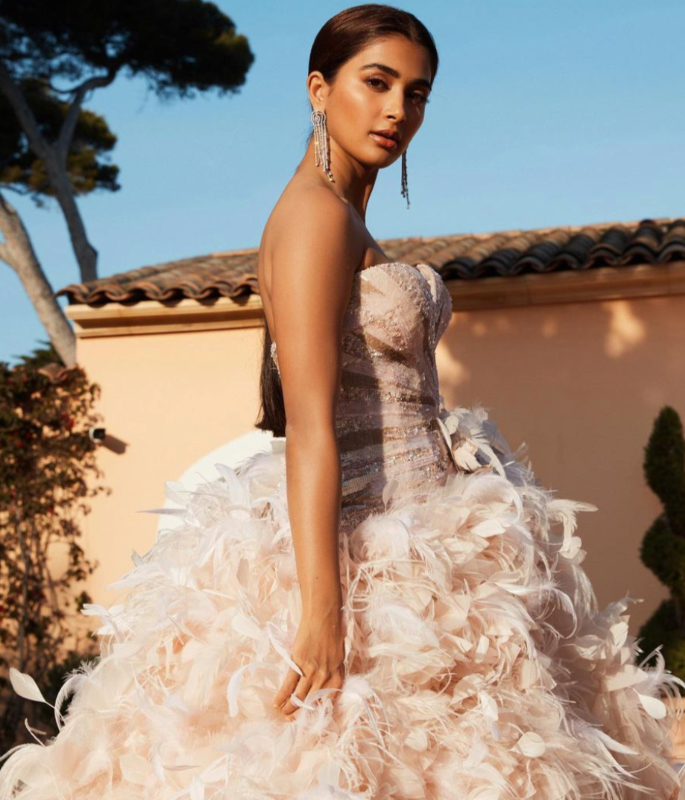 Pooja Hegde looked like a match made in sartorial heaven as she marked her debut at the French Riviera in a sultry sweetheart neckline feathery pink gown as she attended Tom Cruise’s Top Gun Maverick premiere.

Tapping into the glitz trend of the red carpet, Pooja decked up in the dreamy sequinned feathery pink gown and left her fans spellbound as she posed for the cameras.

Taking to her social media handle, the diva shared a slew of pictures that showed her putting her sartorial foot forward.

The pictures featured Pooja Hegde dolled in a striped bustier that was sequinned all over and came without straps but sported a plunging sweetheart neckline to ooze oomph.

Held in Cannes, France, the annual event produces one of the glitziest red carpets in the world, competing only with the Oscars and the Met Gala.

A-list stars will travel over from around the world to climb the event’s signature red steps, rocking their best suits and gowns, which are often custom, haute couture, or fresh off the runway.

This year’s schedule has many films to look forward to, and on the official jury are stars like Deepika Padukone, Rebecca Hall, Noomi Rapace, and Jasmine Trinca.

On day 1 of the festival, several of these jury members kicked things off in grand style.

Deepika Padukone, for one, wore two exquisite numbers by Sabyasachi.

A highlight was the custom, one-shouldered couture saree she wore – inspired by the Bengal Tiger – to the premiere of Final Cut.

Hand-blocked and embroidered, it was a special nod to her heritage.

As the festival progresses, and more films make their grand world premieres, you can expect many more of these spellbinding style moments to unfold.