Bollywood has officially conquered Cannes 2013, with a multitude of legendary stars gracing the red carpet. The festival was declared opened by Amitabh Bachchan and Leonard Di Caprio.

"I have never been more proud to be a part of this creative industry."

The 66th Cannes Film Festival paid tribute to 100 years of Indian cinema. Bollywood was represented by legendary stars at the festival on the picturesque French Riviera.

The opening ceremony saw the stars grace the red carpet at the famous Grand Theatre Lumiere in Cannes.

The Great Gatsby stars, Leonardo DiCaprio and Amitabh Bachchan formally opened the event together. Bachchan got a chance to exercise his French speaking skills as he greeted the crowd. 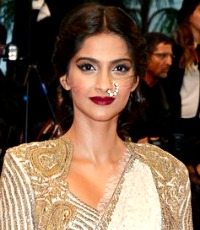 Later he swapped the language of romance to something he was more used to, Hindi, as he decided to directly address his Indian fans and audience.

Following the event, Bachchan later tweeted: “Acknowledging Cannes in recognising 100 yrs of Indian Cinema, it was absolutely imperative for me to address, in my Mother tongue!”

“Director of Cannes delighted to hear the ‘music of the Hindi language’ spoken, it brought in the universality of the occasion!” he added.

“For a complete alien in the midst of Cannes to be acknowledged, is the proudest moment for me as an Indian. The honour and respect meted out by Cannes, incredible. Announcing suddenly for Leonardo di Caprio and myself to open the Festival!”

The Cannes Film Festival will take place over the next 12 days, where it will showcase some of the most ambitious and artistically independent films from around the world. 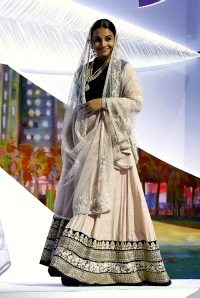 Bollywood will also feature as part of its 100 years celebration. The festival will see a special screening of Bombay Talkies, which was released at the beginning of May.

Anurag Kashyup’s short film, Ugly is also set to premiere at the event. Dabba and Monsoon Shootout which are also co-produced by Kashyup will see midnight screenings as well.

“It feels great to have two of my films this year at Cannes as both are quality films. Working with Dibakar Banerjee in Bombay Talkies was great because he made me prepare a lot.”

This year’s judging panel is headed by none other than Steven Spielberg. He is joined by Life of Pi director, Ang Lee, Nicole Kidman, Christoph Waltz, and our very own Vidya Balan.

Balan graced the red carpet in an elegant maroon and black lehenga-choli and ethnic accessories for the opening ceremony. 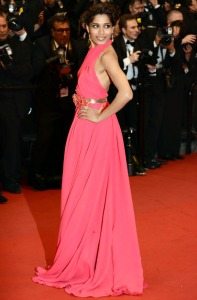 She later donned a delicate black choli and cream coloured lehenga with a netted and embroidered drape covering her head. She is expected to change into a number of traditional outfits and saris for Cannes, designed by her favourite, Sabyasachi Mukherjee.

Actress, Sonam Kapoor also wowed in a white lace sari and golden coat with full sleeves. The ensemble was covered in stunningly intricate white and golden embroidery and is from the Amanika Khanna Couture collection.

Sonam is the brand ambassador of L’Oreal who is one of the big cosmetic brands that is sponsoring Cannes this year. Speaking about her attendance, Sonam said:

“This is the first time I will be part of the opening ceremony and I am extremely excited. Cannes brings together all the aspects of international cinema at one grand platform and this year, it is celebrating the 100 years of Indian cinema. I have never been more proud to be a part of this creative industry.”

Freida Pinto also looked beautiful in a red Gucci floor-length backless gown. She had her hair up and accessorised with Chopard jewellery.

Although being a regular attendee of Cannes, this year will also be Aishwariya Rai Bachchan’s first appearance following the birth of daughter, Aaradhya. Whether the new mother will bring Aaradhya with her still remains to be seen.

The presence of Bollywood at Cannes has most definitely added some va va voom to the International Film Festival.

Bollywood will continue its 100 years celebration for the remainder of the Festival, which is expected to bring even more famous Eastern faces to the scenic French Riviera.

Aisha an English literature graduate, is a keen editorial writer. She adores reading, theatre, and anything arts related. She is a creative soul and is always reinventing herself. Her motto is: “Life is too short, so eat dessert first!”
The Reluctant Fundamentalist ~ Review
Aurangzeb ~ Review