The 2019 Cannes Film Festival is underway and many stars walked the red carpet. This included celebrities from the world of Bollywood.

The prestigious Cannes Film Festival 2019 is in full swing and the stars of Bollywood made the walk down the red carpet.

While some stars had attended the event before, others were making their debut.

It is the 72nd annual film festival and already there have been some memorable moments.

Many stars went for a number of stunning outfits every time they attended a premiere to make a fashion statement.

The likes of Deepika Padukone and Kangana Ranaut made an impact with their bold outfit choices.

We look at some of the Bollywood stars at the event and what they wore. 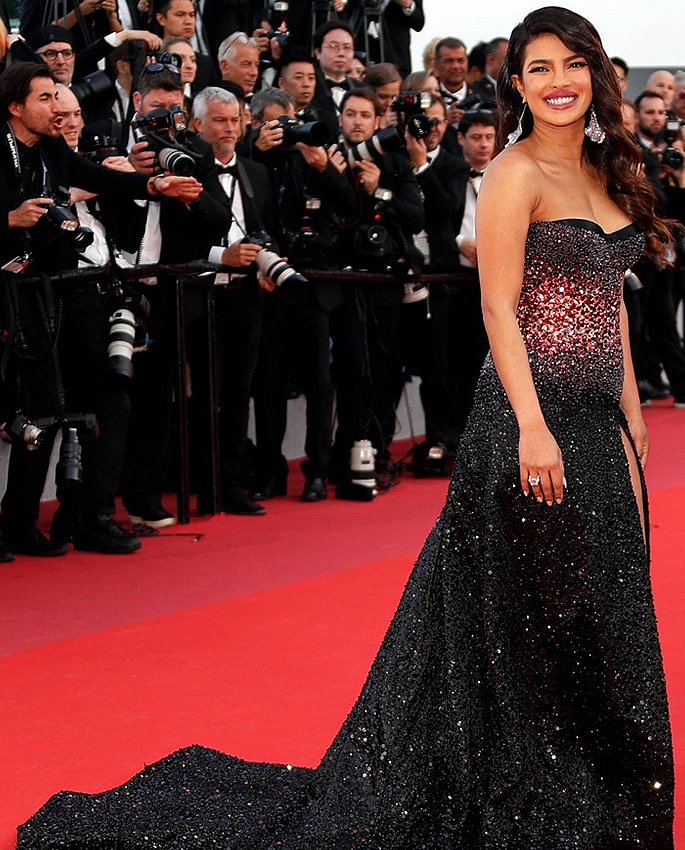 It may have been her debut but Priyanka Chopra knows how to make an impact.

Priyanka walked the red carpet for the screening of Elton John biopic Rocketman (2019) and the actress went for an elegant look, mixing black and maroon. She wore a dazzling strapless gown which accentuated her figure.,

Priyanka’s outfit also boasted a thigh-high split, which gave her a more daring look. She completed her outfit with a pair of classy black high-heels.

Her hair grabbed everyone’s attention as it was styled in loose waves, which dropped down her shoulder and added a subtle lipstick to her look.

The actress contrasted her look for the evening when she attended the screening of documentary film 5B. 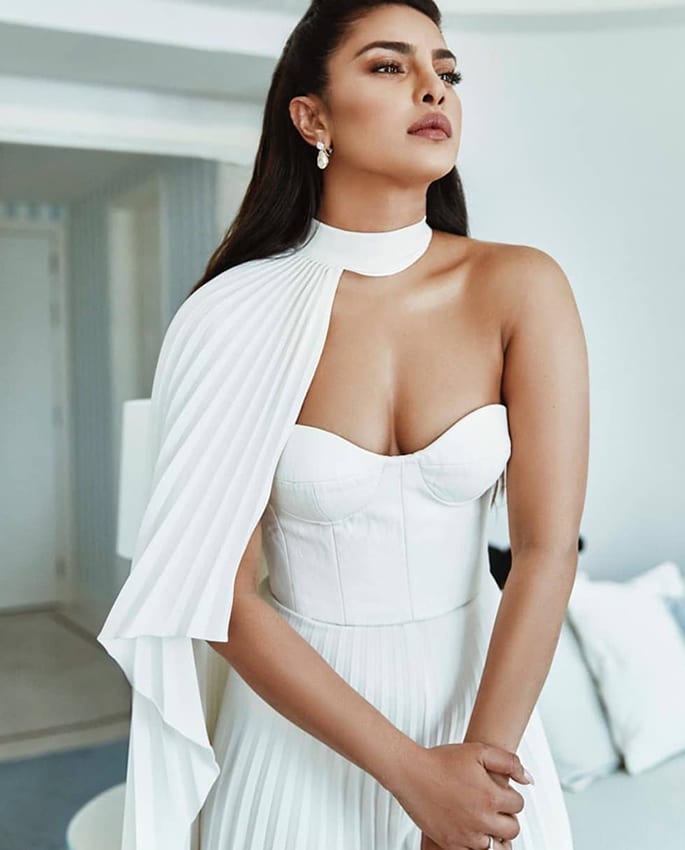 She was dressed in a white jumpsuit along with a cape, which made the outfit look more regal. She also styled her hair into a puff and let the rest of it open.

Priyanka also went for a nude makeup palette to complete her look. 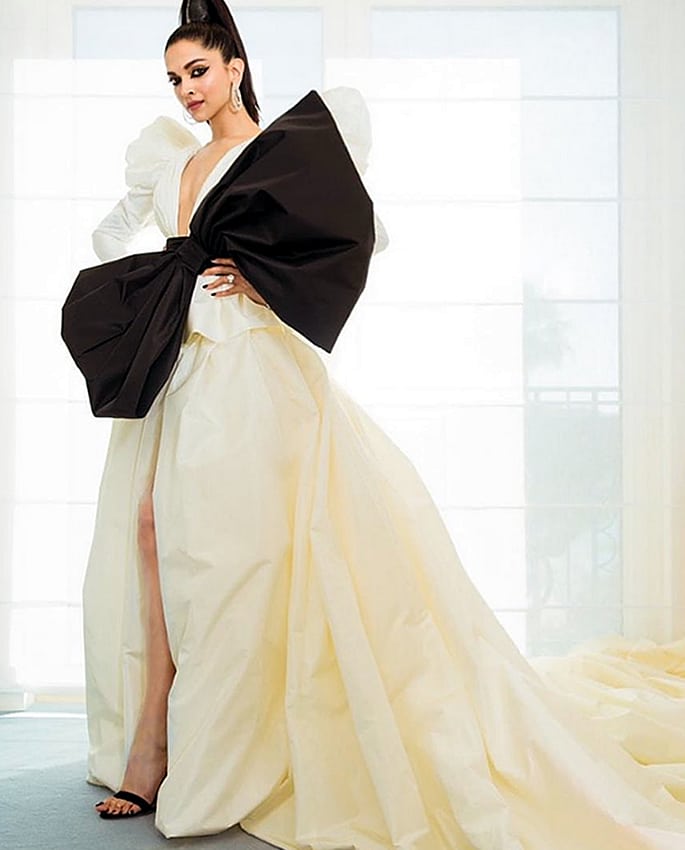 Deepika Padukone is one to turn heads with her outfits at major events and her look for the 2019 Cannes Film Festival is no exception.

The actress has gone for a monochromatic look by wearing a custom outfit by Peter Dundas in the combination of black and cream.

She put the look together with a high ponytail for an edgy addition to the dramatic outfit. 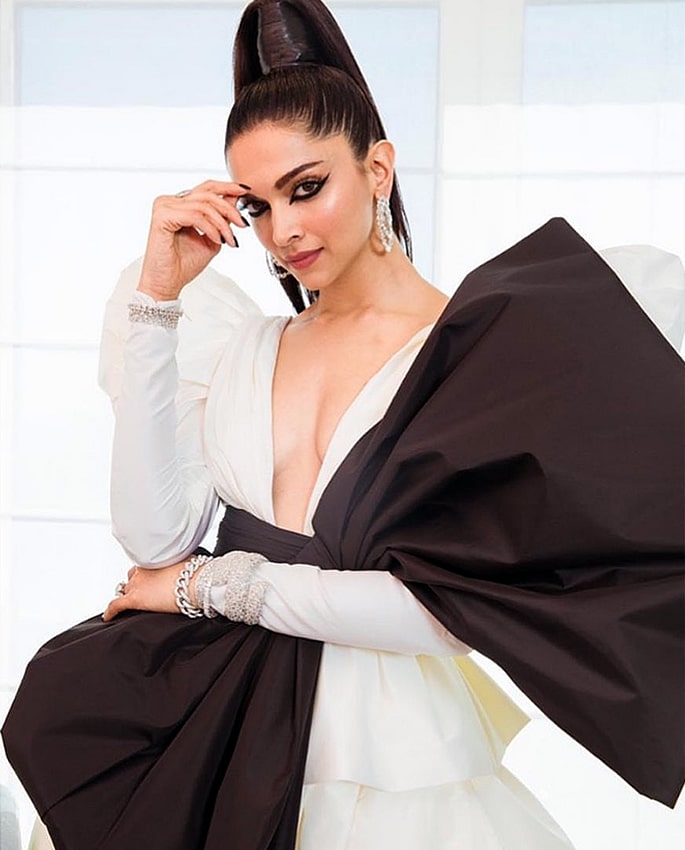 Her accessories include a pair of dangly earrings along with heels that fit perfectly with the trail. The outfit has a slit to go with the trail for added effect.

She completed her look with a bold eyeliner and subtle lipstick for a perfect contrast. 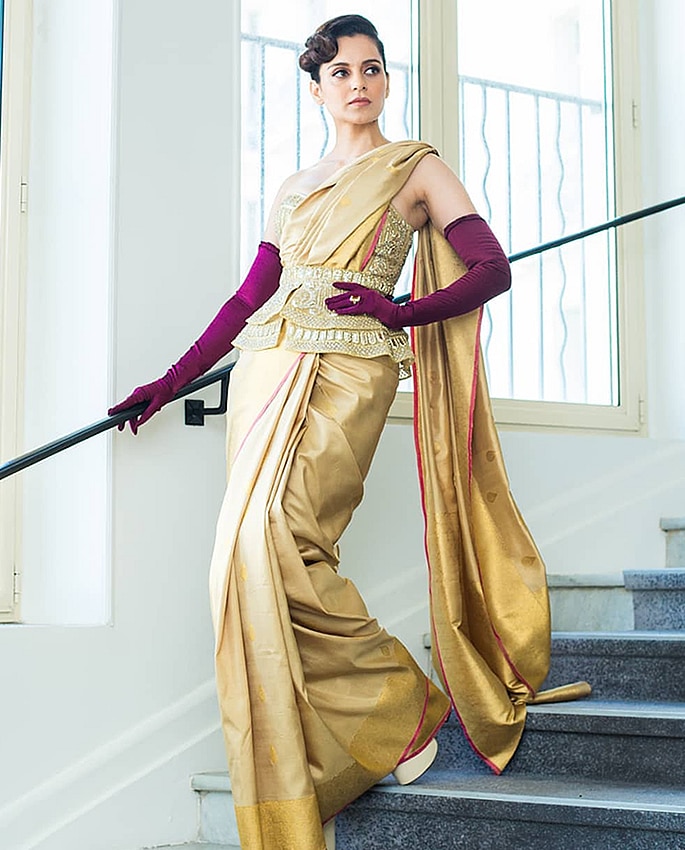 Kangana Ranaut is no stranger to a stunning look at red carpet events and her look at Cannes shows why.

The actress opted for a Desi look, which surprised everyone but they loved her classy and elegant outfit.

Kangana opted for a gorgeous golden saree by Bengaluru’s Madhurya Creations with a matching corset by Falguni and Shane Peacock.

Her hair was neatly styled into a bun and she completed her look by donning a pair of purple gloves. She looked more than ready to walk the red carpet.

For a party, she sported an edgy black pantsuit, which was adorned with intricate detailing, which compliments her white barely-there waistcoat. 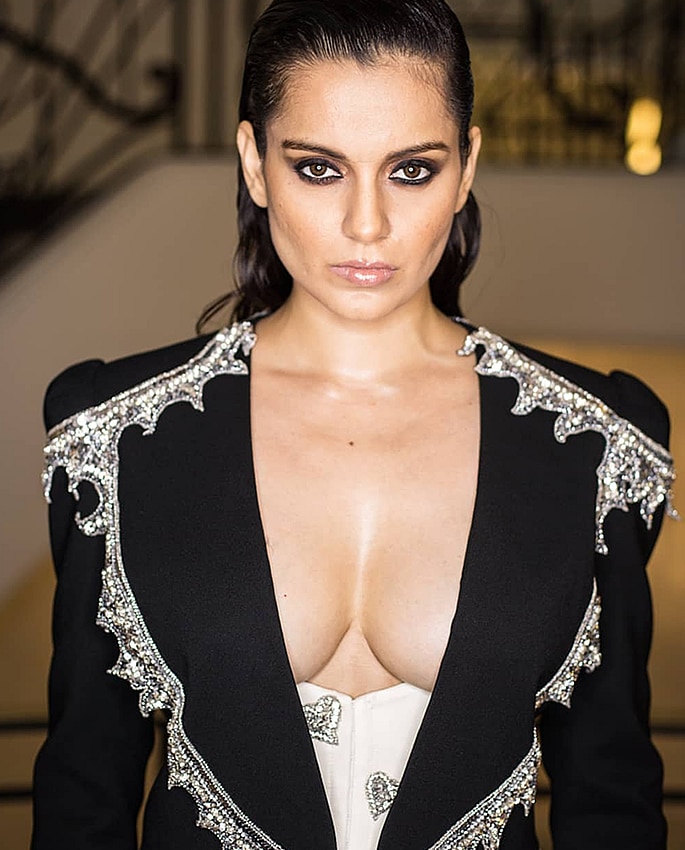 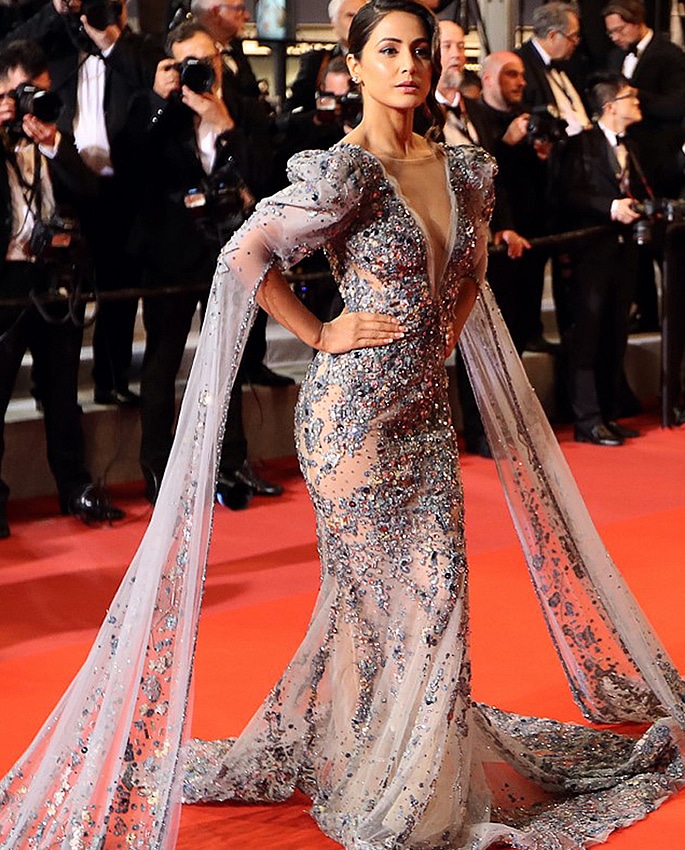 Hina Khan has made her debut at the Cannes Film Festival and it has been anticipated ever since she announced that she would be a part of the event.

The actress shared one look from a media day and she looked stunning but her red carpet look is a level above.

She made her debut during the screening of Bacurau and went for a shiny grey-silver gown. Both her gown and her sleeves drooped down to the ground which attracted the most attention. 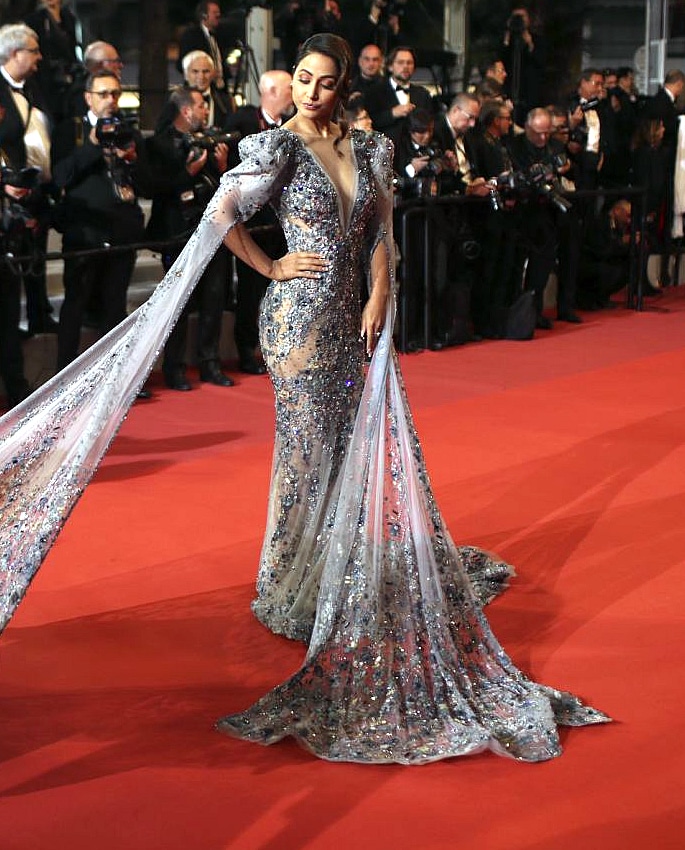 It was adorned with bling, which was certain to make her shine among the rest of the stars.

Her hair was also neatly styled but left some curls free for a sophisticated look.

Despite it being her event debut, Hina looked like a natural posing in front of the cameras.

The event does not end until May 25 and with Aishwarya Rai Bachchan and Sonam Kapoor attending at a later date, the 2019 Cannes Film Festival will only get bigger and better.

Dhiren is a journalism graduate with a passion for gaming, watching films and sports. He also enjoys cooking from time to time. His motto is to “Live life one day at a time.”
Hina Khan shares her Stylish Look at Cannes Festival 2019
Aishwarya Rai Bachchan dazzles in Gold at Cannes 2019