Best Dressed at the Oscars 2014

The biggest Hollywood event of the year, the Oscars, sees stars dress to impress. But who were the most fabulously clad on the red carpet for 2014? Check out DESIblitz’s list here.

The Oscar ceremony is Hollywood’s most glamorous night of the year and a key moment in defining the style icons of today.

However, not all stars have it always right. Who was the best and who was the worst on the 86th Academy Awards? Here is the ultimate DESIblitz verdict.

It was the triumphant night of Hollywood newcomer Lupita Nyong’o. She won the award for Best Supporting Actress together with our prize for Best Dressed actress at the Oscars. Her pale blue pleated Prada dress wins our ovation with its effortless and youthful vibe.

The soft and dreamy colour created a beautiful contrast with her skin. Her outfit was impeccably accessorised with a simple tiara and a set of unconventional golden Fred Leighton jewellery for an added personal touch. Her ring was a frog, and her bracelet was in the shape of a snake. The fashion verdict: she looks like a promising style icon.

After she awed the audience with her voluminous princess gown in 2013, this year Jennifer Lawrence opted for a more modern and sleek look to match her new short hairdo. The bold colour and the simple silhouette of her Christian Dior Haute Couture dress looked elegant and exceptionally flattering.

The Neil Lane jewellery and the Salvatore Ferragamo clutch perfectly complemented the outfit. However, critics denounced the young actress of playing it too safe and regularly picking up the same designer.

Kate Hudson was the night’s embodiment of old Hollywood glamour, as she appeared in a breathtaking Atelier Versace gown.

The shape accentuated her figure and the colour suited her skin tone. Her side-parted hair and beautiful waves were combined with natural face and a pink lip.

The Hollywood veteran victoriously left the 86th Academy Awards with a Best Actress award and a place in our Top 5 Best Dressed list. She looked divine in her embellished Armani Prive gown and extravagant Chopard jewellery. Her choice was safe, but nonetheless classy and exceptionally elegant.

Despite not being nominated, Penélope Cruz impressed the audience with her pale pink Giambattista Valli Haute Couture gown, adorned with a black accent on the waist.

She accessorised her outfit with Chopard jewellery and a simple black clutch. Her hair was tied up in a bun and her make up consisted of smoky eyes and a neutral lip.

Her flawless look inspired fashion critics to compare her to the timeless style icon, Grace Kelly.

Amy Adams did not appear on the Best Dressed list, because she played it too safe. Her Gucci gown was flattering, and her 40’s inspired hairstyle was sleek and classy, but her whole look was simple and underwhelming.

The categorical worst-dressed was Kristen Bell. The Roberto Cavalli dress did not flatter her figure and her low bun looked dull and uninspired.

Matthew McConaughey reinvented himself from the typical romantic comedy actor and body-building icon to a triumphant Academy Award winner. He managed to dress his new part impeccably.

The Best Actor winner looked classy in a simple yet fabulous Dolce and Gabbana tuxedo. His partner, Camila Alves, looked stunning in her sculptural pale pink gown and a same coloured clutch. They were unarguably the most stylish couple on the evening.

The other winner of the night, Jared Leto, became the bold trend-setter in male fashion. He combined classic black tuxedo pants with white shirt and coat and highlighted them with a bright red bow. The unconventional look was complemented by loose hair, beard and his buoyant attitude. 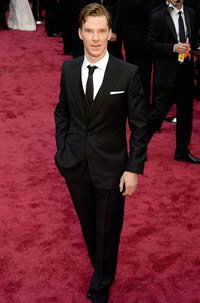 Although he did not win an award, Leonardo DiCaprio was dressed flawlessly. His simple black suit was enriched with navy blue lapels. The actor looked elegant and sophisticated.

Deviating from the major trend of bows, Benedict Cumberbatch looked impeccable in a suit with a classic black necktie. His sleek hair complemented his outfit. His look was safe, but elegant and classy.

The acknowledged director of 12 Years a Slave looked stylish in his dark tuxedo suit, complemented with a black bow. His set of black-framed glasses added a bit of a creative edge to his otherwise safe outfit.

Bradley Cooper looked elegant, but he was dressed too safely. However, he obviously had good time with his new girlfriend, the face of Burberry, Suki Waterhouse.

Pharrell Williams’s combination of classic suit and shorts did not fit in the glamour of the evening, which puts him directly into our worst-dressed list.

The 86th Academy Awards gave this year’s chance to the celebrities, consistent on the Best Dressed list, to flaunt their fabulous, but predictable style. Jennifer Lawrence did not surprise with her label’s choice and Cate Blanchett looked exceptionally elegant but safe.

However, the Oscars 2014 presented some gorgeous fashion dilettantes, including Lupita Nyong’o and Matthew McConaughey, whose style reputation is further to evolve. We are definitely going to keep our eye on them.

Dilyana is an aspiring journalist from Bulgaria, who's passionate about fashion, literature, art and travelling. She is quirky and imaginative. Her motto is 'Always do what you are afraid to do.' (Ralph Waldo Emerson)
Highlights of Fashion Pakistan Week 6
Lakmé Fashion Week Summer/Resort 2014