The 86th Academy Awards took place in Los Angeles. The Oscars celebrates the best of cinema from 2013. Winners included Matthew McConaughey, Jared Leto, Cate Blanchett and Lupita Nyong’o, but who took the Oscar for Best Picture?

"I think what we did is just tell it because it was a story that was never told."

Oscar night is always a starry night in Hollywood. The 86th Academy Awards saw acting and directing royalty arrive onto the red carpet, welcomed by swarms of media and press.

The grand finale of awards season, the Oscars are the crème de la crème of acting brilliance. This year was hosted by Ellen DeGeneres, who last hosted back in 2007.

True to her comic self, Ellen wasn’t afraid to poke fun at the strict decorum of the Academy Awards. She began the entertaining night by saying: “I hosted seven years ago, and I’m so honoured and flattered that they had me back so quickly.” 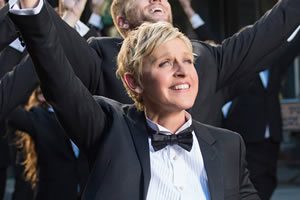 Later, as the ceremony dragged on, a hungry Ellen decided to order in pizza for the A-List guests, and handed out paper plates to Brad Pitt and Jennifer Lawrence.

She then took what has easily become the ‘celebrity selfie’ of all time, taken by Bradley Cooper, featuring Brad, Jennifer Lawrence, Angelina Jolie, Julia Roberts, Meryl Streep and Jared Leto.

The pic which was posted onto Twitter was retweeted 2 million times during the course of the show, and even caused Twitter servers to crash temporarily. It now holds the record as the biggest retweet in Twitter history.

Sadly, the Asian quota was lacking at this year’s event both in presence and nominations. Mallika Sherawat who has recently been signed to CBS’s Hawaii Five-O was unable to attend the ceremony due to her busy shooting schedule.

She tweeted out to her followers: “Aloha, missed the #Oscars due to ma shoot schedule but loving being in Hawaii:)”

Although a number of films from South Asia were submitted for Best Foreign Film, none of them made the shortlist. In particular, Pakistan’s Zinda Bhaag directed by Meenu Gaur and Farjad Nabi is the first Pakistani film to be selected in over 50 years, however it failed to make it to the nomination stage.

Indian Gujrati film, The Good Road, directed by Gyan Correa, and Bangladeshi film, Television directed by Mostofa Sarwar Farooki were also selected but were not nominated.

But where Asian’s were left behind, yet again the Oscars saw the incredible talents of British cinema, which has become both meaningful and cutting edge. George Clooney and Sandra Bullock’s Gravity won 7 Oscars in total, but the real winner of the night was Steve McQueen, who became the first black director to win the Best Picture Oscar for 12 Years A Slave. 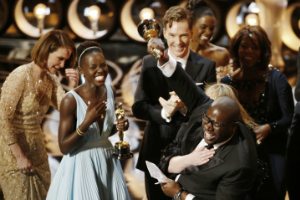 Speaking about the film on the red carpet, British actor Benedict Cumberbatch explained the importance of the film by saying: “It is something that is universal, in the sense that it is about a man and his love and his courage and grace to try and get home to his family.

“It’s not a history book story this, it’s something that needs to resonate beyond that. At the same time, it’s Solomon Northup. That’s his story.”

Director Steve McQueen added: “I think what we did is just tell it because it was a story that was never told. We wanted to look at it, we wanted to gaze at it and we wanted to tell that story and share it with the public.”

Gravity, the 3D science fiction film, took the Oscar for Best Directing for Alfonso Cuarón and Best Original Score for British composer, Steven Price. The film has also been applauded for its visual effects and cinematography, showing the future of Western cinema.

Here is the full list of winners for the 86th Academy Awards 2014:

The biggest Hollywood event of the year, once again the Oscars has acknowledged the increasingly global face of cinema. The 86th Academy Awards saw the best films of 2013 and honoured the rising stars of the future. Congratulations to all of the winners.

Aisha an English literature graduate, is a keen editorial writer. She adores reading, theatre, and anything arts related. She is a creative soul and is always reinventing herself. Her motto is: “Life is too short, so eat dessert first!”
Shaadi Ke Side Effects ~ Review
Superwoman Lilly Singh Goes to Bollywood