Aishwarya Rai Bachchan will set your hearts racing with this first look still from her upcoming film, Fanne Khan. The diva shines in a confident and stylish look. Check it out!

Her tresses look beautiful with a tinge of red.

Aishwarya Rai Bachchan’s first look from her upcoming film Fanne Khan has been released by the producers, Kriarj Entertainment on Twitter.

Aishwarya, 44 is looking better than ever, sporting a military jacket and shiny shades. Her tresses look beautiful with a tinge of red.

Sharing the picture on social media, the makers captioned it as:

“There are divas and then there is #AishwaryaRaiBachchan.. our shining star!”

The diva was last seen in Karan Johar’s Ae Dil Hai Mushkil where she essayed the role of a ‘shaira’ (poet) called Saba.

If you thought she looked stunning as Saba in the film, the actress’ fresh look in Fanne Khan will mesmerise you even more!

Her first look suggests a promising and a confident character.

Apparently, the film is adapted from a Dutch film, Everybody’s Famous where a father goes to the extremes of kidnapping a popular singer in order to claim fame for his singer daughter. 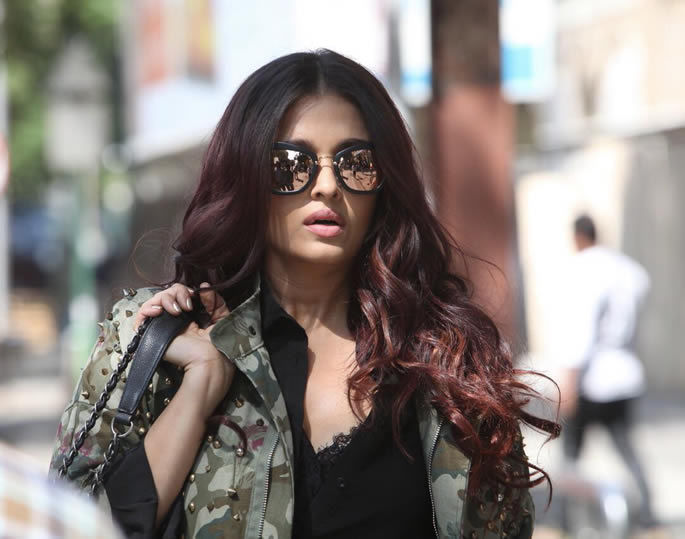 Fans are ecstatic to see their favourite Bollywood beauty return to mainstream Indian cinema. After giving birth to her daughter Aaradhya Bachchan in 2011, Ash took a break from films.

She finally made a comeback in Bollywood with Sanjay Gupta’s Jazbaa (2015) and was later seen in other films like Sarbjit (2016), and Ae Dil Hai Mushkil (2016).

Before beginning shooting for her upcoming film, Aishwarya gave a statement saying:

“I am looking forward to joining the team and enjoying the process of filmmaking. I would talk more about the film in the course of time.”

We are definitely eager to hear more about her character from the film after seeing this amazing first look.

The former Miss World is a global icon and was recently spotted in Sydney, at the inauguration of the Longines Watches store in the Queen Victoria Building.

The actress was present to cut the store-opening ribbon and to bear the Queen’s Commonwealth Games baton. She stunned everyone, sporting a black ensemble.

The actress was later spotted at a cafe in Sydney along with husband Abhishek Bachchan and daughter Aaradhya. Looks like the starry family enjoyed a mini vacay.

I love how this person describes Abhishek and Aishwarya as being ‘down to earth’ here. It just shows that their values go way beyond their celebrity status pic.twitter.com/3dk63z6Jge

Ash’s upcoming film, Fanne Khan is expected to be special since the film brings together Aishwarya alongside Anil Kapoor after a gap of 19 years.

The duo was last seen together in Subhash Ghai’s 1999 musical hit, Taal.

Buzz is that Aishwarya will be essaying the role of a famous singer. Also, Rajkummar Rao will have a key role in the film.

Directed by Atul Manjrekar, Fanne Khan is expected to release in June 2018.

Surabhi is a journalism graduate, currently pursuing an MA. She is passionate about films, poetry and music. She is fond of travelling places and meeting new people. Her motto is: "Love, laugh, live."
Sonakshi says Working with Salman again ‘Nostalgic & Exciting’
7 Bollywood Couples & their Love Stories we Adore