Sonakshi Sinha and Salman Khan reunite on screen in the upcoming film, Welcome To New York. The Dabangg couple are seen recreating some magic in a new romantic number.

"It was nostalgic in many ways. The romantic, melodious song has been filmed beautifully"

Sonakshi Sinha shares screen space with Salman Khan for the third time in her upcoming film Welcome To New York.

The duo features together in a romantic song ‘Nain Phisal Gaye’ which was shot in New York and recently released.

In the song, Sonakshi’s character, Jeenal Patel is starstruck and deeply in love with Salman Khan. Since she essays the role of a designer, she is seen taking Salman’s measurements while designing for him.

The actress who debuted in Bollywood with Khan has previously worked in two films, Dabangg and Dabangg 2 with him.

When asked about how the experience of working with the superstar again was, Sonakshi said:

“It was really exciting to be reuniting with Salman for our third film together after Dabangg and Dabangg 2. We shot the song entirely in New York.

“It was nostalgic in many ways. The romantic, melodious song has been filmed beautifully.” 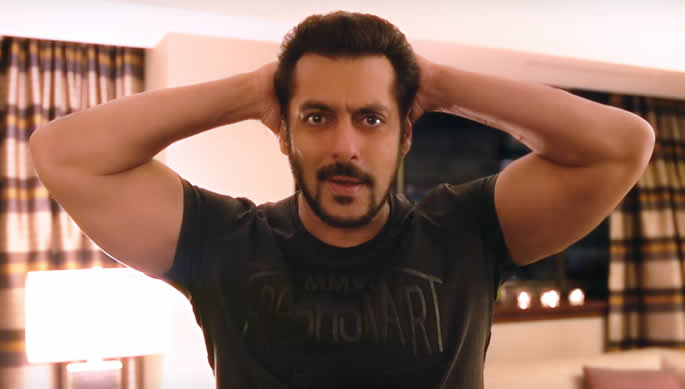 The romantic track has been composed by Sajid-Wajid.

A great chemistry can be seen between Sonakshi and Salman, just like their previous popular tracks such as ‘Dagabaaz Re’ and ‘Chori Kiya Re Jiya’ which were also composed by the duo.

There are also a few Dabangg references that fans can enjoy while watching the video. One fan on YouTube even commented: “Chulbul is Back!”

“Thanks @sonakshisinha always fun to compose for you u will always be our sweet mast mast mast Dabangg Girl.”

Salman is known to have been a protégé of many Bollywood actors and Sonakshi is one of them.

The actress recently appeared on Neha Dhupia’s chat show, Vogue BFFs along with designer Manish Malhotra and had some interesting things to say about the Bhai of Bollywood.

Sonakshi first referred to what she calls Salman’s “Galaxy School of Acting.”

According to the Noor star: “They are all the actors who have come out from the Galaxy apartments [Salman Khan’s home] because of being encouraged by Salman. Be it like Katrina Kaif, me or Aayush Sharma now.”

Not many know that Sonakshi initially started off her career as a fashion designer and it was Salman who encouraged her into acting.

She told Neha: “There’s some kind of radar that he has. He sees something in you and he makes you go for it.”

“Salman told me that you are wasting your time on fashion designing. Stop studying. Lose weight. Become an actress. I am grateful to him.”

With numerous hits now in her filmography, we can understand why.

Sonakshi’s upcoming film is Welcome To New York, a comedy revolving around two distinct characters who meet by sheer chance on an unexpected trip to New York. Sonakshi stars alongside Diljit Dosanjh.

Set in the backdrop of Bollywood, the film has extended cameos by celebrities such as Karan Johar, Boman Irani, Riteish Deshmukh, Lara Dutta, Rana Daggubati, and Sushant Singh Rajput.

Directed by Chakri Toleti, the film is slated to release on 23rd February 2018.

Surabhi is a journalism graduate, currently pursuing an MA. She is passionate about films, poetry and music. She is fond of travelling places and meeting new people. Her motto is: "Love, laugh, live."
‘Malaika’ of the South: Heena Panchal loves Valentine’s Day
Aishwarya Rai Bachchan’s Fanne Khan First Look is Gorgeous!