Delhi That Was: A Rare & Nostalgic Exhibition

‘Delhi That Was’ is an exhibition that reflects a nostalgic side of the capital. The exhibition follows the work of three eminent people over a few decades.

"these images were cutting-edge when they were shot."

The timeless exhibition, Delhi That Was provides an uncommon insight into the capital of India.

Pictures from three legendary archives, following the works of renowned architect Habib Rahman, along with famous photographers Raghu Rai and Madan Mahatta shape up this exhibition.

Many stories from the 1950s and onwards transpire from the presentation, which is taking place at the Ojas Art Gallery, Delhi.

As part of the display, most of the older photos are black and white, with some colour pictures also emerging.

The engaging photos capture the dreams and fears of this eternally mysterious city. Anubhav Nath from Ort who has produced the exhibition told First Post:

“I have had a long association with Delhi myself and have witnessed it undergo significant change. But many things have stayed the same.”

Let’s look at some of the photos from the exhibition, offering a rare look of Delhi: 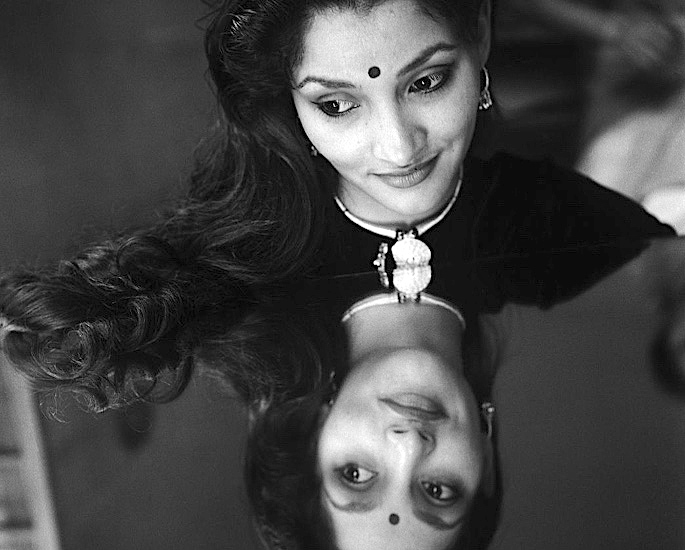 This is a beautiful black and white photo of Indian classical dancer Indrani Rahman from 1953.

After becoming the first Miss India, she went onto participate in the 1952 Miss Universe competition that took place in Long Beach, California, USA.

The picture shows a reflective shot of Indrani taken by her husband, the Kolkata-born Habib.

Habib got to capture his stunning wife, following the couple’s move to Delhi.

Indrani is wearing a bindi on her forehead and a necklace around her neck. Her open hair adds more attraction to this image. 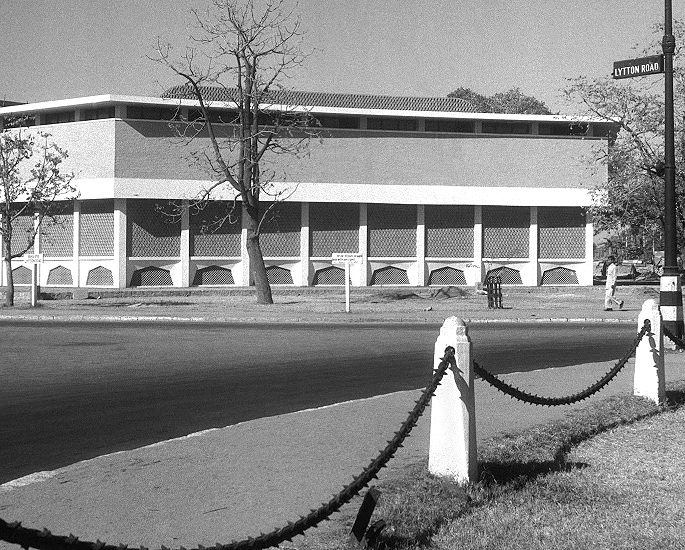 Well, known architect, Habib Rahman put emphasis on institutions, such as the Rabindra Bhavan and its interior.

This photo from 1961 was designed to show Ravindra Bhavan from the roundabout. The picture shows some simple trees and a sign directing to Lytton Road.

Photographer Ram Rahman, son of Habib and Indrani manages his father’s archives. He spoke to Indian Express about how things are different to when this picture was taken:

“All that we get to see is the wall of trees now and we can no longer see the building from the road.”

Ram continues talking about the interior:

“All proportions that were carefully designed were messed up. The light coloured cement flooring was ripped apart and replaced with cheap wooden flooring.

“The skylights have been blocked for no reason and it spoilt the whole sense of light. Natural light used to fall on the central staircase but now it is a dark and gloomy place.” 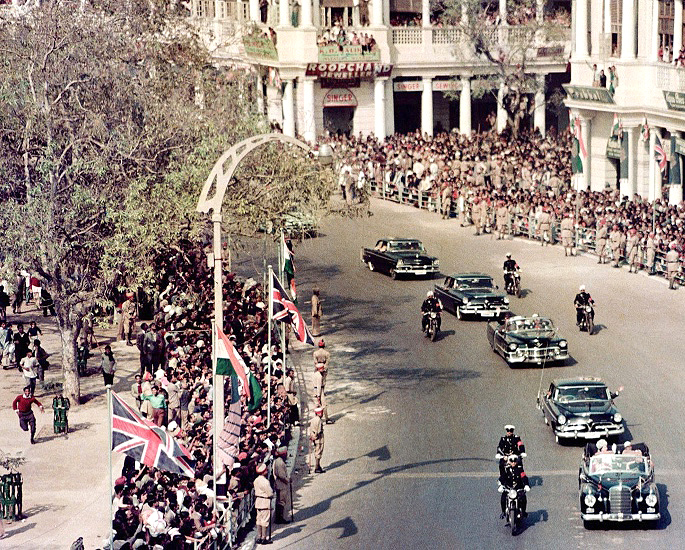 The Queen is visibly waving from her car to the people that have come out and are watching from the roads, terraces and roof of Connaught Place, a popular serpentine lane.

On the left-hand side of the image, a young lad in a red jumper appears to be running around a bend quickly. He certainly wants to catch a sight of the royal entourage.

Besides the British and India flag, a signboard of the famous Roopchand Jewellers can also be clearly seen. 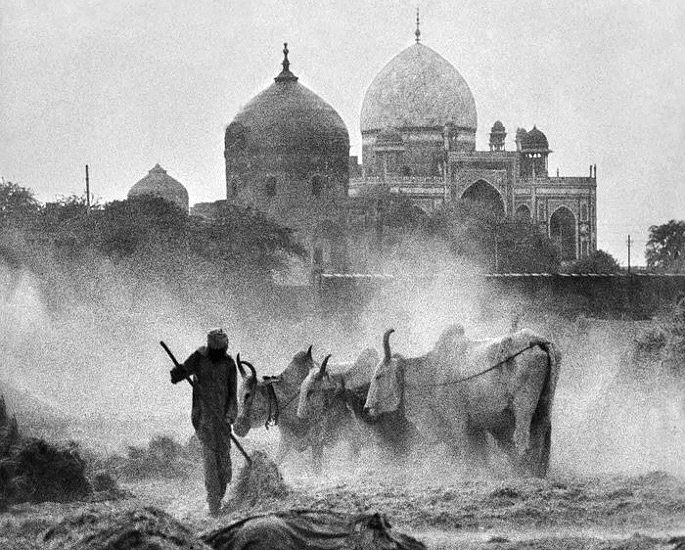 This photo by Raghu Rai in 1966 is very sentimental, reflecting a blast from the past.

The historical lens of Rai shows an agriculturalist and bullocks cultivating a wheat field, with the Tomb of Mughal Emperor Humayun in the backdrop.

The Tomb attracts more attention in comparison to the extremely high erections that represent the growth of Delhi. 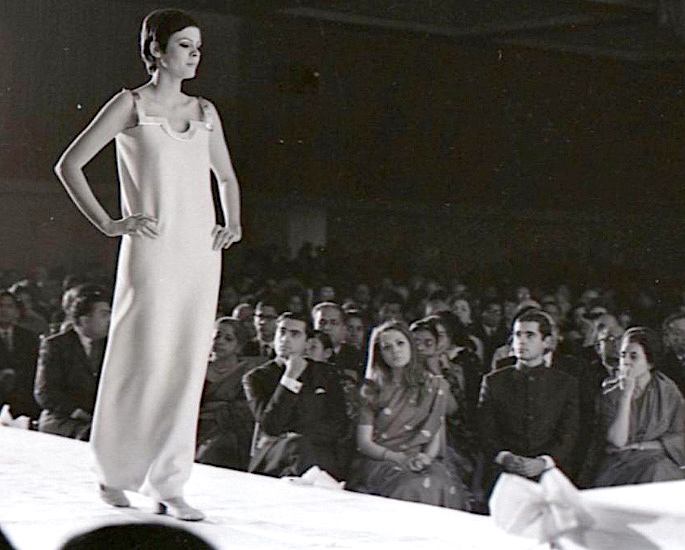 Madan Mahatta who left this world in 2014 seized a stand out moment in 1967. He took a photograph of the Gandhi family at a Pierre Cardin ramp show in Ashok Hotel.

Sitting in the front row of the fashion show is present Congress leader, then Sonia Maino with fiancé Rajiv Gandhi and brother Sanjay.

In the picture, her future mother-in-law, Indira Gandhi, Prime Minister of India is also in shot.

The photo is unique because you rarely see politicians at fashion shows. In modern times, mostly normal people and the Bollywood film fraternity are in attendance.

“When was expthe last time you saw a PM in a front row of a fashion show?”

“Fashion shows in Delhi are de-rigueur now. But can you imagine a Prime Minister’s family occupying the front row?

“It shows that Delhi was cosmopolitan and urbane even in the sixties.” 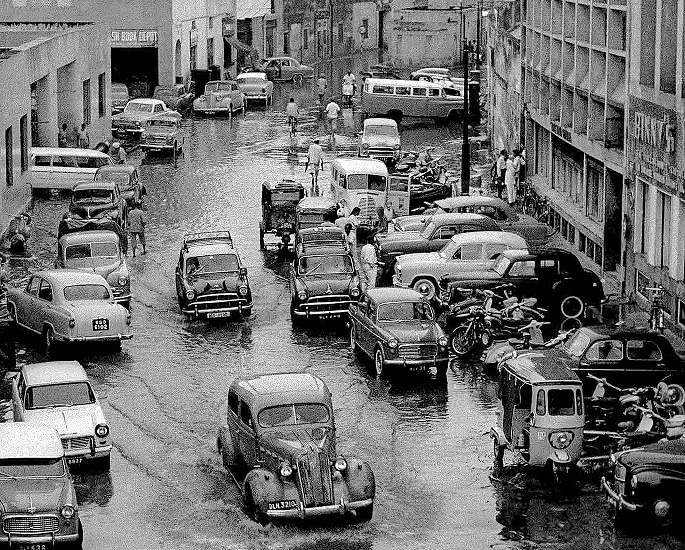 The 1970 photo shows several cars, including a Chevrolet, Fiat, Padmini and Ambassador. Some people may have forgotten these vintage cars in contemporary times.

Describing it as a favourite photograph of his, curator Nath, states:

“One of my favourite photographs, for example, from the Mahatta archive, is of a flooded Connaught place from 1970.

“Incredibly, those same lanes get flooded to this day during the rains. So I guess it is what you make of it.” 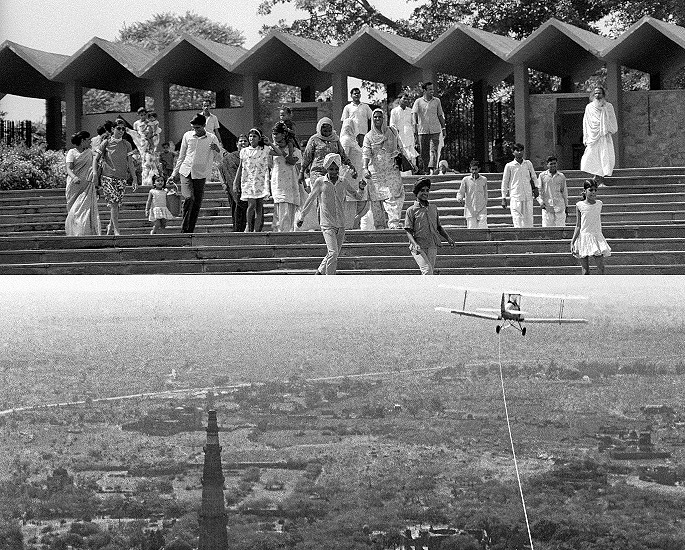 There are many other wonderful pictures as part of this exhibition. One is a black and white photograph by Mahatta outside the entrance of Delhi Zoo.

Designed by Habib the picture shows young men with turbans and women in western and eastern clothing walking down some steps.

Other photos draw to ordinary people, politicians and monuments.

Arjun Mahatta, the grandson of the celebrated photographer Madan Mahatta tells India Today that they have more than 2,00,000 photos of Delhi in their family archives.  He adds:

“The city has urbanised beyond recognition. But these images were cutting-edge when they were shot.

“For instance, you have drone photography now, but the aerial shots of the Qutub Minar and Safdarjung Tomb shot from an airplane that was towed by the glider was unheard of in the 1970s.”

Looking back to his masterful photography and how present Delhi is different, Raghu Rai said:

“Today, when I look back at some of the pictures that I took 30-40 years ago, what emerges is a Delhi that doesn’t exist anymore, or has changed so drastically these images stand a testimony of photo-history that cannot be rewritten.”

Talking to Indian Express, Nath hopes that attendees will take something positive from the exhibition:

“The hope is to make people experience and view a Delhi that was, which is so romanticised and get a glimpse of how things were.”

This fantastic exhibition ,which began on October 4, runs until November 12, 2019, from 11 am to 7 pm at the Ojas Art Gallery, 1AQ, near Qutab Minar, Mehrauli, Delhi, India.

For further information about the Ojas Art Gallery, particularly the artists and exhibitions, please check here.