Sonakshi Sinha has chimed in on the debate of the big age gap between lead actors and heroines. This happens to be the case with Salman Khan in Dabangg 3.

"I would feel odd romancing a guy who’s 22 years old."

Currently, promotions for Dabangg 3 (2019) are underway. Lead actor Salman Khan will once again star as Chulbul Pandey. His leading lady, Sonakshi will also be seen reprising her role.

Yet, for the third instalment of the Dabangg franchise, 53-year-old Salman will be seen romancing 21-year-old Saiee Manjrekar.

Saiee Manjrekar is the daughter of actor Mahesh Manjrekar and will be making her Bollywood debut with Dabangg 3.

Ever since the release of the trailer in November 2019, many on social media have joined the debate of older male actors courting younger actresses.

In this instance, there is a staggering thirty-three year age gap between the two stars.

In an interview with The Quint, Sonakshi Sinha shared her views on this conflicting debate.

While the idea of Madhuri Dixit romancing Ishaan Khatter is another way of looking at it. Sonakshi was asked what she thought about this. She replied:

“Oh wow. If you put it that way, but would you want to see Madhuri Dixit romancing Ishaan Khatter? That’s a bit … I don’t know. That’s a bit odd.”

Sonakshi was then asked if it is considered odd for an older actress to court a young actor, yet why is it not odd when Salman does it. She said:

“I don’t know actually. I have not thought of it that way. You should ask him only you know.

“What is he eating or what is he doing to keep looking so young and keep romancing the younger girls in every film?” 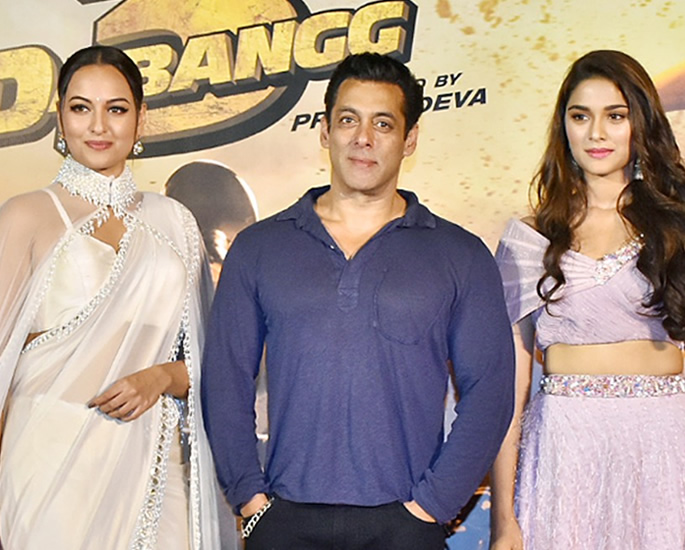 Sonakshi Sinha went on to mention how it is something she has never given much thought to. She explained:

“No, I actually haven’t because for me it’s a job right? And hats off to him for having sustained a career for so long in the industry and you know still working with as much gusto as he did initially.

“And I think it’s great to have achieved something like that. So if you have a problem with it you should go and ask him.”

Sonakshi continued to state how she personally would not feel comfortable romancing a much younger actor. She mentioned:

“Honestly if I was at an age of 50 I would feel odd romancing a guy who’s 22 years old. So that’s a personal opinion.”

Sonakshi Sinha went on to recall a film where an older actress was seen romancing a younger lead. However, it failed to do well. She stated:

“So yeah, I don’t know. I mean it’s possible. But it has happened, there has been a film where there was somebody.

“But also then it wasn’t accepted. I don’t think that film did well at all which is the audience’s prerogative, right?

Asked whether this ideology is sexist, Sonakshi simply replied, saying:

“That just shows what kind of country we live in.”

This on-going debate of why is it wrong for older actresses to romance younger actors on-screen, while is it acceptable for older actors to do is prevalent.

Despite this, audiences continue to flock to the cinema to watch such films. This idea has been normalised by vast audiences regardless of this debate.

Ayesha is an English graduate with an aesthetic eye. Her fascination lies in sports, fashion and beauty. Also, she does not shy away from controversial subjects. Her motto is: “no two days are the same, that is what makes life worth living.”
15 Best Indian Punjabi Movies to Watch in 2020
Indian Filmmaker says make ‘Rape without Violence’ Legal