"there was one person who seemed unwell"

Healthcare officials were seen at Karan Johar’s home sanitising the property after it was discovered that guests who attended a dinner party contracted Covid-19.

The revelation comes shortly after Kareena Kapoor, who also attended the dinner party, announced she had tested positive.

As a result, healthcare officials visited her home to sanitise the place and to test other members of her family.

It has been reported that she has been following all the necessary precautions issued by the Brihanmumbai Municipal Corporation (BMC).

Amrita Arora stated that she contracted the virus while the positive tests of Seema Khan and Maheep Kapoor have also come to light.

The three women had also been at Karan Johar’s house for the gathering on December 8, 2021.

Kareena had been criticised for allegedly breaking Covid-19 rules, a statement issued on behalf of the actress was released. 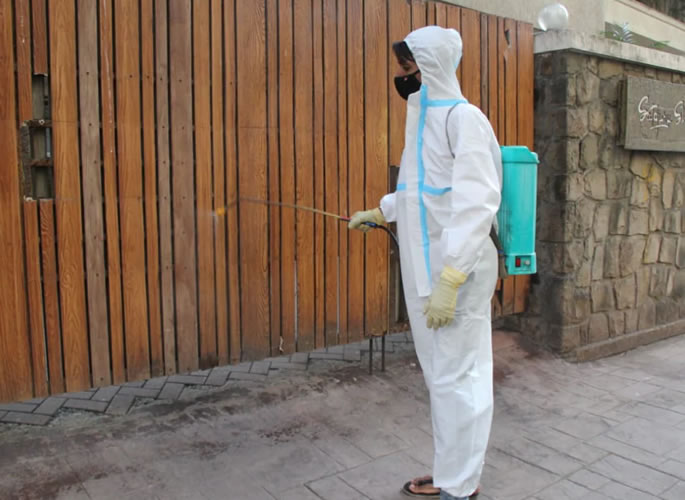 It clarified that Kareena had caught Covid-19 at an “intimate” gathering where another guest “seemed unwell and was coughing”.

The statement read: “Kareena has been extremely responsible throughout the lockdown period.

“She has been careful every time she’s stepped out. Unfortunately, this time she and Amrita Arora contracted Covid at an intimate dinner where a few friends had gathered to catch up.

“It wasn’t a big party as being reported. Among that group, there was one person who seemed unwell and was coughing, and who eventually passed it on.

“This person should have been responsible enough to not attend the dinner and put others at risk.

“As soon as she tested positive she has quarantined herself and is following the necessary precautions and protocols to deal with the condition.

“It is not fair to put the blame on her and say that she has been irresponsible and let her guard down.

“Kareena is a responsible citizen and also has the concern and care for safeguarding her family.”

While unconfirmed, it has been reported that Seema Khan is the guest who was coughing at the dinner.

According to the BMC, Seema was the guest to have tested positive.

All four women have had both vaccinations.

On the night of the dinner party, Alia Bhatt, Kareena, her sister Karisma, Malaika Arora, her sister Amrita, Seema Khan and Maheep Kapoor were pictured outside Karan Johar’s house.

The group were also seen at Rhea Kapoor’s home that same week.

Other guests who had attended Karan’s event have been tested for Covid-19 and are awaiting the results.

Dhiren is a journalism graduate with a passion for gaming, watching films and sports. He also enjoys cooking from time to time. His motto is to “Live life one day at a time.”
Shannon Singh boasts about her 9 Holidays during Pandemic
Ranvir Singh confirms Relationship with 26-year-old Toyboy