The Duke and Duchess of Cambridge, Kate Middleton and Prince William welcomed a baby boy on July 22, 2013. The Royal baby will be the third in line to the British throne.

"Well, he's got a good pair of lungs on him that's for sure!"

It’s official! Kate Middleton has finally given birth to a Royal baby boy on July 22, 2013. The birth took place at 4.24 pm at the Lindo Wing, in St. Mary’s Hospital, Paddington, London, and has instantly captured the hearts of almost everyone across the globe.

Kate went into labour earlier that morning and was escorted to the hospital with her husband, Prince William in tow. After 1o and a half hours, the new HRH Prince of Cambridge was finally delivered via a natural birth. Prince William, later released a statement saying: “We couldn’t be happier.”

Following centuries of British tradition, the announcement of the birth was made through a notice that was placed on an easel on the forecourt of Buckingham Palace at 8.30 pm (1 am India time). Signed by the Queen’s gynecologist Marcus Setchell, and the medical team that attended to Kate, it read: 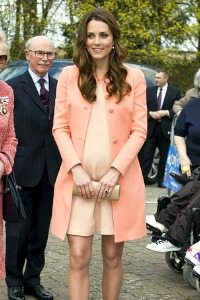 The easel was the same as the one used for when Prince William was born on June 21, 1982. The announcement was also sent out in an email and a Town Squire announced the news to growing crowds outside St Mary’s Hospital in Paddington.

“The Queen, the Duke of Edinburgh, the Prince of Wales, the Duchess of Cornwall, Prince Harry and members of both families have been informed and are delighted with the news. Her royal highness and her child…will remain in hospital overnight.”

Weighing in at 8lbs 6oz, the Royal Prince will be the third in line to the British throne which currently rules over 16 commonwealth countries.

Kate has swiftly become one of Britain’s most loved national treasures since she became the Duchess of Cambridge following her marriage to Prince William.

Her effortlessly chic style and beauty has given the British Royal family that much needed cool factor, which for years had been considered by many to be outdated. Along with William and Harry, she now represents the new age of monarchy that no longer keeps the stereotypical “stiff upper lip” that their predecessors do.

Actively integrating with the public, and with William and Harry both working in the armed forces and leading relatively normal lives outside the lavish traditions of Windsor and the Buckingham Palace, they have jointly transformed the face of British royalty across the globe.

Now entering parenthood, the couple are ecstatic, emotional and determined to be the best parents to the newly born prince. Prior to leaving the Lindo Wing of the hospital the couple presented themselves with their new bundle of joy to the world. 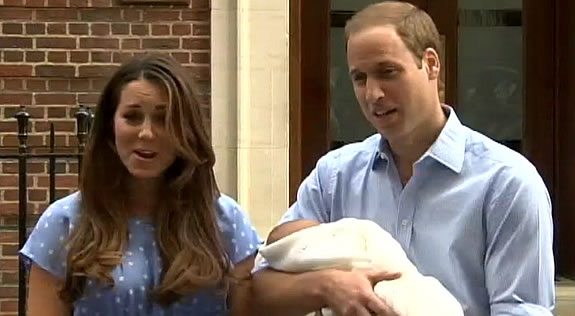 Holding his new born son Prince William said: “He’s got a good pair of lungs on him and he is a heavy baby!”

William added that he had Kate’s looks and that he had already changed the first nappy himself, showing hes an actively involved father already! History was made seeing a father holding a future king in his arms in front of the public in this way.

New Grandfather Prince Charles was ecstatic at the news of the birth: “Both my wife and I are overjoyed at the arrival of my first grandchild. It is an incredibly special moment for William and Catherine and we are so thrilled for them on the birth of their baby boy.”

“Grandparenthood is a unique moment in anyone’s life, as countless kind people have told me in recent months, so I am enormously proud and happy to be a grandfather for the first time and we are eagerly looking forward to seeing the baby in the near future.”

Reactions and congratulations have been flooding in from around the world for the happy Royal couple, where anticipation for the little arrival had been bubbling ever since Kate went into labour. 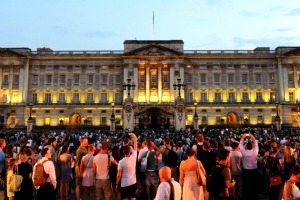 MP Seema Malhotra added: “Congratulations to William and Catherine on the birth of their baby boy. Hope they get some well deserved privacy too in the coming weeks.”

News in India has also been building. One member of the All India Anglo Indian Association’s Patna branch said: “We are planning a dinner and dance to celebrate.”

Sudasan Pattnaik, who is a renowned sand artist, is planning to carve out a baby boy with a crown and the text Welcome Baby Cambridge.

Leading Congress party member Rashid Alvi said: “I congratulate the Queen and her entire family. A baby boy, it is, yes? That is fantastic news. The rightful heir to the throne. He has a very bright future ahead.” 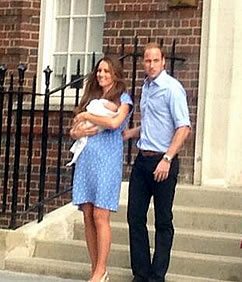 Numerologist to B-town stars, Swetta Jumaani said of the new born: “He is going to be very strong-headed. He will [also] be very artistic. He can be very good in drawing, painting, music singing.”

Of course, with Prince William’s new-found Desi roots revealed, we’ll be expecting a few traditional Desi celebrations over the next few days.

If they wish to go down the Indian route, Kate is surely in for a treat as new mothers are traditionally given gifts to ‘fill the lap’. Known as Godh bharai in Northern India, the mother receives money, sarees and jewellry from close relatives.

In other parts of India, Valakappu is another celebration that offers bracelets and bangles to the new mother, and she is dressed up in fine clothes. In Maharastra, the Dohal Jevan ceremony which is to help satisfy the pregnant woman’s food cravings. She is dressed in green clothes and adorned with flowers and ladies sing soothingly to her. 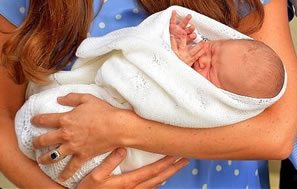 Nowadays, many British Asians opt for the Western baby-shower celebration with some of the traditional ethnic customs included. These are full of dancing, singing folk songs and adorning the mother with mehndi and bangles.

In true Punjabi style, the Lohri festival celebrates the arrival of a new born with a huge feast and exchange of gifts. Traditionally, Lohri ends with singing and dancing over a bonfire. Both mother and child are completely pampered. Other children usually go from door to door for Lohri Prasad or offerings.

However they wish to celebrate, the new Royal baby is no doubt the most famous little tot in the world right now. DESIblitz sends our congratulations to the happy Royals and welcome into the world a new little Prince.