Indian cinema legend Dilip Kumar was a super sports player. Find out more about the games he played and the athletes he met and encouraged.

"Dilip Kumar is and will always remain my sporting hero."

Superstar of Indian cinema, Dilip Kumar, was a fantastic sportsman, playing a variety of games.

Dilip Sahab had numerous memorable sporting moments in almost every setting. This includes on the field, during shooting, by the sea, and on-screen.

As a keen sports observant, he also had many words of encouragement, influencing professional sportspeople.

Known as Mohammad Yusuf Khan, the Peshawar-born actor had the sports genes inside him from a young age.

After establishing himself as an actor, he was also the star attraction when donning the white clothing for cricket. 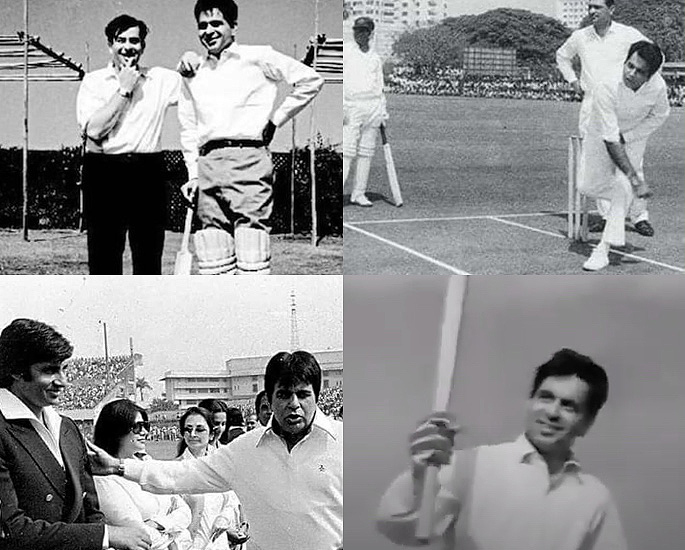 However, Ayaz mentions that the star was also a keen enthusiast of a former colonial sport, with an excellent guard:

“#Dilip Kumar lived football most but followed cricket intently too, and played whenever possible.

“Side on stance and bat grip suggest he knew how to bat!”

We zoom into the sport’s history and pictorials of Dilip Kumar, including a special video.

We also present an exclusive reaction from a former Indian kabaddi player who was inspired by the heroics of Dilip Kumar. 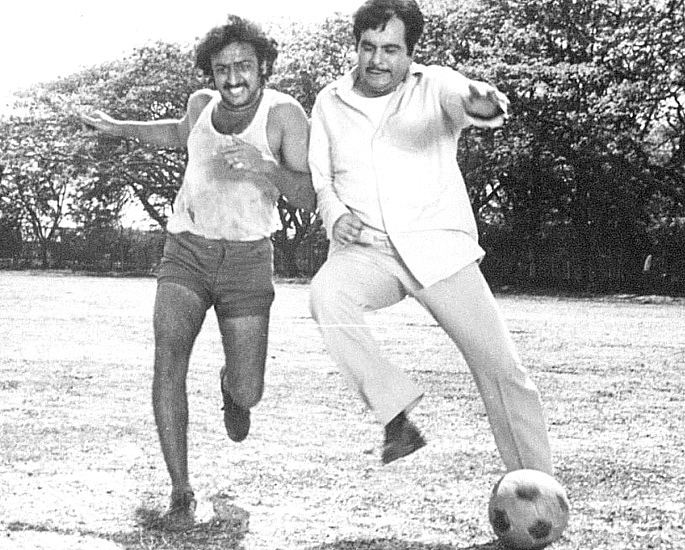 Dilip Kumar had a keen interest in football. He was playing the sport quite frequently as a student at college.

According to Dilip Kumar The Substance and the Shadow: An Autobiography (2014), Sahab would play the sport on the grounds near Metro Cinema.

As per his autobiography, during the production of Naya Daur (1957), he was playing football in an open ground within a large government building.

His co-stars from the film. Ajit, Jeevan, and Johnny Walker would play with him.

Dilip Sahab played football for a key scene in the film Mashaal (1984) also.

The scene shows him demonstrating his ability to dribble past many on-screen players including Gulshan Grover.

He eventually scores past goalkeeper Anil Kapoor, He kicks the ball mid-height to the left-hand corner.

The players are unsuccessful in stopping him from scoring a goal.

Gulshan spoke to the Times of India about this specific scene, Dilip Kumar’s skillful play, and footballing past:

“It was a scene where he tells us to try and stop him from scoring a goal. The manner in which Dilip Saab played football in the scene, we were all amused.

“He gave exactly what the scene demanded. He played so well we all looked like midgets in front of him.

“Dilip Saab also told us that he used to play a lot of football during his younger days.”

It was quite evident that he was a master tactician of the game and had a good understanding of football nuances.

He had aspirations to play professional football, but his father felt he should be a chess player.

He talks about wanting to have a football career in his autobiography, stating:

“It was soccer that I loved and wanted to play seriously and professionally.”

Whilst the father-son were at loggerheads, his fate was in neither sport. 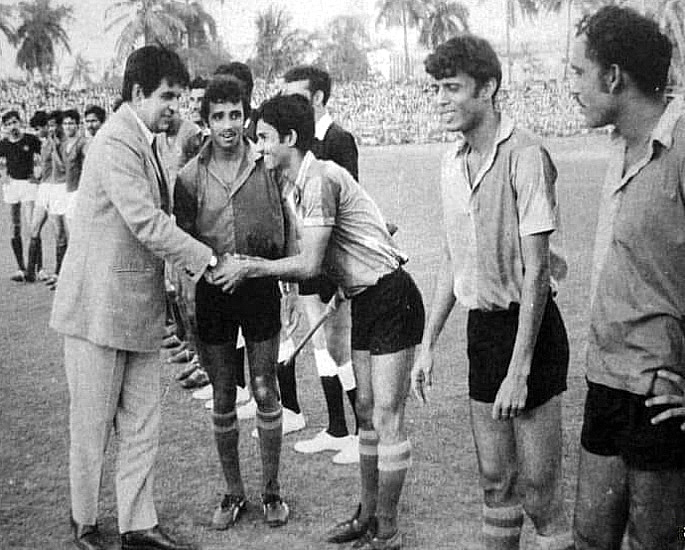 In a meet up with the defender at a studio, he also introduced Subrata to his director with the utmost respect:

The Doyen of Bollywood attended Rover Cup matches at the Cooperage Stadium and the 1978-79 Santosh Trophy final in Kashmir.

Footballer Victor Amol Raj said the iconic figure was very encouraging to players like him, especially after scoring a goal.

He was delighted to receive a compliment from someone that he always looked up to:

“’Shabaash. Bahut Achcha Goal Kiya. I was thrilled to hear these words from my idol.”

Dilip Sahab was also continuously playing football until the age of fifty-seven. 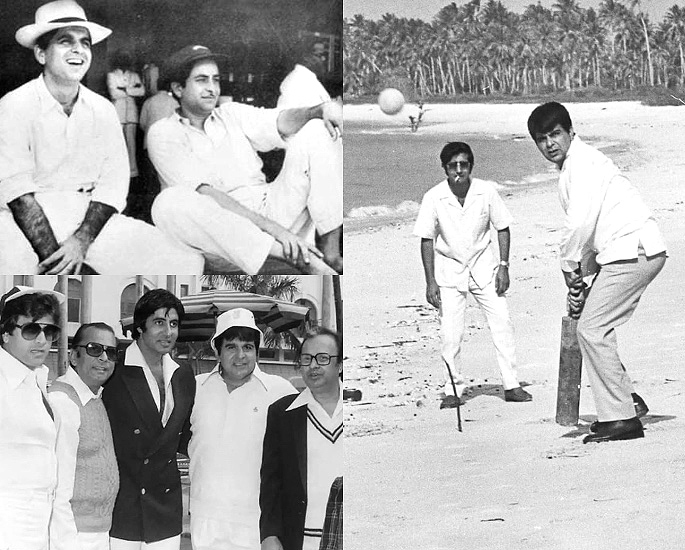 Dilip Kumar was a big admirer of cricket, despite football being his first love.

As per his autobiography, he bought his first cricket bat from a shop close to Metro Cinema.

Whenever he used to have free time and in between shootings, he used to play cricket with his co-artistes.

Dilip Sahab and Raj Kapoor in particular were often playing the gentleman’s game together.

In fact, he was the captain of the all-stars team versus a Raj Kapoor side full of celebrities.

The match had taken place at Mumbai’s Shivaji Park in January 1962. It was a charity game, raising money for the Cine Workers Relief Fund.

Despite it being just a friendly match, Dilip Saab was really focused.

His efforts paid dividends, as he successfully skippered his side to triumph.

On February 11, 1979, he also led a team of film stars for a charity cricket match that took place at Eden Gardens, Kolkata.

The icon’s participation in this match was to support the West Bengal Chief Minister’s Flood Relief Fund.

Dilip Sahab and the other actors had shown compassion for the victims of the 1978 West Bengal floods.

He made a fantastic half-century (54) in this match, as his team was victorious. Famous Bengali actor Uttam Kumar was the losing captain on this occasion. 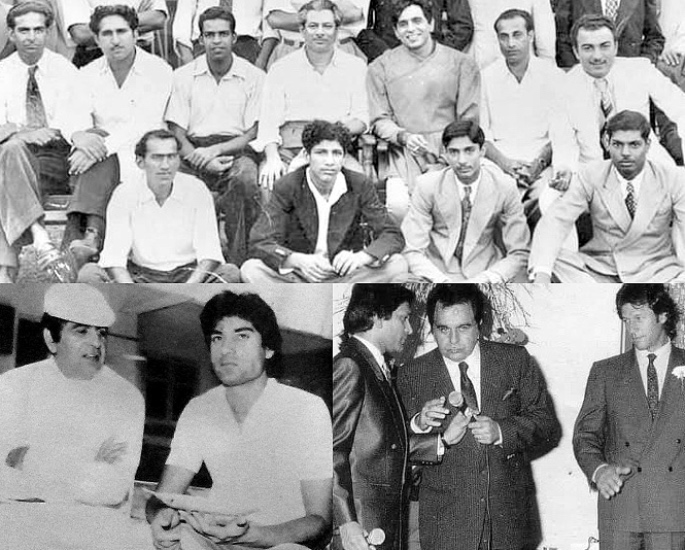 During his life, Dilip Kumar was also a big fan of Pakistani cricketers. In 1951, he had a rendezvous with the historic Pakistan squad on their first tour of India.

He also shared the stage with Imran Khan in Pakistan, glorifying the former Pakistan captain with so many beautiful words.

Dilip Sahab never let an opportunity go by to play cricket, including taking the field on a beach.

Going by some images, he had a lot of determination when batting and had a good bowling follow through.

Besides Raj Ji, some of his other cricket partners include Pran, Mukhri, and Nanda. 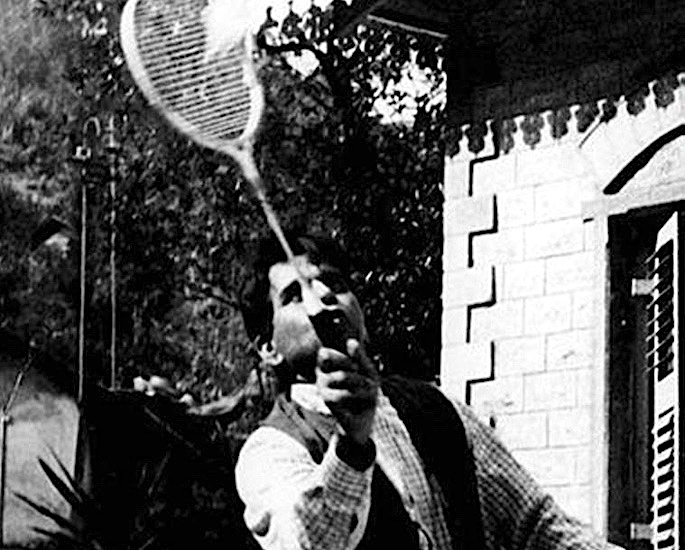 Dilip Kumar was a passionate badminton player. He was often shuttling at a club and when having free time between shooting.

He would play badminton at Bandra Gymkhana with Mohammad Rafi, Naushad, and Anand Bakshi.

His autobiography mentions, him and Raj Kapoor going to the house of Ashok Kumar for a game of badminton.

In his personal memoir, Dilip Sahab also remembers playing badminton during the outdoor shoot of Paigham (1959) with Vyjantimala.

“Whenever we shot outdoors, she joined me and other members of the unit for a game of badminton…” 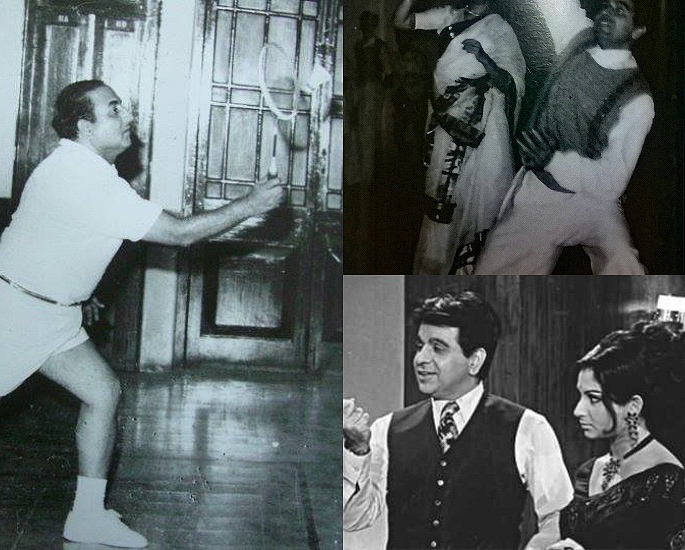 Speaking about the arrangement made for the sport and his credentials as a shuttler, Sharmila states:

“When I was doing ‘Dastaan’ with Dilip Sahab, we had built an indoor badminton court inside the boundary of BR Chopra’s house.

“Yusuf Sahab used to play badminton there. Sometimes he used to invite me to play too.

“He was a very good player.”

It is quite evident that playing badminton was amongst his favourite sports. 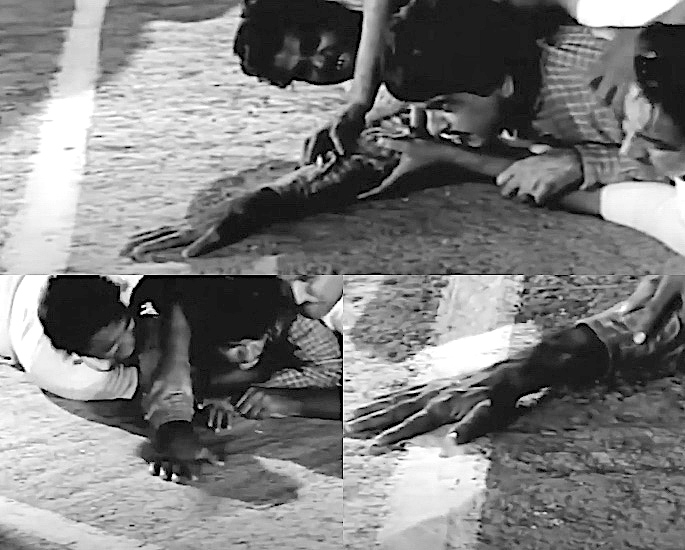 Dilip Kumar may not have played kabaddi competitively, but did so for a scene in the film Ganga Jamna (1961).

The kabaddi that he shows off depicts realism. He is successful with quite a few raids. But his last raid is simply amazing as he just gets over the victory line.

Dilip’s chanting of ‘Hu Tu Tuh Tuh’, stamina, quickness, and ability to hold his breath ensure a nail-biting win for the team he represents.

“The kabaddi of Dilip Kumar was exceptional. His ability, agility, acrobatics, ankle hold, defence, diving, flexibility, left-right moves, and raiding was second to none. 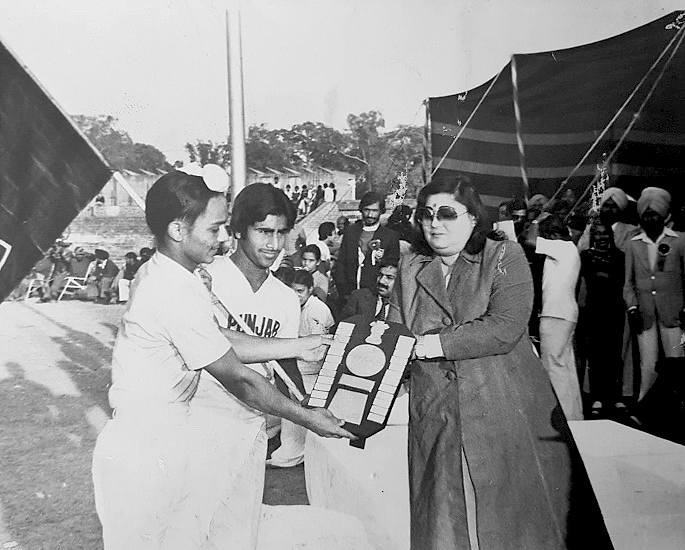 Ashok also gave us a backgrounder, which eventually led him to take up the sport:

“I used to mainly play the sport of basketball. However, when I went through a bad experience with basketball, someone suggested I should consider kabaddi.

“My response to the suggestion was that ‘I am not playing a village sport.”

“Then surprisingly I had a complete u-turn after watching the kabaddi scene in Ganga Jumna.

“I thought if a big star of Indian cinema can play kabaddi, then it must be a good sport.”

“From that day, there was no looking back. Dilip Kumar is and will always remain my sporting hero.”

Ashok believes Dilip Kumar playing kabaddi would definitely have influenced many others to specialise in this sport.

Besides cinema, there is no doubt that Dilip Kumar was very fond of sports. He certainly had a major contribution to sports.

His empathy has had a great impact on humanity and various charitable causes.

He not only took an active interest in sports but also had a positive effect on athletes of various disciplines. He was truly influential and inspirational.

If Dilip Kumar had become a professional sportsperson, one wonders what he could have achieved.

Nevertheless, some of his sporting accomplishments are amazing and cannot be forgotten. Fans and sportspeople will cherish these memories forever.

Images courtesy of Ashok Das, Times of India and The Indian Express.