The stars of Bollywood got together to launch the long awaited autobiography of Dilip Kumar, The Substance And The Shadow. An intriguing insight into his personal journey and acting career, the book unveiling was a glamorous event.

"We can say to generations to come that we lived in the era of Dilip Kumar. Thank you Dilip saab."

When all the stars from Bollywood come together at one venue, the place ought to glitter and shine.

June 9, was one such special evening when Hindi cinema icons like Amitabh Bachchan, Aamir Khan, Dharmendra and many others along with the living legend Dilip Kumar and his wonderful wife Saira Banu, launched Dilip Kumar’s awaited autobiography The Substance And The Shadow, penned down by his close friend and author Uday Tara Nayar.

The event was a great success and saw the presence of celebrities like the legendary writers Salim Khan, Javed Akhtar, the business icon Anil Ambani along with his mother Kokilaben Ambani and also the yesteryear divas, Zeenat Aman, Vaijanthimala, and Farida Jalal. 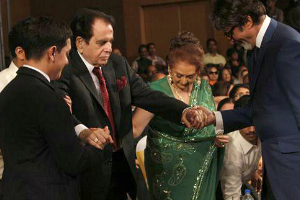 The current generation of Bollywood came to cheer for the launch as well. Spotted were Sanjay Leela Bhansali, Rajkumar Hirani, Ayaan Mukherji, Subhash Ghai, and Ritesh Deshmukh, to name a few.

Dilip Kumar’s wife Saira Banu, who looked beautiful in a dazzling green sari, was amazed to see the fraternity’s involvement in the event. She had twinkle in her eyes throughout, which showed her love and support for the legend.

Before the event, she said: “Please pray that the dedication we have written the book, it is received by the readers in the same way. Every chapter in the book is important and you all will read something that you have not read before about him.”

Madhuri Dixit was seen in a beautiful red saree along with Mr. Nene. She said she wishes that she was born in Dilip Kumar’s era so she could have been his heroine. 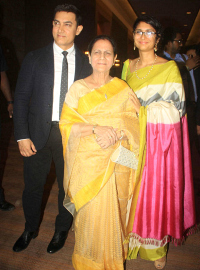 Lata Mangeshkar who was supposed to sing and inaugurate the event was seen missing due to ill health. Madhuri and Vaijanthimala inaugurated the event by lighting the auspicious lamp along with Priyanka Chopra, who looked gorgeous in her black and golden Sabyasachi saree.

Vaijanthimala recalled the Devdas (1955) days when she played Dilip Kumar’s Chandramukhi. She confessed of being so awestruck by his performance that she often forgot her own lines.

The event continued with Aamir Khan reciting a beautiful poem, written by Prasoon Joshi. He described the fabulous actor, who always lived life on his own terms with lines like, ‘Woh aasma choona chahta tha, magar apni sharton par’. Aamir also said that he believes he is the biggest fan of Dilip Kumar.

When Amitabh Bachchan got on the stage, he said:

“Often an actor wonders, how would I have done this scene? When you see a scene performed by Dilip Kumar, you are convinced there is no alternate way to enact the scene.”

Sr. Bachchan also read a passage from the autobiography which narrated an incident at the start of Dilip Kumar’s career where he was asked to run. On being told that he had to run to save the heroine who is about to kill herself, Dilip saab ran so fast in the scene that even the camera couldn’t capture him. Later he was told to run for her, but slower!

Everybody was smiling when Dharmendra shared a few stories of their friendship which involved him and Dilip Kumar being the drinking buddies and exchanging stories with each other till the wee hours of the morning.

Javed Akhtar spoke on the stage too. He said: “We are thankful to you that you are Dilip Kumar, and we can say to generations to come that we lived in the era of Dilip Kumar. Thank you Dilip saab.” 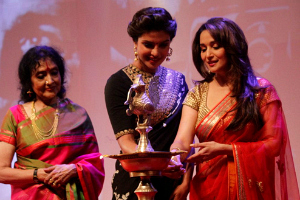 The audience was also treated to the melodies from Dilip Kumar’s movies sung live by Shaan and Javed Ali. It was a big nostalgic moment when songs like, ‘Ude Jab Jab Zulfe Teri’ and ‘Dil Diya Hai, Jaan Bhi Denge’ echoed the room.

There was also an audio-visual clip showcasing the legend’s life, gathering his interviews of six decades. It showed his life journey, born as Mohammad Yusuf Khan,he entered Bollywood industry in 1944 with the film Jwar Bhata, which did not work. After facing failure, he was back with a bang with unforgettable films like Naya Daur (1957), Devdas, Madhumati (1958), Mughal-E-Azam (1960), Gopi (1970), Ram Aur Shyam (1967), Shakti (1982), Saudagar (1991) and many more.

Just before the conclusion, Dilip Kumar was brought on to the stage by Amitabh Bachchan, Dharmendra and Aamir Khan. The stage looked one of the rare moments when such legends come together to make history.

The author of the book, Nayar revealed that the title, The Substance And The Shadow was suggested by Dilip Kumar himself, where the ‘substance’ states the actual person behind the legend and the ‘shadow’ happens to be the mythical image that has come to surround his persona.

Dilip saab’s life has been a very mysterious one as he hasn’t spoken much to the media, so one can only hope that the book answers all the unanswered questions of his life. The book is known to archive the 91-year-old’s life journey from his youthful days to the present, the ups and downs in his life, as narrated by Dilip Kumar to the author.

Komal is a cinéaste, who believes she was born to love films. Apart from working as assistant Director in Bollywood, she finds herself doing photography or watching Simpsons. “All I have in life is my imagination and I love it that way!”
Holiday: A Soldier Is Never Off Duty ~ Review
London Indian Film Festival 2014 Programme