A British Asian man has been handed a life sentence for murdering his ex-wife. Footage from CCTV showed him dragging a suitcase, containing her body, away from his home.

"You clung to the view you were the dominant force of the family and were entitled to control events."

A British Asian man begins a life sentence for the murder of his ex-wife. Identified as 51-year-old Ashwin Daudia, he was found guilty of her murder on 2nd February 2018.

The trial took place at Leicester Crown Court. Ashwin’s sentence means he must serve a minimum of 18 years in jail.

On 16th January 2017, he strangled 46-year-old Kiran Daudia, who returned home from work after a morning shift. He killed her using her own scarf and put her body into a suitcase.

After cleaning up the scene, he dragged the suitcase into the back garden. At night, he then moved it into the street, nearby a neighbour’s backyard in an alley. Meanwhile, Kiran’s family reported her as missing, believing she hadn’t returned home from work.

Police went to the house, where she and Ashwin lived with their two sons, and questioned the 51-year-old. However, he claimed he hadn’t seen her.

The next day, neighbours called officers to report an abandoned suitcase near their backyard. Upon investigation, CCTV footage also showed Ashwin dragging the suitcase from his house to a street nearby, outside the neighbour’s property.

As a result, officers arrested the man and charged him with murder on 18th January 2017.

The court heard how Ashwin and Kiran divorced back in 2014, after having an arranged marriage in 1998. They continued to live together with their sons in their house, but it was eventually sold to Kiran’s sister.

The 51-year-old was supposed to vacate the residence on 16th January – the day of Kiran’s death. Ashwin claimed that he and his ex-wife had an argument when she returned from work to still find him there. 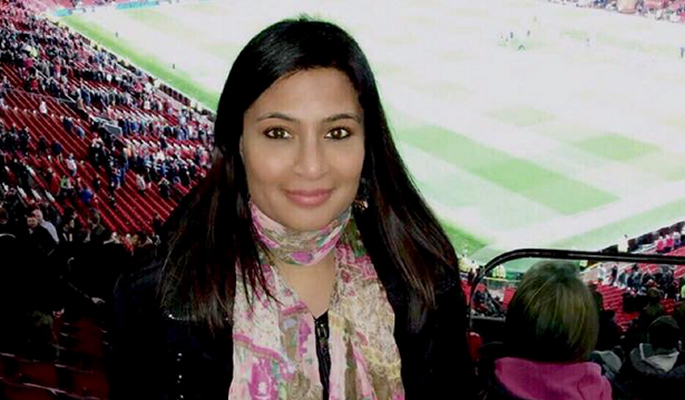 He said he “lost control” during the fight and added: “I became very angry at what she is doing, she’s not listening.”

Ashwin also claimed his ex-wife became violent during their argument. While the investigation found 18 injuries on the 46-year-old, her ex-husband had none.

After delivering the verdict, Judge Spencer explained: “She was bright, academically gifted, outgoing, fashionable and westernised. You were less bright, but your cover up in this case reveals you’re not without wit or, for that matter, cunning.

“You clung to the view you were the dominant force of the family and were entitled to control events.”

The victim’s family also released a statement after the sentencing and said:

“Kiran was full of life, with a vibrant personality, a loving, caring mother and a very thoughtful daughter, sister and aunt. Her friendly and charismatic nature meant she had many friends.

“We as a family cannot even begin to describe the loss and emptiness in our heart. Her perpetual smile will be missed everyday of our lives by everyone who knew her.”

They also gave their thanks to officers involved in the investigation. Whilst her family believe Kiran now has justice, they added life would not be the same without her.