The gorgeous model-actress Iman Ali gets married to Babar Aziz Bhatti in Lahore. Close family and friends attended the mayun, shendi and walima.

“Love the traditional bride look of the hottest model"

Supermodel Iman Ali ties the knot with Babar Aziz Bhatti in Lahore. Despite the wedding being a private affair, close family and friends were in attendance.

The pre-wedding festivities began with the dholki and mayun. The shendi came next, with the walima wrapping up the wedding.

Throughout all the functions, Ali looked stunning in the different outfits. Even the celebrities who came for the various ceremonies looked very stylish and dapper.

Many were surprised when celebrity friends made her engagement announcement early in 2019.

It became more obvious when the Khuda Ke Liye (2007) actress put an image of her and Bhatti spending time together perhaps in the middle east.

Babar comes from an army family, with Major Aziz Bhatti Shaheed who received the Nishan-Haider being his grandfather. 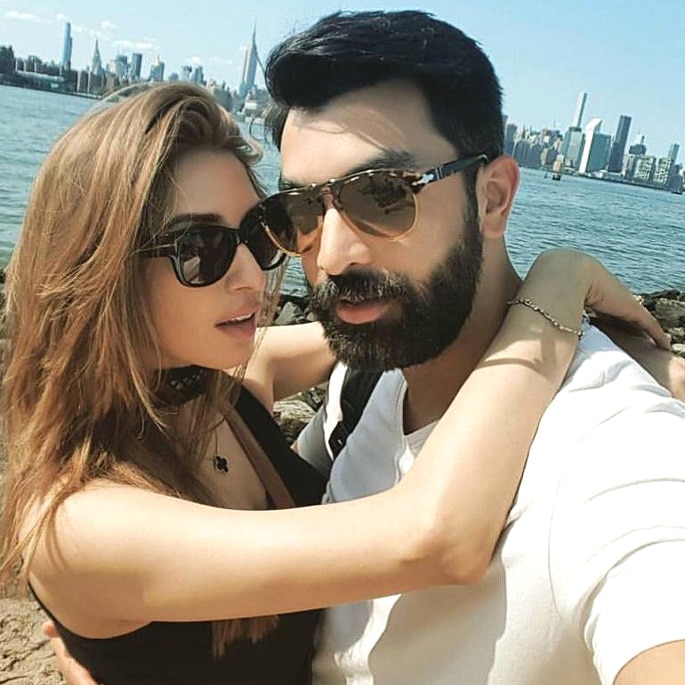 Following the dholki, which took place a week earlier, the Mayun function got the wedding festivities going.

Images from the mayun ceremony went viral on social media. 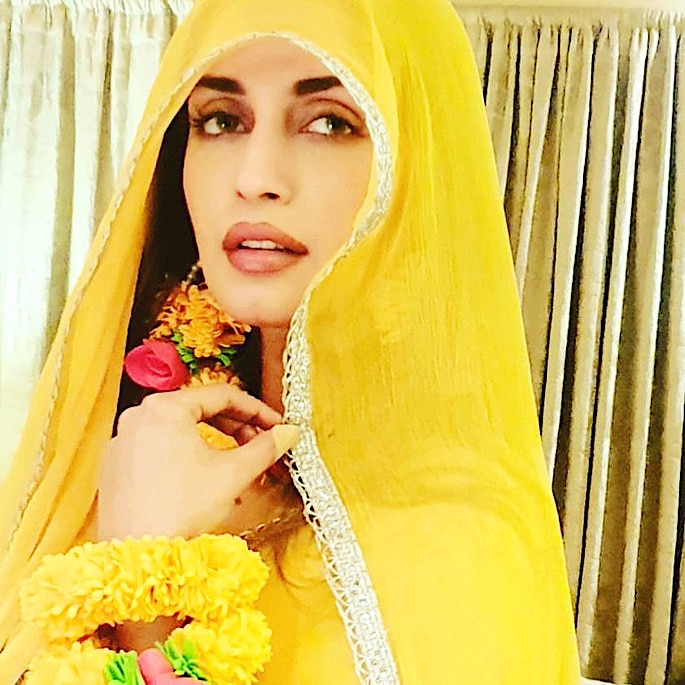 Iman went on Instagram and shared an image of herself. Looking pretty in a minimalistic look, she wore a bright yellow traditional shalwar kameez. 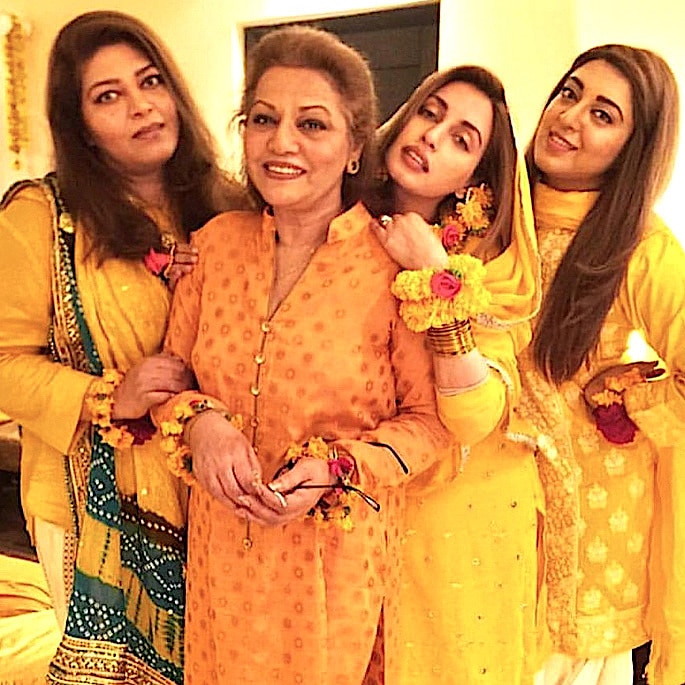 The official page for Vogical shared an image of Ali on Instagram surrounded by close family. They captioned it:

Iman is the daughter of veteran Pakistani actors Abid Ali and Humaira Ali. 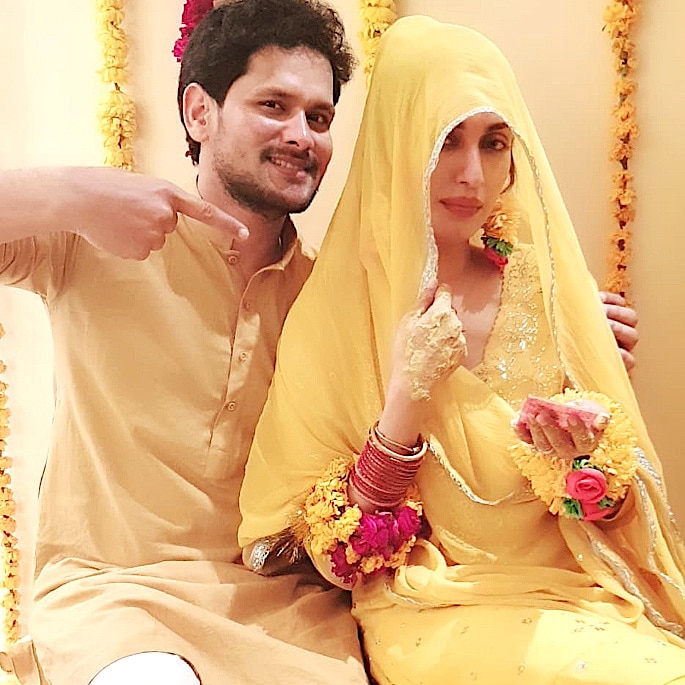 Pakistani actress Urwa Hocane and singer Farhan Saeed made an appearance at the function, alongside eminent choreographer Gohar Hayat

Hayat went on Instagram to share some pictures from the event. In one of the images, he is sitting next to Ali and pointing the finger towards her.

In another image, he is standing and kind of taking a selfie with Hocane. 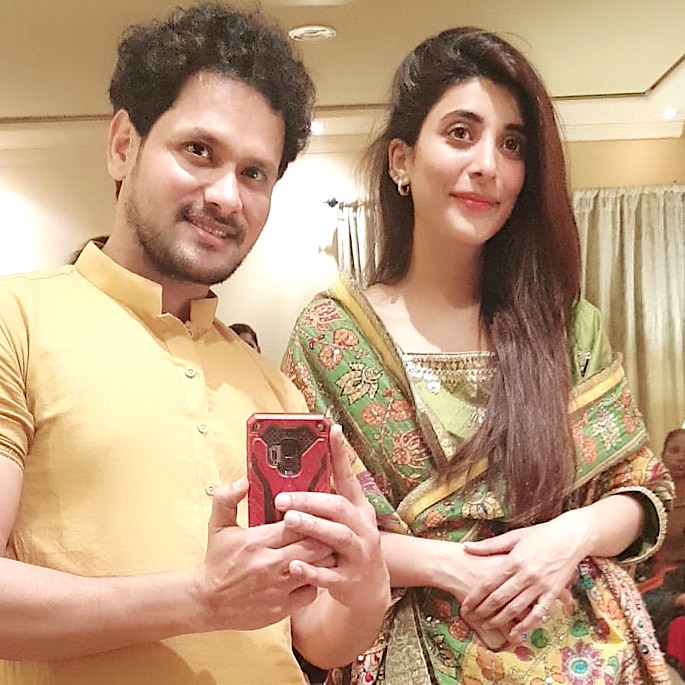 Gohar also shared a video where we get to see a shy Iman giggling away. He captioned that post writing:

Iman and Babar had a shendi on February 21, 2019, which began with the nikkah followed by the mehndi. 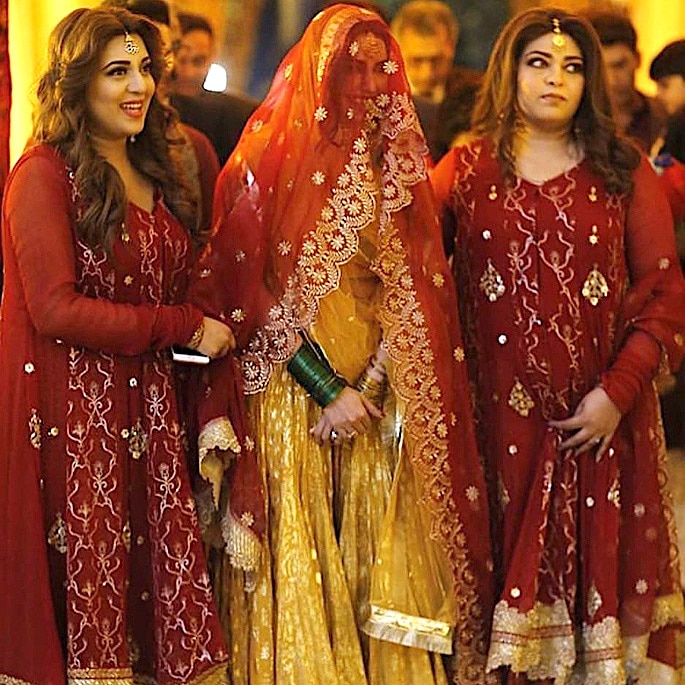 The attractive Ali made her entry to the shendi with her sisters. She was wearing a yellow mustardy lehenga with a red dupatta.

A picture of Iman sitting on the stage posted by Kiran Malik on Instagram showed the finer details of her outfit by designer Shahzad Raza. 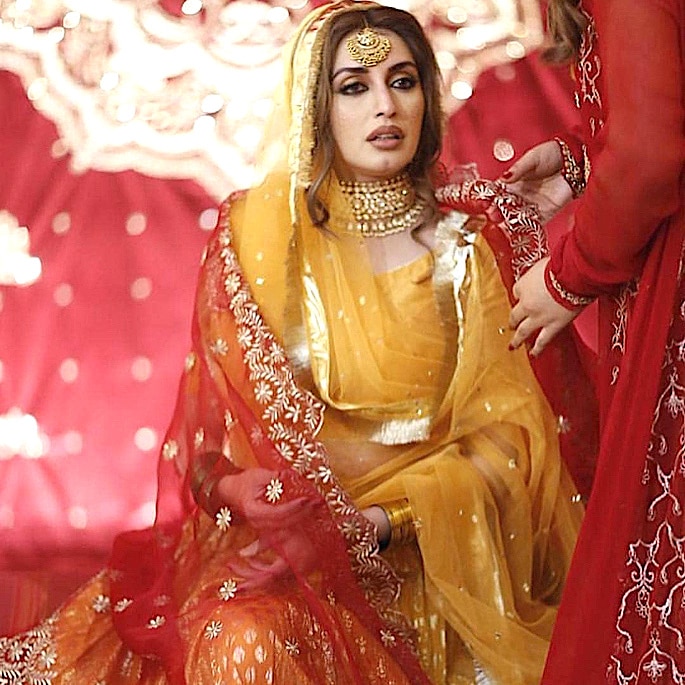 “Love the traditional bride look of the hottest model @imanalyofficial .

“That vibrant yellow dupatta with Kiran and Gotta is so damn gorgeous and I loved the way she carried her look along with a braid and traditional jewellery. Goals!” 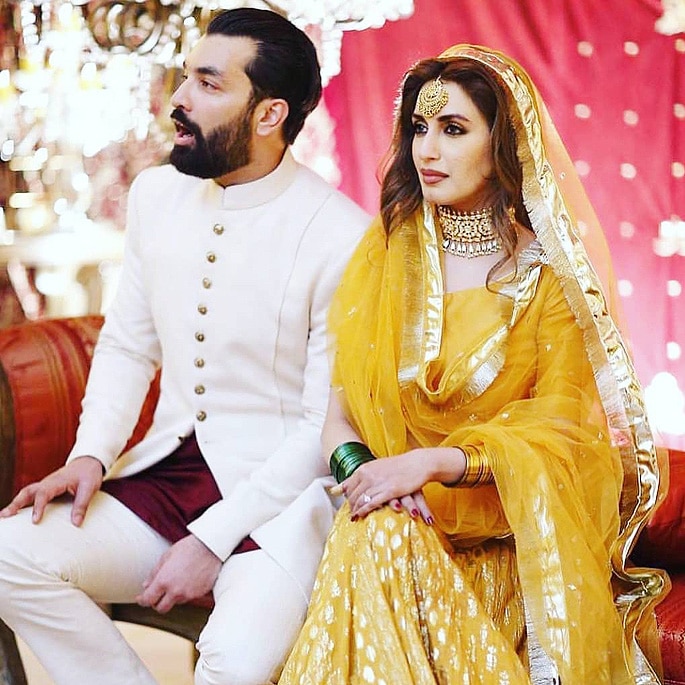 “How gorgeous the look together. Newly wed couple ImanAly and Baber Bhatti on their #Shendiin #Lahore last night”

From the photograph, it is clear that Babar wore a white elegant sherwani.

Several other images made their way on Instagram courtesy of the official photographer Irfan Ahson. 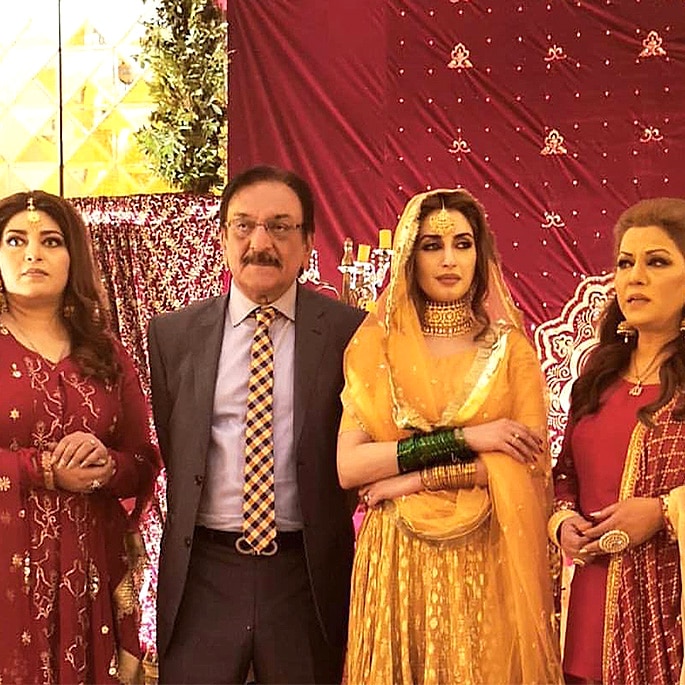 In one picture Iman is standing with her family, including parents Abid and Humaira Ali.

As part of the shendi, the second part of the function comprised a lot of glitzy ‘naach ganaa’ (music and dance). 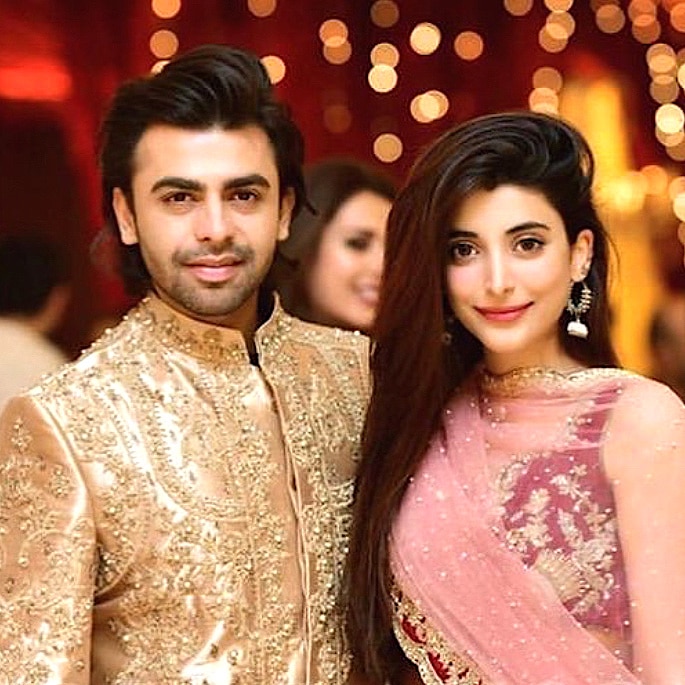 Despite appearing as a conventional bride, Ali soon came onto the dance floor. Iman shared a video of herself dancing to ‘Swag Se Swagat’ from the film Tiger Zinda Hai (2017).

Bhatti did not hold back as he also hit the floor, dancing to ‘Mundian To Bach Ke’ by Punjabi MC.

Soon all the celebrities joined in for some boogie-woogie

The final function of the wedding was the walima (reception). 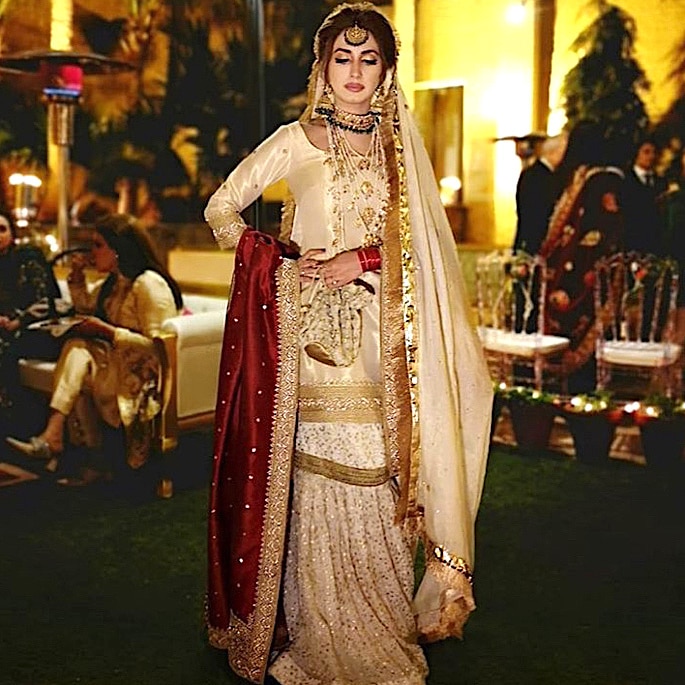 At the walima, Iman wore a pale gold gharara, along with a green necklace.  The gold and maroon dupattas completed her look.

On the other hand, Babar wore a dashing blue suit and a matching bow tie to go with it. 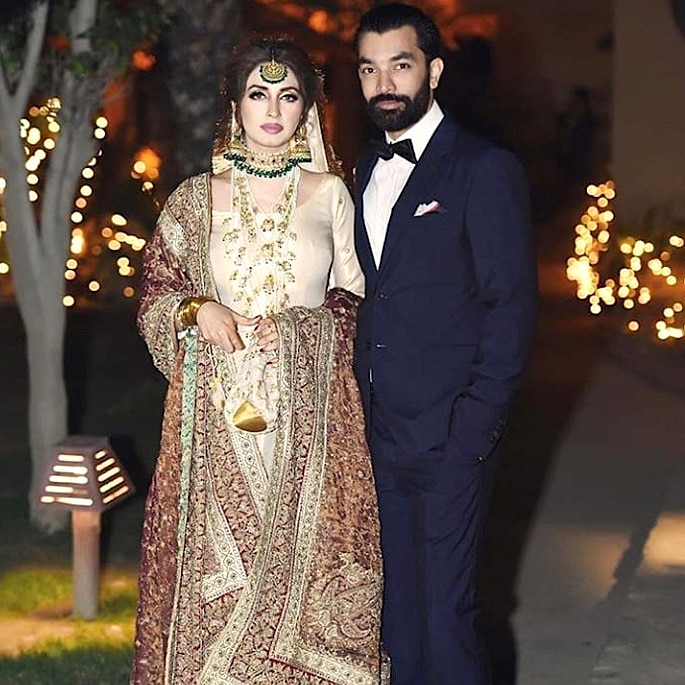 Once again many celebrities attended the ceremony, with Farhan Saeed and Ali Zafar also singing on the occasion.

And that was the wedding highlights of Iman Ali and Babar Bhatti. Besides her personal life, it is looking bright for Iman on a professional front also.

Ali who is selective when it comes to film and TV projects is all ready for a comeback in the movie Tich Button.

This is Urwa’s first film as a producer and features Farhan, Feroze Khan, Sonya Hussyn in lead roles. A co-production of ARY Films and directed by Qasim Ali Mureed, the film release in 2019.

For now, Iman Ali and Babar Bhatti will enjoy the start of their married life. DESIblitz congratulates the newly wedded couple.

‘Total Dhamaal’ is an Unstoppable Hotchpotch
Who is Shivaansh’s Ex-Girlfriend in Ishqbaaz?