Angry housemates, love triangles and Salman Khan all make for juicy content in Week 1 of Bigg Boss 9. DESIblitz brings you all the drama and highlights!

Things don't get any better during the first luxury budget phobia task.

This year’s Bigg Boss contestants waste no time in causing controversy and chaos in the house.

After the pleasantries are over between the contestants, the realities of the double trouble pairings hit home.

Each pair is only allowed to keep the luggage of one partner, whilst the other one is shredded!

Letting go of her gear proves especially difficult for Bollywood actress Rimi Sen, and this rubs her partner Suyyash Rai the wrong way!

Things don’t get any better during the first luxury budget phobia task.

Each pair has to nominate rival couples to face their fears which include fear of belly buttons, balloons and tattoos! 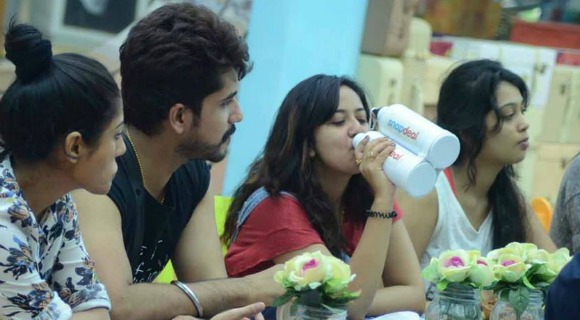 Now Rimi just isn’t prepared to stamp ‘Bigg Boss 9’ on her body for the rest of her life.

Suyyash is visibly angry with his uncooperative partner and also offloads his frustration on Bigg Boss!

Speaking of frustrations, Rochelle struggles to be apart from her VJ-turned-actor Keith, who has been strapped with model Mandana.

The new pair looks pretty flirty at the start of the week, which may be why Rochelle is seen warning Keith that his double is potentially ‘trouble’ and tells him to be cautious.

The weekly nominations are launched early on in the week and a total of four pairs are up as follows:

After successfully beating Aman Verma and Kishwer Merchant in a yoga task, Yukiva Choudhary and Vikas Bhalla are crowned captains.

On the day of Navatri, other housemates are given the option to change their ‘double trouble’ pairs.

Surprisingly, Keith and Rochelle do not opt for each other, apparently because they are dating! Keith wants Ankit or Kishwer instead.

But only two pairs are allowed to swap and it is Rimi and Suyyash who part ways, but it doesn’t seem like much love is lost between the two as Rimi settles with Rochelle.

Prince is now much in demand during this task and is eventually paired with Suyyush.

This is a far cry from the show’s first night when the girls declare they don’t want to Jodi up with Narula.

Salman Khan lives up to the hype as he gets stuck in with his views on the first weekend show. 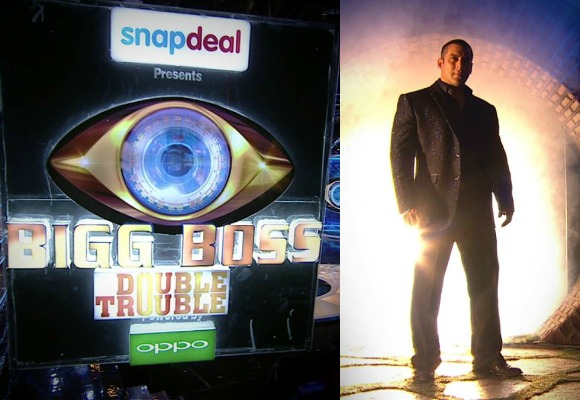 He quizzes Suyyash about his heated behaviour which has escalated through the week, and calls him the ‘angry young man’.

Suyyash moans about not being able to spend time with girlfriend Kishwer, blaming her partner Aman for getting in the way.

Salman firmly points out that the couple should have been vocal about wanting to share quality time.

The actor also advises Rimi to liven up and ‘start to be seen’.

Shahid Kapoor and Alia Bhatt make an appearance both in the house and on stage, promoting their upcoming movie Shaandaar (2015). 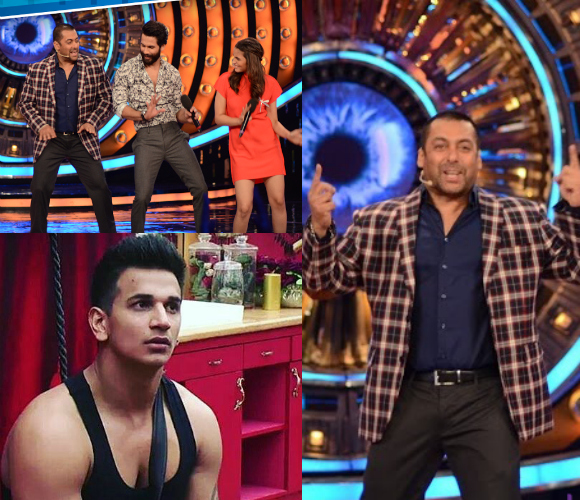 Up next is a live chat between the house and Sonam, Salman and actor Ayushmann Khurrana, who warns the housemates to take their tasks seriously.

When Akash asks why he decides to return to Season 9 of Bigg Boss, Salman replies: ‘They know the show won’t work without me.”

Finally the show’s first evictee is revealed and shockingly real-life love rat Ankit Gera is given the boot.

Despite high hopes, Ankit fails to make headlines, proving silence leads to nothing but the exit door in the Bigg Boss house.

Catch Bigg Boss 9 every weeknight from 10.30pm on Colours TV and every weekends from 9pm with Salman Khan.