Best Dressed Stars at GQ Men of The Year Awards

The GQ Men of the Year Awards saw a fabulous display of suave suits and lovely dresses. We look at the finest dressed during the award night.

"There is no doubt that he was the best-dressed"

The stars took to the blue carpet for the GQ Men of the Year Awards 2019, parading an array of unique styles.

There were celebrations for contributions in sports, music, fashion, cinema, culture and environmental fields.

The awards show saw many take home trophies. Yet, it was their fashion A-game that got everyone talking.

Everyone in attendance dressed to impress, from tailored suits, ethnic wear, gowns and retro inspirations, the list is endless.

We look at 10 of the best-dressed celebrities. 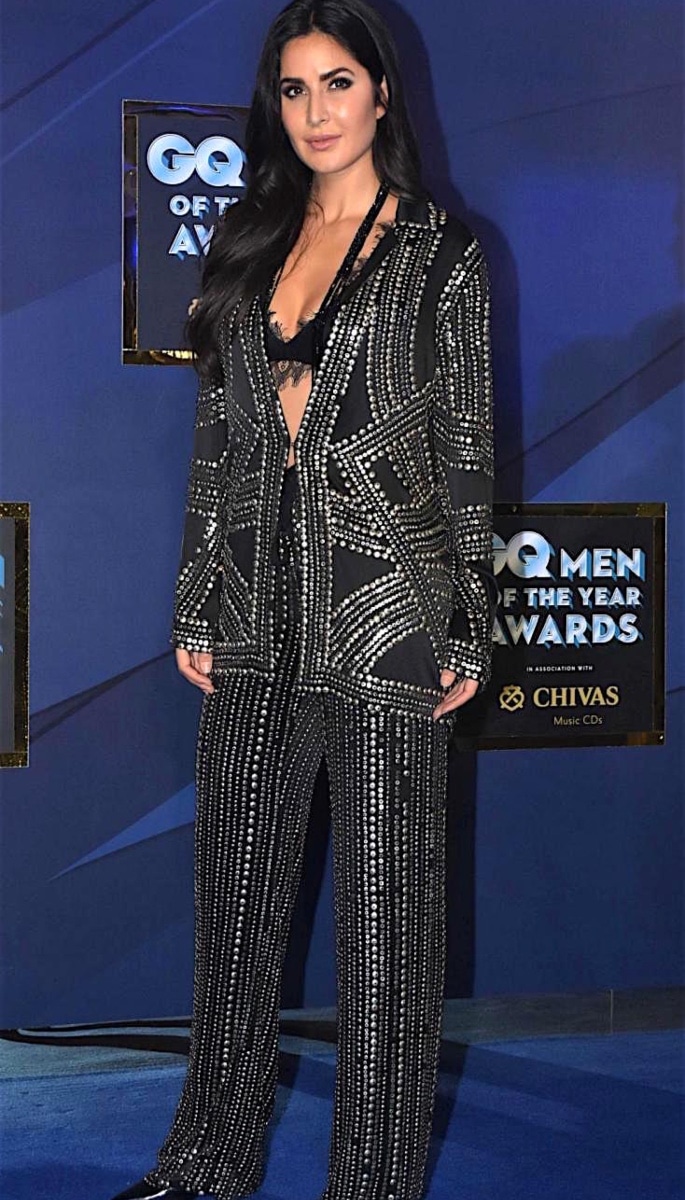 Bollywood beauty Katrina Kaif took everyone’s breath away with her power suit. This black three-piece ensemble was designed with silver embellishment throughout.

It included relaxed-fit blazer and baggy trousers which elongated her legs while covering most of her pointy heels.

A twist to this suit was the bralette, featuring a V-shape neck design.

Katrina decided to skip the jewellery, and instead accessorised with a thin strap-like scarf complete with tassel detailing.

Her makeup enhanced the monochrome look further with matching smoky eyeshadow and a nude lip.

She was awarded the Rule Breaker of the Year Award. 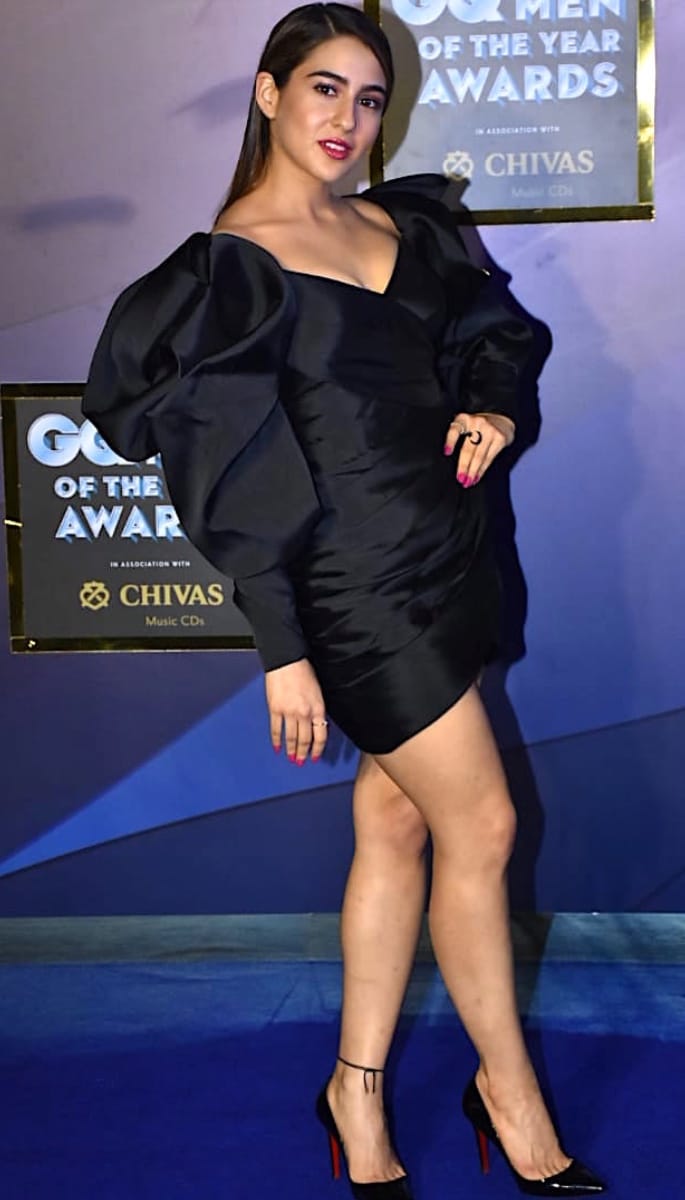 The voluminous ruffle sleeves with a V-shaped neckline were certainly the focal point of the dress.

She went with sleeked back hair and a bold lip matching her vibrant pink nails.

To round of her outfit, she wore black pointed heels which complemented the leggy look.

This stylish beauty took home the Breakthrough Talent of the Year Award. 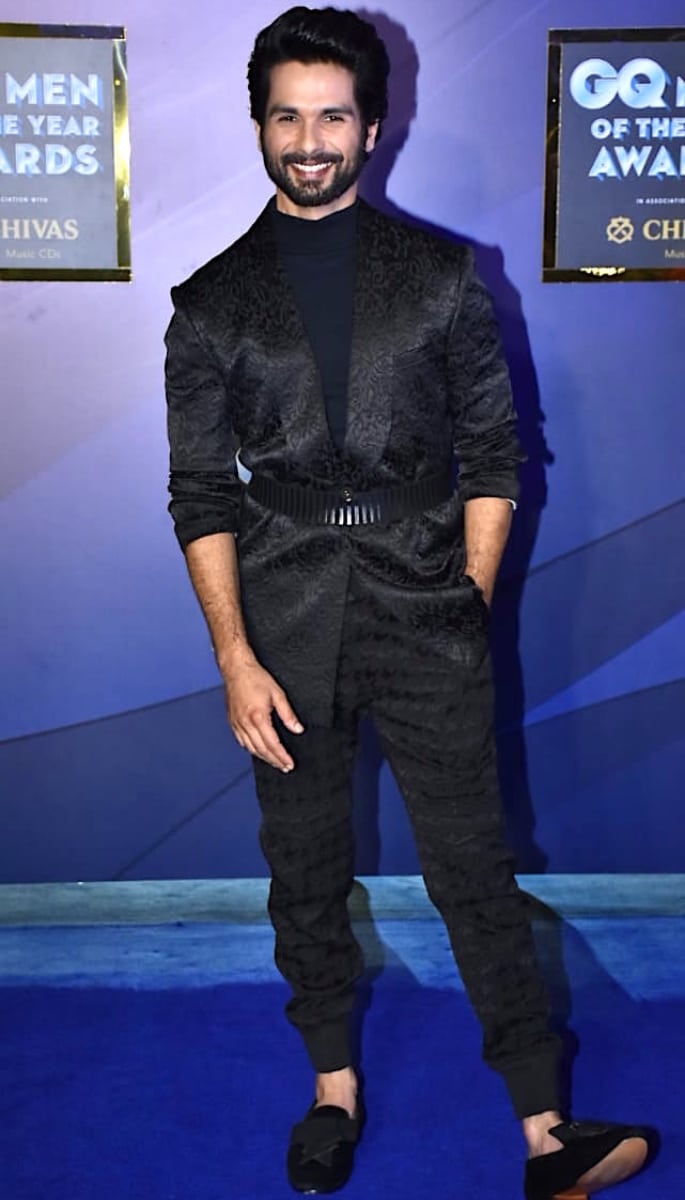 Shahid Kapoor graced the blue carpet in an all-black ensemble.

His outfit consisted of a two-piece suit combination. Yet, he teamed the suit with a turtle neck creating the ultimate smart-casual look.

In this instance, it was the black waist belt that stole the attention. This statement piece for a man’s tailored suit enhanced his sartorial measure.

There is no doubt that he was the best-dressed man at the award night as well as winning the Ultimate GQ Man of the Year Award. 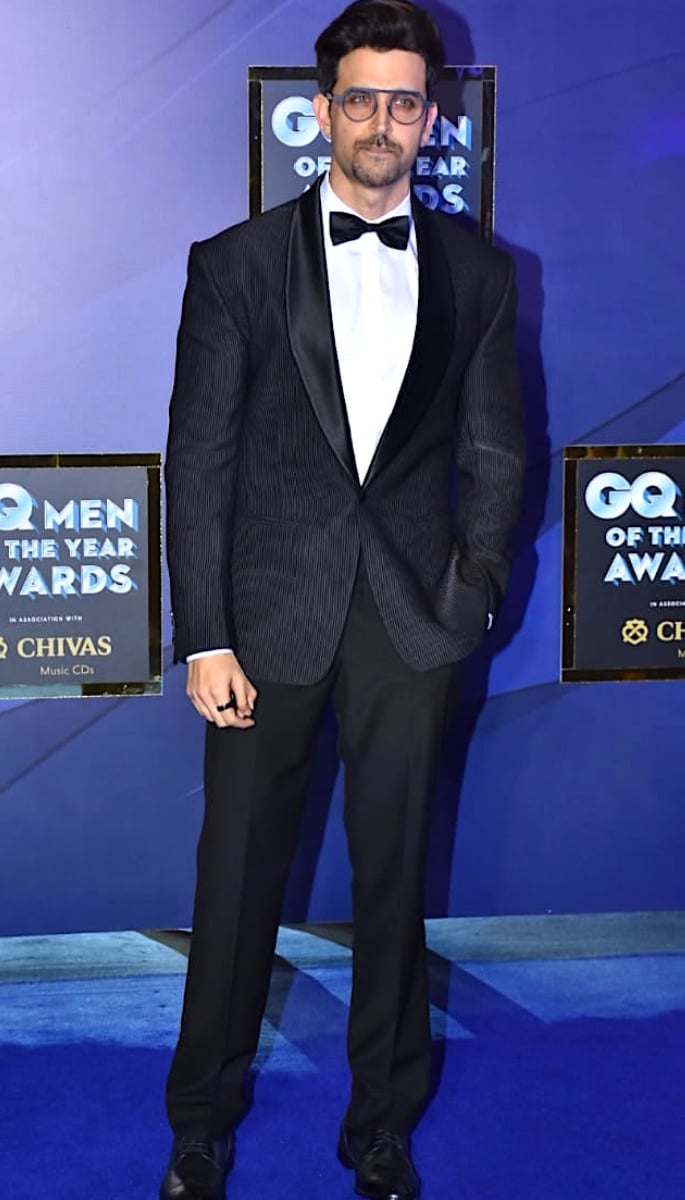 The black and white colour combination is elegant and never fails to impress.

“Before he heads to #War soon, @iHrithik is here to make the audience drool over his sartorial choices”.

Hrithik sets a perfect example of how a suit is a timeless and suave outfit for men to wear.

He took home the Game Changer of the Year Award. 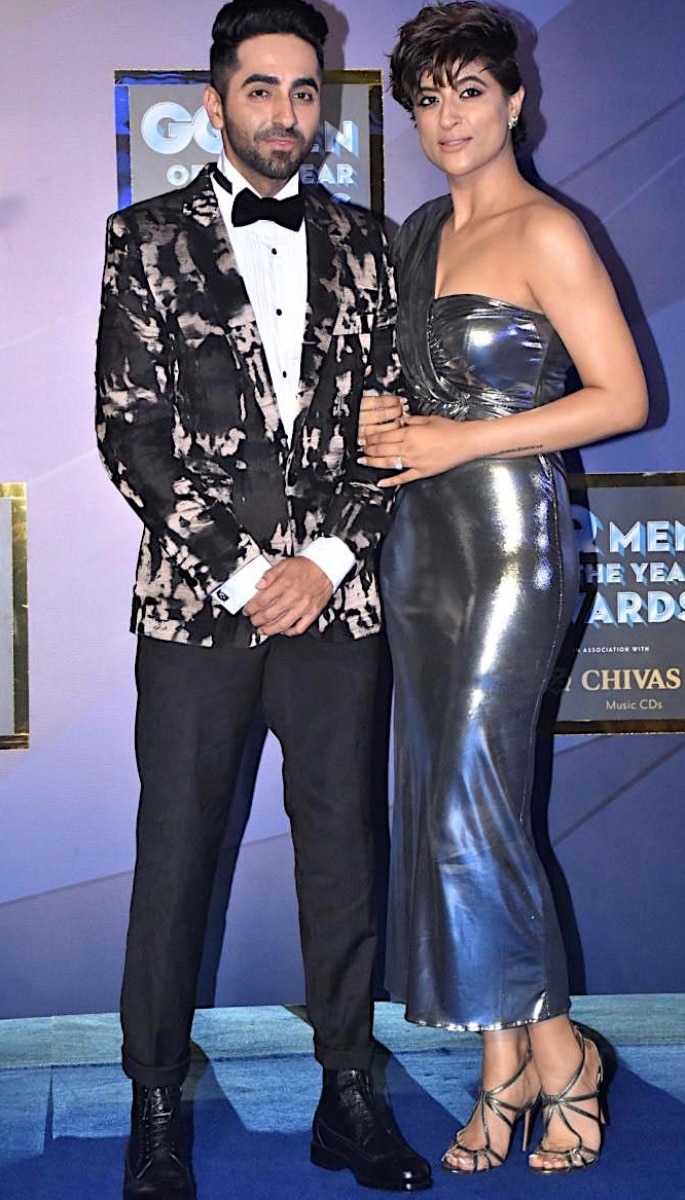 He was seen wearing a stylish tuxedo. The blazer showcased his quirky sense of fashion.

The eye-catching marble print provided a unique aesthetic to his outfit.

Meanwhile, his wife wore a stunning shiny silver dress. A fusion of east meets west was evident in the design.

The pallu feature across the shoulder added a dimension to the dress. Tahira chose matching silver strap heels and glam makeup to finish off her attire.

The night was certainly a reward for the power couple as Ayushmann Khurrana won the Actor of the Year Award. 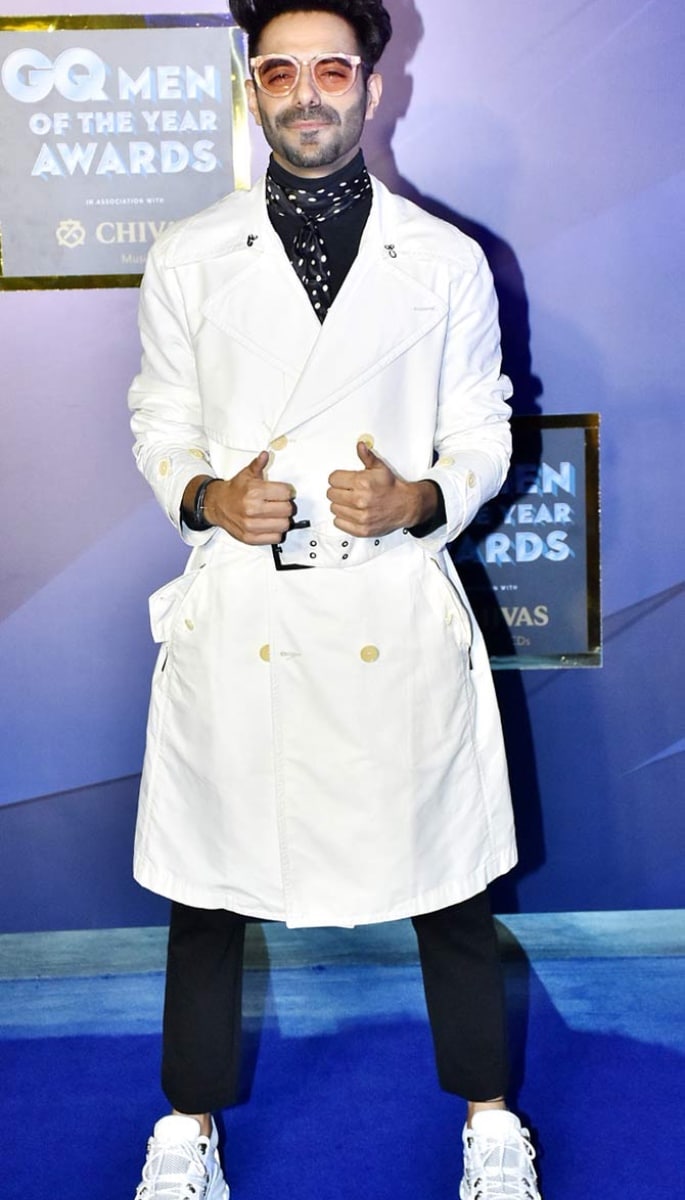 The younger brother of Ayushmann Khurrana, Aparshakti took to the blue carpet in a seemingly different style than his brother.

For the award night, he chose a funky attire. He wore a bright white trench coat teamed with a turtle neck and polka dot scarf tied around his neck.

To accompany the white in his coat, he styled his outfit with chunky retro trainers.

Aparshakti’s otherwise monochrome ensemble was given a spurt of colour with his pink-tinted glasses.

His experimented look surely paid off. 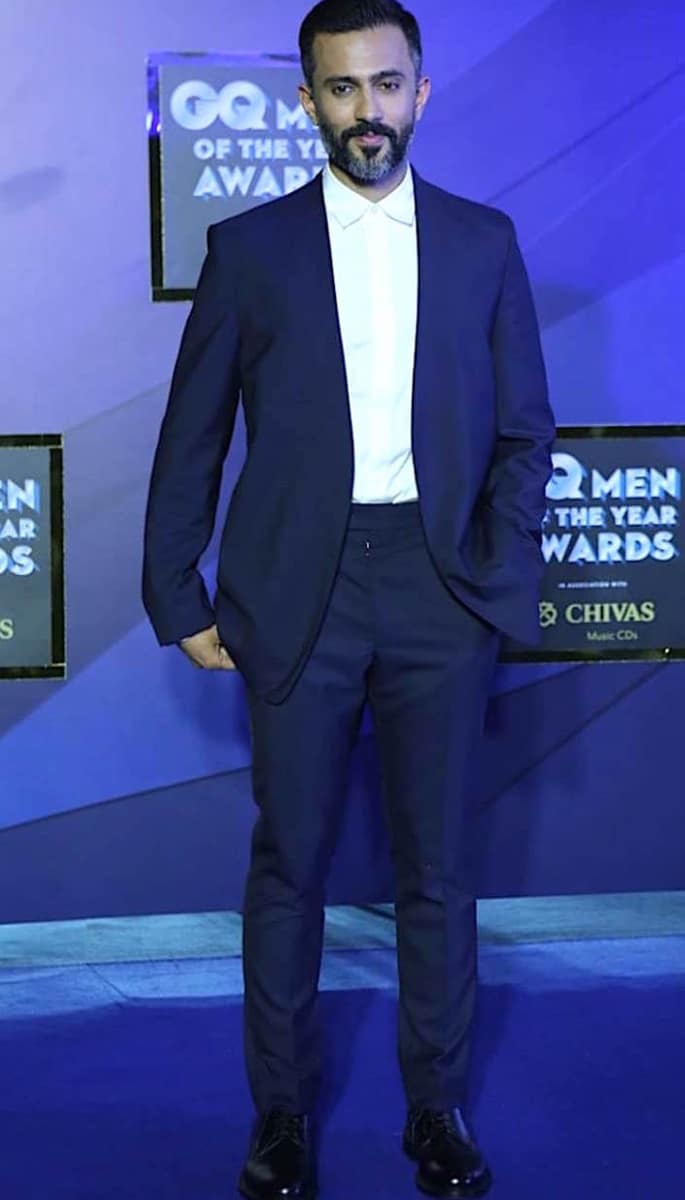 Despite not wearing a pair of trendy trainers like he usually does, his sartorial elegance was elevated with oxford shoes.

Alongside being a successful man in his field and husband to Sonam Kapoor Ahuja, Anand is a fashion icon to many.

Hence, it was only right he won Most Stylish Man of the Year Award. 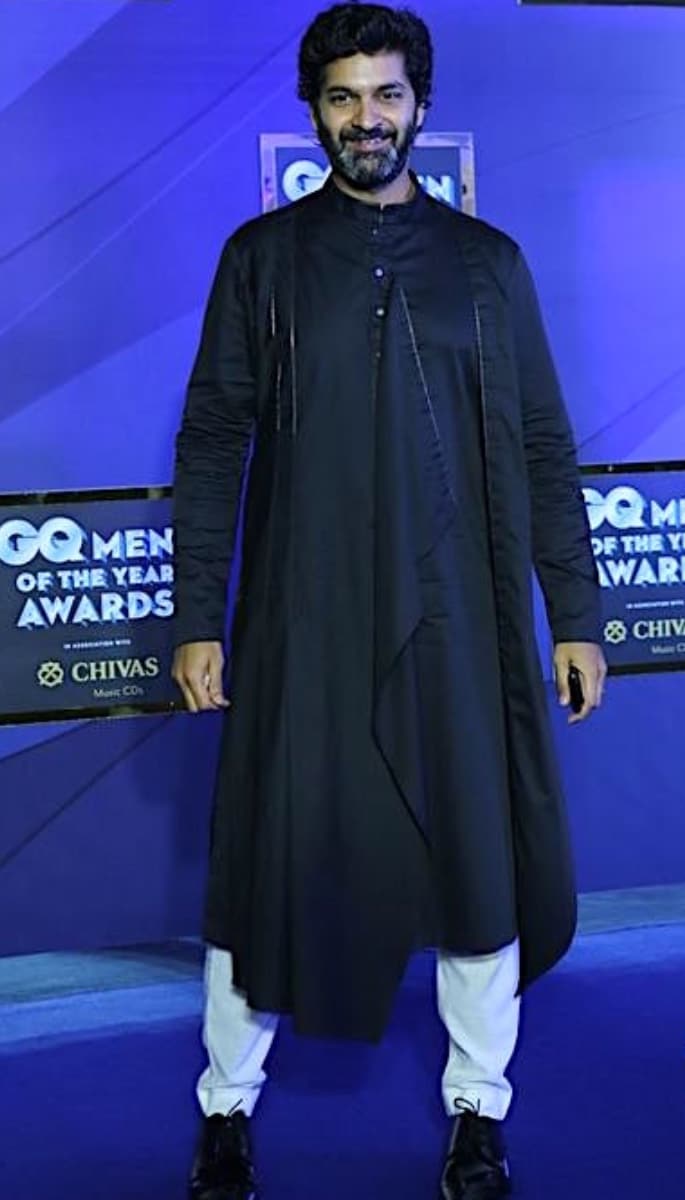 Actor Purab Kohli selected an elegant salwar kameez with a twist as opposed to a classic suit.

His efforts did not go unnoticed. The blacktop was seemingly a kameez and jacket in one.

The flare down the middle of the kameez provided it with a flowy style.

He chose to match the look with classic oxford shoes enhancing his chic fashion fusion. 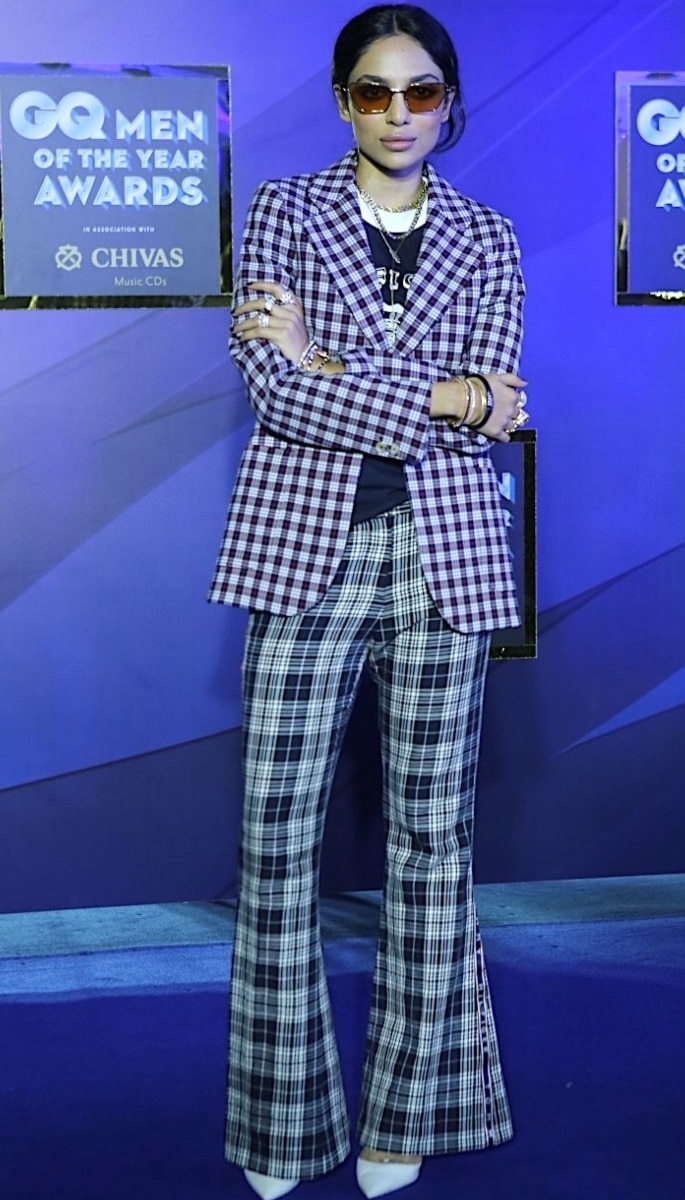 Actress Sobhita Dhulipala is known for her out of the box fashion sense. She is not afraid to experiment with her looks and try something unconventional.

In this instance, she wore a contrasting checker print ensemble. The blazer consisted of red, black and white small box print, while the trousers were black and white.

She chose a graphic black and white t-shirt to wear underneath.

Despite this mismatch outfit, she stayed true to herself and oozed confidence.

The notion of less is more did not apply here. Sobhita donned numerous bracelets and rings with a pair of eccentric sunglasses.

As a result of Sobhita’s success of her Amazon Prime Series Made in Heaven (2019) and Netflix’s Bard of Blood (2019), it is no surprise she received the Emerging Star of the Year Award. 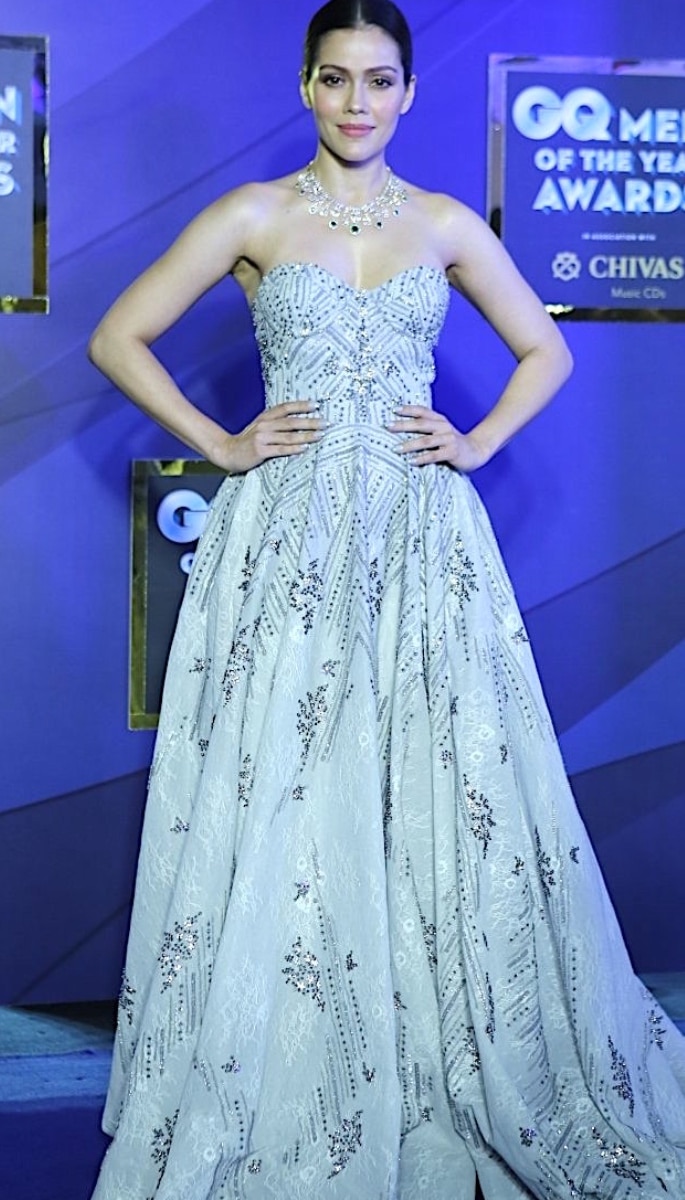 Waluscha De Sousa was truly a vision in white.

Her beautiful gown entailed intricate embroidery on the bodice with delicate work throughout the skirt.

The inclusion of a voluminous skirt with a trail allows for a fit and flare design.

She completed her blue carpet look with an amazing diamond necklace.

Waluscha decided on soft makeup with a sleek low bun, this allowed for all eyes on her dress.

The GQ Men of the Year Awards 2019 certainly saw fashion at its finest. The blue carpet was graced with various visions of style which turned heads for all the right reasons.

To see who won on a star-studded night, visit the official GQ website here.