The off-shoulder top was dramatic and featured a voluminous cape

It was Grazia’s first event and it honoured millennials across various genres for their ability to inspired new ways of thinking and living.

This includes Bollywood celebrities who graced the red carpet with stunning dresses and pantsuits in distinct styles and colours.

The event was unlike most red carpet events as celebrities would usually opt for voluminous gowns and sleek ensembles.

From Deepika Padukone to Radhika Apte, the stars were at their stylish best for the event.

While some celebrities won awards, others made an impact with their outfits. We look at some of the best dressed. 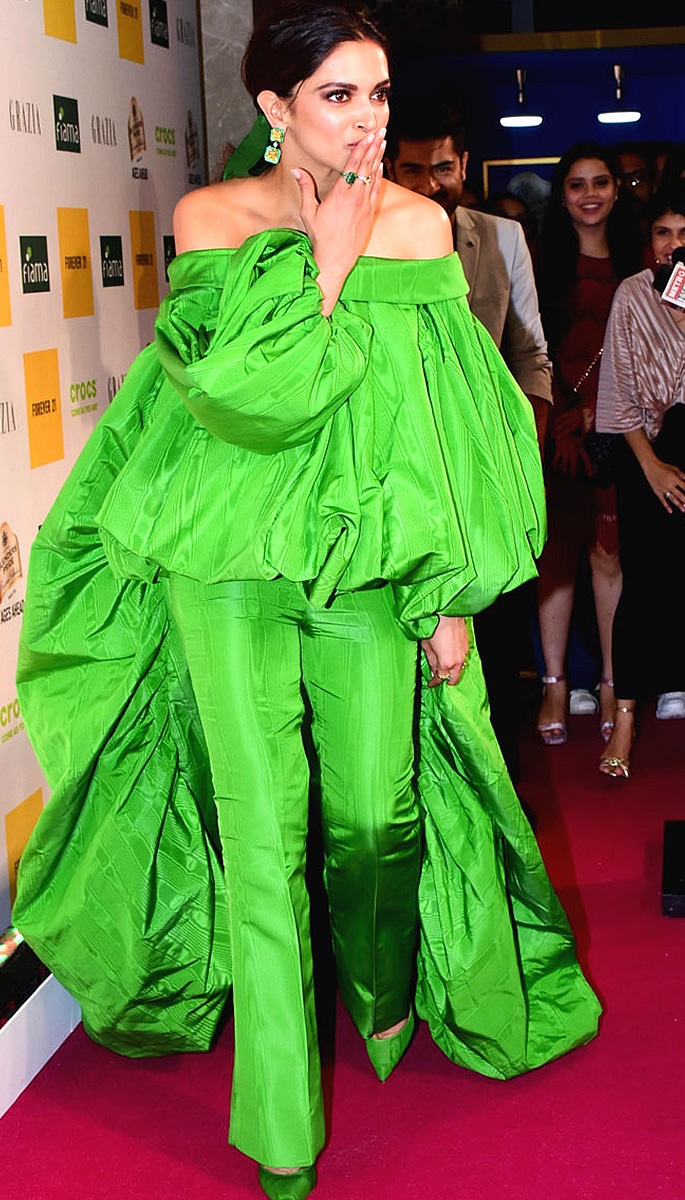 Actress Deepika Padukone received the Millenial of the Year Award and she also made an impact with her outfit choice.

The actress opted for an all-green look by wearing a quirky outfit by Ashi Studio.

The off-shoulder top was dramatic and featured a voluminous cape, which was teamed with a pair of matching bell-bottomed trousers.

Deepika finished the look with a pair of green heels and classy earrings.

Styled by Shaleena Nathani, the outfit got some mixed reactions. Having said that, Deepika is known for her impactful outfits. Her hair and minimal make-up were on point. 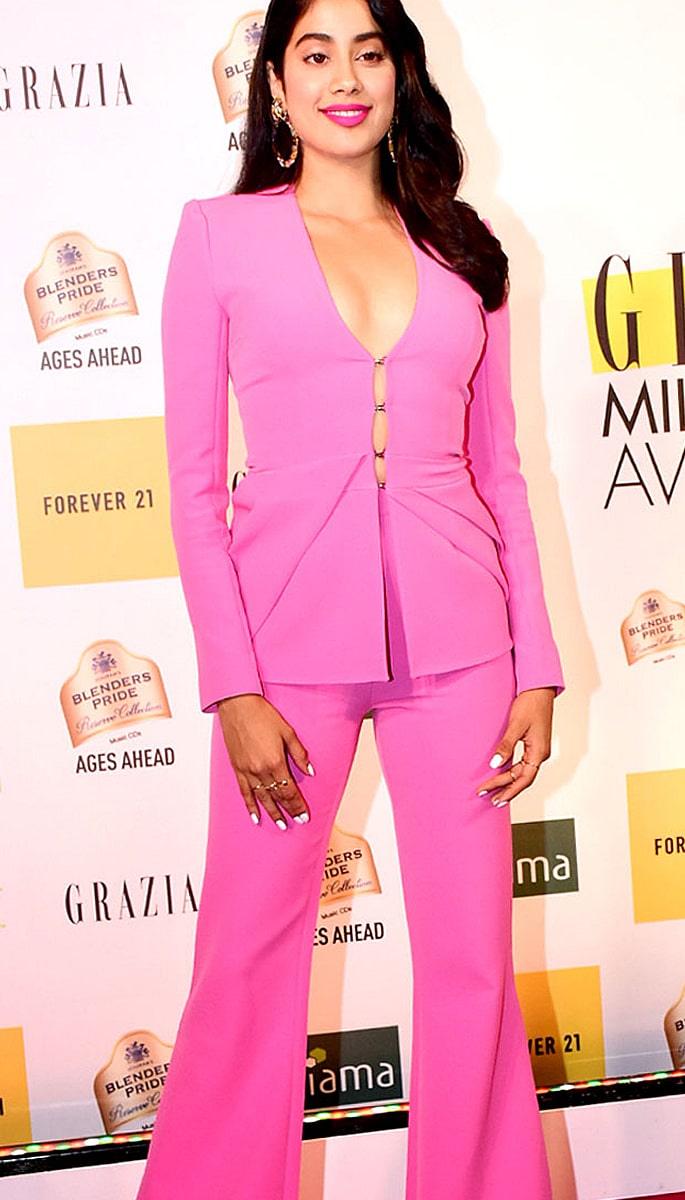 Actress Janhvi Kapoor was at the event to receive the award for Rising Star of the Year and opted for an all-pink outfit.

She chose a vibrant pink pantsuit from British luxury womenswear brand Safiya which had a plunging neckline.

The actress was styled by Lakshmi Lehr and completed her look with bold pink lipstick and embellished black stilettoes.

Janhvi left her hair open in soft curls and she looked stunning in her formal ensemble.

On the work front, Janhvi will be seen next in Karan Johar’s period drama Takht (2019) 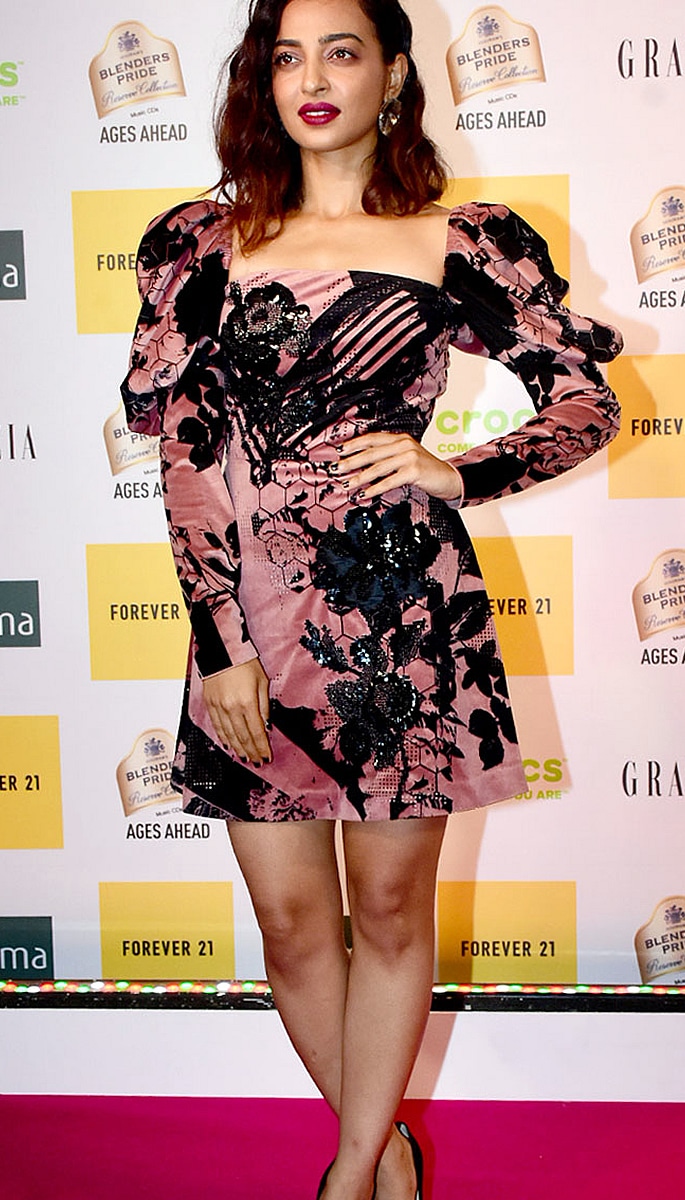 Lust Stories actress Radhika Apte picked up the F 21 Disruptor of the Year and showed off her retro side.

She walked the red carpet wearing a printed edgy velvet dress that was pink and black. Radhika also went for a wavy hairstyle and chunky earrings.

Make-up artist Kritika Gill completed the actress’s look with a dark red lipstick, which made her look even more stunning at the event. 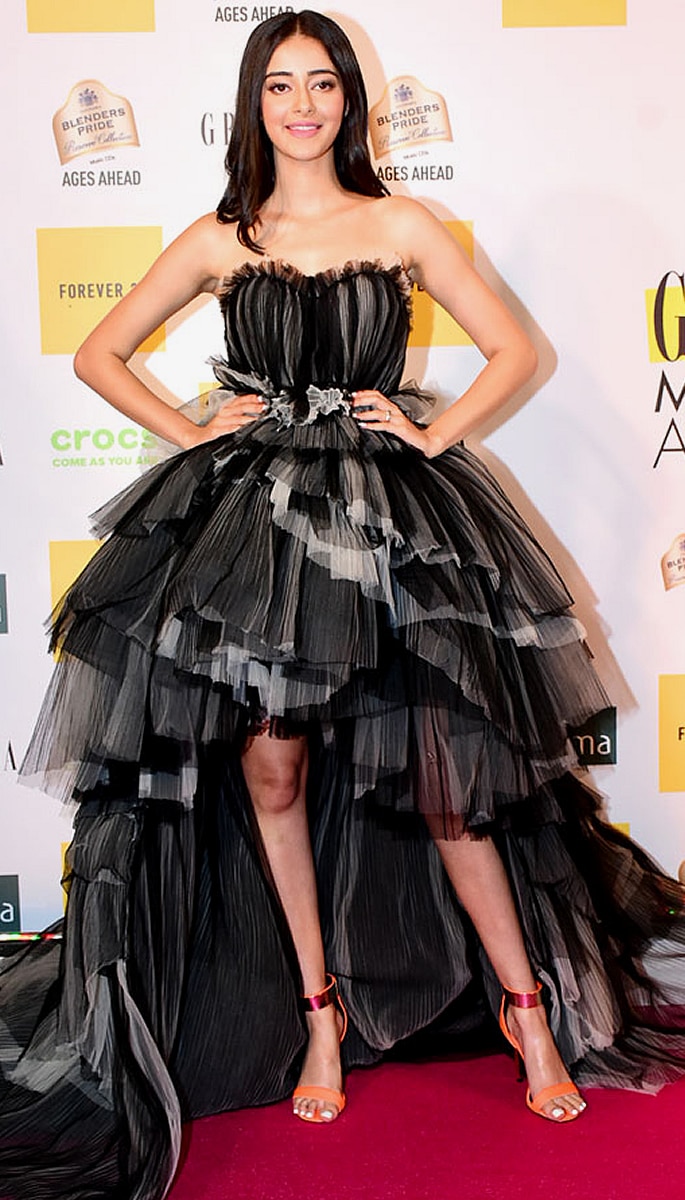 Actress Ananya Panday walked the red carpet to pick up the Nextgen Star of the Year Award and she wore a grey and black ruffled off-shoulder gown.

Ananya’s attire reminded viewers of Deepika’s look from Cannes. But Ananya looked lovely in her outfit by Galia Lahav.

Ananya was styled by Ami Patel to ensure her look was perfect. The actress completed her monochrome outfit with a pair of orange strappy heels.

Ananya, who made her Bollywood debut in Student of the Year 2 (2019), kept her hair and make-up simple. 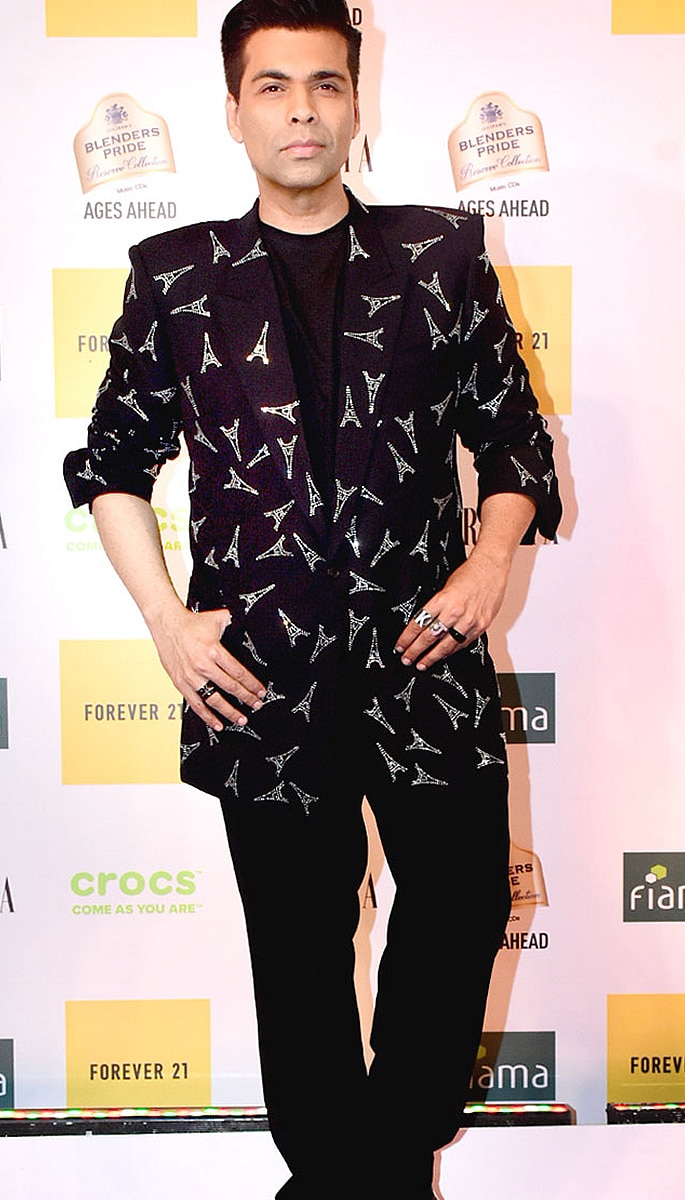 Diretcor and Producer Karan Johar was presented with the Honorary Millennial of the Year Award at the Grazia Millennial 2019.

He went for a smart casual look by wearing an all-black suit along with a black t-shirt. The filmmaker’s blazer featured an Eiffel Tower print, which gave a quirky touch to it.

Karan looked dapper in his outfit. On the work front, he has several films lined up including his period drama Takht. 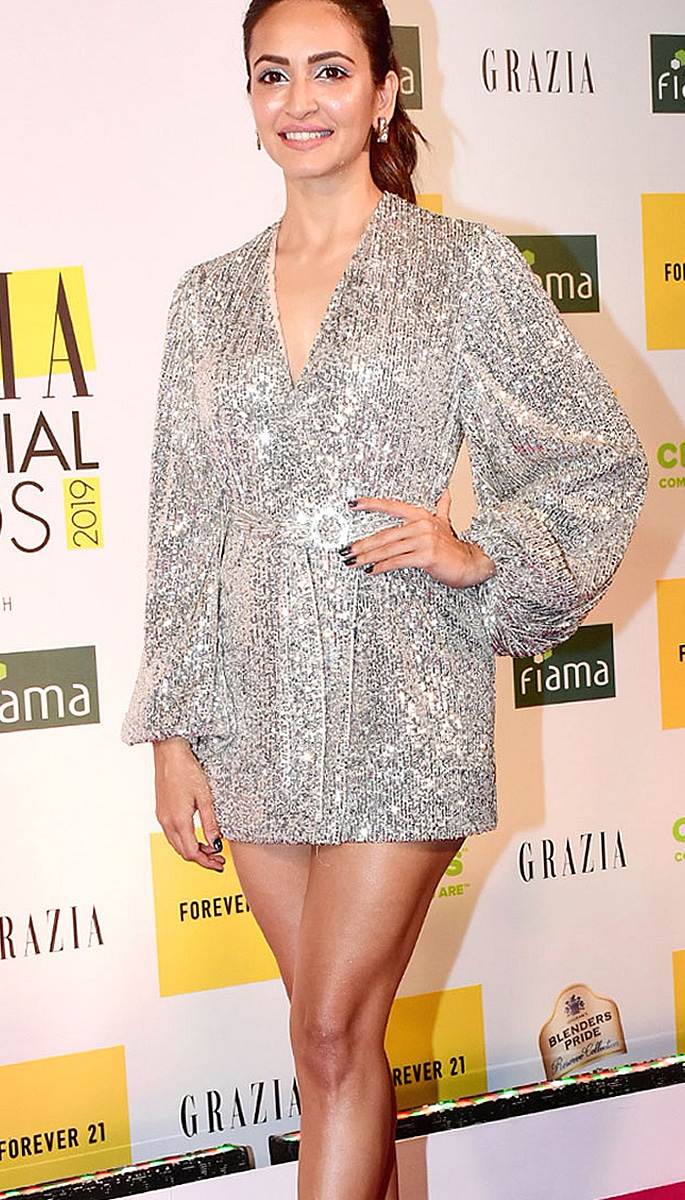 Actress Kriti Kharbanda went for a metallic, outfit which was sure to attract attention.

The actress opted for a sparkly silver sequin dress for the event and paired with a set of see-through heels. 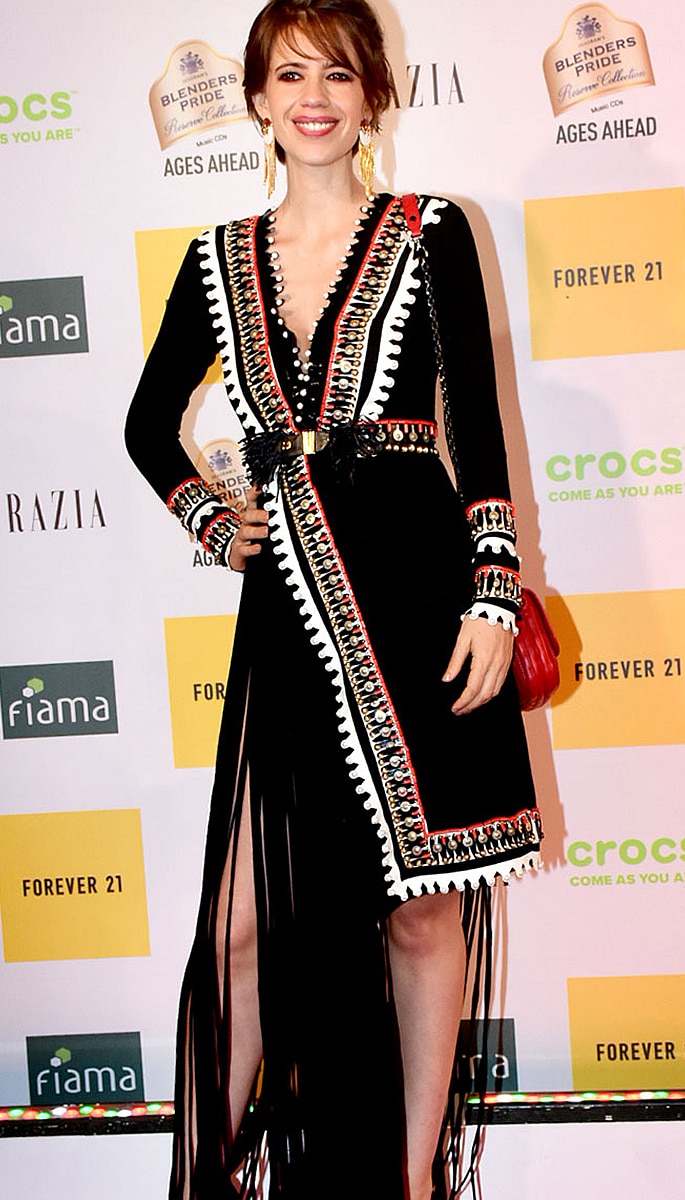 Gully Boy actress Kalki Koechlin made her walk down the red carpet during the Grazia Millennial 2019 event.

She went for a bold look by choosing to wear a black asymmetrical dress and paired it with some classy black stilettoes.

The actress is set to star in the second series of acclaimed Netflix show Sacred Games. 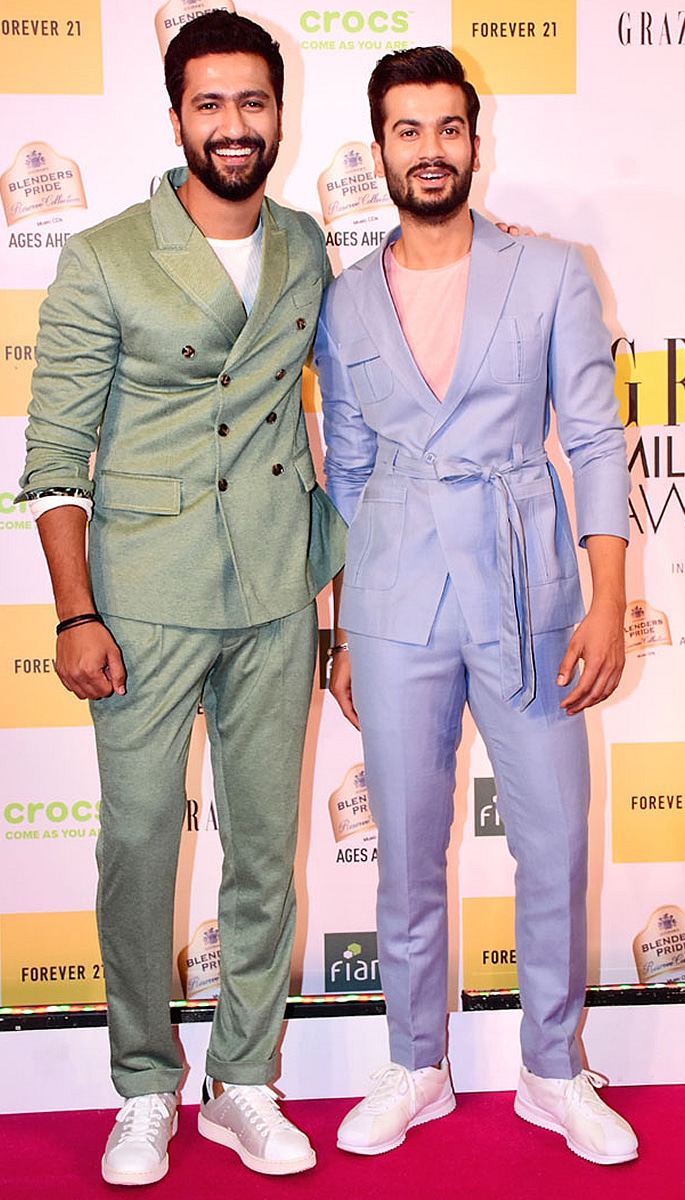 Actor Vicky Kaushal picked up the ‘Ages Ahead’ Performer of the Year Award and was supported by his brother Sunny Kaushal.

The brothers opted for a similar style by going for pastel shaded suits.

While Vicky wore an olive green suit, his brother Sunny decided to wear a light blue suit along with a peach coloured top.

The brothers kept their looks casual by wearing white trainers. 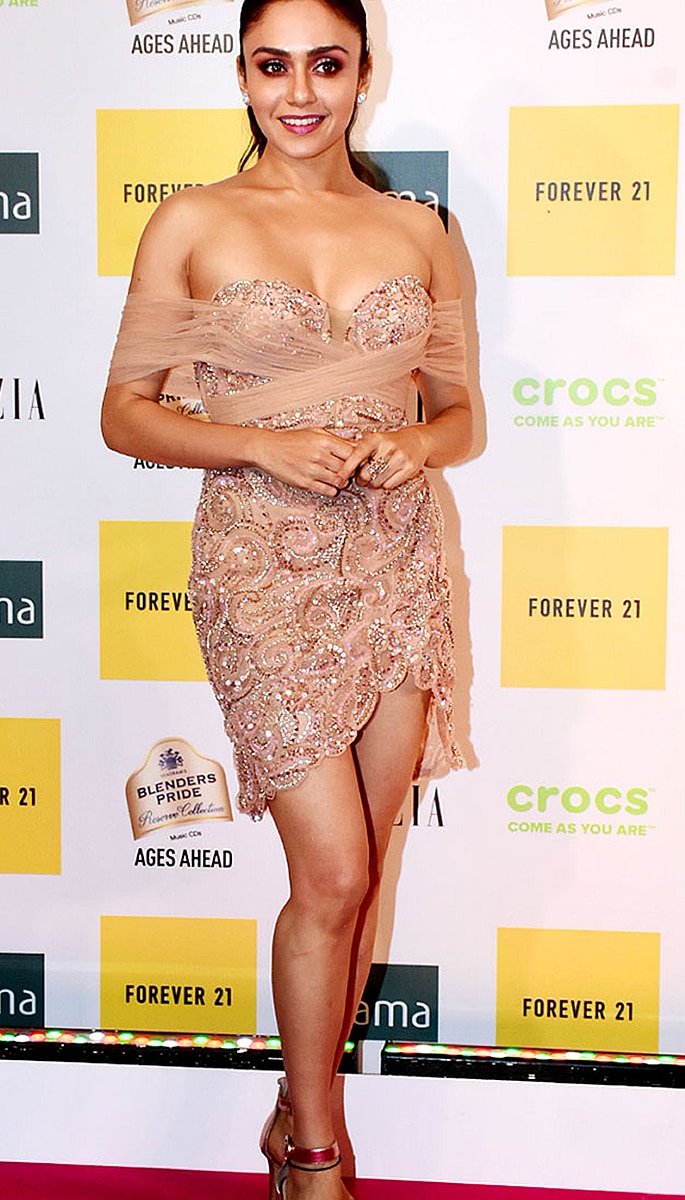 Amruta Khanvilkar chose to wear a beige off-shoulder embellished dress to walk the red carpet of The Grazia Millennial 2019 Awards.

The actress is best known for appearing in Bollywood and Marathi films. She featured in 2018’s Raazi, which starred Alia Bhatt.

Amruta has also appeared on TV. She was a contestant on the seventh season of dance reality show Nach Baliye (2015) where she went on to win. 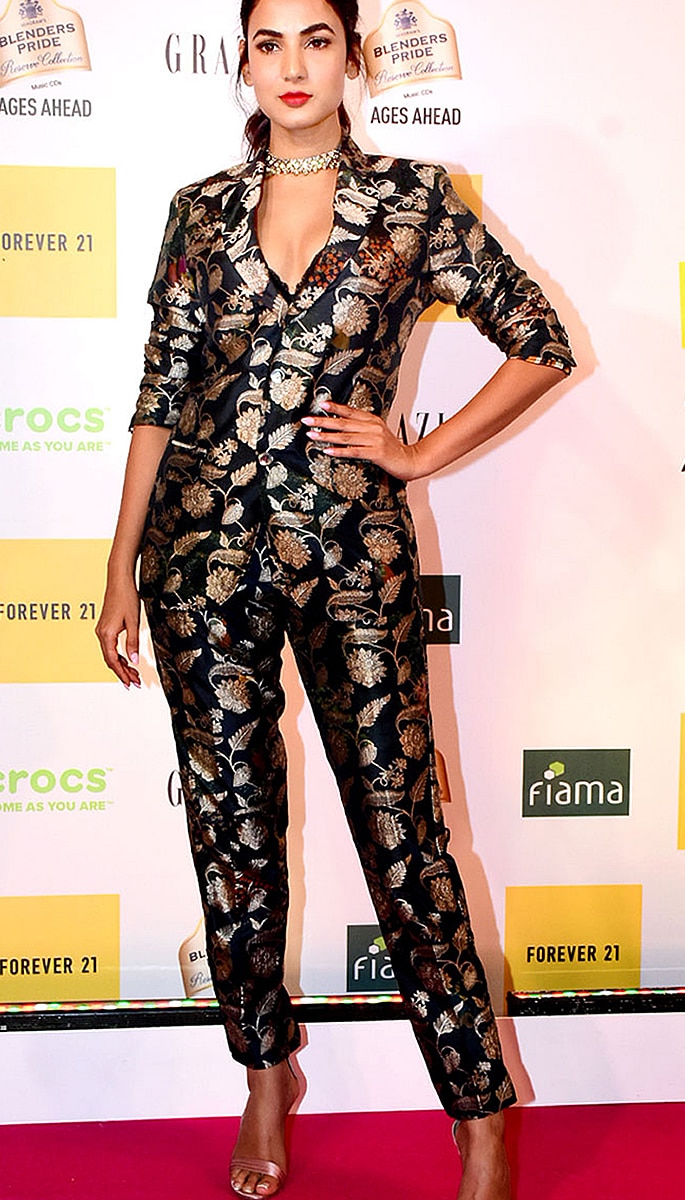 Model and actress Sonal Chauhan went for a black and gold coloured pantsuit, which was a look that was bound to turn heads.

She paired it with a kundan choker and gold strappy heels.

Sonal made her debut in the 2008 film Jannat opposite Emraan Hashmi.

Award winners also came from television, modelling and music. These Bollywood stars came out for the event looking their best.

While some outfits were bolder than others, they all looked great at Grazia Millennial 2019.

Dhiren is a journalism graduate with a passion for gaming, watching films and sports. He also enjoys cooking from time to time. His motto is to “Live life one day at a time.”
How Personalising Desi Bridal Lehengas are Becoming Trendy
The Evolution of Bollywood Fashion from Sarees to Dresses