Best Dressed Stars at Vogue Women Of The Year 2019

Bollywood A-listers, models, business leaders and more stunned on the red carpet for the Vogue Women of the Year 2019. We look at some of the best dressed.

"The vibrant hues in her blazer were matched in her makeup"

The third edition of the award show bought together an array of remarkable talent together under one roof.

In attendance was Bollywood celebrities, models, sportswomen, designers, filmmakers, business leaders and so on.

The star-studded event saw a parade of unique and stunning styles grace the red carpet.

We look at some of the best-dressed celebrities on the night. 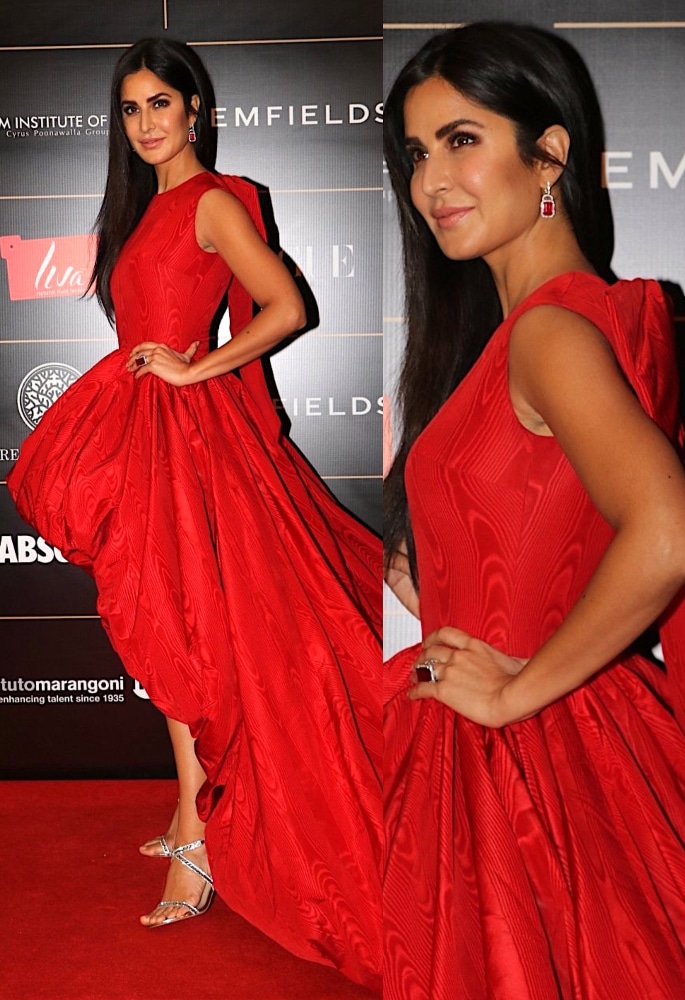 Katrina Kaif does not shy away from bold colours. She is a vision in both casual and occasional wear.

In this instance, it was Katrina’s Vogue Women of the Year debut and she certainly showed up in style.

Her vibrant red gown made heads turn at the event. The high-low hem design with a voluminous trail enhanced the flare of her dress.

A large bow at the back of the gown added a touch of femininity to her ensemble. To complete the look, Katrina opted for soft glam makeup paired with red lips.

Her choice of minimal jewellery, ruby diamond earrings and ring, complimented her outfit.

In addition, Katrina Kaif won the Risk Taker of the Year Award. 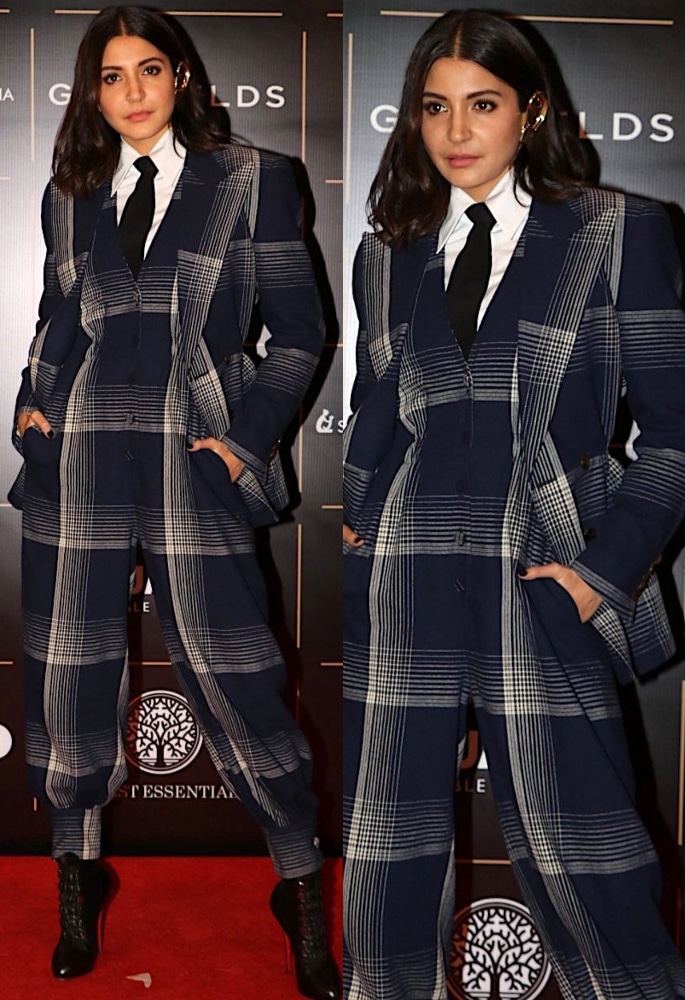 For her second appearance at the Vogue Women of the Year Awards, Anushka chose a plaid jumpsuit.

Her ensemble was given a formal approach with a powerhouse blazer, white shirt and tie combination. The blue and white jumpsuit was designed by Gucci.

To provide a relaxed fit to the outfit, the trousers were cuffed at the ankles to allow for a baggy top.

To complement her attire, Anushka chose a statement ear-cuff to increase the drama.

She opted for a fresh dewy base, nude lips and voluminous lashes. To ensure she put her best foot forward, Anushka paired the look with Christian Louboutin heeled boots.

There is no doubt that Anushka owned the red carpet like the boss lady she is. She went on to win the Style Icon of the Year Award. 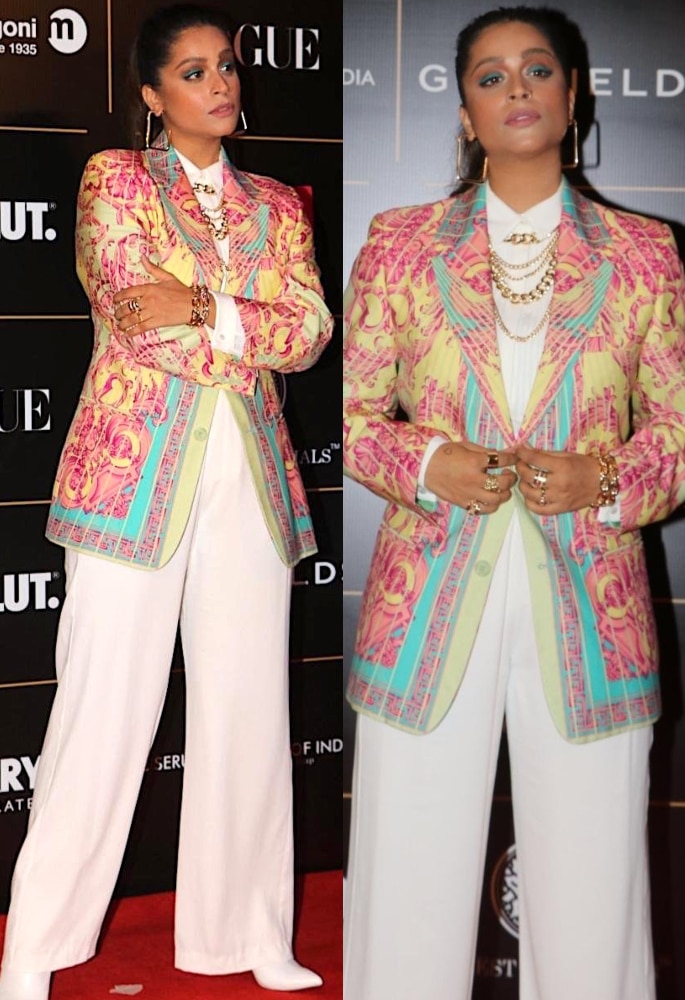 Another boss lady who chose to don a statement blazer was Lilly Singh. Her outfit comprised of high-waisted wide-leg white trousers with a matching collared shirt.

To add colour to the attire, Lilly chose to wear an eccentric pink, yellow and blue blazer.

The vibrant hues in her blazer were matched in her makeup. Blue eye makeup and pink lips were the choices on the night.

Lilly Singh enhanced the dynamic of her ensemble with the inclusion of multiple gold necklaces and large square-hoop earrings. 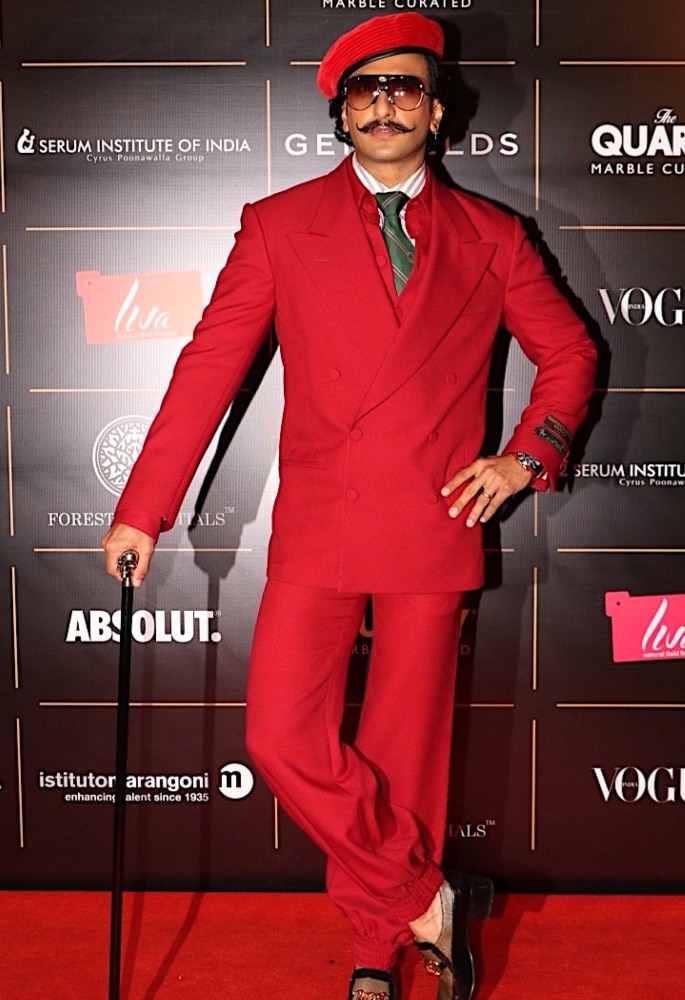 There is no denying the remarkable aesthetics of Ranveer Singh. He is a man of many talents and his unique fashion choices certainly top the list.

For the Vogue Women of the Year Awards he chose a bold red three-piece suit.

The double-breasted blazer with a striped shirt and green tie added to his sartorial appeal.

It would not be true Ranveer style without the inclusion of accessories. For the award show, he opted for a cane, sunglasses and a red beret.

He was certainly a vision in red and captured our hearts in his quirky red ensemble. Ranveer also went on to win the Man of the Year Award. 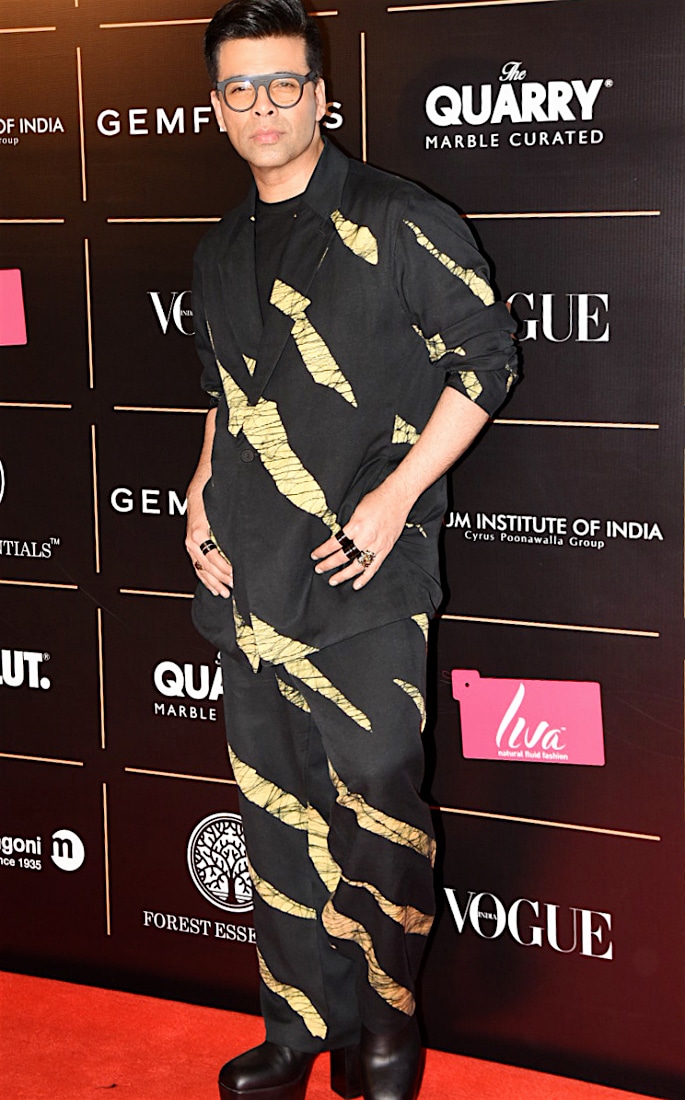 Another celebrity who has us hooked on his look was film producer Karan Johar.

He wore a black suit with a unique twist for the award show. The chic two-piece comprised of large gold stripes across the blazer and trousers.

The baggy fit allowed for a relaxed silhouette. Karan paired the set with chunky black boots which elevated his outfit. 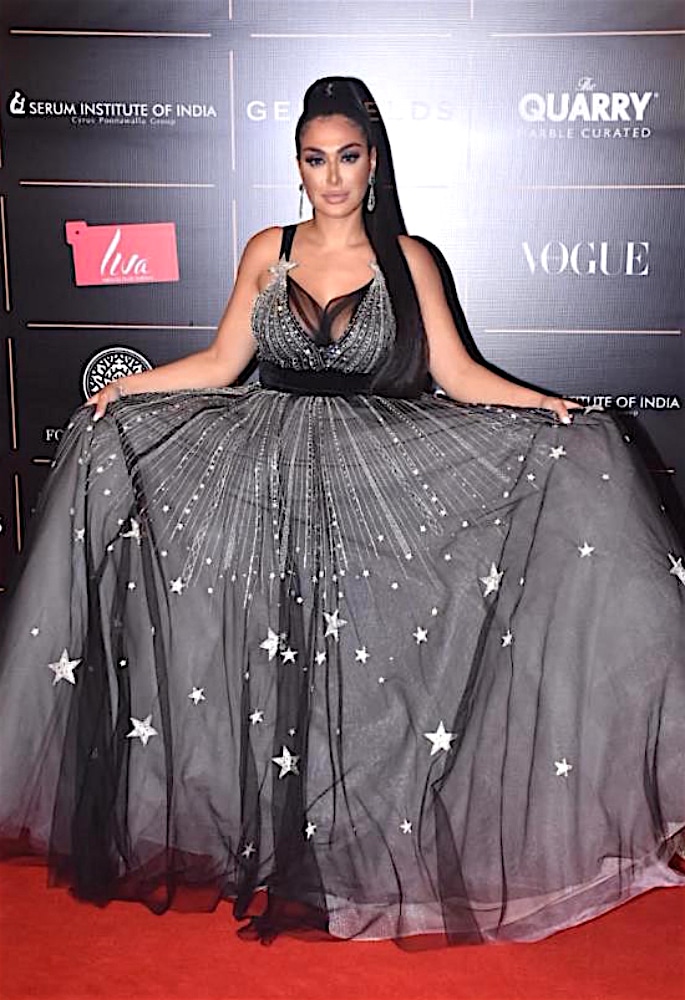 The founder of Huda Beauty took everyone’s breath away at the Vogue women of the Year with a stunning floor-length gown.

The black and white tulle set against the stars created the perfect romantic vision.

It featured a beautiful shooting star detailing travelling from the bodice down the hem.

The plunging neckline added a sexy touch to her ensemble, with a black band cinching her waist framing her figure.

For the award show, Huda had her hair sleeked back into a high ponytail with diamond earrings.

The beauty guru opted for a dewy base, striking eye makeup and nude lips. 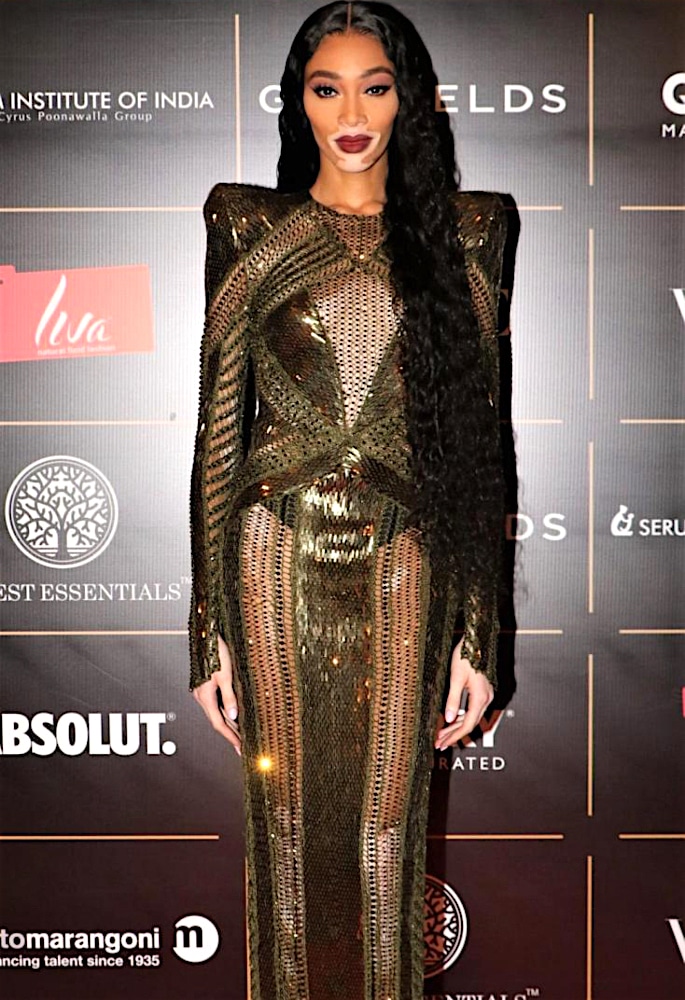 The dress entailed intricate cut-out detailing creating a sheer plunge-line neck as well as panels down the legs.

Winnie Harlow certainly dressed to impress and left everyone in awe of her look. 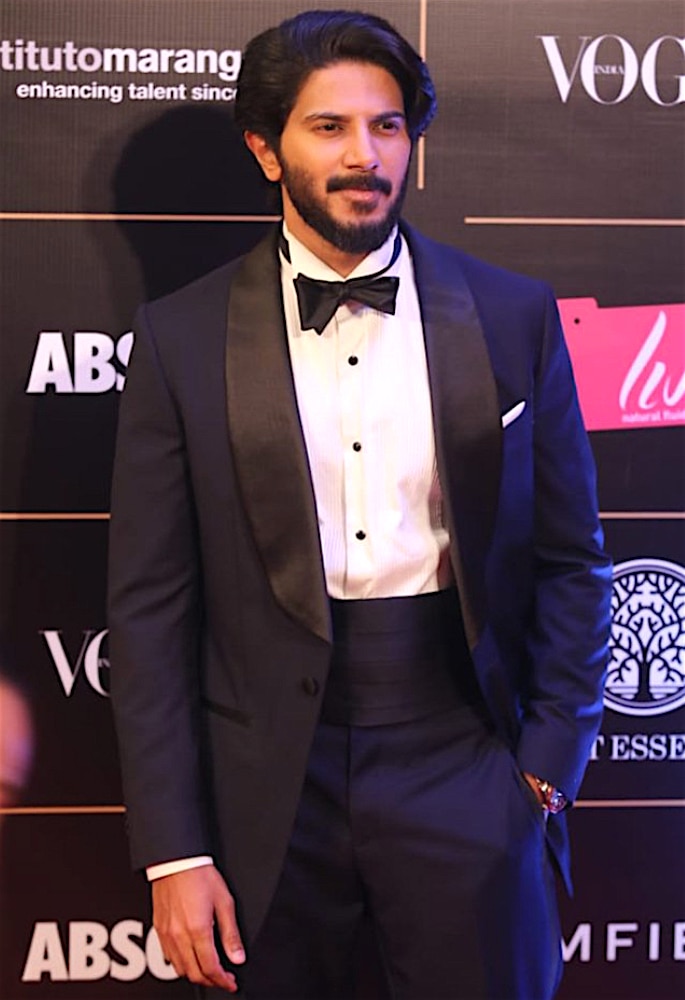 Indian actor Dulquer Salmaan looked dapper in a two-piece suit. For the Vogue Women of the Year, Dulquer opted for a classic suit which enhanced his sartorial look.

Despite some thinking, he may have played it safe with his choice, we appreciate his style.

His luscious hair was left to relax while his thick beard added to his style. One thing is certain, Dulquer looked extremely handsome. 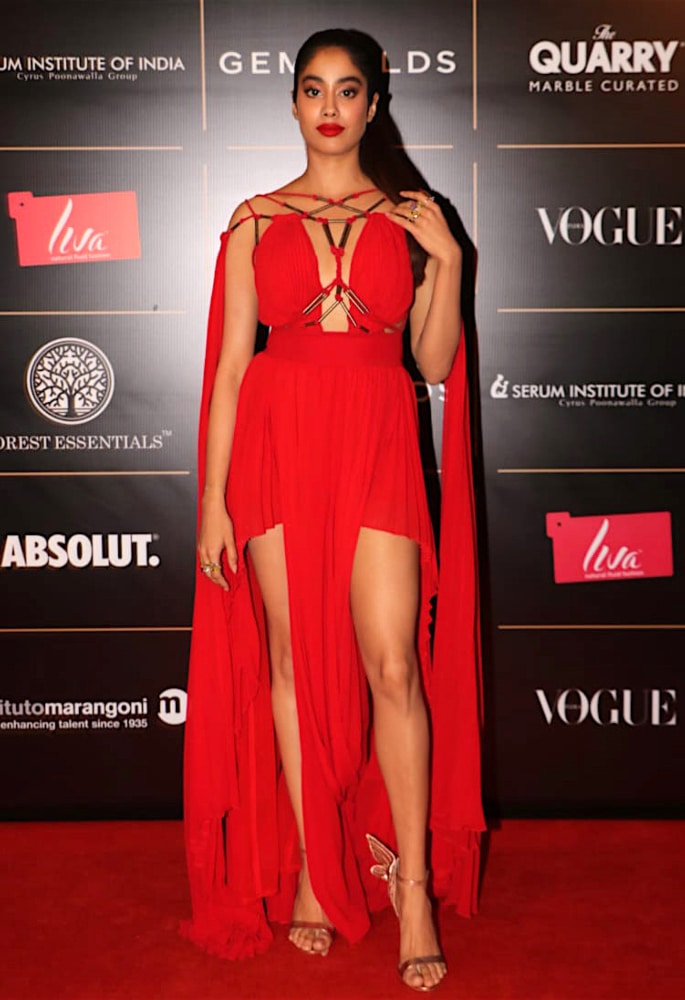 Another red statement outfit was worn by rising actress Janhvi Kapoor. She pulled out all the stops for her award show appearance and left her mark on the red carpet.

Janhvi donned an amazing red dress with a high-low hem design allowing her to show off her legs.

An enticing feature of the dress was the knotted detailing on the shoulders down to the neckline. The long shoulder drapes added to the beauty of the gown.

To complete the look, Janhvi decided to keep accessories simple with stacked rings by Kohinoor Jewellers.

She wore Sophia Webster butterfly heels to elevate her ensemble which was designed by Basil Soda.

For her hair and makeup, she opted for a sleeked high ponytail and bright red lips to complement her fiery red gown. 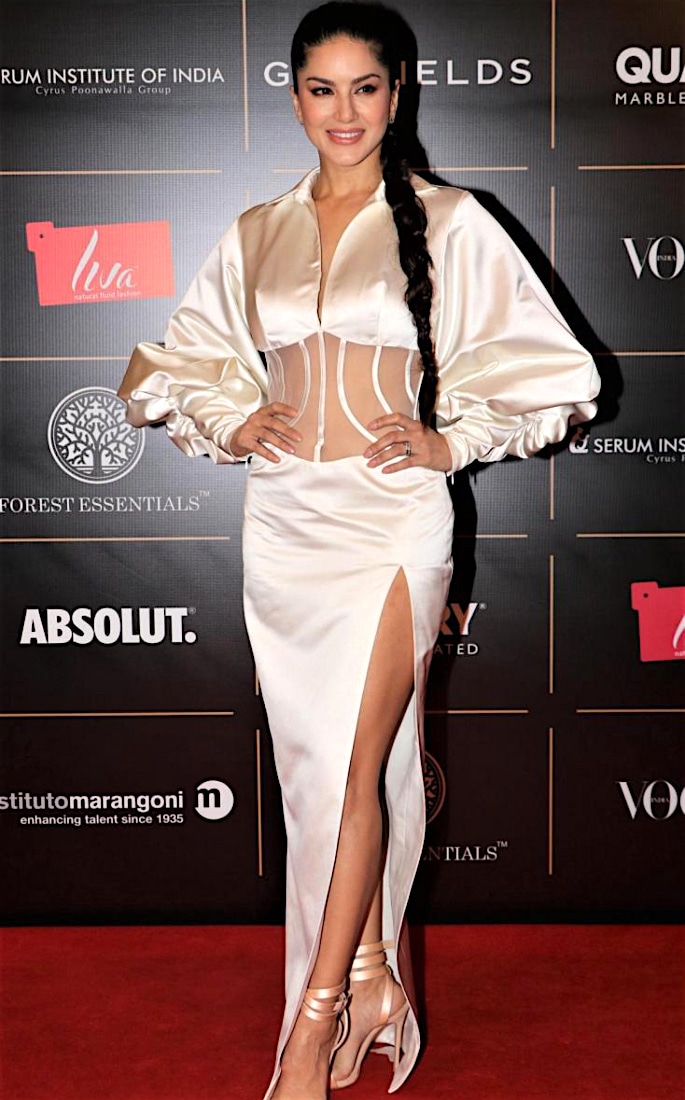 Sunny Leone never fails to impress with her alluring fashion choices. In this instance or the Vogue Women of the Year, Sunny wore a satin dress.

The dress was anything but boring. Its sheer corset bodice bought attention to her slim waist, while the bouffant sleeves added drama to the ensemble.

The thigh-high split allowed Sunny to showcase her toned pins.

Accessories were kept to a minimum with simple stud earrings and her hair was braided to create an effortless messy look.

These stunning stars graced the red carpet and certainly looked their best. It was evident that some of the ensembles were bolder and more risque than others, yet they all looking spectacular for the Vogue Women of the Year 2019.

How has Desi Fashion influenced Western Wear?
7 Beautiful Footwear Styles to Wear with a Saree