Desi fashion has forever been on the rise. It is no wonder that the Western world has taken inspiration and aimed to invigorate style.

Desi influence is prominent almost everywhere, from cuisine, architecture, lifestyle and fashion. There is no escaping this widespread phenomenon.

In particular, it spans across all aspects of fashion as designers are constantly drawing inspiration from Desi wear.

Fashion houses such as Christian Dior, Christian Louboutin and Alberta Ferretti have used Desi fabrics and prints for their creations.

Traditionally, Desi fashion is known for its intricate, colourful and bold style. The devil is in the detail with its stunning embroidery and diversity.

It is no wonder that Desi fashion has been a muse to the Western world. As the international fashion world continues to grow, Desi influence continues to remain noticeable.

We explore how the Desi aesthetic has transformed Western fashion. 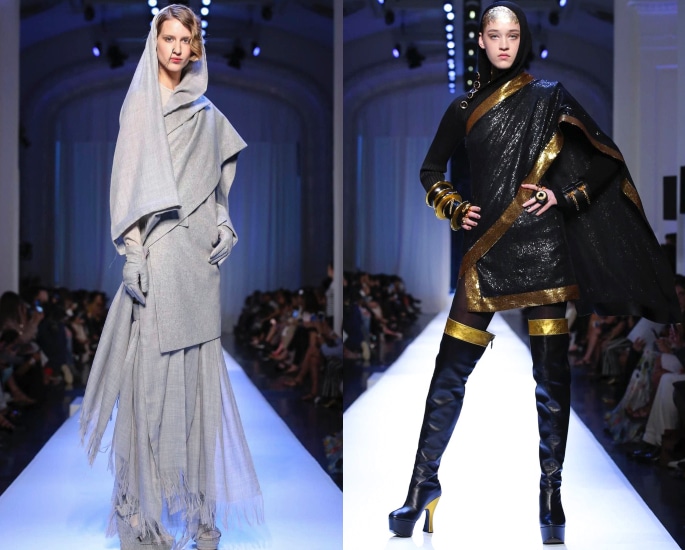 Take six yards of fabric and you have a saree. This traditional garment is worn by Desi women and is considered a staple piece in everyone’s wardrobes.

There is no denying the beauty and class of a saree. It is an epitome of grace and elegance.

Overtime sarees have transformed in style while remaining true to its original form.

One such designer who admires the saree is Jean Paul Gaultier, a French couture designer.

According to Elle, when asked how Gaultier views the saree, he said:

“With awe and admiration. The drape, the colours and the fabrics … sarees have made me dream since my first trip to India when I was barely 20.

“As an outfit, it is extremely generous; it blends well with all shapes.”

Sarees have proved to be a major fashion influence for the western world. Gaultier showcased his versions of the saree during the Haute Couture Fall/Winter 2017-2018 show in Paris.

He was asked about his inspiration for the fusion of winter wear and the saree. He explained:

“I imagined a woman who travelled around the world and had lost track of the seasons – she could very well have found herself in Gstaad, wearing a saree.

“With global warming, seasons do not have the same meaning anymore. It can be 20 degrees in winter and there can be snow in summer.

“The inspiration comes from the saree, but my reinventions are not literal.

“For instance, I have wool and cashmere versions (of the saree) in grey and black – not something that you would find in a traditional saree.”

As a result of western acceptance and appreciation, the saree has gained momentum in the west. 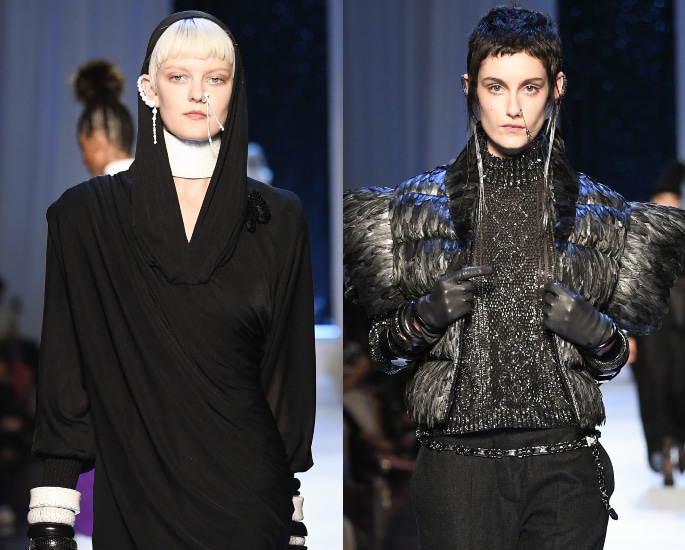 Jewellery is a major part of Desi fashion. It is worn extensively both daily and on occasions.

In this instance, the nose ring known as a nath is a popular piece of jewellery adorn by women daily.

Naths are also worn by brides on their wedding day. A nose ring is joined to the ear by a chain and enhances the bride’s beauty and charm.

They are available in an array of designs from studs to hoops and range from various sizes.

Historically, naths were prevalent during the Mughal Empire in the 1500s in India.

It took over thousands of years for this accessory to travel to the west and has become a mainstream fashion statement.

For example, during the Jean Paul Gaultier Haute Couture Fall/Winter 2017-2018 show in Paris, models wore naths on the ramp.

This type of Desi influence has extended to hand jewellery. 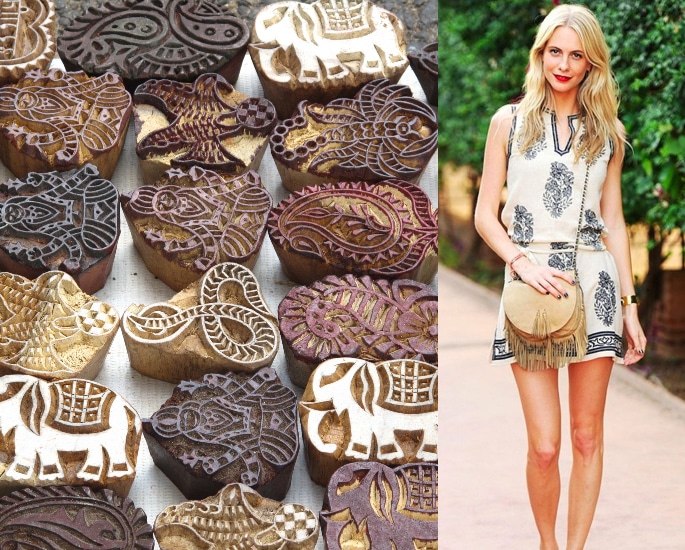 Folk prints from India have taken the fashion sphere by storm. They have appeared in Western fashion time and again.

Chanderi, Madhubani and Block prints have been merged with vibrant colours and prints to suit Western style.

In addition, the Pheran prints from Kashmir are popular and have been adapted to the Western palette.

This art of Desi influence has found its way into the crafted fabric used for bold t-shirts, shorts, trousers and dresses.

It is important to note; Indian folk print has maintained its originality while transforming the fashion industry. 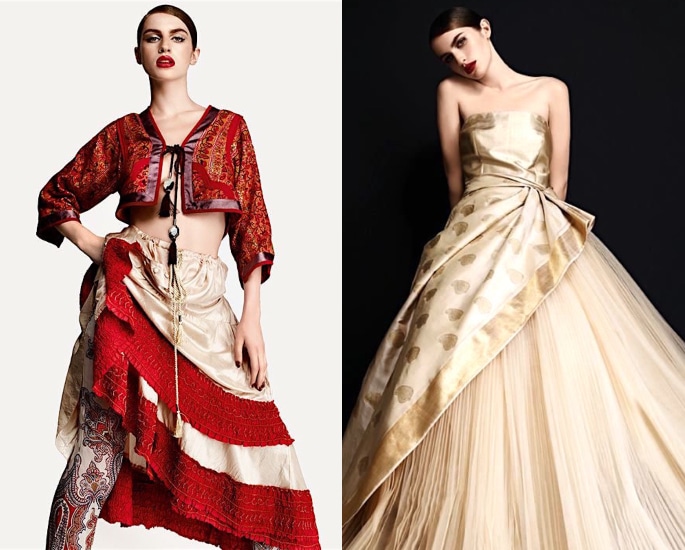 This aesthetic splendour are created from intricate weaving techniques which is unmatchable.

Thus, Western designers have delved into this craftsmanship and borrowed from South Asian provinces.

Designer brand, ETRO, combined Kashmiri jamawar and Gujarati bandhani to create a mesmerising ensemble. It consisted of a jacket, trousers and skirt.

The creative director of womenswear, Veronica Etro, explained her thought behind the process. She said:

“In a mixing of styles, I decided to blend (the fabrics) to create a new layered ‘Etro India’ look, uniting our common passion for textiles, colours and little details.”

Another designer who used Desi fabrics was the Italian fashion designer, Alberta Ferretti. She chose Kanchipuram silk to construct a beautiful gown.

Typically, Kanchipuram silk is used for sarees. Yet, she twisted this notion and experimented with her design. She states:

“I reinterpreted this beautiful fabric to realise something different from the traditional saree – I wanted to show (its) versatility, richness and allure.”

The design incorporates Kanchipuram silk for the bodice which travels down the side of the dress. The traditional gold thread work border is seen running across the skirt.

In addition, the belt detail made from the same fabric cinches at the waist creating a voluminous bottom. 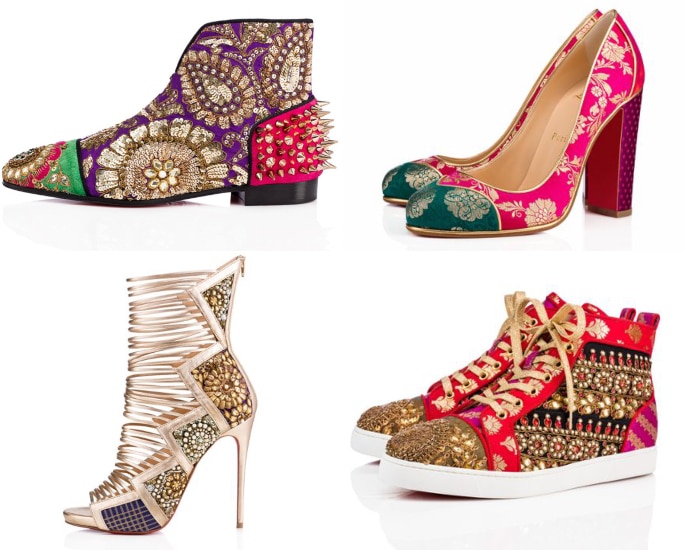 His designs are recognised by his signature red-lacquered soles.

In this instance, Christian Louboutin partnered with Sabyasachi for a project that bought together Paris and Kolkata.

Sabyasachi invited Christian Louboutin to his Kolkata residence where he showed him his private archive of sarees.

According to christianlouboutin.com, Christian upon witnessing his collection exclaimed:

“Let’s make the embroideries into shoes that can dance into the light.”

The beauty of rich fabrics, delicate embroidery combined with Christian’s bold and eccentric style is unprecedented.

This duo is a perfect example of East meets West and how Desi influence impacts Western wear.

“Indian handicraft is the best of the best in the world. The luxuriance of Indian workmanship is at the maximum. I would love the world outside of India to love it as I do.”

It is evident that the Desi influence on the fashion industry is unparalleled, particularly in Western wear. Demi fashion, fabrics, prints, vibrant colours and styles are like no other.

The beauty of fashion lies in the ability to recognise and appreciate artistic value and create without boundaries and limits.