Kate Middleton has fulfilled the hope of many as she chose to don traditional inspired outfits on a trip to Pakistan. She looked amazing while doing so.

"This ensemble was simple yet elegant"

Their five-day visit will allow for furthering relations and discussing issues such as climate change, education and security.

The Duke and Duchess of Cambridge set off on an eight-hour flight on British Royal Air Force. They landed in Pakistan at 9.30 pm at Nur Khan airbase in Rawalpindi. 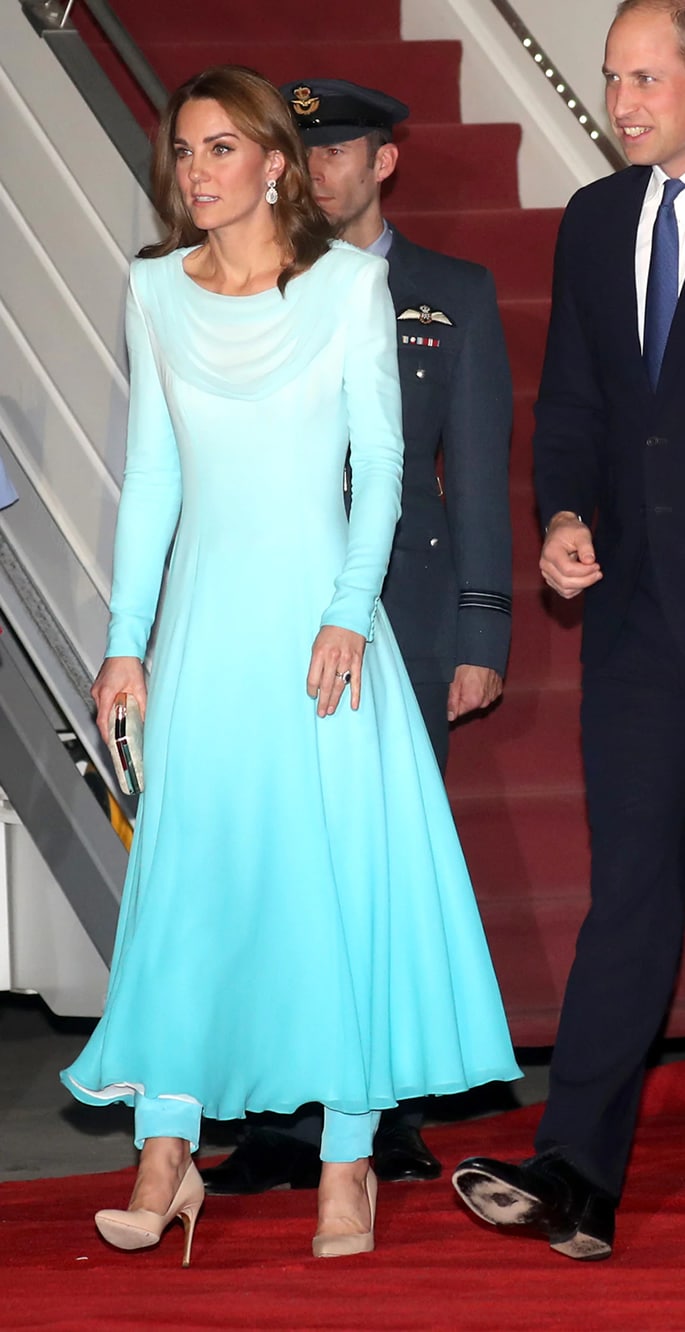 Her long dress with trousers delighted many as they hoped Kate would wear ethnic outfits. 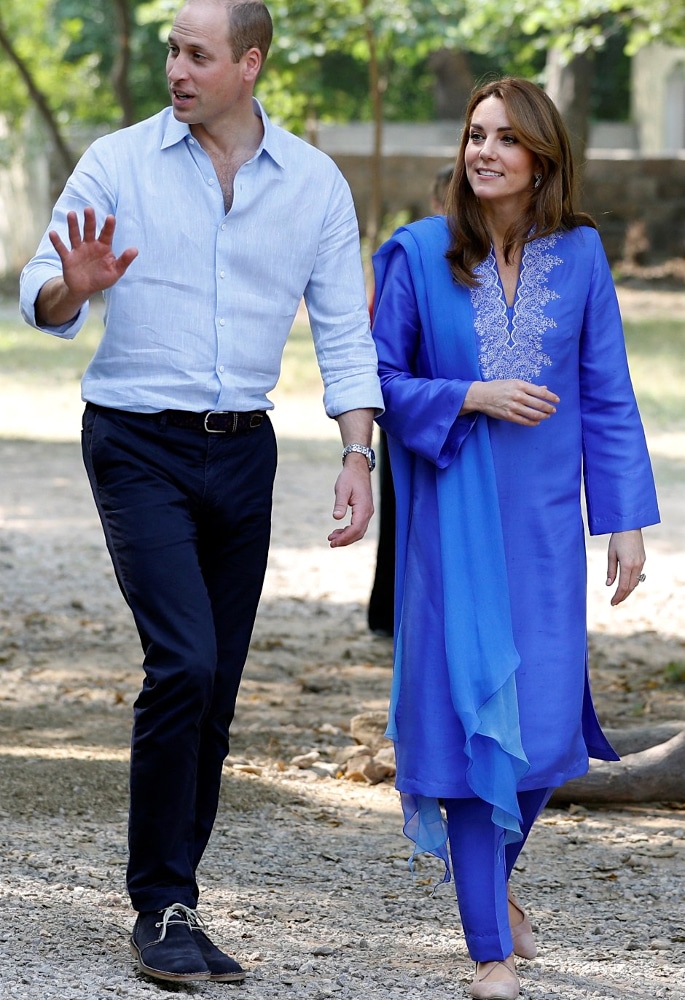 Their first engagement of the day was to visit the Model College for Girls in Islamabad on October 15, 2019. Kate Middleton wore blue salwar kameez by Pakistani designer Maheen Khan.

This ensemble was simple yet elegant with thread work embroidery around the neckline.

Seemingly Kate took inspiration from Princess Diana’s royal blue salwar kameez when she visited Pakistan. This touching tribute warmed the hearts of many around the world. 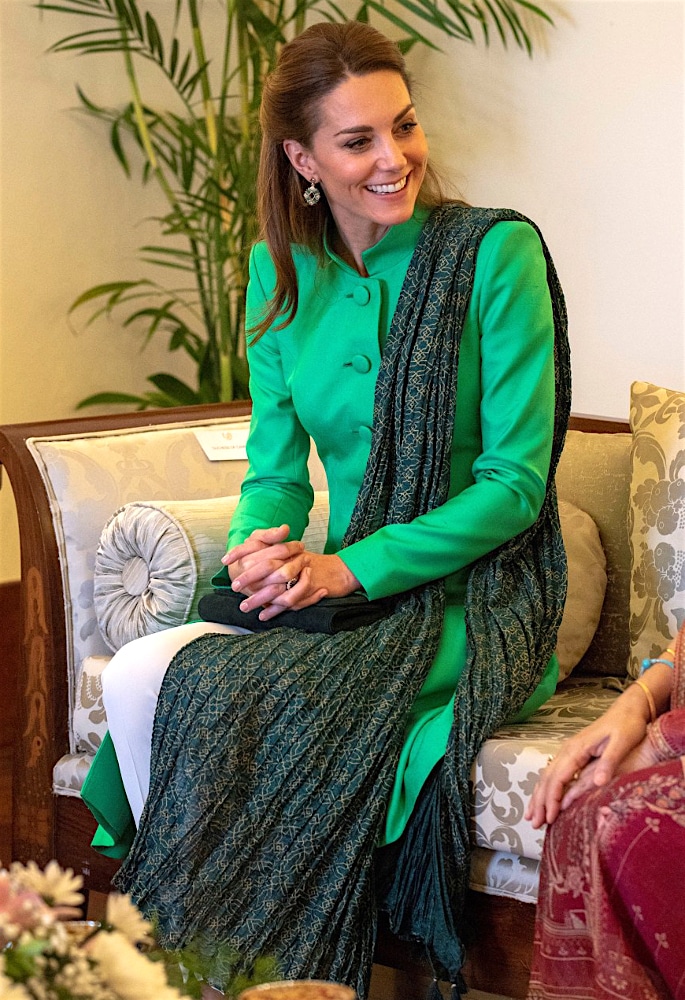 In this instance, Kate wore a turquoise dress by Catherine Walker, white trousers by Maheen Khan and a dupatta (scarf) by local brand Satrangi. She kept accessories to a minimum with earrings and a clutch bag.

To end the day, William and Kate attended a reception dinner hosted by Thomas Drew. Prior to their tour, Thomas stated how the visit will portray Pakistan as “a forward-looking country.”

Kate was a vision in green.

Her striking full-length emerald green gown was intricately designed with beads and sequences.

Kate completed the look with a matching dupatta which she draped over her shoulder. Prince William complemented his wife in a dapper green sherwani.

In addition to their stunning outfits, Kate and William arrived in a rickshaw. 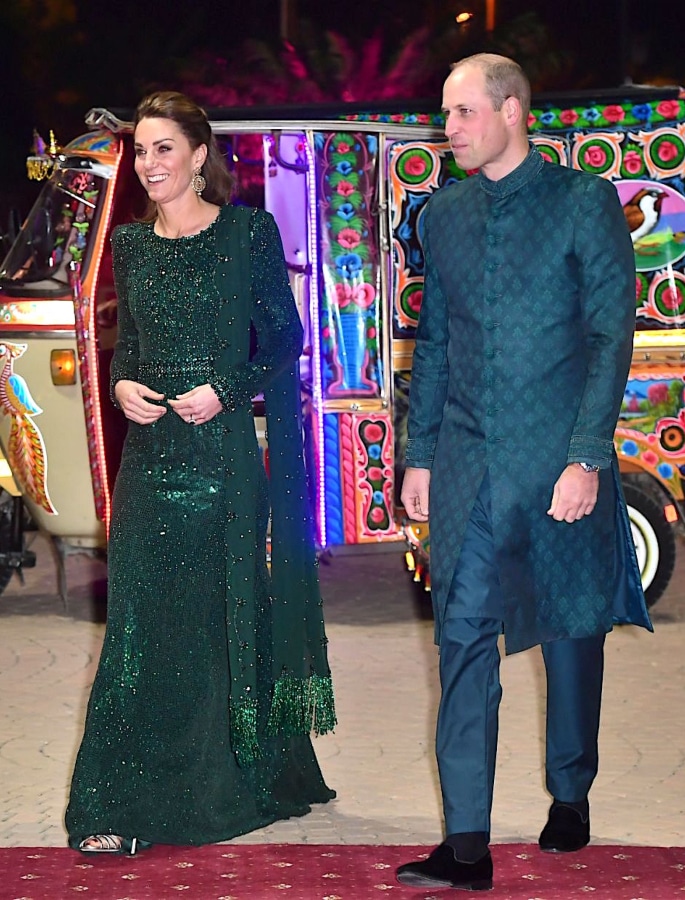 Details regarding the Duke and Duchess’s trip to Pakistan were limited because of security concerns.

Kensington Palace earlier in October released a statement describing the visit as:

“The most complex tour undertaken by the Duke and Duchess to date, given the logistical and security considerations.”

Kate Middleton has already won hearts with her traditional inspired outfit choices. We are sure she has a lot more in store for the remaining duration of their visit.