Barbican – From Bombay to Bollywood

This week the Barbican Centre has joined with the City of London Festival to offer up an insightful and broad exploration of Bollywood. The City of London Festival has in recent years increasingly focused on both local and international arts, producing exciting and varied cultural exchanges. This summer a spotlight has been cast on Indian and Swiss culture, and as a part of the Square Mile’s occupation by everything from literature to architecture the many cinemas and halls of the Barbican have hosted a week of classic films, as well as recent features with the hottest stars, alongside award-winning documentaries and talks from directors and noted critics.

Talks included lecture ‘Bollywood for Beginners’ from Cary Rajinder Swanhey.  Swanhey is currently the Head of Programmes at the Institute of International Visual Arts, having also headed the department for Diversity at the BFI and acted as Curator for both the South Asian Visual Arts and the National Museum of Photography, Film and Television. In the wide-ranging talk, Swanhey covered one hundred years of Indian Cinema, examining the relationship between Bollywood and Indian culture. 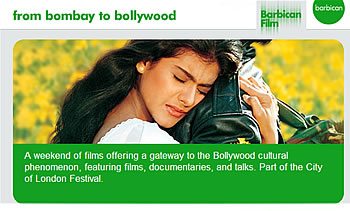 The weekend saw the screening of two documentaries, the lauded ‘Bombay Railway’ and ‘Before Midnight’.’Bombay Railway’ is an exceptional portrait of one of the industrial wonders of the world, following the people who live and die on the great railway, from the workers to the first female train driver. The documentary won the ‘Factual Programme of the Year Award’ at the Royal Television Society Awards. Director Gerry Troyna introduced the two-part documentary at the Barbican on Sunday.’Before Midnight’, like ‘Bombay Railway’, gave audiences a cross-section of India, but here it was from 1899-1947, and covered the pomp and prestige of state events and British soldiers to the harsh and often desperate realities of poverty and conflict, creating a cinematic history lesson of the Subcontinent. The documentary comprised of a collage of footage from the vast storage of the British Film Institute’s national archive.

The cultural showcase also included a time-line of film sensations, from classics to modern day hits. The 1957 ‘Bharat Mata’ (‘Mother India’), one of the first Indian films to be nominated for an Oscar, was shown on Sunday night. Nargis, who made roughly fifty films in her long career, won Best Actress at the Karlovy Vary International Film Festival for her starring role.

On Monday night the Barbican screened the 1975 action classic ‘Sholay’. Widely regarded as one of the most important Indian films of all time, it is still showing in Mumbai cinemas thirty years after opening.

The celebration of Bollywood’s rise ends with a screening of the 1995 ‘Dilwale Dulhania Le Jayange’ (‘Those with a Heart Will Take The Bride’). Praised as one of the most popular Hindi films of all time, this love story spans Europe and India as it follows the fates of two British-born Indian lovers who try to fight tradition and stay together. Starring popular pair Kajol and Bollywood heartthrob Shahrukh Khan, whose most recent film, Chak De India, picked up four awards at the International Indian Film Academy Awards, including best actor and film.

Nazhat is an ambitious 'Desi' woman with interests in news and lifestyle. As a writer with a determined journalistic flair, she firmly believes in the motto "an investment in knowledge pays the best interest," by Benjamin Franklin.
IIFA 2008 Winners
Salman and Shahrukh fight