“I have never been to Cannes and I always felt if I go it should be with a film."

Bollywood’s most loved directors have graced the 66th International Cannes Film Festival at a special gala screening of Bombay Talkies.

Bombay Talkies, which was already released on May 3, 2013, marking the official 100th birthday of Indian Cinema, has already been warmly received by Indian fans and critics alike for its touching take on some of Indian cinema’s fun and engaging subject matters.

In particular, it also comments on taboo subjects within the Indian community, highlighting how directors are now more and more eager to take risks in the films they choose to make.

The Cannes screening marked a prestigious moment in the history of Bollywood. Not only has it propelled Indian cinema onto a recognised international platform, but it also highlights the extraordinary achievements of the Indian film industry that has now reached its 100th year. 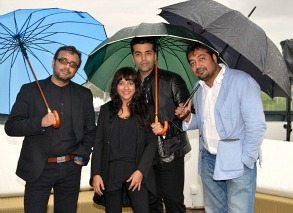 In a press conference on Sunday before the midnight screening, the Bombay Talkies’ directors could not contain their excitement:

“[I am] extremely honoured that our omnibus endeavour has been officially selected at Cannes. Can’t wait to walk the red carpet with Dibakar, Anurag and Zoya,” said Karan.

The short films, which average at around 30 minutes each, tackle very different subjects related to Indian and South Asian lifestyle.

Karan’s piece sees Rani Mukherjee, Saqib Saleem and Randeep Hooda in the main roles. Rani sees herself caught in a love triangle with her husband Randeep and her gay intern, Saqib.

Fellow director, Zoya added at the press conference: “I have never been to Cannes and I always felt if I go it should be with a film. Things worked out even better as it’s not just a film but also three friends – Karan, Dibakar and Anurag – with me. It’s going to be a blast.”

Zoya’s short film comments on a Billy Elliot-esque story of a pre-teen boy played by young talent, Naman Jain who wishes to give up sports in favour of his passion, dance. His idol is Katrina Kaif. The film comments on the role that music, dance and celebrity play in Bollywood films and how they have become an integral part of Indian lifestyle: 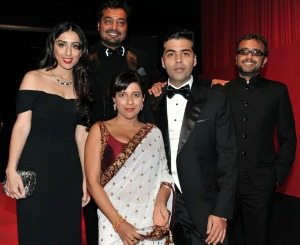 His short film sees Nawazuddin Shah, who is struggling to support his family be selected to play an extra in a big movie.

Anurag Kashyup offers a touching portrayal of a son who makes it his mission to meet idol Amitabh Bachchan as his father’s dying wish. Anurag has rapidly become a familiar face at Cannes, as his film, Gangs of Wasseypur was screened the year before.

Bombay Talkies has fared well in India so far. Each director was allocated Rs 1.2 crores or £145,000 each for their respective parts. In its opening weekend, the film‘s takings were in the region of Rs 5.15 crores.

Interestingly, producer Ashi Dua, spent almost three years trying to make Bombay Talkies into an on-screen. She also had to put up a significant fight to ensure that the film would screen at Cannes as well:

“I am happy that the Indian audience loved it and I am proud to now take it to the international crowd. They don’t usually allow a premiere on an already-released film. Cannes officials kept telling us not to release the film as they wanted to give us a world premiere,” Ashi said.

“I showed them the film. I told them how May 3 was a symbolic day for Indian cinema and almost begged them to allow me to release the film in my country. I told them we will show the film in other countries only after the international premiere at Cannes. They understood the emotions and agreed.”

“I would have let go of Cannes if they didn’t allow us to release it here. For me India is more important,” she added.

The midnight showing of the film, which took place at the Palais des Festivals, saw the red carpet light up with Bollywood stars Vidya Balan, Malika Sherawat and Cannes-veteran Aishwaryia Rai Bachchan dazzling in their elegant ethnic dresses.

Aishwarya made her appearance minus Aaradhya in an elegant black sari with golden embroidery.

Malika stunned in a black and ash coloured Dolce and Gabbana gown, while Vidya kept it simple and demure in a maroon and gold sari. Actress Nimrat Kaur also donned a black sari as she arrived with Irrfan.

With much more to come from Indian cinema at the festival, Bombay Talkies is just one of four films that will be shown at the 66th International Cannes Film Festival.

Aisha is an editor and a creative writer. Her passions include music, theatre, art and reading. Her motto is “Life is too short, so eat dessert first!”
Aurangzeb ~ Review
How much do you love Bollywood?