In the last episode of ‘Meet the Khans’, Amir and Faryal visit their new house in Dubai and discuss their hopes for the future.

The final episode of Meet the Khans: Big in Bolton sees Amir and Faryal visit their new house in Dubai, attend the Global Soccer Awards and discuss their hopes for the future.

The episode begins in Dubai, where Amir and Faryal have finally picked up the keys to their five-bedroom mansion.

Faryal states that she is taking control of the interior design. She says she wants the Dubai house to have more “bling” than their Bolton home.

She says: “There’s no way I’d let Amir choose the interior design for this house.

“So I want it tasteful but colourful, he’d just want it plain with two chairs and a sofa.”

Amir is in agreement, saying to Faryal:

“The last thing I want to do is pick something out and you’re like, ‘Amir that’s your fault, you did this, you did that’, I’ll get the blame for everything then.”

Amir admits he likes the location of the house. It is peaceful and quiet, despite being a short drive from downtown Dubai.

According to the designers, the interior of their new holiday home will take six weeks to complete. Amir jokes:

“As long as it’s quicker than the wedding hall because they’ve been saying ‘a year, a year’ for the past six years and nothing’s happened there.”

However, Faryal assures him: “I’m fully in control of this so it will be a lot quicker.”

Faryal questions Amir on an article about it, saying: “I didn’t know, thanks for telling me.”

Amir reveals that he and Kell Brook are “in talks” of organising a fight, saying: 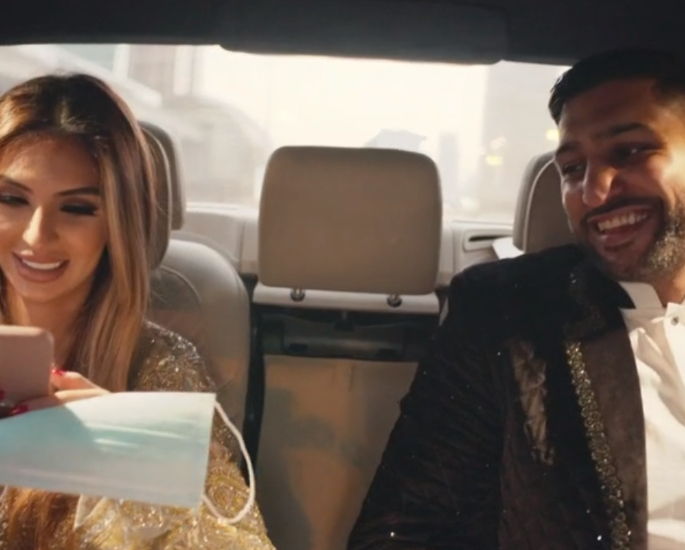 While in Dubai, Amir and Faryal attend the Global Soccer Awards, which prompts a debate over how long they take to get ready. Amir says:

“When I get ready and get my black tie on, it takes me literally five minutes.

“Whereas Faryal, oh my God.”

Faryal struggles to find an outfit to wear because nothing fits her. She receives no help from Amir, who suggests that she wears jeans before telling her to “wear whatever”.

Eventually, she chooses a gold, detailed jacket and puts a stunning outfit together, and the pair are glad to be able to attend an event after so long.

Amir revealed he met with Ronaldo and the experience left him starstruck.

“Ronaldo came over and said ‘Amir, how are you’, and I was like ‘he knows my name, wow’, and my friends always say to me ‘you don’t know how big you are as well, you are the star in your own way’.

“It’s just nice to be appreciated by other sportsmen who are at the highest level of sport – and he’s got a bigger smile than me!”

Back in Bolton, Amir and his friend are discussing a potential fight between him and British rival Kell Brook.

According to Amir, the fight has been on the cards for “years and years”. He said:

At home, Amir and Faryal have some quality family time playing with their children.

According to Amir, when he is not boxing, he is a family man. 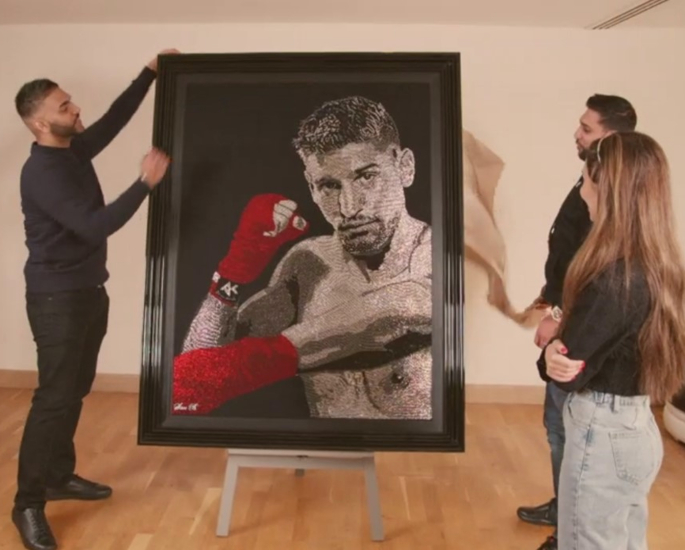 Amir and Faryal also meet with San B, an artist who makes portraits out of Swarovski crystals.

The Khans met with San in London in the third Meet the Khans episode. Now, he is revealing the finished product.

San spent over 500 hours on the piece. It is complete with over 40,000 crystals, with Amir adding the very last one.

In disbelief, Amir describes his own portrait by saying: “It even looks like me.”

The piece will appear in an online auction organised by the Amir Khan Foundation.

At home, Amir and Faryal discuss their lives and their hopes for the future.

After joking that their sex life is now gone, Amir says:

“I think it’s always good to remind ourselves that we’re still lovebirds, we still enjoy having that alone time, it’s like the early days, the days where we started to date.”

Amir and Faryal also ask each other where they would like to be in five years.

“I think I’d like to be retired from boxing, I will be then promoting boxing out in the Middle East in different regions.”

“I want to see my kids grow up, I want to spend time with my family.”

Amir also tries to motivate Faryal, by telling her that she should be at the top of her makeup game in five years.

Faryal also jokes about how the kids will look after Amir while she is working, and brings him back to reality when he is surprised the family will accompany him on future work trips to Dubai.

She reminds him: “That’s why we got a house in Dubai!”

The series ends with Amir and Faryal discussing the possibility of renewing their wedding vows.

They also make sure that, no matter how busy they get, they will always have time for each other.

Louise is an English and Writing graduate with a passion for travel, skiing and playing the piano. She also has a personal blog which she updates regularly. Her motto is "Be the change you wish to see in the world."
Saba Qamar Questions why ‘Sexify’ is Trending in Pakistan
Zareen Khan Speaks about turning Lesbian on Screen