The fourth episode of ‘Meet the Khans: Big in Bolton’ sees Amir and Faryal open up about how online trolls and hate comments affect them.

“People pick up on every little thing.”

The fourth episode of Meet the Khans: Big in Bolton sees the famous couple discuss the trolling they are subjected to as well as some of the things they have been called.

It packs a punch from the beginning at Amir Khan’s Bolton boxing club.

Amir enjoys helping young people and wants to help others in the same way boxing gyms helped him.

Amir explains that, although his family had nothing, he still worked hard to give himself a better life.

He also discussed the stigma around boxing within Asian families. Amir said:

“Being an Asian boxer, I think I definitely have inspired a lot of the youngsters, because normally our families would not support the children into a sport like boxing.

“But because I went to the Olympics and I won a world title, I think that’s when families realised that ‘wow, boxing is a good sport, and we should put our children in’ – if they like it, why not motivate and help them and support them.”

Meanwhile, Amir’s influencer wife Faryal Makhdoom is at home deciding what she wants to promote.

On a video call with her friend, Faryal jokes about her sex life. She says she and Amir are “boring” now they have three children.

Faryal also discusses declining a request to promote some skin lightening cream because she is against it.

According to Faryal, as an Asian woman, she disagrees with the idea of promoting something that makes your skin lighter.

She said: “I never want my children growing up thinking that it’s okay to promote whitening creams.

It’s wrong – you should be proud of your skin colour and it’s just not something I support.”

Faryal also took some pictures for her social media, with her daughter Lamaisah as the photographer. 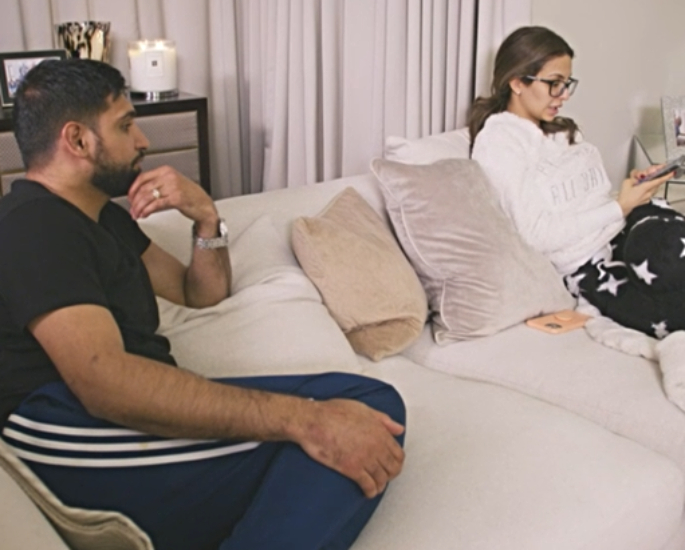 While at home together, Amir and Faryal talk about Amir’s frustrations over spending so much time out of the ring.

According to Amir, it is easier to train abroad because he has a routine and can go into “work mode”.

Amir opened up about how it can be “depressing” going from training every day and fighting in front of crowds to a sudden stop.

He also said that the abuse he gets from trolls makes the situation worse. He said:

“I went the other day to one of them cry therapy places, and the amount of comments I was getting like ‘wow, you’re overweight’, you’re this you’re that and I thought to myself ‘yeah, because I’m not really in intense training’.”

He added: “People pick up on every little thing.”

Amir also says he prays to motivate himself and goes running to help his mental health.

While training with a friend, Amir talks about how hard it is to stay in shape off-season.

According to Amir, people expect him to have a six-pack all the time, and he hates when people say that he has put weight on.

However, he believes it is important to still have mental strength, because “boxing is all in the mind”.

While Amir is training, Faryal and her friend are preparing for the launch of Faryal’s makeup brand. The pair discuss trolls and some of the hate comments Faryal receives.

As an influencer, Faryal says she wants to know people’s opinions on her look.

However, she does not want to be called a “f**king sl*t”.

Faryal is visibly upset from the frequent trolling she receives online. She said:

However, Faryal says that people bringing up problems she and Amir have had and moved on from hurts the most. 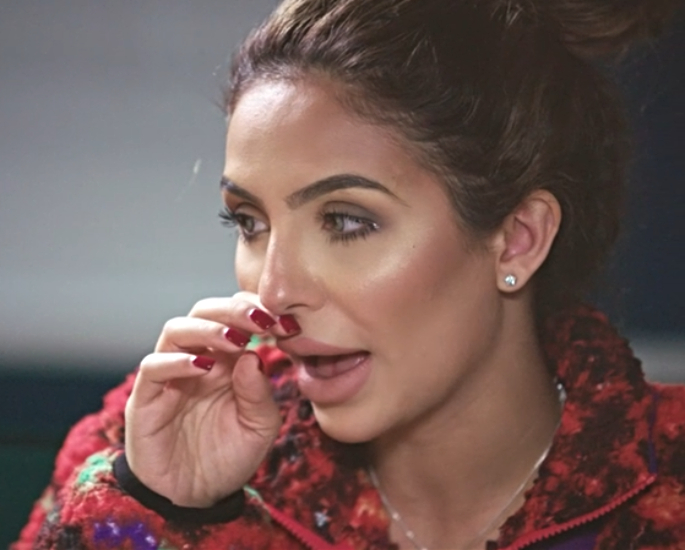 Faryal also sees a therapist and breaks down in tears explaining the effect trolling has on her.

“It does upset me – I do have a thick skin, I can put up with a lot of abuse online, but putting up with things that are said about my husband, my family, my relationship, my children – it kind of hurts.

“You look at celebrities and you look into their lives and you say ‘wow, she has everything, she has a famous husband, she has children, she has money’, and there is that jealousy and envy that comes with it too.

“But realistically I’ve been through so much sh*t that you have no reason to be jealous.”

The fourth Meet the Khans episode rounds up with Amir and Faryal discussing answers to questions from Faryal’s followers.

They agreed their last argument was because Amir’s breakfast was five minutes late. Amir also expressed his annoyance at Faryal when she uses her phone while he talks to her.

However, Faryal revealed she loves how her husband has managed to make a name for himself.

The Khans also agree that they have equal love for each other.

The next episode of Meet the Khans features a family trip to New York, and Amir sees a nutritionist to help with his training.

All episodes of Meet the Khans: Big in Bolton are available to stream on BBC iPlayer.

Louise is an English and Writing graduate with a passion for travel, skiing and playing the piano. She also has a personal blog which she updates regularly. Her motto is "Be the change you wish to see in the world."
Malaika Arora sparks Marriage Rumours with Engagement Ring
20 Famous Bollywood Police Characters in Movies