The perfect Aishwarya Rai has upped her fashion game again on the global stage, as she meets with French president François Hollande in Delhi.

She opts for a red saree with bold prints, designed by Swati and Sunaina.

She opts for a red saree with bold prints, designed by Swati and Sunaina and meticulously crafted in Banaras.

A source close to the designers tells IANS that the beautiful saree is one of a kind, being made from natural fibres and dyed with eco-friendly methods.

The intricate Indian weaving technique of ‘kadhuwa’ is also used to create the garment, which is all the more fitting to welcome the head of a foreign state.

Pairing it with Polki jewellery, Ash mesmerises everyone at the all-important event and proves after all these years, she is still the ultimate beauty queen!

Indian entrepreneur Suhel Seth and the Élysée Palace have both tweeted photos of meeting the former Miss World:

With the charming AISHWARYA and Elsa Zylberstein at the lunch for @fhollande… pic.twitter.com/r90egj1bX4

Aishwarya has a close connection with France, notably with her stunning commercials for cosmetics brand, L’Oréal, and regular appearances at the Cannes Film Festival.

She is also a proud recipient of ‘The Ordre des Arts et des Lettres’ (Knight of the Order of Arts and Letters) in 2012, for ‘her invaluable contribution to the world of cinema and the development of Indo-French cooperation in cinema, art, and culture’.

She joins other famous Indian figures, such as Shahrukh Khan, Anurag Kashyap (director) and Bharti Kher (artist) in receiving the prestigious civilian award. 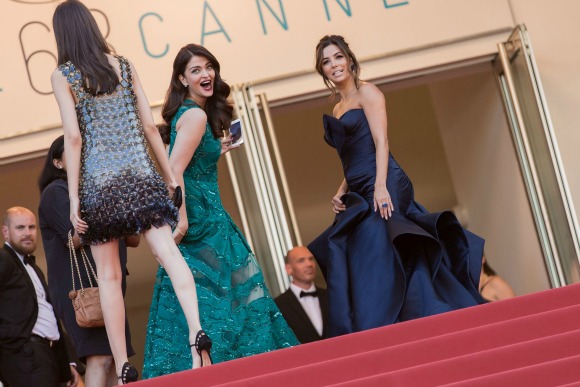 Hollande is currently on a three-day visit in India, during which he has signed a defence deal with Narendra Modi for India to purchase 36 Rafale fighter jets to modernise its military.

The French President has also attended India’s 67th Republic Day parade in Rajpath to wrap up his tour.

Scarlett is an avid writer and pianist. Originally from Hong Kong, egg tart is her cure for homesickness. She loves music and film, enjoys travelling and watching sports. Her motto is “Take a leap, chase your dream, eat more cream.”
Prince Narula wins Bigg Boss 9
Akshay Kumar is Hero of India in Airlift